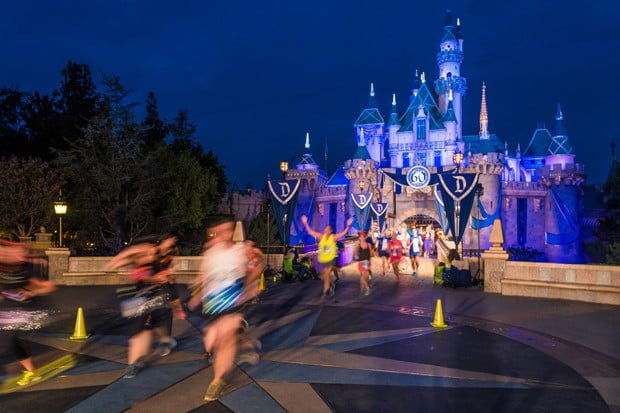 For 2016 Disneyland Half Marathon Weekend, Sarah ran the 5K and I ran the Half Marathon. We picked up our race bibs on Thursday afternoon before heading to Disneyland and checking into Anaheim Maingate Inn, which we split with Guy Selga. This hotel overtakes Alamo Inn (the one where the roof collapsed on guests) for us as the worst hotel near Disneyland, but that’s another topic for another post.

In our Disneyland Half Marathon Weekend Vlog, we have footage from her race and mine, but this report will focus solely on my experience running the Half. I almost opted for the 5K instead due to its Country Bears theme, but decided against it. Judging by what Sarah had to say when she got back from the race, she won’t be registering for any future runDisney events.

Unfortunately, hotels Saturday night were considerably more expensive than Thursday night (especially with Guy not booking us a slot at Murder Motel). Instead, we drove up from home on Sunday morning at 4:15 a.m. for the Half Marathon.

I was really hyped to be in Corral C as opposed to Corral ZZZ where I normally seem to be placed, but this was a good and bad thing. I’ve complained about my corral placement a lot in these race reports, so it’s more than a bit ironic that I get the placement I want, and still find a way to complain.

I’ll start with the good. One great thing about being so far up in the corrals was that I started about 10 minutes after the race itself started. In past runDisney events, I haven’t crossed the starting line until 30-45 minutes after the event started. There’s definitely something to be said for not having to dodge hordes of people walking 5-wide for the first 2 miles of the event. It’s also nice being over half-finished by the time the sun comes up. 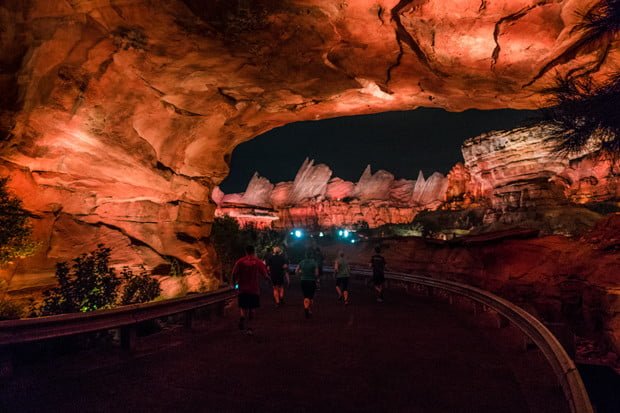 There is a downside, though, and that’s the contrasting “energies” at the back of the pack versus the front. It’s like sitting in the back of class versus the front. In the back, you might be playing Tetris all class on your TI-86, while you’re getting jiggy with actual math up front. You can get an A from either location, but it’s easier in front, and more enjoyable in back.

Same idea with runDisney. It’s business in the front, party in the back, with way more costumes, excitement, and general hijinks in the back, as compared to people who are very serious about completing this race in 1:53:55 to best their previous PR of 1:54:02. (I guess it’s also possible far fewer people worse costumes? I somehow doubt that.) 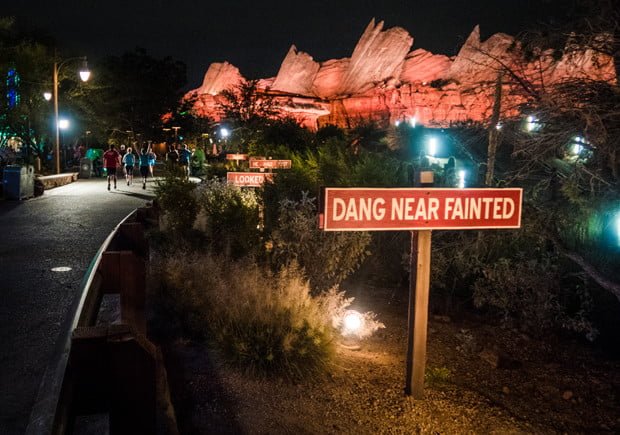 In any case, the first several miles of the Disneyland Half Marathon were awesome. We entered Disney California Adventure through through Cars Land and looped through Paradise Pier before exiting.

Of course, I had to stop several times for photos of the World of Color fountains (always a nice touch) and other random shiny objects that caught my attention along the way. 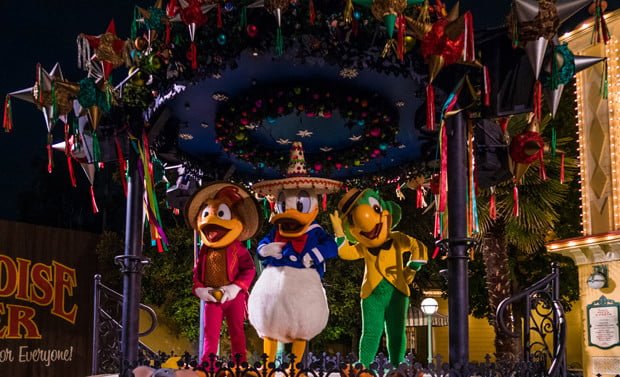 I was really excited to see the Viva Navidad float with the Three Caballeros on it. 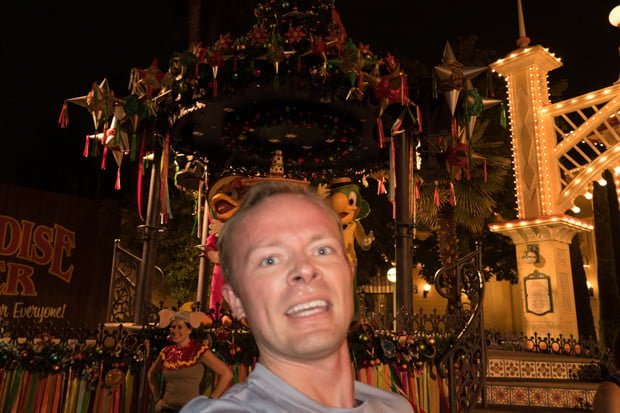 In fact, I was so hyped that I felt compelled to get a selfie. Hard to believe, but this is straight out of camera. No fancy editing to complete this masterpiece. (Real bang up job, Tom. I might as well have put my thumb in the corner of the frame to really complete the effect.)

I’m so excited for Christmas at Disneyland, and really hope the rumors of a Christmas Food Festival at DCA (and expanded Viva Navidad) come to fruition. I think the Christmas food offerings at Epcot are a nice touch, and something similar at DCA would be welcome. 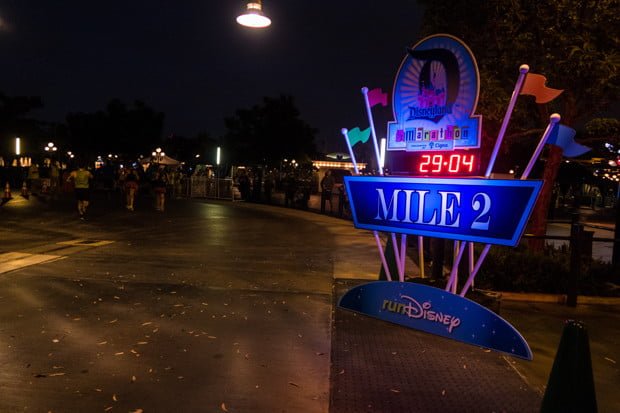 After winding through part of DCA, it was time to head backstage, through the Esplanade, and over to Disneyland. There, we briefly entered Main Street before heading to the guest flow corridor–about the least crowded I’ve ever seen those. 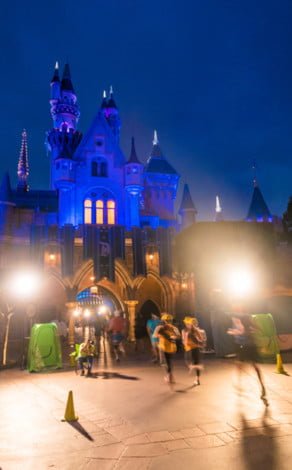 The course looped through Fantasyland and back down Main Street, and I stopped another 10-15 times for photos. For some odd reason, my mile times in Disneyland and Magic Kingdom during these races–even when those miles are at the beginning of the race–are always my worst times. 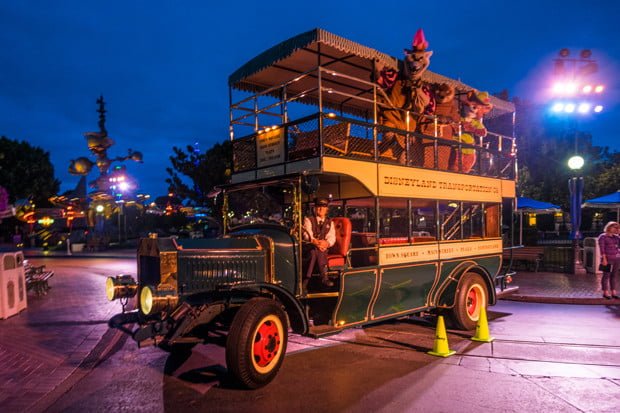 I stopped to get this photo for noted Omnibustorian, Guy Selga–despite him booking us a room at Murder Motel, because I’m a class act like that. 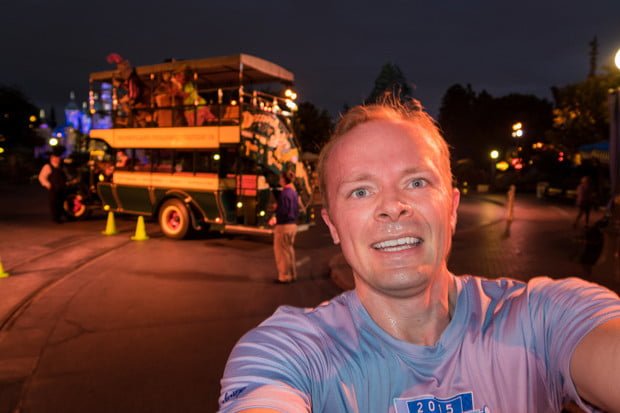 No surprise, he wanted this photo instead. Something about needing something to hang over his couch.

After that, it was time to had back through Disney California Adventure again. This time, I spent the entire time doing video, so no photos from that. You’ll just have to take my word for it that we did go through DCA again if you don’t watch the vlog. 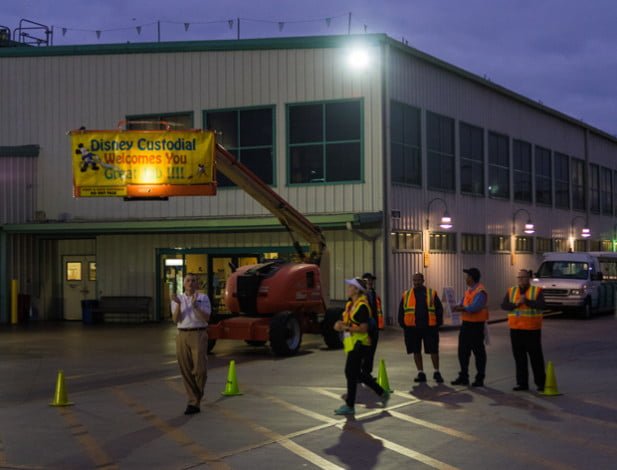 After that, we were backstage a bit, by storage, custodial, and Team Disney Anaheim facilities. The photo above is in no way good, but I thought it was interesting because at this same point in the course last year, the sun was hitting that ‘welcome’ banner. During this run, I still had another 30+ minutes before the sun would come up. One clear upside to an earlier corral. 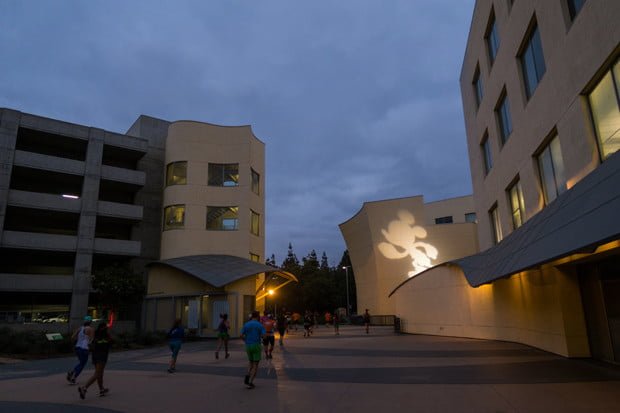 Then it was time to begin the long march through the streets of Anaheim towards the Honda Center and Angel Stadium. 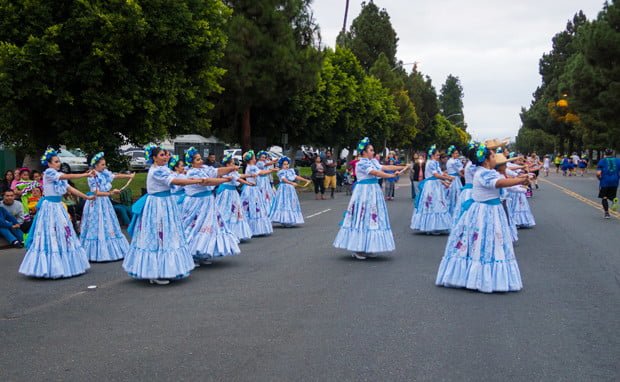 This was basically the same stretch of road as last year, but with more hotel construction and less entertainment. There were a couple of performance groups out and every classic car in Southern California was again parked for the stretching leading into the Honda Center, but that’s about it.

It’s not an interminably miserable stretch like the highway/Wide World of Sports/highway gem in the Walt Disney World Marathon, but with a dearth of entertainment, it leaves a lot to be desired. 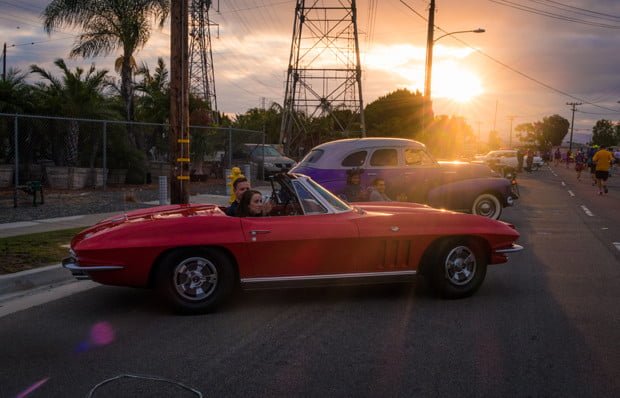 Beyond that, there’s not a whole lot to say about it. I could spit some knowledge on you about Anaheim Business Campus (for example, did you know this 10.26-acre campus is located at a “prestigious, high profile international address that balances business and residential growth”?), but I don’t get paid by the word here, so I’m just going to skip ahead.

About the only other thing that happened during this stretch was that I made a fool of myself on multiple occasions. (Hardly a stop the presses occurrence, but I don’t have anything else to say.)

So I use a Canon G7x II to shoot these vlog segments, which is a great multi-purpose that has a forward-facing LCD screen and touchscreen focus system. It’s like taking a selfie on an iPhone with the forward-facing camera. Pretty much idiot-proof.

Somehow, this is beyond the scope of my photography skills. In one situation, I was “recording” myself for 2+ minutes before I realized that I wasn’t actually recording. In another, I recorded for an extended amount of time before realizing the camera hadn’t grabbed focus. You can see some of the masterpiece that was recorded in the vlog below:

This was especially awesome because holding out a camera and talking while running is super awkward. Even though “desperately craving attention” is one of my many disorders, I’m pretty cognizant of people around me, and don’t quite have the confidence to think “who cares” as countless strangers run past me while I rant about my nipples being sore to a camera.

Speaking of my nipples being sore…they were. This is the kind of lesson you should only have to learn once before NEVER FORGETTING IT AGAIN, but somehow, I forgot to lather the Body Glide on my nipples. At this point, I’m thinking about consulting a plastic surgeon for a nippleandectomy. Something tells me I’m not going to need them at any point in the future.

I also forgot to tape up my feet with Trail Tape. This became an issue pretty early on, and I can only assume my feet were still tender from my 17-mile hike in Yosemite National Park a couple of weeks ago. I haven’t been running recently, so there was no other reason for my feet to get sore so quickly. 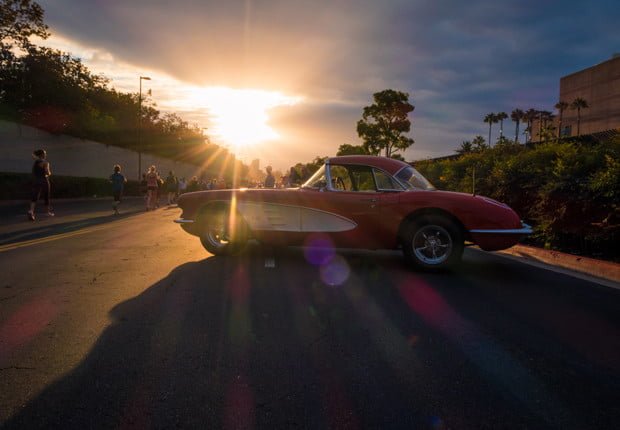 Most of the rest of the race after Angel Stadium was not noteworthy. My “goal” going in was finishing in under 2 hours, but it’s a goal I set the morning of the race, so it’s not like it would be the end of the world if I failed. Granted, it probably cost me a lucrative sponsorship deal from Body Glide, but I’m holding out for Depend Running Diapers, anyway.

More or less it was onto the home stretch after that, as I crossed Harbor Boulevard on Disney Way…

Continue reading on Page 2 for the “thrilling” conclusion to the Disneyland Half Marathon, along with parting thoughts on runDisney…

28 Responses to “2016 Disneyland Half Marathon Report”