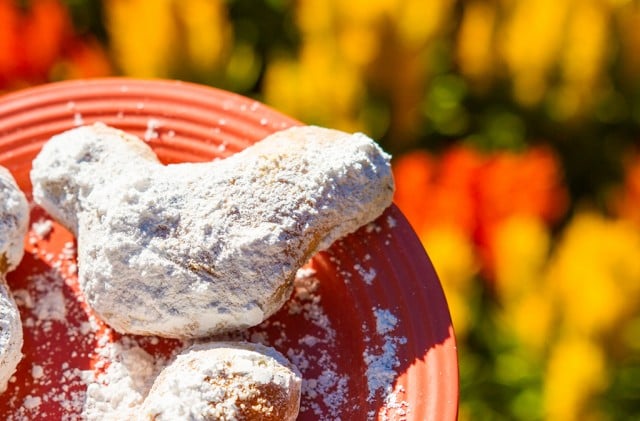 One of the things we love about Disneyland Resort is its frequent seasonal menu updates and special items. This is especially true during the Halloween and Christmas seasons, when dozens of special items are added to the menus throughout Disneyland. By and large, these snacks are delicious. Granted, desserts at Disneyland are normally pretty good, but when it comes to the holidays, the Disneyland chefs bring their A game!

While we didn’t have a chance to test all of the Halloween food items (check out a partial list on the official Disney Parks Blog), many of them didn’t seem to have a logical connection to Halloween (although kudos on the Anti-Vampire Chicken Flatbread…that item is pure genius), so we just opted to focus on the Halloween desserts around the park. We’re pretty big pumpkin fanatics, so it helped that many of these desserts were pumpkin flavored.

We did notice that the prices on some of these dessert items seemed a little more expensive than the norm for Disneyland. The prices weren’t exorbitant, maybe just 50 cents to a dollar higher than non-seasonal specialties, but we figured it would be worth mentioning in case you’re planning a “Pumpkin Snack Around the ‘Land” crawl at Disneyland.

Okay, let’s take a look at some of our favorite Halloween snacks at Disneyland Resort! 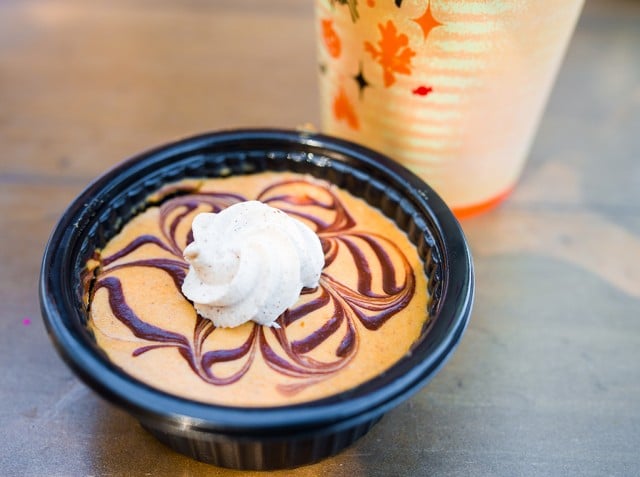 First up is the Pumpkin Cheesecake. This is available in a variety of locations around Disneyland Resort. we got ours from Harbour Galley. This might not be important to many of you, but we were disappointed that it came in a pre-packaged plastic container with a plastic lid on it.

Given the $5+ price, it would have been nice if the presentation were a little better (it’s sold on actual plates elsewhere). As for the cheesecake itself, it was delicious, with a strong resemblance to pumpkin pie, except in cheesecake form! 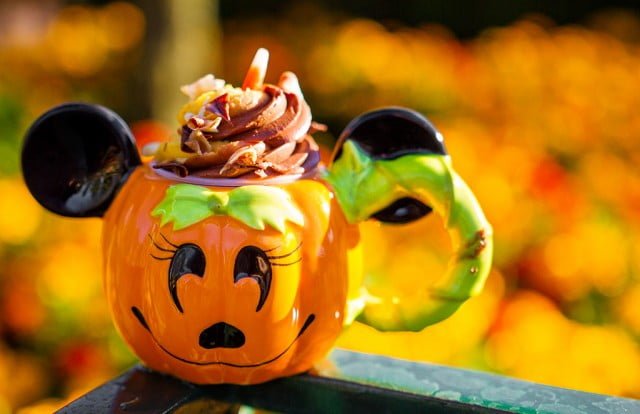 The Pumpkin Minnie Demitasse might be the “flagship” Halloween snack at Disneyland Resort. These Demitasses are sold for Christmas and Halloween in nice, ceramic mugs. At one point, the mugs changed every year, with many fans collecting them, but we’re not sure whether this is still the case (anyone know?).

The actual dessert is inside a plastic insert in the mug, and is on the smallish side, but it’s delicious. Despite being pumpkin flavored, it’s quite rich, which is probably the result of chocolate flavoring and candy corn garnishing on top. Given the quality of the mug, this snack actually is a great value at around $8, but if you don’t care about the mug, it’s way overpriced for the portion size. 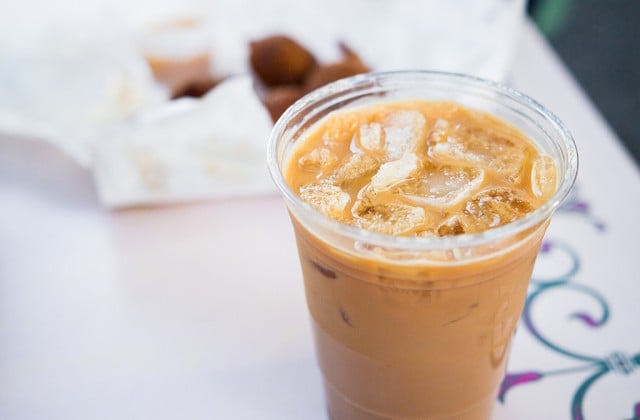 Sarah ordered this iced pumpkin latte from Royal Street Veranda, and neither of us liked it. While we like the Starbucks Pumpkin Spice Latte, despite being crazy about pumpkins, that’s not one of the things that we can’t get enough of, so maybe pumpkin latte just isn’t up our alley?

Whatever the case, we felt that this latte didn’t taste much like pumpkin, but just tasted odd. Almost like smoked coffee. It was pretty expensive, to boot. 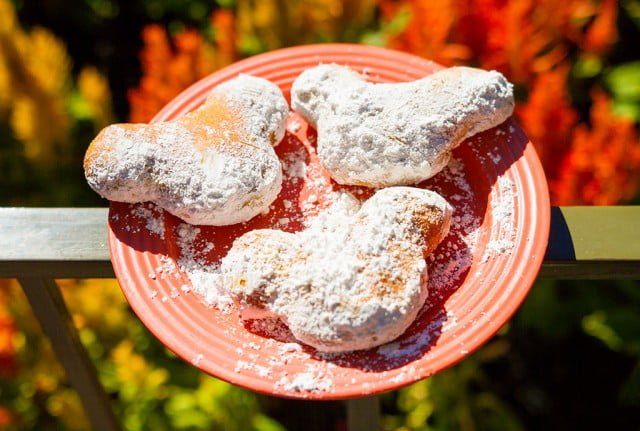 These Pumpkin Mickey Beignets are available at the Mint Julep Bar, and thanks to the popularity of them and the Mint Juleps, you might expect to wait in a long line for them. We recommend grabbing some early in the day.

They come served in a bag with a liberal amount of powdered sugar. The beignets come in 3 and 6-packs, and are freshly made when ordered. They are like airy bites of pumpkin goodness, and definitely highly recommended. Even if you don’t think you’ll want 6, you probably should order that many…just to be safe. 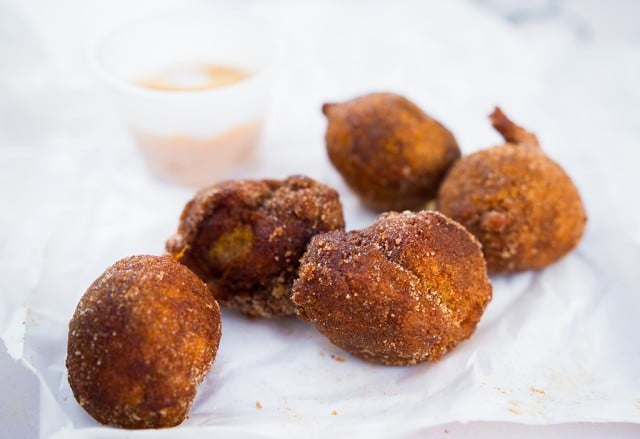 The Pumpkin Fritters at Royal Street Veranda totally make up for that latte they serve. This is our unanimous pick for the top Halloween snack at Disneyland Resort (granted, there are only two of us, but it’s still unanimous!).

These came with a custard dipping sauce, but the fritters had such a greaty, pumpkin flavor by themselves that we didn’t use a whole lot of the dipping sauce. Like the fritters, these tasted fresh, and actually had real pumpkin in them. If you skipped lunch, you could probably eat around 15 for a meal. Not that we’d recommend doing that…but we wouldn’t not recommend doing it, either! 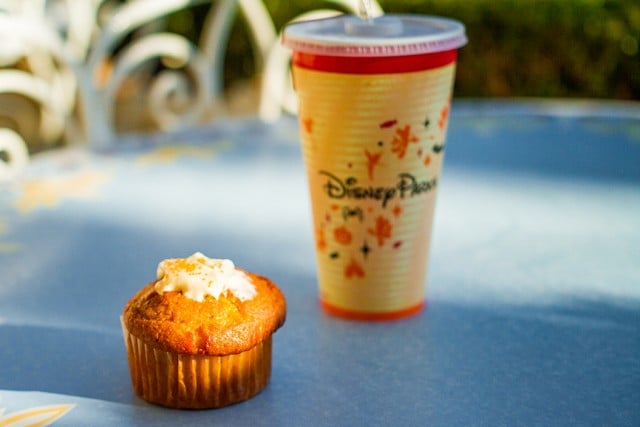 This Pumpkin Muffin was a surprise favorite of ours. It’s incredibly moist and has a lot of flavor thanks to the cream cheese on top, making it a departure from your standard muffin.

It’s less expensive than most of the snacks on here, but it’s also on the small side (we had one a couple of years ago at Whitewater Snack Co., and it was considerably larger). 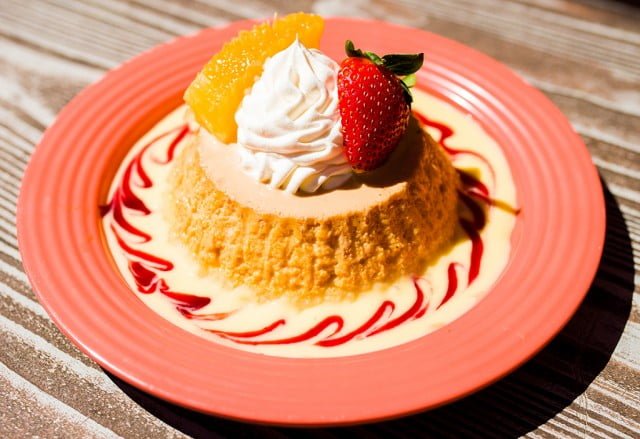 This Pumpkin Flan is another winner. To my knowledge it’s only available at Rancho del Zocalo is the only place at Disneyland Resort that serves this, and it’s excellent.

It has a light, milky flavor that almost reminds me of tres leches cake. Of course, it tastes like pumpkin, too, and the whole thing has great presentation. It’s decently sized for its $5+ price, especially considering that it’s actually less expensive than the pumpkin cheesecake. 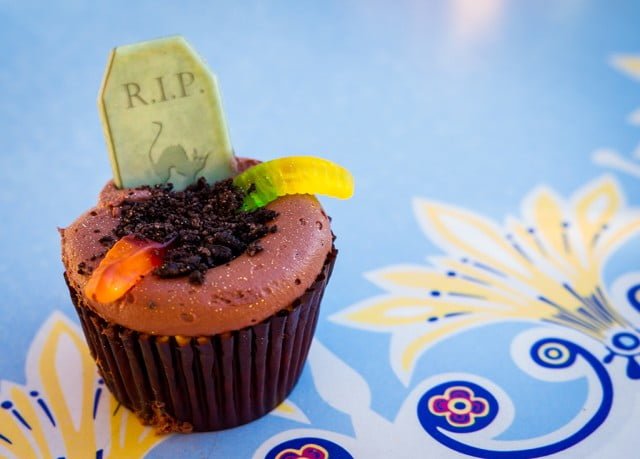 This tombstone/RIP/earth worm cupcake from Jolly Holiday Bakery is a chocolate lovers’ delight. A variety of different “styles” of chocolate are present in the cupcake, from the sprinkles on top to the frosting to the cake, to even the center of the cupcake. We thought this cupcake was excellent, but due to its richness, we recommend splitting it.

If you can try all of these snacks in a single day, you have our respect. If you can them all, then do a few spins on Space Mountain Ghost Galaxy, we’ll give you “mad props.” If you’re visiting Disneyland during the fall, make sure to read our Halloween Time at Disneyland Guide to get the most out of the special Halloween offerings!

As for figuring out the rest of your Disneyland trip, including what to pack, whether you should stay off-site or on-site in a Disney hotel, where to dine, and a number of other things, check out our comprehensive Disneyland trip planning guide!

Which Halloween Time at Disneyland snacks do you enjoy? Which ones here look the best to you? Any questions about what else we recommend this year for the fall season at Disneyland? Hearing from you is half the fun, so if you have additional Halloween tips or questions, please share them in the comments!