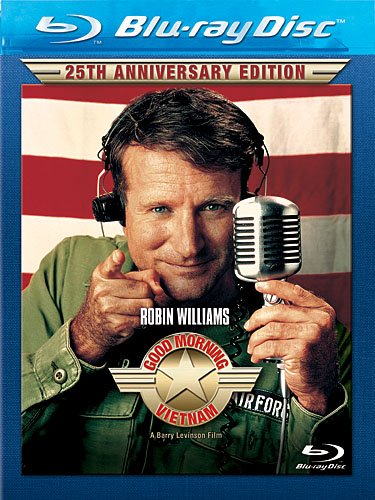 Thanks to a few too many trips into the movies aboard the Great Movie Ride, Good Morning, Vietnam is probably the movie I quote the most despite never having seen. Suffice to say, after quoting that line for so many years, I was quite pleased to finally pop in the Good Morning, Vietnam (25th Anniversary Edition) Blu-ray

, Airman Second Class Adrian Cronauer (Robin Williams) is a military-radio DJ who is brought to Vietnam in 1965 to bring humor to an otherwise dry and “easy-listening” Armed Forces Radio. Cronauer is met by Private First Class Edward Montesquieu Garlick (Forest Whitaker), with the two becoming friends. The film chronicles Cronauer’s time on the radio, and how he brings a palpable energy to the radio and the troops. Cronauer’s sharp style quickly clashes with his superiors, Second Lieutenant Steven Hauk (Bruno Kirby) and Sergeant Major Dickerson (J. T. Walsh) who both prefer an uptight style of radio programming devoid of humor and personality. Cronauer’s hosting style consists of unpredictable humor segments mixed with his editorialized news updates, and rock and roll, which is also frowned upon by his superiors. Hauk detests all of this, and tries to get Cronauer to change his approach. The film also chronicles Cronauer’s off-air exploits as he tries to meet Vietnamese women and begins to have brushes with the real war.

The film is loosely based upon the true story of Adrian Cronauer, but it has been heavily modified for film. The result is an interesting mix of a view of 1965 Vietnam, along with a glimpse of Robin Williams when he was just beginning to gain popularity. His character appears to be a tamed-down caricature of his real life persona. I really enjoyed the film, and found it to be a great entry into the wartime-humor-drama-biopic canon, but your mileage may vary. I know Robin Williams is quite divisive, and if you’re not a fan, you might want to steer clear of this title. Much of the film is dedicated to Williams’ on-air improv act.

Mediocre: not bad, not great. The blacks and contrast are solid, and the colors are well saturated. There is some slight noise at times, but this film is 25 years old. At other times the transfer is soft and lacks noise, or contains text that is overly sharp. My familiarity with Photoshop (obviously something else was used here, but the same principles apply) suggests to me that some combination of noise reduction and edge sharpening were applied to the film. It doesn’t look awful, but I think the scenes with the noise actually look a tad better than the softer, noise-reduced scenes with awkward sharpening. Given that this title is just now being released on Blu-ray, there probably isn’t a huge demand for a full digital restoration, but that would’ve been nice.

Again, mediocre. The audio here is presented in Disney’s DTS-HD Master Audio 5.1 surround. Knowing that the film was about radio and Vietnam, I was expecting something truly spectacular here. However, there isn’t the deep LFE I was expecting, nor is there really immersive audio. Most of the movie comes through the front channels. This could be faithful to the original audio of the film (it is 25 years old), but I am no purist. I would’ve liked to see a bit more aggressive of an audio mix. Not necessarily distracting or overpowering, but something a bit more engaging. The audio is by no means bad, it’s very passable, I was just expecting a bit more.

As compared to the last film I reviewed, The Rocketeer, Good Morning, Vietnam is a veritable gold mine of extras. However, when not compared to that barebones release, it’s not so impressive. Less than an hour of extras are present in this one-disc release. The biggest extra is the Production Diary, which includes several features, such as “How the Movie Came to Be,” “Actor Improv,” and “Music of the Movie.” These discuss the process of making a film about Vietnam with those involved in the production of the film. It’s colored with keen insights on everything from shooting in Thailand to the rock music that went into the film. The history is what really matters. Adrian Cronauer appearances in the “Origin of The Good Morning, Vietnam Sign-On” discussing the “man behind the character.” “Raw Monologues” is easily the coolest feature, which is thirteen awesome minutes of Williams doing what he does best: improvising.

is a comedic classic, and on that basis alone, it’s worth owning. I would’ve liked to see more done for the release of an AFI list film, but apparently the studio feels the interest isn’t there. Fans of the film probably didn’t need my review to know that they’ll be purchasing it. For everyone else, I would still hesitantly recommend this Blu-ray release. It’s not a must-buy, but it’s a great film in a decent package.

If you’re planning on buying Good Morning, Vietnam, please use the Amazon.com link below. Using the Amazon links here help support DisneyTouristBlog.com, and allow us to continue providing you mediocre (errr…”great”) content.