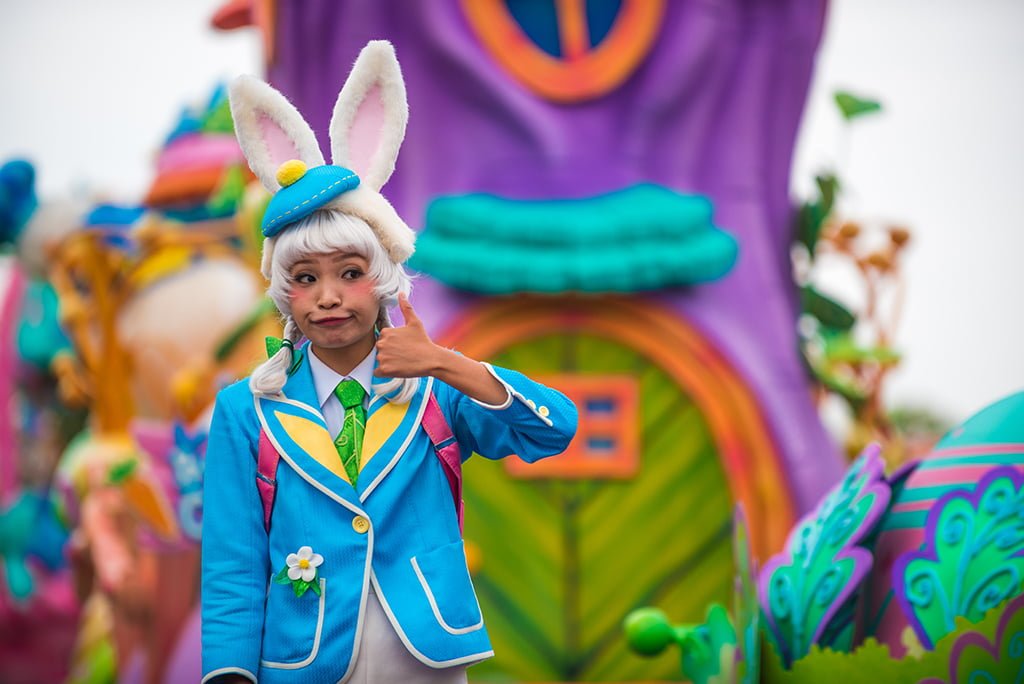 Recently, we asked Should You Avoid Tokyo Disneyland & DisneySea for the Next Year?, which followed our Visiting Japan Near the Summer 2020 Olympics? post. I was also inclined to put a question mark in the title to this post, but figured that might be excessive.

The salient point of those previous two posts and now this one is that a lot at Tokyo Disney Resort is and will be in flux for the medium-term future, and we’re not totally sure how it’ll impact the guest experience. Previously, our commentary on these topics stemmed from a projected attendance surge driven by the Tokyo Summer Olympics, new attractions, and a rise in refurbishments ahead of those first two things.

The impetus of this post, which questions whether Tokyo Disneyland and DisneySea are experiencing ‘growing pains’ that might cause you to rethink your Japan travel plans? A reduced entertainment schedule and smaller calendar of seasonal events for 2020…

When Oriental Land Company released the 2020 calendar for Tokyo Disneyland and DisneySea, there were some conspicuous omissions. Notably, there’s no Easter or Summer Festival at Tokyo Disneyland, and no Tanabata Days in either park. Finally, there are no new seasonal parades or stage shows for either park, with Disney Christmas Stories returning to Tokyo Disneyland for an unprecedented sixth year.

This might not sound alarming to Walt Disney World or Disneyland fans, but Tokyo Disney Resort normally has a jam-packed calendar. In addition to the normal daytime parade and Dreamlights night parade, there is normally a seasonal parade presented at Tokyo Disneyland. (That’s right–three different parades per day!) 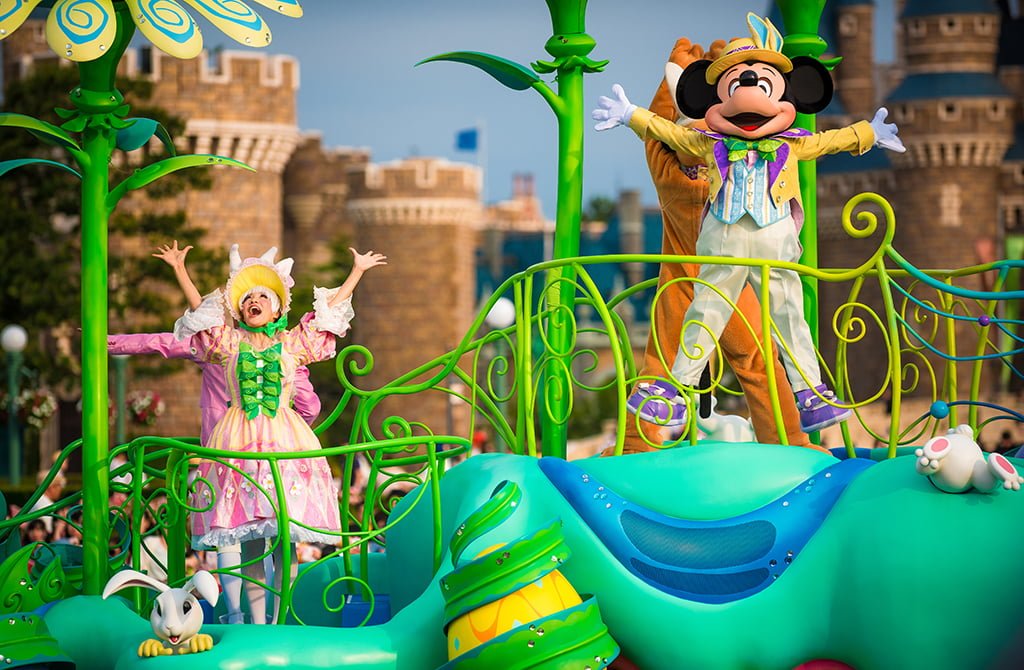 Although the holiday is not traditionally celebrated in Japan, Easter is a normally a huge, multi-month celebration at Tokyo Disneyland. It features one of the park’s best parades, great decorations, and delightful ear-worm music. Losing Easter entirely is a really big blow.

Christmas is likewise a great time to visit Tokyo Disneyland, with excellent decorations, attraction overlays, and more. However, the Disney Christmas Stories Parade is not among these highlights (at least in our estimation). Its predecessor–the vastly superior Santa Village Parade–lasted 4 years. Most Christmas parades prior to that were refreshed or replaced after a year or two. 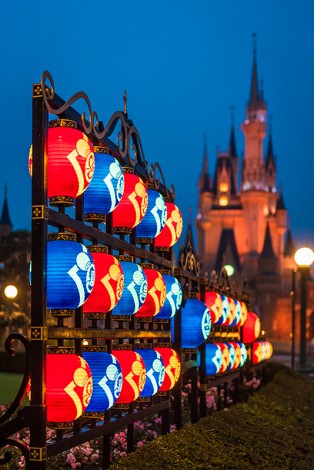 Losing the Summer Festival is not as big of a blow. We loved the traditional decorations of Natsu Matsuri, but Donald’s Hot Jungle Summer (which debuted this year), didn’t have anything beyond a nighttime stage show and daytime smile and wave…with water.

The stage show was fun and it was cool to see such an offering in front of Cinderella Castle at night, but it’s not a huge surprise that Tokyo Disneyland isn’t bringing it back. 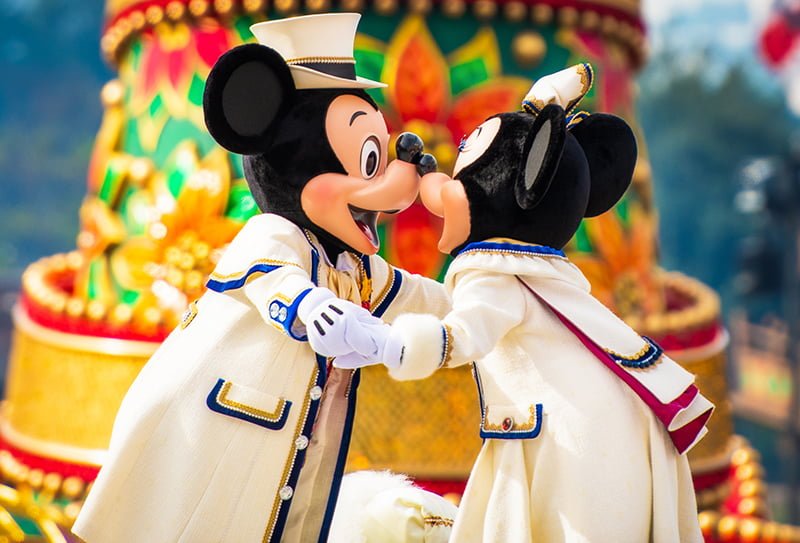 There are several valid reasons why spring and summer entertainment would be cut from Tokyo Disneyland. The first is the opening of Enchanted Tale of Beauty and the Beast, Fantasyland Forest Theatre, Minnie’s Style Studio, and the Happy Ride with Baymax, all of which debut as part of a huge expansion on April 15, 2020. 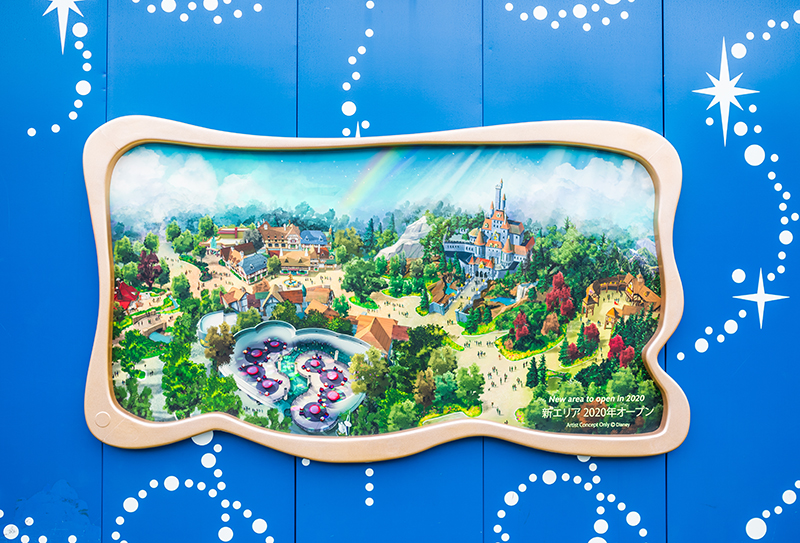 These additions, especially the mega E-Ticket Enchanted Tale of Beauty and the Beast, will likely be huge drivers of attendance. The new attractions will cause a spike in crowds and congestion throughout Tokyo Disneyland. It’s highly likely that OLC is eliminating Easter entertainment at Tokyo Disneyland for the year to preemptively ease that and avoid any problems.

The popularity of these new additions is unlikely to wane come summer, at which time the Tokyo Summer 2020 Olympics also could result in a second influx of tourists to Tokyo Disneyland. From the same perspective as above, it thus makes sense to not have entertainment. It should help in terms of crowd-flow. 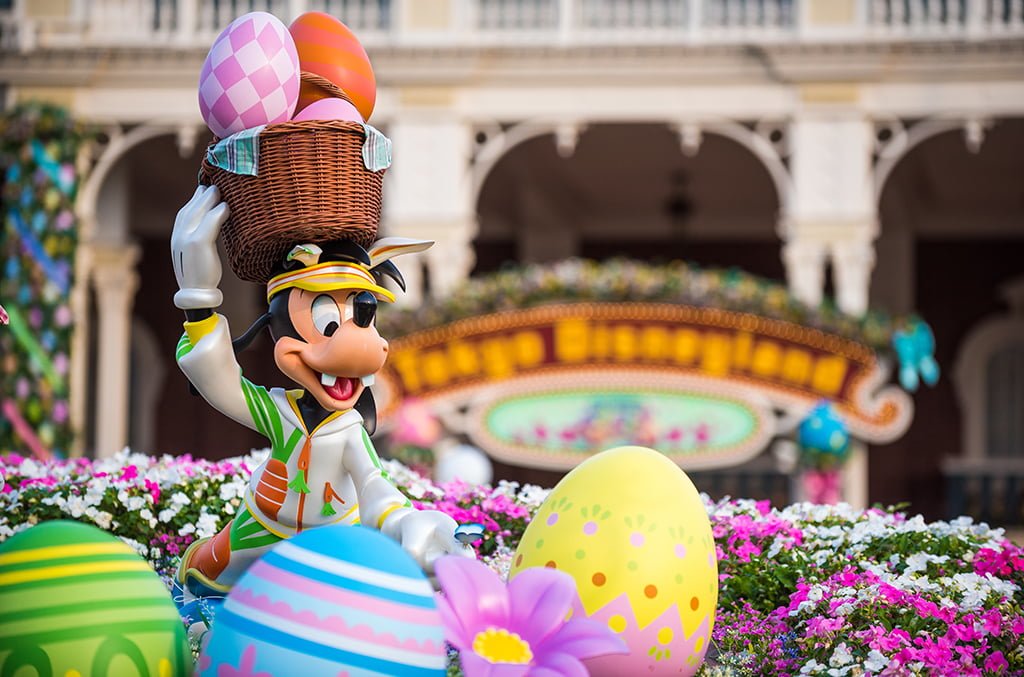 Additionally, spring and summer entertainment solely in Tokyo DisneySea means that a lot of the local audience and Annual Passholder population will be drawn away from the tourist crowds swarming Tokyo Disneyland and into DisneySea. This counter-programming (of sorts) could help to better distribute attendance between the two parks.

However, these are charitable explanations that don’t cover everything. For one, there’s the total lack of Tanabata Days. This was/is a lovely offering for locals, but not flagship entertainment that causes tourists to book trips to Tokyo Disney Resort. 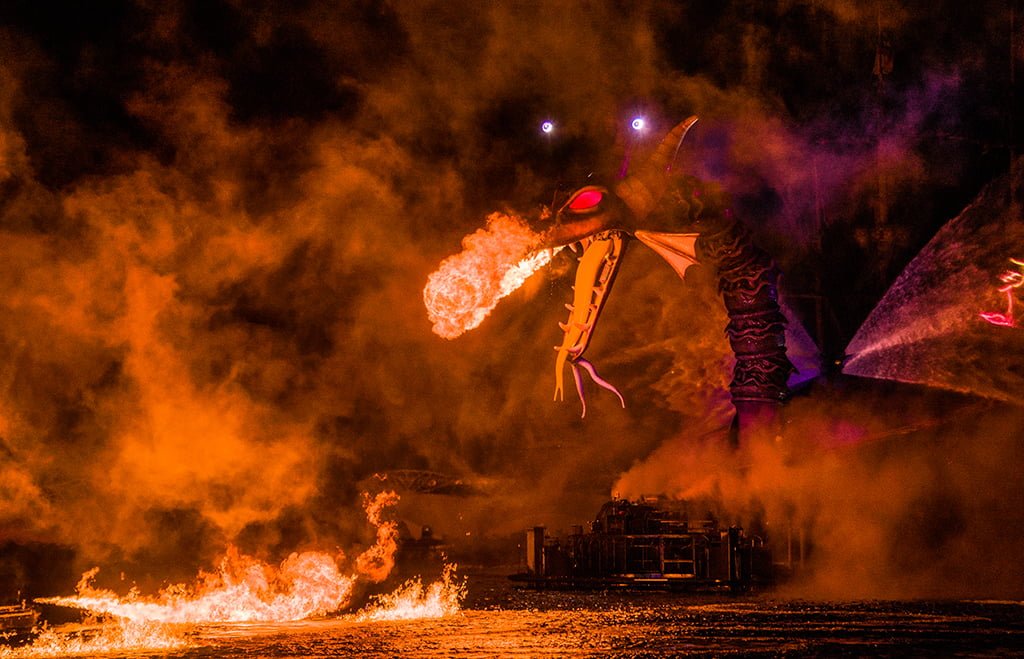 Second and more importantly, Fantasmic is ending at Tokyo DisneySea in March 2020.

Given the tight turnaround time, it seems highly unlikely that Fantasmic will receive an immediate replacement. If OLC’s goal were to draw crowds away from Tokyo Disneyland, nighttime entertainment is one of the best options for that. (It’s also worth noting here that Tokyo DisneySea retired the glorious Legend of Mythica five years ago, and still has not replaced it.) 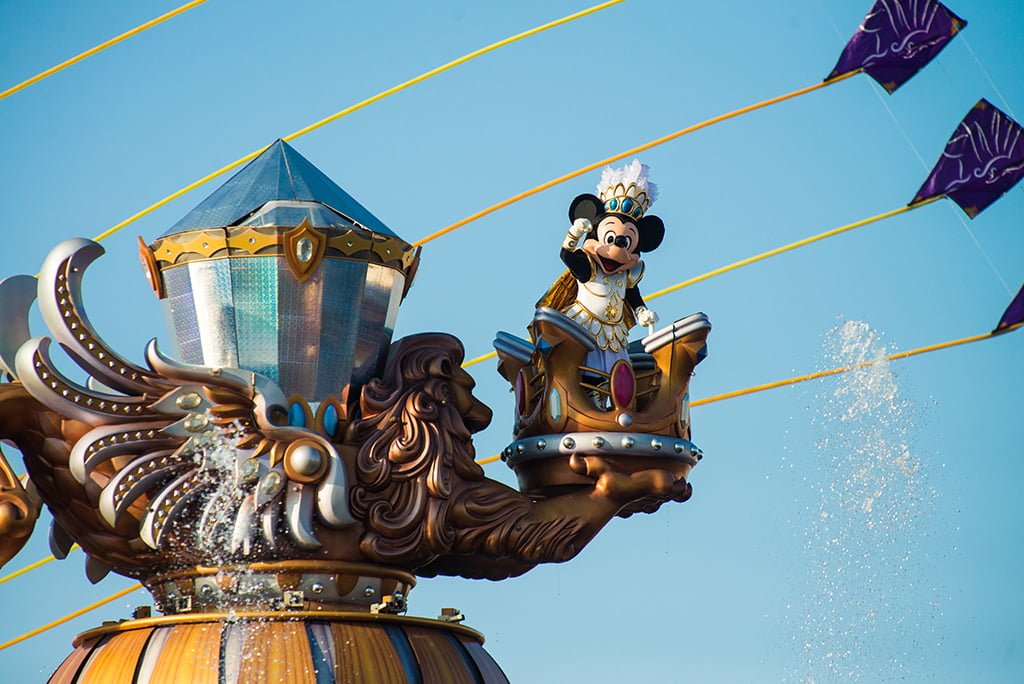 For as long as we’ve been visiting, Tokyo Disney Resort has been known for its lavish, expensive, and frequently-changing entertainment offerings. As much as we’d like to “explain away” 2020 as an anomaly (and in large part, we still think that’s the case), it also seems that Tokyo Disney Resort is scaling back these offerings and shifting towards new attractions as a driver of attendance.

At least in part, this is unsurprising. The Fantasyland/Tomorrowland expansion in Tokyo Disneyland, and Soaring plus Fantasy Springs additions to Tokyo DisneySea will cost over $3 billion. These are staggering capital expenditures, on par with what Walt Disney World will invest in reimagining Disney’s Hollywood Studios and Epcot. It’s no surprise that OLC would want to offset some of this with lower operating expenditures. 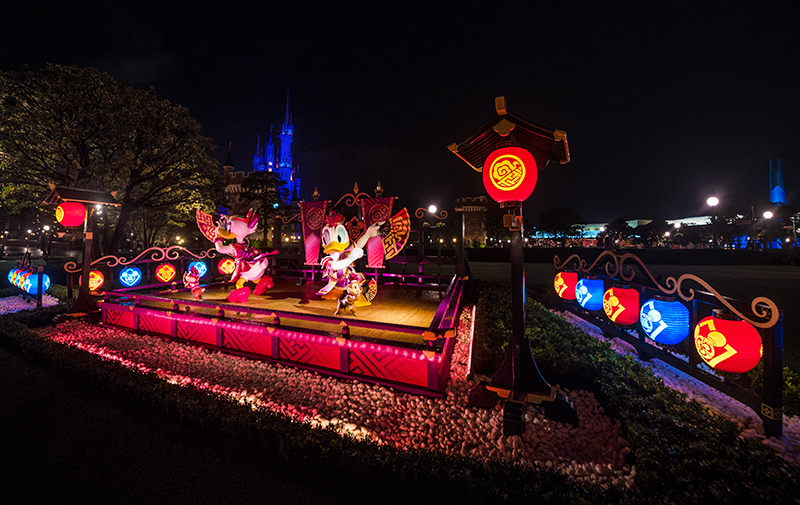 Thankfully, one explanation that’s unlikely is OLC targeting different visitor demographics. This was my gut impulse before researching this article, but I’m now convinced that’s probably not the case. While Tokyo Disney Resort has seen a rise in overseas tourists (the vast majority of whom are from China, Korea, Taiwan, or elsewhere in Asia), these visitors still account for less than 10% of all visitors to Tokyo Disney Resort.

While that number is up exponentially in the last decade, it’s still modest when viewed as compared to the explosion of inbound tourism to Japan. Stated differently, Tokyo Disney Resort is seeing disproportionately low gains from Japan’s tourism boom. This might seem surprising, as Disney theme parks would ostensibly seem to be “touristy” destinations. 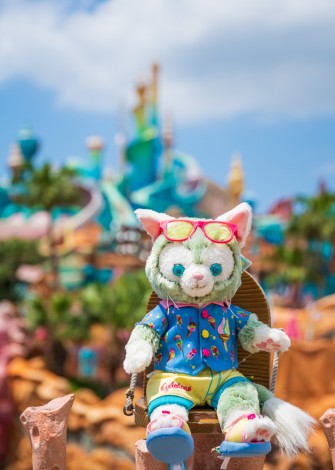 We’ve pontificated at length about Tokyo Disney Resort being one of the least touristy places overseas visitors can visit in Japan and that’s not really germane to the topic at hand, so we’ll spare you that. We will say this should be a relief for regular guests. More tourists means less of need to constantly refresh entertainment, as everything is new to one-and-done visitors.

Oriental Land Company has also indicated that leaning more heavily on tourists is only one of its medium-term goals, and not the main one. Rather, the top priority is to “foster medium to long-term fans (repeat guests),” which OLC ties directly to the aging population and declining birthrate (page 21).

This bodes well for seasonal offerings, as it’s the most effective way to cultivate a loyal fanbase of repeat and frequent visitors. (Also in that medium-term plan is discussion of increasing merchandise and food/beverage spending, and if past precedent is any indication, anniversaries/seasonal events are the most effective means for OLC to do that.) 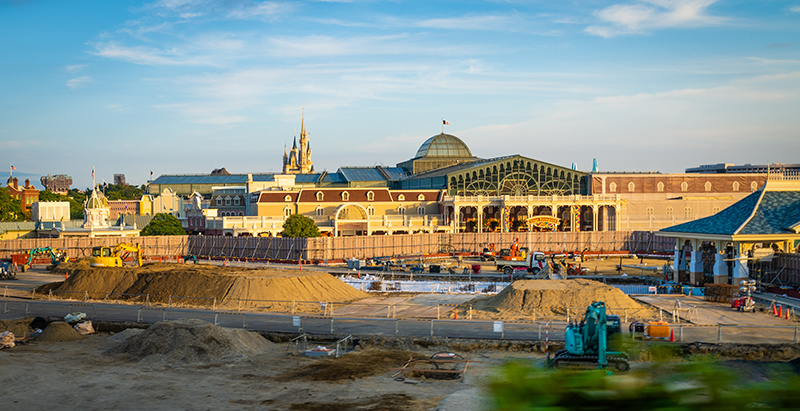 Circling back to the titular question, I think all of this does point to growing pains, fueled largely by a mix of crowd concerns and reduced opex to partially offset increased capex. It is likely that Tokyo Disney Resort will not see its entertainment refreshed as regularly as in the past, but this is hardly a bold prediction given that it’s already been happening for several years.

Despite that, it’s unlikely that the 2020 cuts are reflective of any long term vision and strategic aims for Tokyo Disney Resort. New attractions are great, but entertainment and seasonal offerings are necessary to appease the fanbase. As the worldwide Disney resort most dependent upon locals and repeat visitors, more significant and lasting cuts are unlikely. In short, we’d expect Easter and Summer Festivals to both return to Tokyo Disneyland–probably in 2021.

These growing pains are something to keep in mind if you’re planning your first visit to Tokyo Disney Resort. However, there’s a strong possibility that we’ll see similar trends between now and 2024 (albeit with different offerings), so we wouldn’t discourage you from visiting on the basis of reduced or less frequently-refreshed entertainment. (We’re not thrilled about the 2020 lineup, but it won’t stop us from visiting.) Plus, if it’s your first time in Japan, it’s all new to you!

What do you think about the 2020 calendar for Tokyo Disney Resort? Are you fine with a reduced entertainment lineup given the new attractions? Do you agree or disagree with our view that this likely doesn’t reflect a change of course for OLC? Any questions? Hearing your feedback—even when you disagree with us—is both interesting to us and helpful to other readers, so please share your thoughts below in the comments!