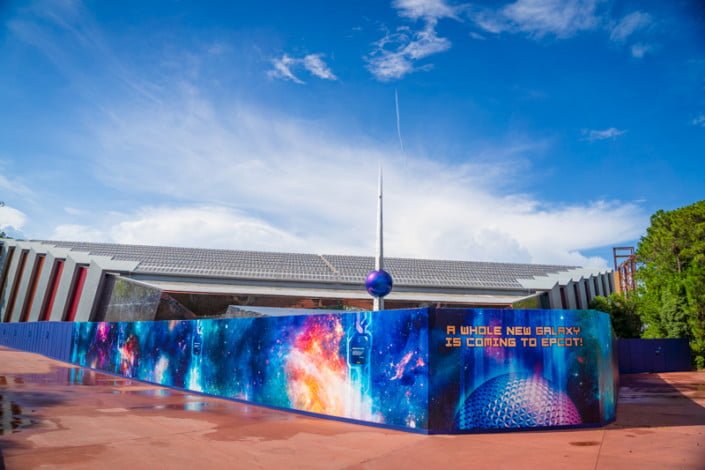 UPDATE: Walt Disney World has announced that a Guardians of the Galaxy roller coaster is coming to Epcot, with the popular Marvel characters getting a big budget ride replacing Universe of Energy.

The project is now under construction with an anticipated opening date of Fall 2021. You can see progress on the gigantic show building in our monthly updates on the biggest construction projects at Walt Disney World.

Beyond that, not many official details are known about the ride. It’s expected to be a hybrid coaster, and if the show building’s size is any indication, it’ll be massive.

Note: what follows is info from prior to the official announcement, including a rundown of the rumors and permits about the Guardians of the Galaxy attraction…

As outlandish as this sounds, the rumblings of late have been that Guardians of the Galaxy would be replacing Ellen’s Energy Adventure, in a totally new build, or a partial expansion of the existing building (not exactly sure how that would be accomplished). There were even height balloons spotted, giving further credence to the ‘new build’ rumors.

Additionally, Disney filed with the South Florida Water Management District to re-route the canal behind Universe of Energy, and create two new retention ponds. The permits reason for the work is “for possible future changes to parking capacity and back of house areas.”

You might be thinking: “a water permit, so what?” That’s definitely one way to look at it. Even if the Guardians of the Galaxy project were dead, it’s possible Disney would still go forward in filing this permit. However, the permit mentions the addition of construction trailers, and contains a huge boundary (see below) that includes the Universe of Energy building. 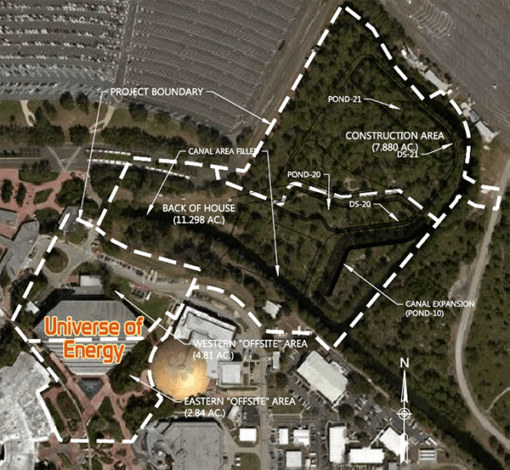 Disney is well aware that fans are watching the construction permits it files, and after having the gondola story leak out before Walt Disney World was ready to announce it, it’s also possible the company is getting (even more) vague with permits.

It’s also possible that is for a project other than Guardians of the Galaxy. Universe of Energy is well past its prime and due a replacement regardless, and this could be setting the table for whatever is to come. As we reported in our 8 Huge Epcot Rumors post, a lot is on the table right now for the park, and Imagineering seems to be in “Blue Sky Overdrive” for a reimagining of the park.

Whatever is happening with Universe of Energy, I do not think it’s some simple canal work. This is the precursor to something bigger. Hopefully we’ll hear what that “something” is at the D23 Expo in a couple months.

I don’t care how much lipstick you put on it or layers of backstory are flung onto the walls of the queue and post-show, a Guardians of the Galaxy roller coaster has no place in Future World. These characters are an inorganic fit for Future World, and any attraction featuring them necessarily will be shoehorned into Epcot.

If what follows sounds familiar, it’s because this is becoming somewhat of a refrain from me with each rumor or announcement that amounts to thematic denigration by management that either doesn’t understand or care (or both) about the distinct, overarching themes of parks and lands.

I can already anticipate the responses defending the addition of this roller coaster (or any potential Guardians of the Galaxy attraction): that Ellen’s Energy Adventure is stale, that Future World is stale, that the edutainment component of the original EPCOT Center has failed. I would agree with all of those premises.

However, before I agree to any conclusions that might follow from said premises, I’d add more to that: Disney ignored Epcot for decades, shoehorning things where they didn’t belong, and letting the park stagnate. As such, my ultimate conclusion would not be that Epcot needs thrill rides or a new mission statement to be relevant.

Future World stopped being “relevant” when Disney started ignoring its mission statement, not due to that mission statement being broken. The problems Epcot faces today were not caused by its lofty ambitions, but of Disney “updating” it by shoehorning in characters and going the cheap route on keeping the park fresh. A Guardians of the Galaxy roller coaster is not the solution to Epcot’s problems, it’s another symptom of them. 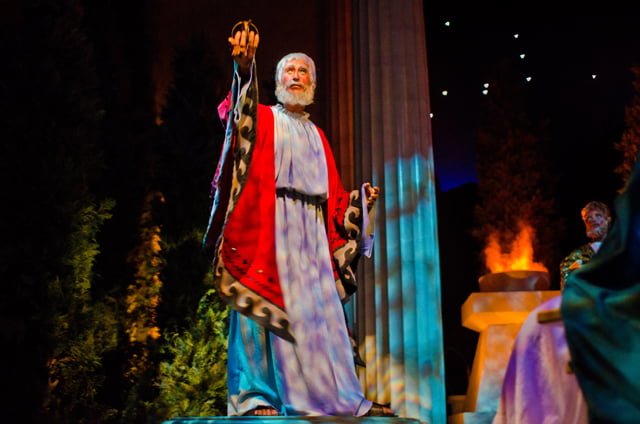 Despite what many claim, Epcot’s mission statement is not obsolete, and learning has not suddenly become “boring.” An estimated 135 million people, including 45 million in the U.S., watched “Cosmos: A Spacetime Odyssey,” hosted by Neil deGrasse Tyson. Americans are fixated by SpaceX’s every move, and CEO Elon Musk is treated like a rock star wherever he goes. The tech companies of Silicon Valley rank as some of the world’s most admired companies. Pop culture has made being geeky cool, and information is more accessible than ever.

No, CSPAN isn’t the most popular network on television, but most people do like to learn. If educational subjects are presented in ways that makes them fascinating, they are well received. Which, as it were, was the whole point of “edutainment” in the first place. In their heyday, the original EPCOT Center attractions resonated with guests, who learned something while being entertained.

Focusing on innovation through edutainment is not dead as a viable concept for a theme park, just as learning and being entertained are not “dead.” What isn’t viable is trotting out woefully outdated attractions, shoehorning characters into existing attractions in a half-baked manner as a bandaid, and spending hundreds of millions of dollars on new attractions that are just flat out weak.

Above all else, it’s the execution that matters for an individual attraction, and how that attraction is integrated into the larger thematic tapestry of a land and park. Imagineers could make a strange attraction about a green martial artist, talking raccoon, and humanoid tree, and it could be awesome. It just depends upon the execution. Ironic that the very envelope-pushing, creative movie that proves this true is going to further obliterate Epcot’s theme as more franchises are shoved into Epcot in a way that is an inorganic fit (which is also to say that franchises could work in Future World).

The possibility of a Guardians of the Galaxy roller coaster in Future World is indicative of there being no vision for Epcot. Management has its eye on the next few years–and this coaster will undoubtedly be a marketing draw the first few years it’s open–with no concern for the long-term. The net result is that 10 years from now every park will look the same: like a hodgepodge of attractions not designed with theme in mind, but on the basis of which franchise could fit where in any given year. Expedition Everest needs a big refurbishment next year? Well, good news! Cars 3 has a mountain in one of its backgrounds, and it did well in the Asian markets, so it’s a perfect fit for an overlay in Asia at Disney’s Animal Kingdom! 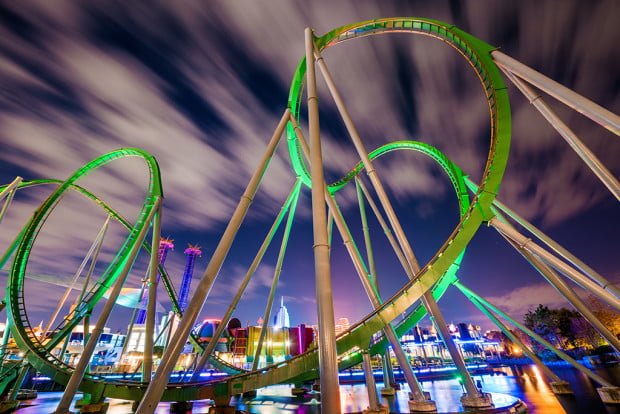 For fans, I know it might be easy to accept attractions that are poor fits, especially in Epcot, as the park has been neglected for so long. I also know there’s not exactly any love lost for Ellen’s Energy Adventure, which is long overdue for a replacement. However, that does not mean we should just gladly accept whatever. Theme still matters, and adherence to theme is part of what will be necessary to get Epcot back on track. After years of stagnation, the answer to Epcot’s problems does not lie with quick shots in the arm, but with a comprehensive vision that re-establishes its unique identity in ways that entertain and capture the imaginations of guests.

The reason so many of us are fans in the first place is because of the “Disney Difference,” or the high standards to which Disney held itself that differentiated its parks from the rest. After years of neglect, there is a lot in the pipeline right now for Walt Disney World (more on this soon…), just because we have been starved for anything new in the past does not mean we should lower our standards for what it means to be a Disney theme park.

Do you agree or disagree with my take on Guardians of the Galaxy rolling into Epcot? Is Ellen’s Energy Adventure such a snoozefest that you just don’t care? Or do you “trust in Disney” to do a good job making any concept fit? Hearing from you–even if you disagree with me–is half the fun, so please share in the comments!

104 Responses to “Guardians of the Galaxy Ride Coming to Epcot!”