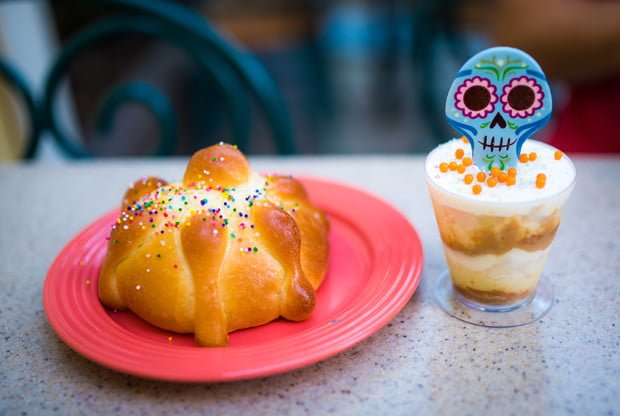 Although Haul-O-Ween in Cars Land and Nightmare Before Christmas on Buena Vista Street have garnered a lot of buzz, there’s something even more exciting this Halloween season at Disney California Adventure: fall menus and Halloween desserts! In this post, we’ll share some of our favorite (and least favorite) Halloween foods served at DCA.

All told, there are around three dozen Halloween dishes listed on Disney Parks Blog’s list of ‘Halloween Treats & Eats’ in DCA alone. Once you include Disneyland and the hotels, there are more seasonal foods than we can count. So naturally, we set out to eat them all in a single day.

…When we awoke from our sugar coma, passed out under a table in the Award Weiners seating area with the smell of hot dogs wafting through the air, we reassessed our life decisions, and pressed on. Unfortunately, we haven’t quite tried all of the Halloween foods at Disney California Adventure, but we’ve made a good dent in the list…

And we’ve gotta say, wow, what a list it is. We’ve been critical of Disneyland Resort’s failure to go all-out on the seasonal menus in the last couple of years like they used to, so we feel compelled to give kudos where kudos are due. This is the best lineup of seasonal foods at Disneyland and Disney California Adventure in years. The level of ambition and creativity really impress, and even things that fell felt for us earned points for effort.

Suffice to say, we’ve been really impressed, and are optimistic that this bodes well for Christmas. With that said, let’s take a look at the Halloween treats in Disney California Adventure… 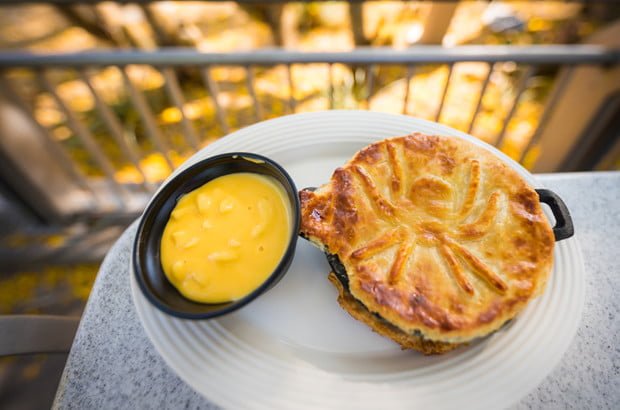 We’ll start with the Car-achnid Pot Pie. Speaking of things of which we’ve been critical, this is served at Flo’s V8 Cafe. The menu there has taken a dive in the last few years, but we’re pleased to report that this chicken pot pie with dried cranberries and butter-crust spider is anything but a disappointment.

This hearty dish is served in a literal dish, and has every characteristic of a homemade pot pie that you’d think someone labored over for hours. The butter-crust spider is a cute touch, but the flavor and texture of this crust are the real MVP here. They give a nice heft to the pot pie, making it a delicious and filling dish. This is our can’t miss entree of Halloween Time at DCA, and I really hope it makes a reprise for Christmas–just emboss a Santa Mater on the top or whatever. 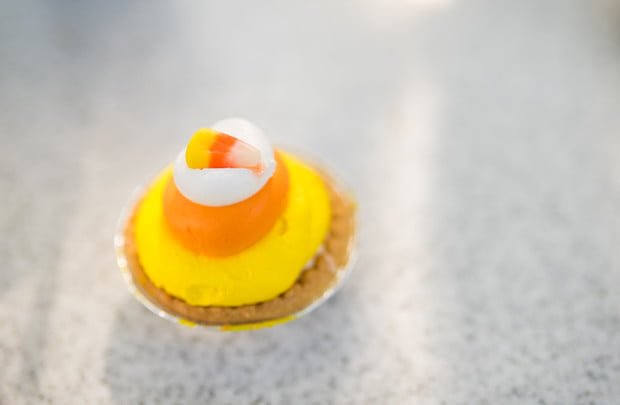 Continuing at Flo’s V8 Cafe, we also have the Mini Candy Cone Pie. This is a miniature cream pie with vanilla, butterscotch and white chocolate pudding…with an emphasis on miniature.

I have mixed feelings about this–the taste was good, the quality was high, and it appeared to be a true ‘artisanal’ dessert, but dang was it ever small. I would not get it again solely on that basis, but I don’t necessarily regret getting it once. If you do choose to get it, just be prepared–this is far too small to share, and it’s not even enough dessert for one person. Still, really tasty. 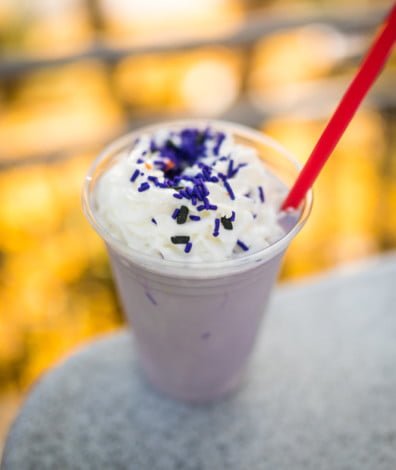 The final Halloween item at Flo’s is the Grape “Ghoul”-ant Shake. This is a grape milkshake that tastes like grape soda.

Our reactions to this were mixed–I loved the flavor, despite it clearly tasting like artificial grape…or perhaps because that’s how it tasted? Something about it was just different, and that worked for me. Sarah, on the other hand, found the artificial flavor (I’m calling it grape soda, if only because they both have a similar artificial taste) off-putting. 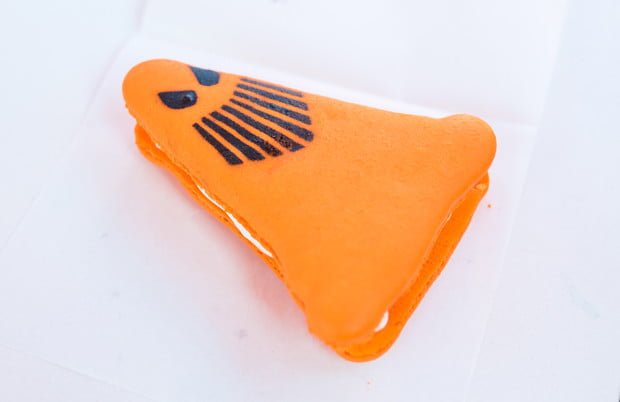 Our next stop was across the street, at Cozy Cone for the Spoke-y Cone Macaron. I’m always complaining about how expensive macarons (one “o”) are, and culinary types are always telling me that they’re time-consuming and expensive to create. Nevertheless, my complaints persist.

Well, no more. This macaron is huge; it’s like the size of maybe 3 circular macarons. This macaron is filled with marshmallow buttercream and candy corn, and is pretty rich in flavor. Before ordering, I thought the candy corn might be a tacky addition to an otherwise higher caliber dessert, but I think they actually work, and provide a bit of texture. It was really good, but rich to the point where you’ll want to split it. This is our #1 dessert pick of Halloween Time at DCA. 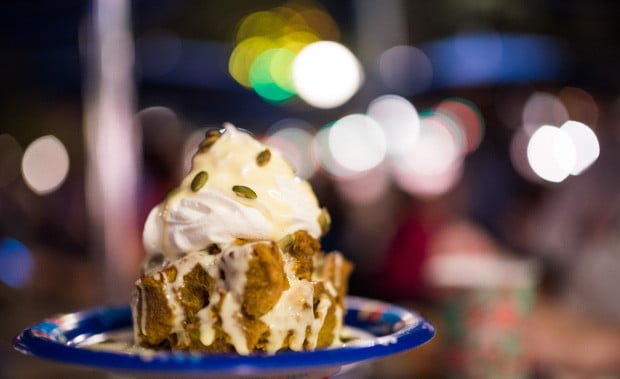 Over at Pacific Wharf Cafe, there’s the Pumpkin Raisin Bread Pudding. For those unfamiliar, Pacific Wharf Cafe always has a seasonal bread pudding (even if it’s not listed on the menu), and it’s usually of the pumpkin variety for the Halloween and Christmas months.

It’s absolutely fantastic, and a dinner consisting of a mac & cheese bread bowl (also off-menu) or turkey pot pie bread bowl plus this for dessert is a perfect way to warm up on a chilly autumn evening in Disney California Adventure. 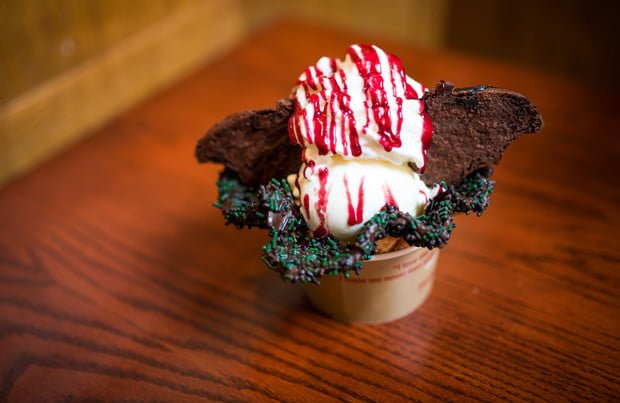 Over at Clarabelle’s Hand Scooped Ice Cream, we have the Bat Wing Raspberry Sundae. This white chocolate-raspberry swirl ice cream with raspberry splatter, blood-red sprinkles, whipped cream, and bat wing cookies is one of the most popular and photogenic snacks of the season.

It also tastes pretty good. Normally, I’m not a big fan of Clarabelle’s, as it’s mostly overpriced Dreyer’s you could get from the grocery store (would it kill them to serve McConnell’s in Disney California Adventure?!), but this is actually pretty good. It’s still on the simple side, and probably near the middle of the pack in terms of these snacks. However, the lineup is pretty stellar, so middle of the pack isn’t too shabby. 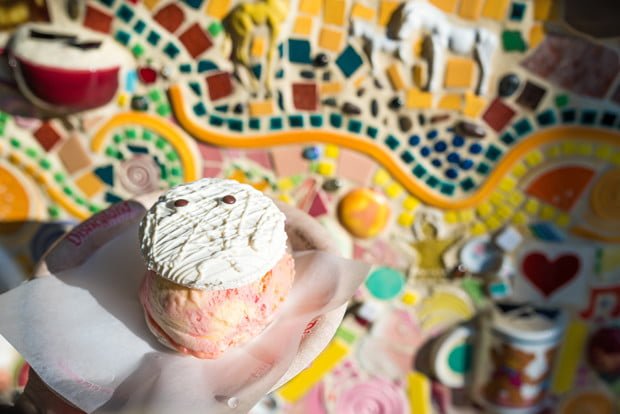 Continuing on to America’s Best Idea, Schmoozies, we have the Mummy Macaron Ice Cream Sandwich. This is an almond macaron shell drizzled with white chocolate and filled with rainbow sherbet.

The whole is less than the sum of its parts here. The rainbow sherbet by itself is good (but super-sweet) and the almond macaron has a subtle flavor that’s quite good. Unfortunately, eaten together, the sherbet totally overpowers the macaron. 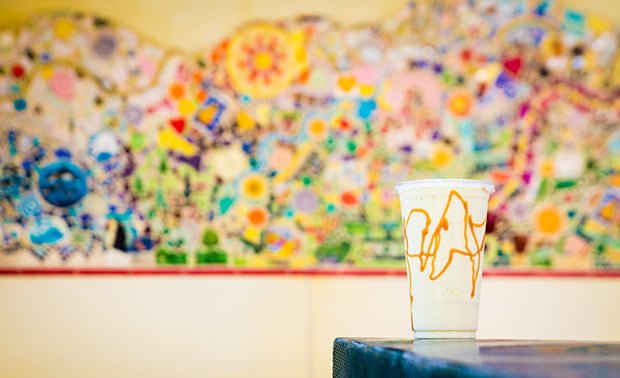 At Schmoozies’ you’ll also find the Caramel Apple Smoothie. This is fresh apple mixed with ice cream and drizzled with caramel. I’m a big fan of this smoothie. (Schmoozies also has a seasonal doughnut, but it’s only served until 11 a.m., and we’re rarely in the park that early.)

People make fun of Schmoozies, but that’s only because they’re jealous of it (at least that’s what my mom tells me). I really love Schmoozies. I think their smoothies are generally good, and reasonably high quality. It also doesn’t hurt that Schmoozies has the best wall in all of Disneyland Resort, and I’m not even kidding about that. 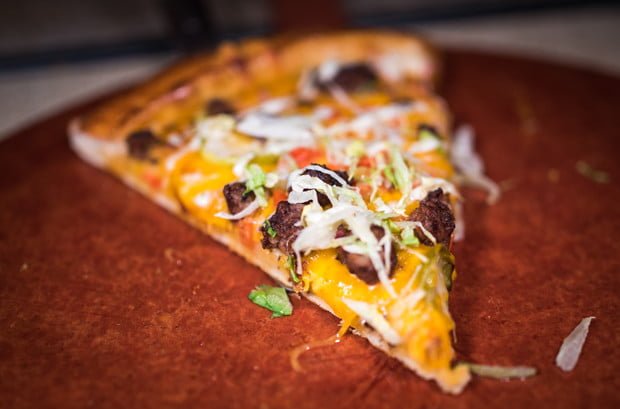 Over at Boardwalk Pizza & Pasta, there’s the Cheeseburger Pizza. I was borderline on ordering this to begin with as their pizza is hit or miss (at best), and when we went in mid-afternoon, this was the last slice sitting under the heat lamp. No way.

We’ll try again on this one when there’s a slice that hasn’t been sitting around for a couple of hours. 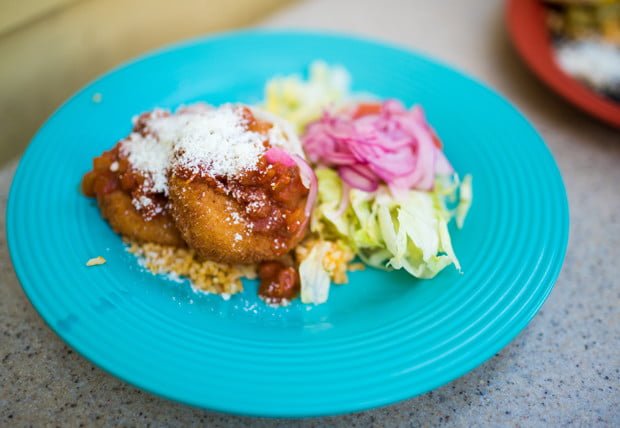 Instead, we tried the special menu at Paradise Garden Grill for Plaza de la Familia, which features “A Musical Celebration of Coco.”

We’ll have a full review of that excellent menu later, but above is a preview of what I had–the Tortitas de Papa Con Queso. They were delicious.

Have you tried any of the Halloween foods at Disney California Adventure? Do you agree or disagree with our assessment of DCA’s seasonal treats? Any questions? Hearing feedback about your experiences is both interesting to us and helpful to other readers, so please share your thoughts or questions below in the comments!