To start, although both parks generally celebrate “Disney’s Halloween,” the tone of each park’s Halloween entertainment is dramatically different. Tokyo Disneyland has everything you’d expect out of a Disney castle park for its Halloween entertainment: there’s a parade, decorations, and fireworks (among other things). In general, it leans heavily on the Disney characters for a cheerful Halloween carnival.

Tokyo DisneySea does not go the “scary” route for Halloween (like Hong Kong Disneyland or Universal’s Halloween Horror Nights), but it definitely has a more adult feel, much like the park itself. The Disney characters still play their part, too, but the entertainment feels decidedly more refined, and works on both an adult level and a child level. Disney does this masterfully in all of its best entertainment (and I’m not just talking theme parks) so to see it in the Tokyo DisneySea shows was pretty cool.

This post covers my thoughts on these pieces of Halloween entertainment at Tokyo DisneySea, plus lots of photos from the “Disney’s Halloween” event. Although this information is specific to my Halloween visit, Tokyo DisneySea presents its Halloween entertainment every year (although specific offerings do change yearly), so this should be useful for future years. Just don’t expect to see exactly what’s pictured here if you visit next year, or beyond.

Enough chatter–let’s take a look at what’s happening at Tokyo DisneySea for Halloween! 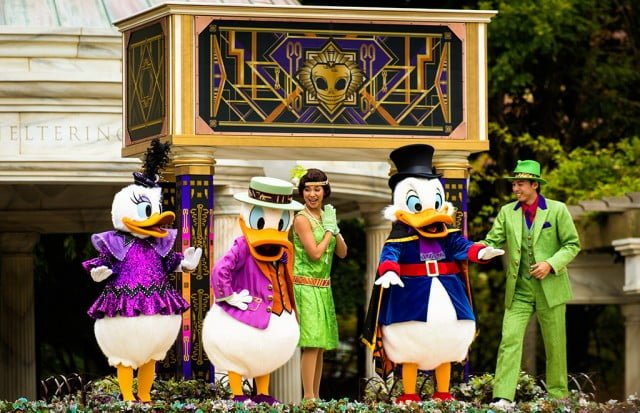 The main draw in terms of scheduled entertainment at Tokyo DisneySea is New York Halloween Follies, held at the Waterfront Park stage in American Waterfront. This show is set in 1920s New York, and features the music, dance, and fashions of the era in a show that features Disney characters, plus human and skeleton performers. People grab spots for this show (performed 3-4 times daily) hours in advance. Fortunately, everyone has to sit down for the show, but it’s still difficult to capture good photos.

On paper, it doesn’t really jump out as anything amazing, but if you’re familiar with American Waterfront, your expectations might be a little higher. I feel like American Waterfront is the forgotten land at Tokyo DisneySea for English-speaking guests. Yes, it has Toy Story Mania and Tower of Terror, but when it comes to the themed ports, all the attention goes to Mysterious Island. Perhaps an amazingly-themed America just isn’t that impressive to Americans? It should be, as American Waterfront absolutely nails early 20th century America, and the painstaking level of detail here is absurd. 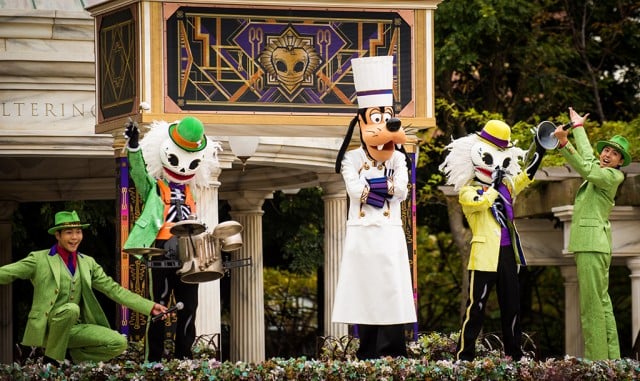 With that in mind, the quality of Halloween Follies should come as no surprise. What the show features is Jazz Era song and dance, along with elaborate flapper-inspired costumes.

This all comes together in one gorgeous production (the male skeletons are all wearing costumes about 2 sizes too big, so it essentially looks like they’re playing dress up with dad’s work clothes, but otherwise, the costuming is excellent). 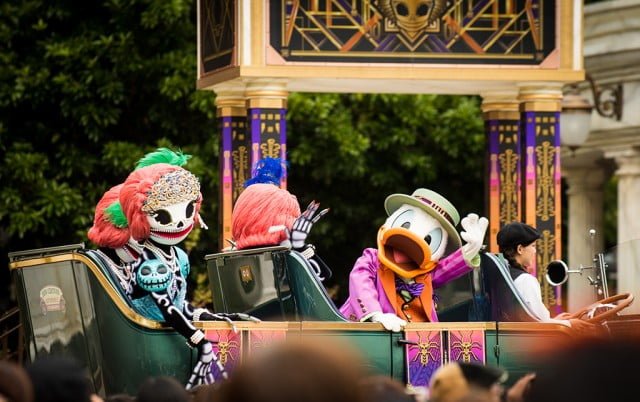 This show is entirely in Japanese, and it was difficult for me to grasp what was going on. I surmised that the plot is more or less that Scrooge doesn’t like the Skeleton Friends, so he brings in his thugs, Chip & Dale, to TCB. Stuff happens, and eventually Scrooge learns the error of his ways and is awarded a skeleton cape for supporting the skeleton cause.

I’m sure there’s actually much more to it, as Chef Goofy appears and a skeleton tosses pizza dough at one point, and large beach balls are thrown into the audience at another point, and neither of these occurrences (or others during the show) quite fit into my plot. 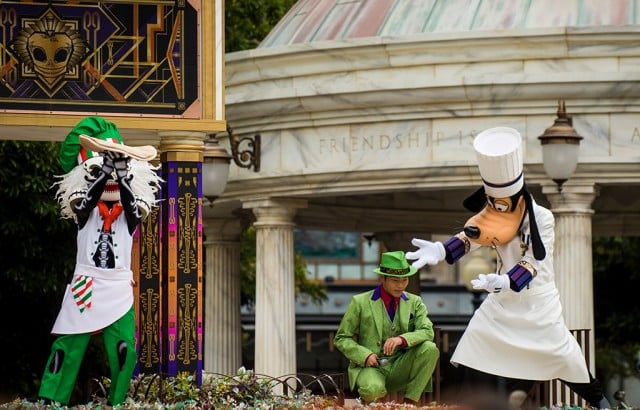 I don’t really think the story is integral to the show here. It’s sort of like that newer Great Gatsby movie with Leo. You’ve got to just enjoy the Jazz Era audio and visuals, because upon closer scrutiny it all falls apart.

I’m not actually sure this show falls apart under closer scrutiny, or if it just didn’t make sense to me because it was in a foreign language. Either way, I’m pretty sure “carefully constructed plot” is not the point of the show.

Welcome Skeleton Friends is the other main show at Tokyo DisneySea for Halloween. This one is held on Lido Isle and is also very popular. To me, this felt a lot like the other “introduction” shows held in this same location for Christmas and Spring Voyage. The upside is that the first half of the show is entirely about the skeletons, as they grab props from boxes on stage and dance around before Mickey & co. show up.

The characters are then fitted for costumes and some other stuff happens, mostly more dancing around. I wasn’t really enamored with this show, but part of the reason why could be because we had an awful view and since (I felt) the production value wasn’t nearly as high here, making it more important to actually understand the show to enjoy it.

As was the case with Tokyo Disneyland, Night High Halloween is visible in Tokyo DisneySea each night. Just as it was a letdown there, it’s a letdown here. It’s a 5 minute long show set to a Halloween soundtrack.

In Tokyo DisneySea, think of it as a post-show to Fantasmic! My recommendation would be to make your way from the Fantasmic viewing area to Cape Cod and watch from the lighthouse area, if you’re going to make a point of watching at all. Viewing the fireworks while in the Venetian Gondolas would probably also be fun (never done that one myself, though). 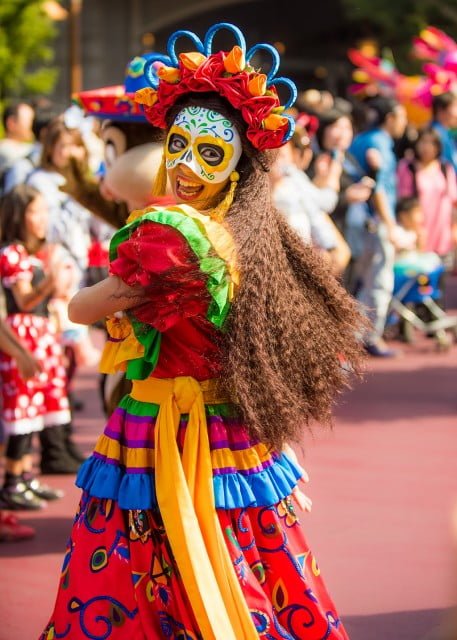 The other “minor” show, Chip ‘n Dale’s Skeleton Fiesta, is what I consider to be the sleeper hit of Halloween at Tokyo DisneySea. 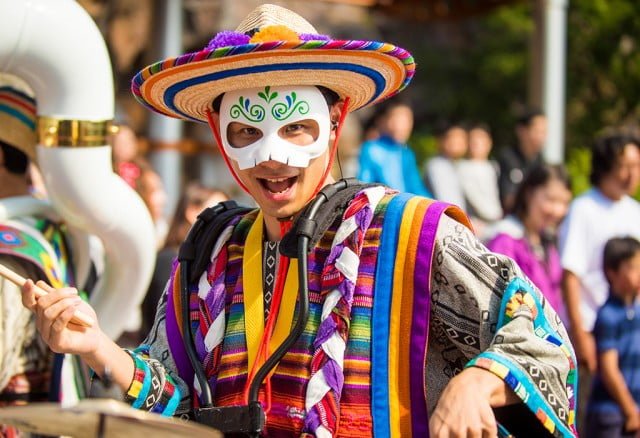 This is a short cavalcade from Port Discovery to Arabian Coast, featuring the Skeleton Friends, some costumed performers, and the Chip ‘n Dale posse. 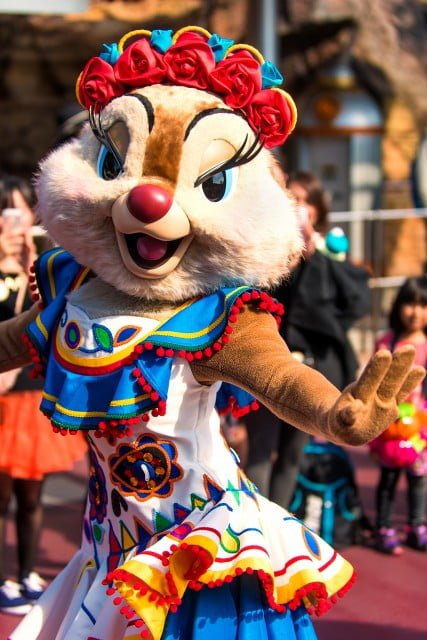 We visited on some fairly busy days, but this show was never popular. We grabbed front row spots literally as the cavalcade started. The relative ease of viewing this piece of entertainment isn’t the only draw. 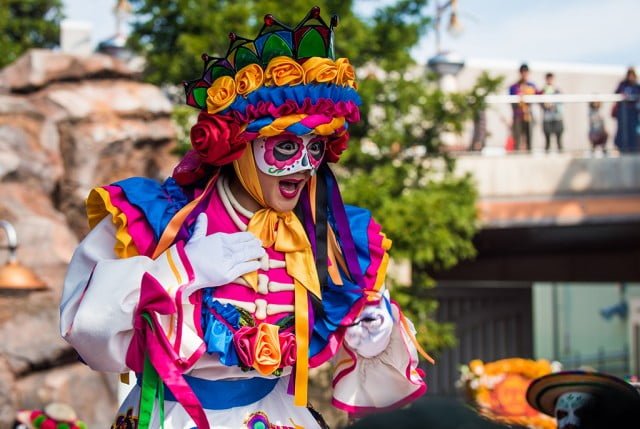 Although it’s short, this cavalcade packs a nice little punch. The costumes are vibrant and well made, and it has a nice energy to it. 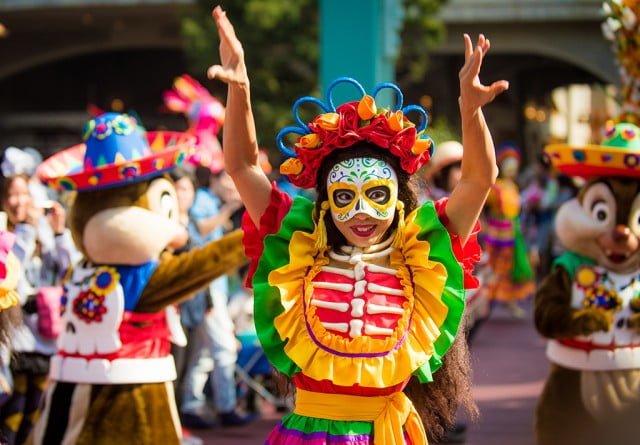 To me, it felt a lot like Disney California Adventure’s “Viva Navidad” cavalcade from last Christmas. Smaller scale than that, but a similar energy and feel. Both capture the energy and look of these traditional Mexican celebrations. Viva Navidad is definitely larger in scale, but this fiesta was a pleasant surprise.

The Skeleton Friends have been mentioned a few times here, and while they aren’t technically an attraction, they are the best attraction at Tokyo DisneySea for Halloween. In fact, they are the best attraction at any Disney park for Halloween. These skeletons are basically roaming troupes of comedic performers. Think Citizens of Hollywood at Disney’s Hollywood Studios…except in skeleton form.

The skeletons perform musical instruments (the ones with violins performing Disney songs are my favorites), mock guests, and have a great brand of visual humor. They come into the restaurants and serenade guests, and just generally have fun.

One of my favorite encounters was as we were sitting in Sailing Day Buffet and the skeleton approached our friend Guy, who said, “oh my god.” The skeleton, speaking through a voice modulator, repeated it again and again, parrot-style, in an attempt to embarrass Guy. It was hilarious.

We mostly saw the Skeleton Friends in American Waterfront and Lost River Delta, and it seemed that no two interactions were the same. Some guests just wanted to pose for photos with them, others wanted to play.

Seeing the off-the-cuff interactions and performances of these Skeleton Friends was a ton of fun, and I spent an inordinate amount of time just standing around, watching them. 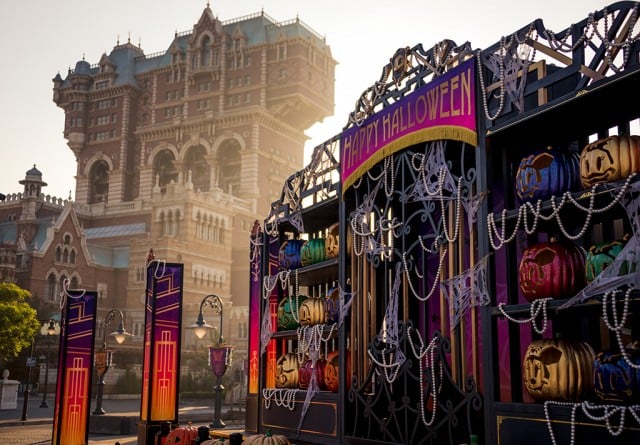 In terms of decorations, American Waterfront (including Cape Cod) and Lost River Delta are where almost all decorations are found.

Most of the Halloween decor is confined to these two ports of call, aside from some minor decor at the front of Mediterranean Harbor. 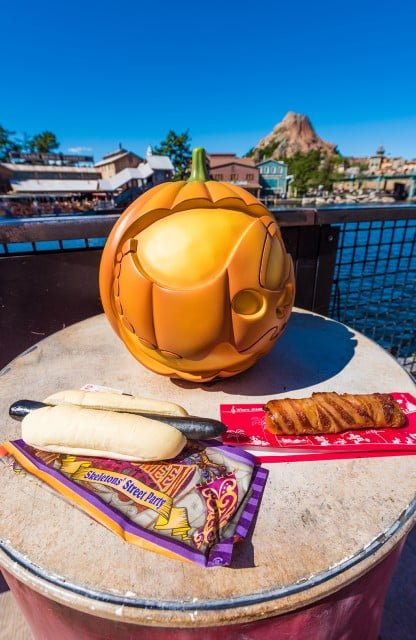 Rather than fixating on the special Halloween food, I’m just going to share the photo below of a triceratops pumpkin, Mount Prometheus, a black hot dog, and bacon-wrapped rice.

This one photo pretty much sums up everything that’s great about Tokyo Disney Resort. Okay, maybe not, but this is a lot of awesome in one photo, right?! 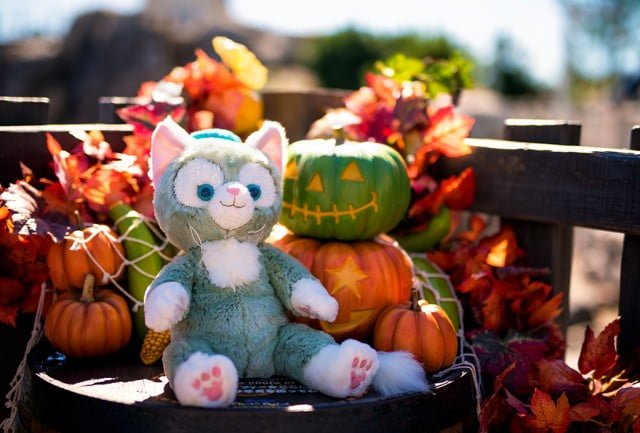 Like Tokyo Disneyland, there is a variety of Halloween merchandise at Tokyo DisneySea for Halloween. The highlights are probably the Gelatoni and Duffy stuff.

This merchandise was released a few weeks prior to our arrival, and we heard tales of 3-hour long lines for Aunt Peg’s in Cape Cod. I think all of the limited edition Duffy, Shellie May, and Gelatoni Halloween merchandise sold out that morning. 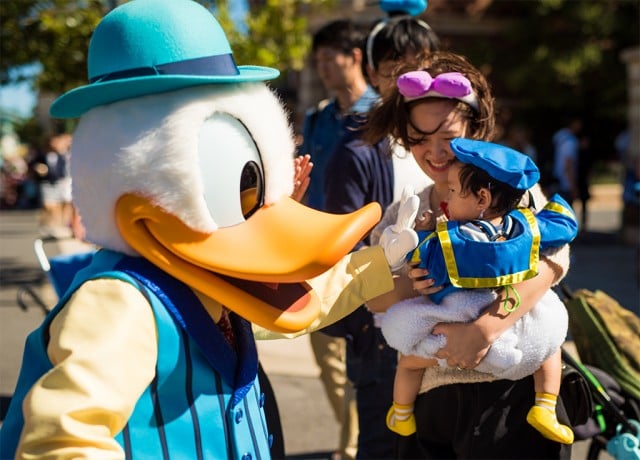 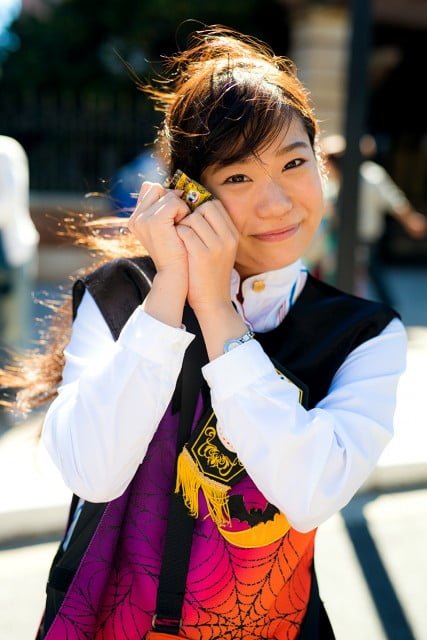 Oh, one last thing: there’s random trick or treating. Being able to say “trick or treat” to one of these Cast Members for a piece of candy is a nice touch. Okay, that concludes our look at Tokyo DisneySea during the Halloween season. If you’re interested in seeing more, read our Halloween at Tokyo Disneyland post!

Have you visited Tokyo DisneySea for Halloween? Does a Halloween visit interest you? If you have any other comments or questions about Halloween at Tokyo DisneySea, post them below and we’ll try to answer!

7 Responses to “Halloween at Tokyo DisneySea”