This post takes a look at Tokyo Disneyland’s Halloween celebration, with photos plus my thoughts about the “Disney’s Halloween” event. While Tokyo Disneyland celebrates Halloween every fall, making the general information here useful for future visits, it is worth noting that their entertainment, parades, and other things sometimes change yearly, so don’t expect to see exactly what’s pictured here if you visit next year, or beyond.

Halloween offerings at Tokyo Disneyland are included in regular park admission, and at just under $60 for a 1-day Tokyo Disneyland ticket, a full day at Tokyo Disneyland is actually cheaper than the hard ticket Mickey’s Not So Scary Halloween Party at Walt Disney World! Of course, you will have to get to Japan in the first place, which is not exactly a cheap proposition, but as I’ve been stressing here for some time, these are the two best Disney theme parks in the world.

With that said, let’s take a look at what’s happening at Tokyo Disneyland for Halloween!

The Happy Halloween Harvest Parade is the main entertainment draw at Tokyo Disneyland, and like every Tokyo Disneyland parade I’ve seen, it’s very well done. This parade has 7 floats and a number of performers between the floats.

Like other parades at Tokyo Disneyland, there is a “pose game,” during which the characters do one pose and guests respond with another. This is taught to the guests before the parade starts, and is a hoot to watch. For the longest time, I thought it was some sort of pre-show dance-thing…

The highlight of this parade for me is the soundtrack. The music is absolutely infectious, and will get stuck in your head for days. As good as this parade is, I have to say that it doesn’t compete with the Boo To You Parade during Mickey’s Not So Scary Halloween Party.

With that said, this parade is included in normal admission, and it would be nice if Walt Disney World gave its Halloween parade a big refresh–it has been virtually unchanged for several years now. 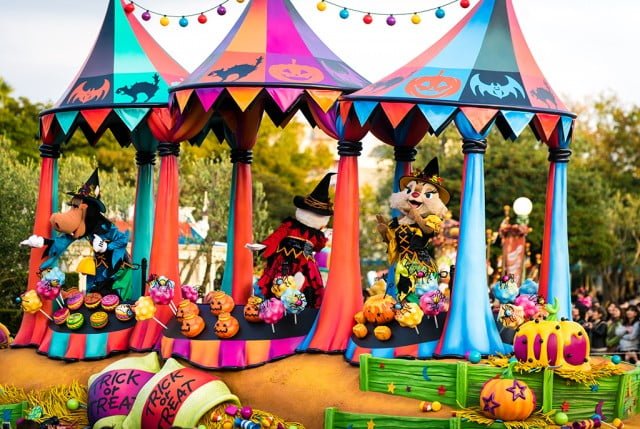 There’s a float with Clarice, Daisy, and Clarabelle… 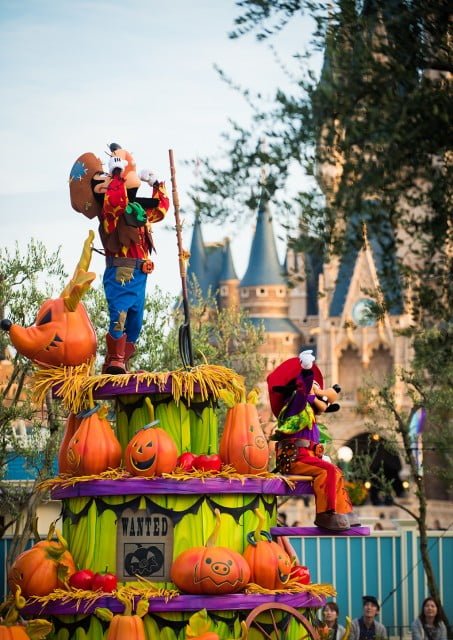 There are several characters who are featured prominently in the Tokyo parks that are somewhat forgotten in the US. Max is one such character.

Winnie the Pooh and friends have their own float. It’s somewhat of a short parade, but it packs a lot of punch. The costumes are clever and there’s a good amount of detail in the floats.

Jack Skellington plays Sandy Claws as he makes a good-faith, but wholly misguided, attempt at presenting his version of a Christmas celebration. The result is a like a nightmare-ish attraction by Courier and Ives. 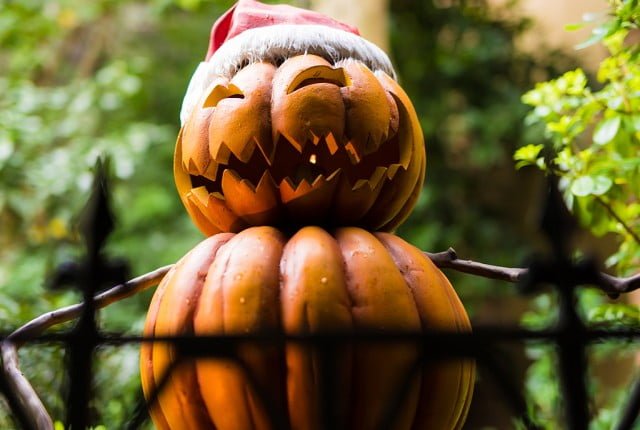 In fact, there are fairly strong rumors that this version was originally fabricated for Florida’s Haunted Mansion (Tokyo’s Haunted Mansion is modeled after Magic Kingdom’s), but Walt Disney World management declined the overlay. Whether this is true or not is anyone’s guess, but it’s a good story, and one I’ve heard from many different people.

Like the Disneyland version, this isn’t simply a matter of throwing a few pumpkins and Jack Skellington cutouts into the normal Haunted Mansion scenes and calling it a day.

For the holidays, Haunted Mansion becomes an entirely new attraction, with a completely new storyline and script, and show scenes that are familiar, but have been so dramatically transformed in some places that they’re barely recognizable.

Basically, you are seeing vignettes of the two holidays colliding. Although I enjoy the clever narration heard during Disneyland’s version, it’s not at all important to understanding what’s happening.

She is actually as prominent as Jack Skellington. Unfortunately, it doesn’t seem that Tokyo Disneyland has upgraded its original version as much as Disneyland, so there aren’t as many Audio Animatronics, nor is there a new ballroom cake each year. 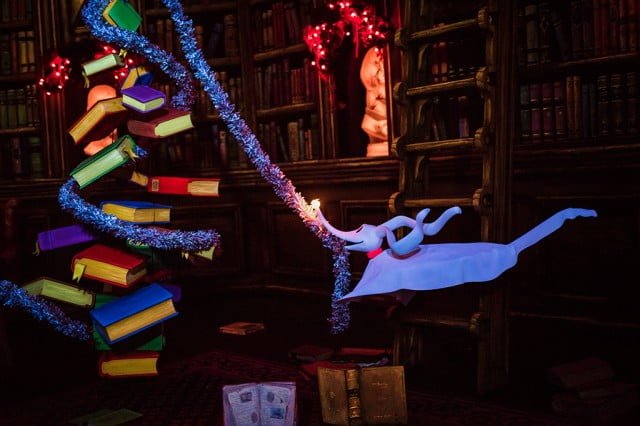 Depending upon your perspective, this is either a fun part-time overlay or a tacky, visually-busy, and needless overlay of a classic Disney attraction.

Judging by the lines we’ve witnessed for Haunted Mansion Holiday Nightmare during the Halloween and Christmas seasons as compared to lines for the normal version other times of year, Japanese guests generally fall into the former category. This is an attraction to do early in the day, late at night, or with FastPass.

It’s aimed squarely at kids, and the Halloween “version” really is just the normal show with a Halloween motif.

Assuming it’s shown (my experience is that the fireworks in Tokyo are canceled around 50% of the time…even a light breeze seems to do the trick!), expect a 5 minute long show that is not centered behind Cinderella Castle and doesn’t really feature the kind of choreography found in virtually any other Disney fireworks show.

The Night High Halloween fireworks seem about the same in quality as any other show, except set to Halloween music. The bursts seem to use more oranges than other shows, but otherwise, the fireworks themselves aren’t particularly festive. Still, tough to complain.

That’s it in terms of attractions and entertainment, and based on the above, you might think that Tokyo Disneyland’s Halloween offerings are fairly sparse. One of the difficulties of reading about an experience as opposed to, well, experiencing it, is that you don’t get the full picture.

Tokyo Disneyland’s Halloween is anything but sparse. The experience is all about the ambiance, and it has that in spades, with decorations, food, and other guests all being key.

In terms of decorations, the mantra for castle parks at holidays often seems to be “decorate Main Street and call it a day.” This isn’t necessarily a bad thing, as it is possible to overwhelm with seasonal decor.

Tokyo Disneyland at Halloween breaks from that mold (World Bazaar doesn’t really have much in the way of Halloween decor) with the park entrance, Central Plaza, Frontierland, and Toontown being home to most of the park’s decorations.

These decorations really are top-notch. Disney’s Halloween this year is supposed to be styled after “Funny Monsters” and I’m not really sure how that’s reflected in the decor, but the decor is nonetheless awesome.

There are playful ghosts on display all over the place, and they add so much more to the park than just simple pumpkins here and there.

What makes the decorations so great is not just their quality, but that they have a cartoonish and “Disney-esque” quality to them. Even if I saw these decorations outside of the park, they would remind me of Disney. While they are not necessarily on-theme in Frontierland (they do seem to fit perfectly in Toontown), they liven the atmosphere in a great way, and provide a playful contrast to Frontierland that works well, and gives the land a little more character. At no point do they look cheap or “off the shelf.”

Then there’s the food. Oh, the food! Tokyo Disneyland is always a snacker’s paradise, and the seasonal snacks are no exception. Do you like pumpkin? If so, you’re in luck, because so too does all of Japan. Everywhere we went throughout Japan, we saw pumpkin snacks. Tokyo Disneyland was no exception, where pumpkin snacks were virtually everywhere. One of the coolest was the pumpkin doughnut, although the “black pizza” (that we didn’t try) was pretty popular, too. 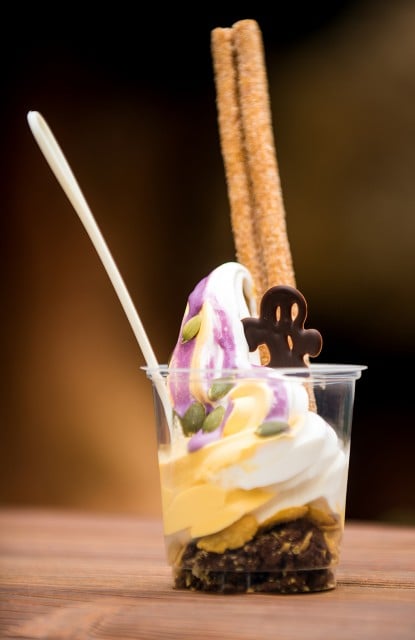 A variety of Halloween merchandise is also prevalent at Tokyo Disneyland for Halloween, and fortunately, we managed to resist most temptations to buy, and purchased only a pair of Halloween ears. Relatively unscathed.

I wanted the “FrankenGoofy” hat, but ended up balking at the price. You can see more of the food and merchandise available for Halloween at Tokyo Disneyland here. 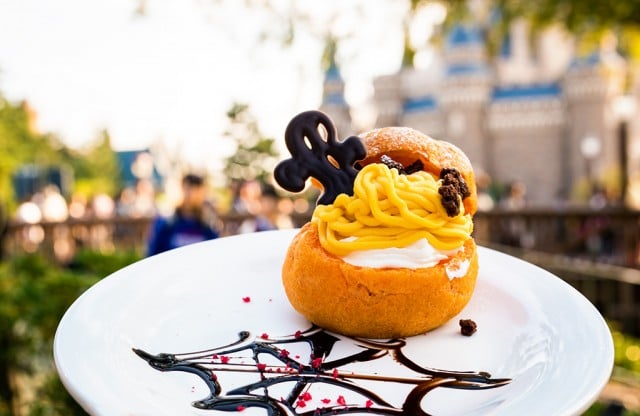 In addition to the Halloween merchandise a good chunk of guests wear or carry, you’ll see plenty of outfits that border on being costumes. On any given day at Tokyo Disneyland, you’re likely to see some guests that appear dressed in costumes. This goes for the entire year, not just Halloween, although we did spot more costume-like outfits during the Halloween season (especially duck-butt on kids!).

Passionate fans often wear “kawaii” outfits that might appear to be costumes to the casual observer. Seeing the real costumes that guests are allowed to wear the first and last weeks of the Halloween season make it abundantly clear that these kawaii outfits are just that–outfits. The Japanese take costumes and cosplay seriously, and make the costumes seen in Walt Disney World and Disneyland for the Halloween parties look like amateur hour. 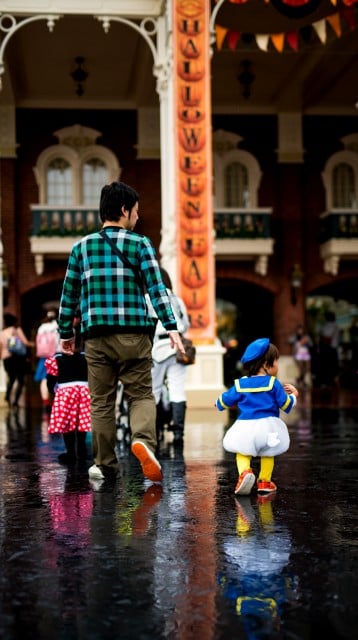 Unfortunately, we didn’t have the chance to visit Tokyo Disneyland during the “serious” Halloween costume season. Although it would have been really cool to see, this was partially by design, as we have heard horror stories about the parks reaching capacity early in the morning (sure enough, I saw photos of popcorn lines with 4 switchbacks from the costume weekend!).

I still think it would be cool to go, as some costumes look amazing. Here’s a look at some costumes from a couple years ago so you can see what I mean. Note the Tony Solaroni costume…amazing.

That about does it for our look at Tokyo Disneyland during the Halloween season. Check back later this week as we pay a visit to Tokyo DisneySea for Halloween!

27 Responses to “Halloween at Tokyo Disneyland”