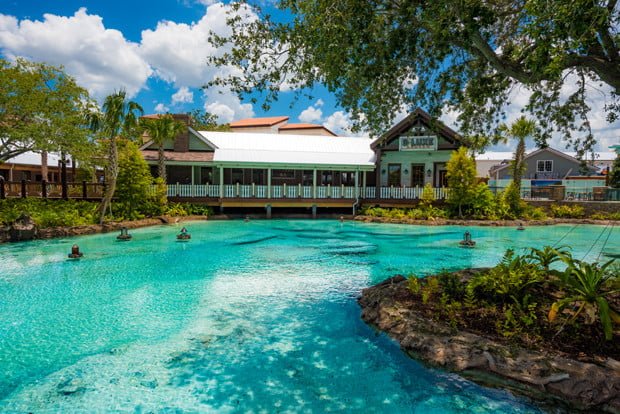 Construction work at Disney Springs remains ongoing despite the majority of new restaurants and retail having opened about a year ago (at least). In this post, we’ll walk around Town Center, Landing, West Side, and Marketplace at Disney Springs, sharing photos of what’s going on behind the construction walls.

I’d describe this as Phase 2 of the Disney Springs project. Well, it could be more like Phase 5 or 7 depending upon whether you count the closure of Pleasure Island, Hyperion Wharf, and everything that happened in between the unofficial “end” of Downtown Disney and the beginning of Disney Springs. Whatever the phase, work now in large part consists of redeveloping dated remnants of the old Downtown Disney area that felt stuck in the 1990s.

This Walt Disney World trip, I spent a full-day at Disney Springs, having lunch at B.B. Wolf’s Sausage Co, and dual dinners at STK and Paddlefish. (Yes, this was all in a single day. What can I say: I like to eat.) This was actually slightly less time than we’ve spent at Disney Springs in recent trips; as we’ve stressed in recent posts, you can easily do 3-4 meals at Disney Springs per WDW vacation…

As I’ve also mentioned in the past, this is my favorite incarnation of the Lake Buena Vista Village/Disney Village/Downtown Disney/Disney Springs area. Thematically, this entertainment district has been fairly generic (my memory only dates back to the Disney Village), but this is the strongest version in that regard.

Sure, there are aspects I don’t like, such as the overuse of hipster-esque “repurposed” spaces, almost all of which look like someone decorated a barn with stuff from the clearance aisle of HomeGoods. While some of these interiors leave something to be desired, and other instances of repurposing are not ideal, the layout, bridges, and water features are all considerable upgrades. Disney Springs is a much more inviting place than this area was 5 or even 10 years ago.

With that said, let’s look at what’s going on at Disney Springs right now… 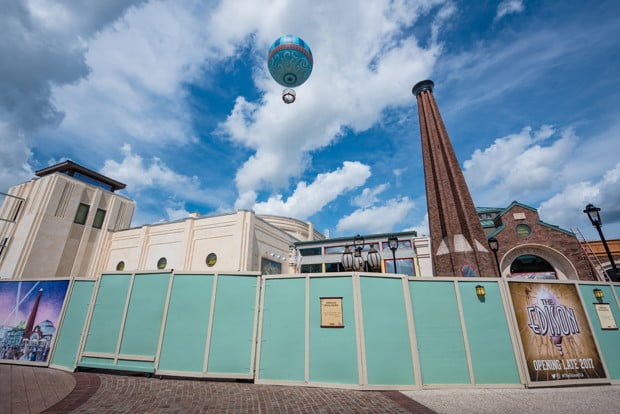 We’ll start with the location about which I’m most excited: The Edison. There are still signs out front indicating that this is slated to open in Late 2017, which is about a year after it was originally slated to open, I believe.

In looking at the photos we have, and in watching progress from the dock below, it really looks like there’s still a lot of work to be done. Frankly, I’d be surprised if opens before 2018. Whenever it does open, expect the Edison to be the new hot spot for nightlife at Walt Disney World.

Below is a side view. You may not be able to tell from this photo, but the interior looks like it has a long way to go… 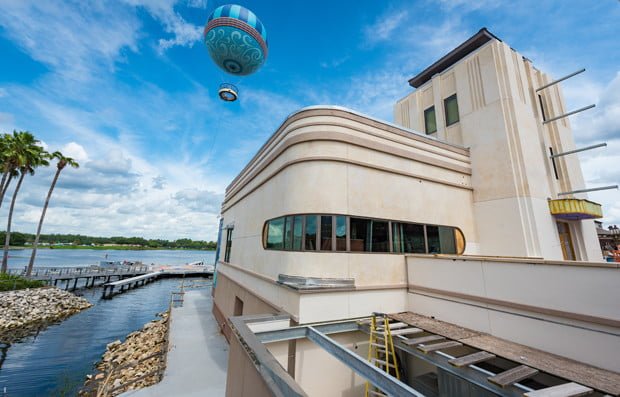 The Edison has a location in downtown Los Angeles, and it’s one of the trendiest spots in DTLA. As far as themed venues in the real world go, the Edison seems to capture the essence of the roaring 1920s, even featuring cabaret on some nights.

The Los Angeles location is also very hip and has an incredibly stringent dress code (“sophisticated and cultured attire is required”) that prohibits tennis or athletic shoes, collar-less shirts, and shorts, among other things. In other words, minimum attire that’ll never fly at Walt Disney World.

I’m still interested to see just how far this pushes the envelope on refined nightlife. Orlando is very different than Los Angeles, so obviously some aspects of the location will have to be relaxed. On the other hand, Walt Disney World allows it some latitude in being more ambitious thematically, as that’s the kind of experience guests come to expect. It’ll be interesting to see where this version of the Edison lands. 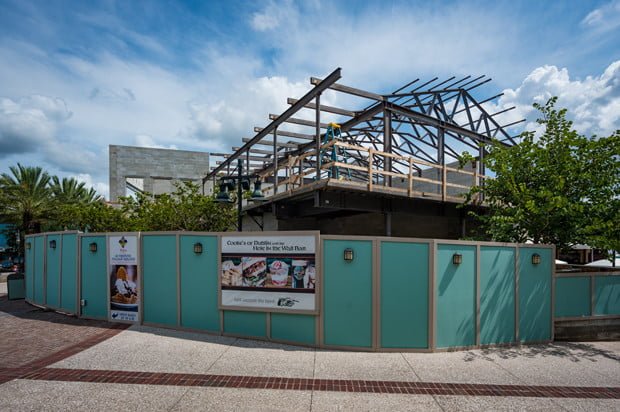 Nearby, we have ongoing work on Wine Bar George.

In case you’re unfamiliar with it, Wine Bar George will be themed to a 6,000 square feet renovated winery. It will feature wood ceilings, warm lighting, and an inviting old world atmosphere. 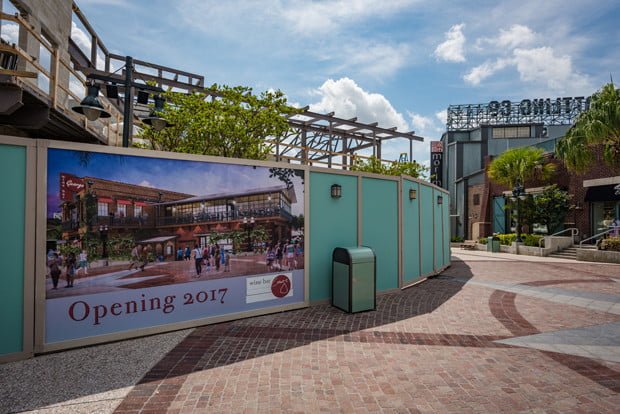 Despite the delay, Master Sommelier George Miliotes (I guess he’s the eponymous George?) is slated to make four appearances at Walt Disney World during Epcot’s Food & Wine Festival events. Beyond in-park stuff, he’ll also be at the Four Seasons and STK. 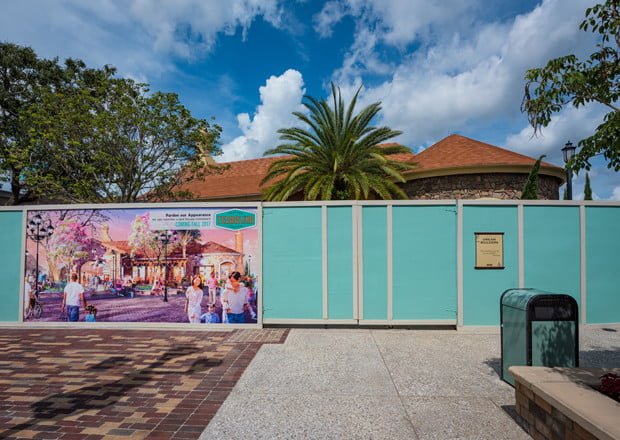 It was hard to get an idea of how far along the Portobello to Terralina conversion has progressed, since most of the work is occurring inside the building, and walls pretty well conceal everything. We haven’t heard about any delays to the project, so we’d expect it to open soon-ish.

This new concept is slated to open in Fall 2017 as Terralina Crafted Italian. As you might recall, Portobello closed earlier this spring with an announcement that it was being re-imagined as a totally new restaurant concept to open in early Fall 2017. 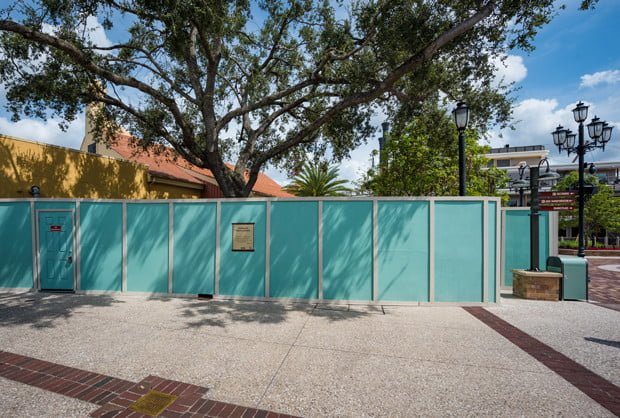 Walt Disney World has released additional information and concept art if you’re curious as to how this will look. Terralina Crafted Italian’s multi-million dollar makeover will retheme it to an Italian home—complete with an open kitchen, dining rooms with eclectic decor, and a new veranda bar—in Italy’s Lake District.

James Beard Award-winning Chef Tony Mantuano has created Terralina Crafted Italian’s new menu, and Chef Justin Plank will be back to run the kitchen. Chef Mantuano’s authentic Italian cuisine will include artisanal pizzas and fresh vegetable dishes fired up in a wood-burning oven. 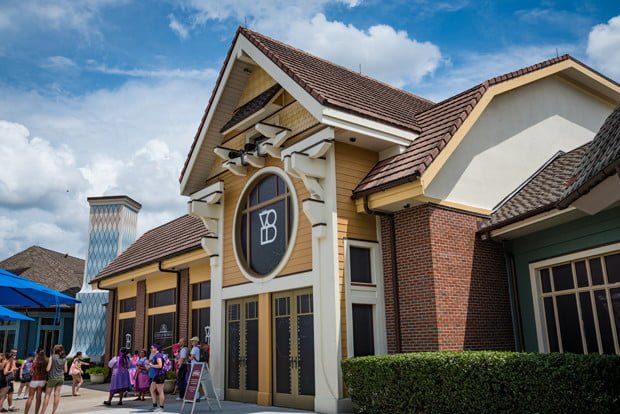 Backtracking a bit, this building next to World of Disney is going to be VOID’s hyper-reality experience, Star Wars: Secrets of the Empire. This VR Experience will open this holiday season at both Disney Springs and Downtown Disney in California.

The press release said this about the Star Wars VR Experience: “Star Wars: Secrets of the Empire will transport you to a galaxy far, far away where you’ll be able to engage with friends, family and Star Wars characters through sight, sound, touch, smell, and motion. It’ll even allow environmental effects to be felt using Haptic feedback — melding the physical and digital worlds together.” 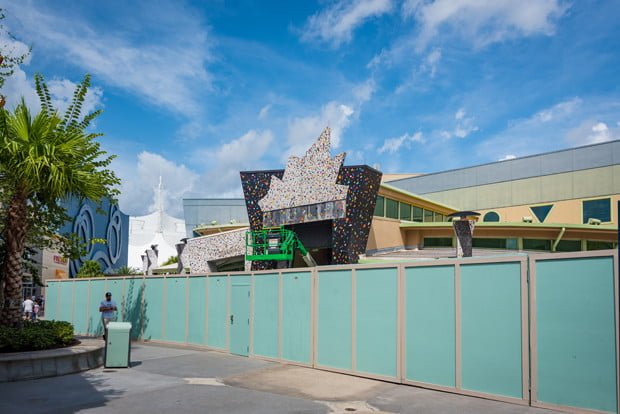 Closing at the end of last month, renovations on the old Wolfgang Puck location are progressing pretty quickly. I’m guessing there’s a ton of work to be done here, as Wolfgang Puck aged about as well as some neon Hammer pants and an acid wash denim jacket.

I’m only partially kidding. It’s really astounding that this Wolfgang Puck “only” opened 20 years ago. It had all the hallmarks of a 1993 vintage. Maybe they should’ve just stuck it out…only a few more years and it could’ve had a 50’s Prime Time Cafe kind of kitsch! 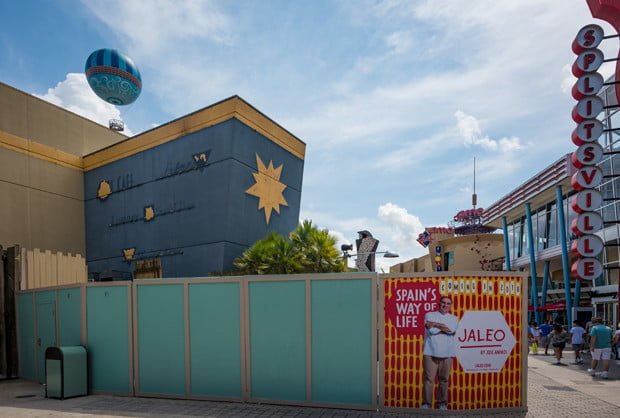 Wolfgang Puck will be replaced by Jaleo, a concept by world-renowned Chef José Andrés’ ThinkFoodGroup. The new restaurant will open sometime in 2018, and is expected to bring the “spirit and flavors of Spain” to Disney Springs.

Jaleo will feature an extensive menu of tapas that reflect the rich regional diversity of traditional and contemporary Spanish cuisine, such as paella cooked over a wood fire, hand-carved Jamon Iberico de Bellota, and wood-grilled Iberico pork. 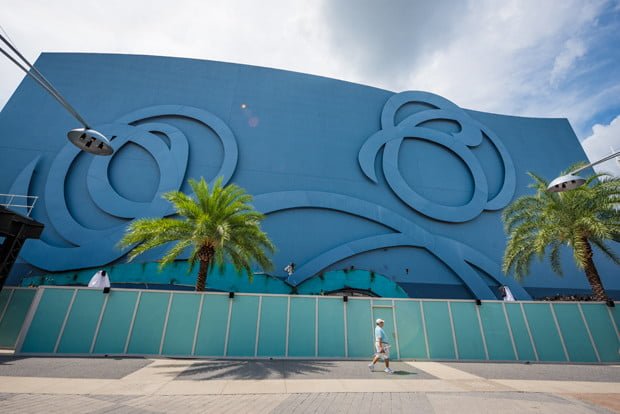 Every time I write about DisneyQuest closing, I feel compelled to double-check whether the NBA Experience project is still on, or whether it’s been quietly canceled.

I’m hoping the NBA Experience is cool and doesn’t flop hard, but I’m concerned that there’s so little buzz about this. Does anyone care? With such a huge space, it would’ve been nice to have this location gutted and turned over to Imagineering for a blank-slate design. Then again, maybe that’s just me… 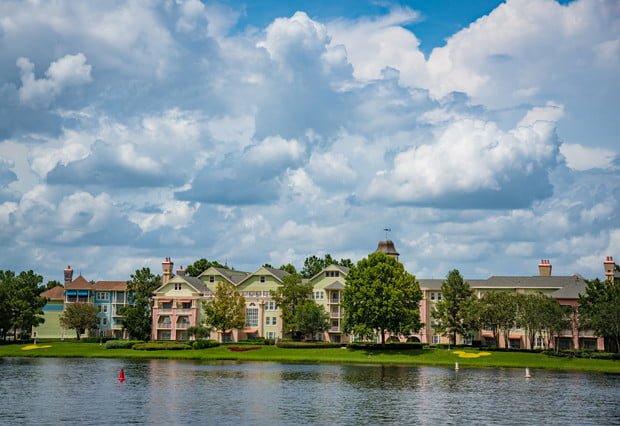 We’ll end the update with a look across the water. As we’ve written in our Saratoga Springs Resort Review, that DVC property is now much more desirable as a result of the wonderful dining additions at Disney Springs.

Saratoga Springs strikes us as a bit bland thematically, but the resort has definitely grown on us…primarily since it’s within walking and boat distance of Disney Springs.

That’s it for this update on Disney Springs. Hopefully, the next time we bring you one of these updates, it’ll include a photo tour of the Edison (and whatever else has opened then).

Are you excited for any of the restaurants that will be opening at Disney Springs in late 2017 or 2018? Any thoughts on the Edison? Other construction insights or observations? Any questions we can help you answer? Hearing feedback about your experiences is both interesting to us and helpful to other readers, so please share your thoughts below in the comments!