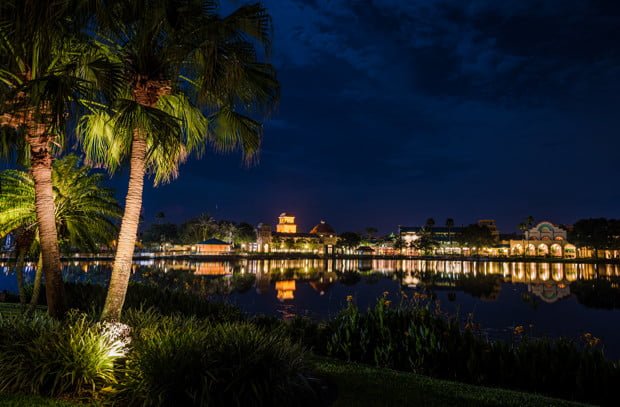 Walt Disney World is currently adding a 15-story tower to Coronado Springs Resort, meaning part of the resort-hotel is a construction zone. In addition to that, there are ongoing room refurbishments and other enhancements going on as part of this expansion. In this post, we’ll take a tour of Coronado Springs, and offer some insight as to whether you should stay here during your Walt Disney World vacation between now and 2019.

For those who read our Caribbean Beach Resort Construction Update, the story here is a familiar one. A high-rise hotel tower being added adjacent to lobby and main dining facilities, replacing some hotel rooms. In addition to that, ‘plussing’ will occur to other facilities to better-match the quality of the new tower.

If you’re unfamiliar with this Walt Disney World construction project, here’s a recap of what has occurred thus far. In February, Disney announced the hotel expansion, with news that a 15-story tower overlooking Lago Dorado would be added to Coronado Springs Resort.

The high-rise addition is being built adjacent to the main building (“El Centro”), and within a day of the official announcement by Disney, construction walls went up around Cabana 9B, and the demolition process began. Construction progress has continued at a swift pace since then.

Details indicate that the Coronado Springs project will add 500 rooms, including suites and concierge-level services. In terms of amenities, a rooftop restaurant with panoramic views of nighttime fireworks from Epcot and Disney’s Hollywood Studios would be included in the high-rise project. 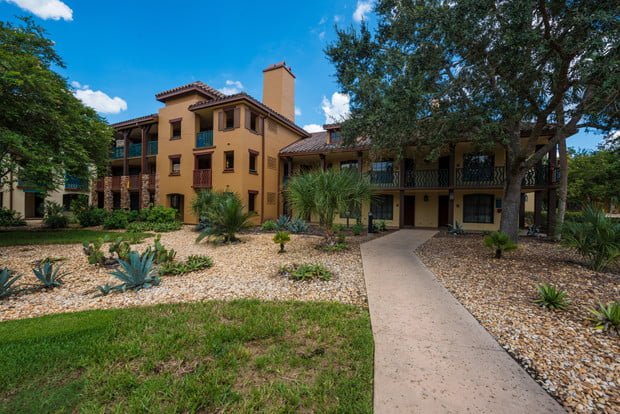 Beyond that, Coronado Springs Resort is in the process of refurbishing its current rooms; I’m not sure when, exactly, this will end. The only info Walt Disney World has provided is that it’ll be “through 2017.” The resort is also transforming its landscape with floating gardens and an island that connects the resort through a series of bridges. An over-the-water restaurant is also slated to be added to the center of Lago Dorado.

In other words, a lot is going on at Coronado. 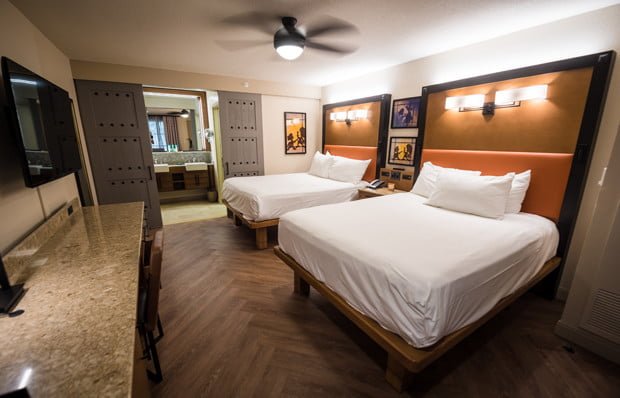 We stayed here on this trip to Walt Disney World in order to experience the newly refurbished guest rooms. In our soon-to-be-updated Coronado Springs Resort Review, we had positive things to say about the old rooms, calling them the “nicest Moderate Resort rooms.” Above is a preview photo from the new room in which we stayed.

I’d offer some thoughts on the room here, but then what reason would you have to read our upcoming Coronado Springs refurbished rooms post?! We have to dispense nuggets of information sparingly, to keep you coming back. (Kidding, of course. The new rooms are nice and we really liked them, even if they are a lateral step in some regards.) 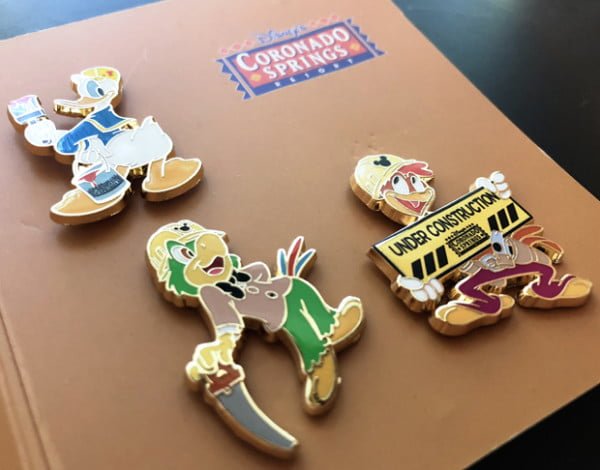 Here’s the ‘pardon our dust’ pin set left in guest rooms during construction at Coronado Springs. It should be noted that the pin set at Caribbean Beach only has 2 pins. Those guests (well, some of them) also receive a $75/night gift card, so the obvious conclusion one can draw is that the third pin in this set is worth $75. That’s sound logic, right? 😉

Unlike Caribbean Beach Resort, the construction project at Coronado Springs does not lend itself to an “exciting” update. You cannot get close to the work at Coronado, which is good for actual guests, but bad for bloggability. The only thing you can really see from a distance is the giant crane towering over everything. 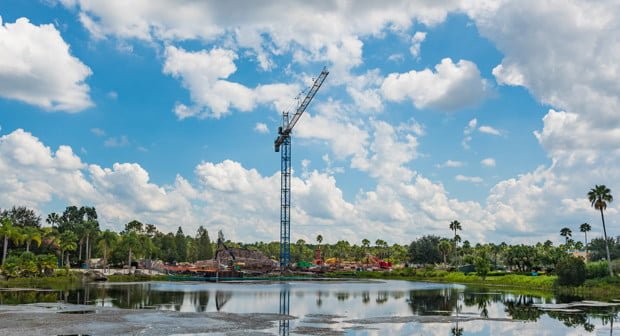 Aside from the times I was actively seeking it out for the sake of this update, we never noticed the construction during our stay at Coronado Springs. It wasn’t visible from our building or any of the buildings I wandered around while taking photos of the resort.

We even napped during the middle of the day once and never once heard any noise from the construction. Even walking around outside around the buildings while on the phone with Delta (T-Mobile reception sucked in our room) for over an hour, I never had any issues with noise. 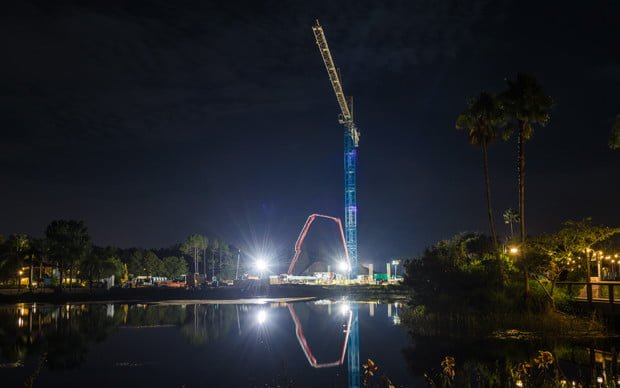 I did notice that work lights were on pretty late, but again, this was only visible in areas of the resort away from guest rooms. This shouldn’t be noticeable from guest room areas.

I don’t anticipate any of this changing as construction progresses. At some point, Lago Dorado will be impacted more as a result of the over-the-water restaurant being built, but even that isn’t really going to impact the other facilities. The huge upside to the construction at Coronado is that the facilities in El Centro and at the Dig Site Pool are in no way impacted during construction.

While wandering around the Dig Site, I wasn’t even bothered by the construction–and it’s directly across from the pool. I could see this getting slightly worse at the Dig Site as the tower goes vertical, but even then it’ll just be noise and some visual intrusion. You won’t have the same problem with construction walls around the perimeter of the pool area adding a claustrophobic vibe to the area. 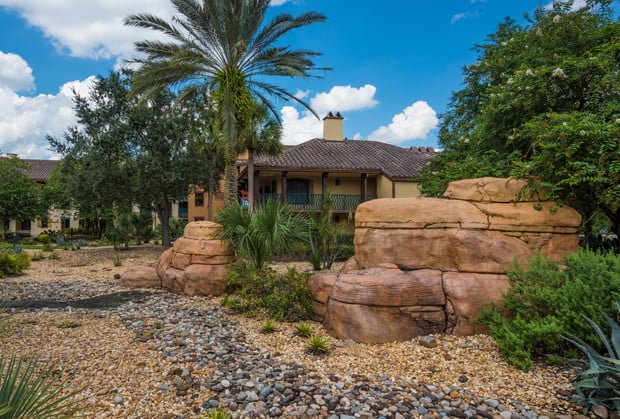 I think a big difference in our impression of the work at Coronado Springs versus the work at Caribbean Beach is the scope. I lamented the views of the cranes and construction site at Caribbean Beach, but part of the issue there is that the tower is just one component of a sweeping project that touches all areas of the resort. There, it could be viewed as the straw that breaks the camel’s back.

By contrast, everything else at Coronado, at least on the outside, is business as usual. Common areas that are accessible to guests are not a sea of construction walls, you don’t have to dine in a tent, and there aren’t trucks peddling merchandise. From our perspective, this is all a huge positive for Coronado. 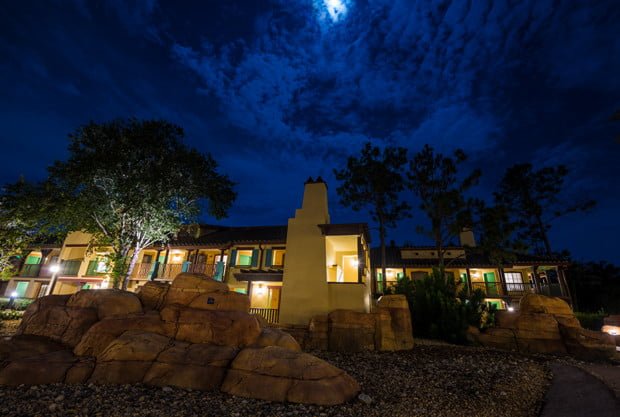 Part of the difference might also be the layout and natural atmosphere of the resort. For me, the ‘essence’ of Caribbean Beach has always been its relaxed, tropical vibe. That has been obliterated by construction. Coronado Springs has never been quite as laid back, having a bit more of a rustic yet burgeoning development. (Heck, even the name of the pool area suggests development!)

While walking around the Ranchos and Cabanas (the buildings closest to the construction) taking photos, no work was even visible the majority of the time. This could be a matter of how the walkways and common areas are arranged–or just an aberration in my anecdotal experience–but I saw a lot less of the high-rise construction at Coronado Springs than I did while wandering Caribbean Beach. Your mileage may vary on that one. 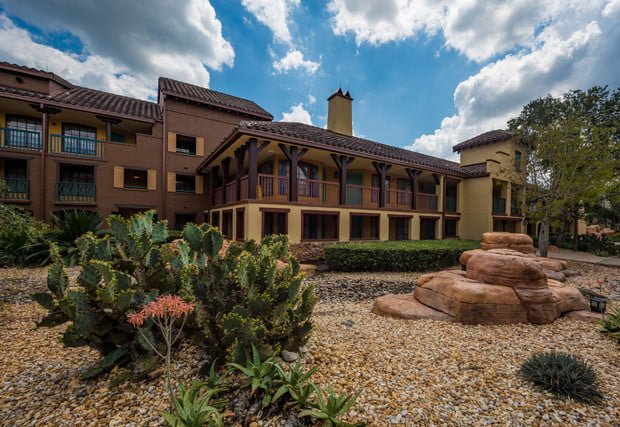 This is all a long-winded way of saying that we would not discourage anyone from staying at Coronado Springs Resort now or at any time between now and 2019. To the contrary, I’d actually actively recommend it to people right now, especially those who like thematic integrity who are wondering how the heck a 15-story tower is going to fit the style of this resort. (Answer: it won’t.) While the tower component of the expansion project at Coronado is similar to what’s happening at Caribbean Beach, the difference in overall guest experience is night and day.

Do you agree or disagree with our take on the construction at Disney’s Coronado Springs Resort? If you’ve stayed there since work started, how–if at all–did it impact your vacation? Would you recommend CSR during construction to others? Any questions we can help you answer? Hearing feedback about your experiences is both interesting to us and helpful to other readers, so please share your thoughts below in the comments!