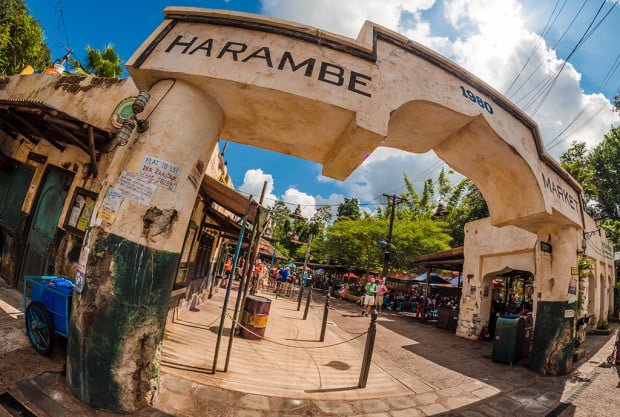 Located in the expanded area of New Harambe at Animal Kingdom, Harambe Market was undoubtedly built to prepare for an influx of crowds once Rivers of Light and Pandora: World of Avatar open. I suspect we will see more ‘supporting players’ dining & shopping options plus ‘release valve’ infrastructure changes like this in the next couple of years.

Like the rest of New Harambe that opened before it, the execution on Harambe Market is spot on. The courtyard is flush with details, many of which are pretty clever. It’s enjoyable to simply poke around to see how the enterprising businesses of the market are trying to advertise and make themselves prosperous. These are the sort of details that I’ve always appreciated about Animal Kingdom.

With that said, there’s a certain “sameness” to the area that makes it feel very similar to the rest of Africa…and Asia. I’ll discuss that as we start the photo tour of Harambe Market… 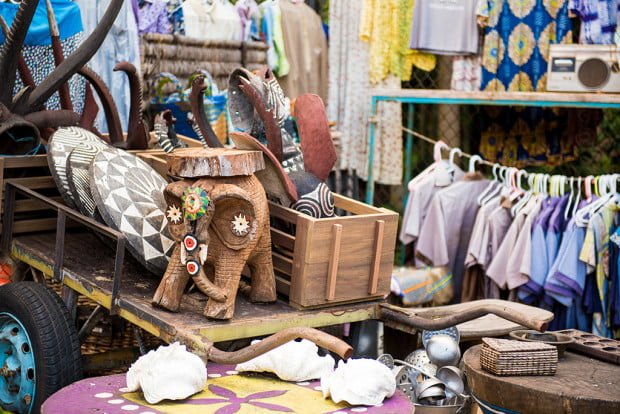 These areas both fixate on the undeveloped areas of those continents, with many of the fictional businesses depicted using low-rent, behind the times means to promote their businesses. (I feel compelled to give a nod to my “I was Wrong About Animal Kingdom” article before offering any criticism of the park, just to show I’m not a typical “Animal Kingdom hater.”) 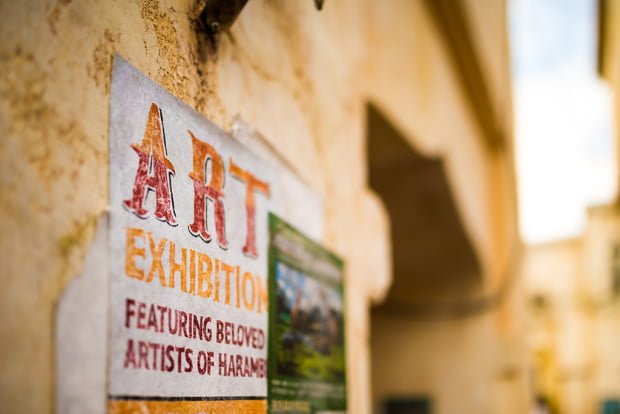 To be sure, there’s a great deal of authenticity in this approach, and there are clear distinctions made between the Africa and Asia lands, but the same general approach in each glosses over disparate and lavish elements of the cultures. 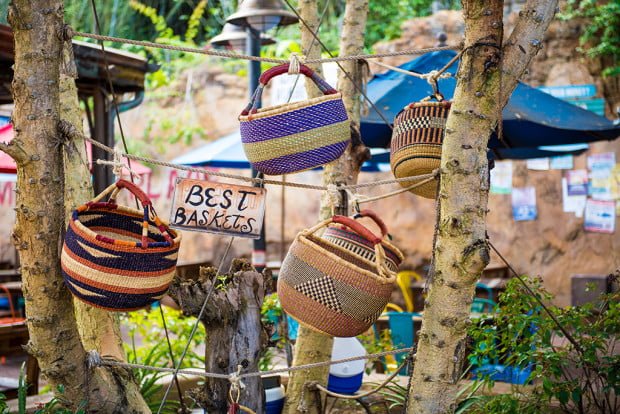 In fairness, I’m not sure there’s any good way to resolve this. If New Harambe deviated substantially from the existing Africa, it would be derided as jarring and incongruous with the rest of the land. 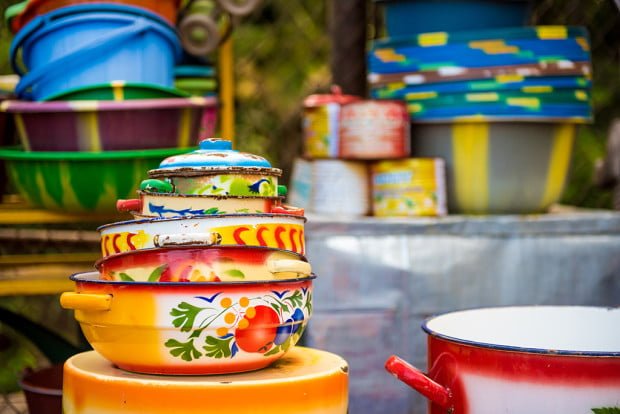 If Asia were built to showcase modern Asia, it would be out of place in the park; if it focused on the opulent culture of the past, it would’ve risked being duplicative of World Showcase. What each of these lands, New Harambe included, present is probably the best case for the park–it’s just interesting to think about things from a “what if” perspective. 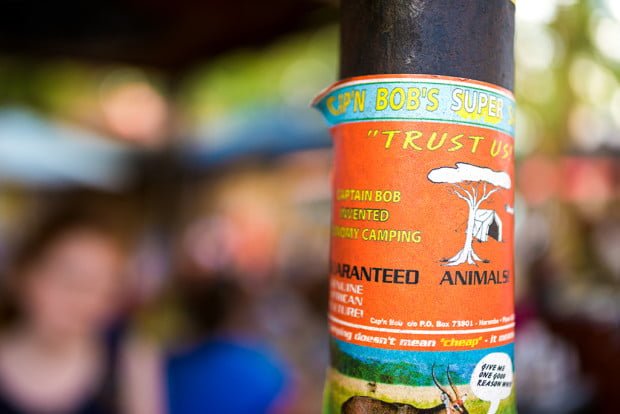 Well, at least for me. Probably not for you if you arrived wanting to read a quick review of food, and don’t care about off topic, holistic rambling about an idealized Animal Kingdom. 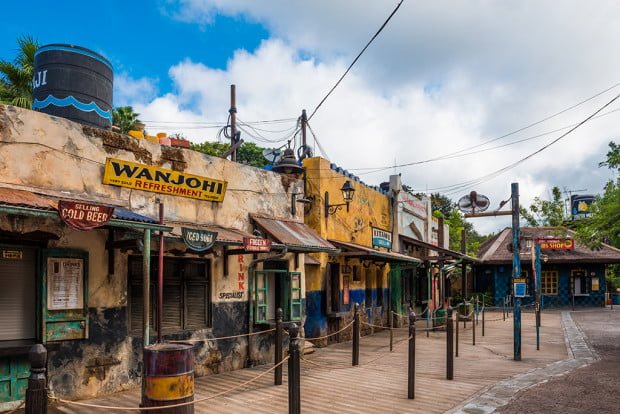 The short version of the above is that, all things considered, the theming at Harambe Market is very well done. Theoretical conceptions aside, my biggest criticism here would be that it’s yet another outdoor “order window” restaurant in a park that already has several of them. This is the case with every* counter service restaurant at Animal Kingdom, and is unfortunate, especially in a park that is, averages** a temperature 13 degrees hotter than the other Walt Disney World parks. 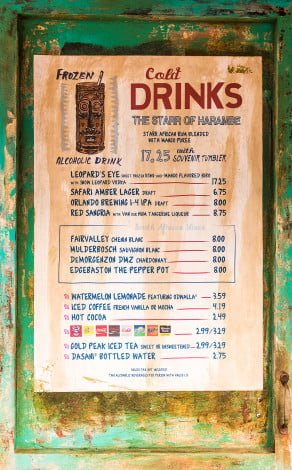 (*Restaurantasaurus and Pizzafari don’t count because they are both disgusting as compared to the excellent Flame Tree BBQ, Yak & Yeti Local Foods Cafe, and now, this.) (**Average temperature based on my personal “feels like” estimate, which is probably about as accurate as any scientific weather “forecast.”) 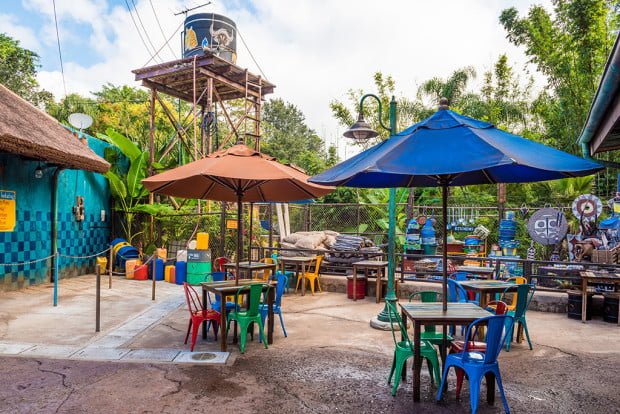 Another logistical criticism is that there’s not enough seating. On both occasions that I dined here, it took forever to find a place to sit, and these were moderately busy weekdays in October. I can only imagine how bad it is during peak season, or once the new attractions debut. 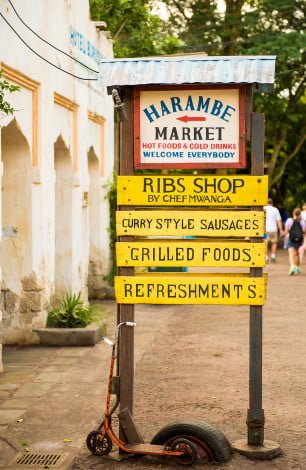 Like Cosmic Ray’s Starlight Cafe, Harambe Market has an ordering bay system. Families will probably sigh at this while those who want a respite from their party will rejoice. I visited Harambe Market twice during our recent Walt Disney World trip, and on both occasions, the lines for the second bay were significantly longer than the other bays. On the second occasion, there was actually a manager out redirecting people to the third bay, indicating anything from those two menus could be ordered from either bay. 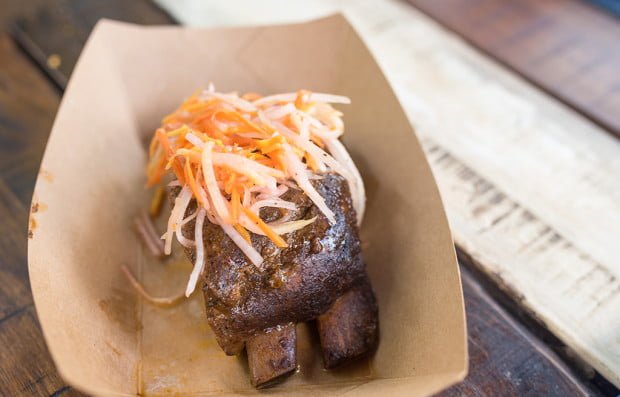 Hang your head in shame, my fellow Americans, as neither time was there any line at the bay dedicated to ribs. Naturally, to rectify this great injustice, I opted for the Spice-rubbed Karubi Ribs–as did both of my friends who joined me for the meal. While there are supposedly “a lot” of spices in the rub, it tasted fairly traditional and not as exotic or adventurous as I expected. The meat itself was tender and moist, almost like a less fatty version of the pork shank at Gaston’s Tavern. 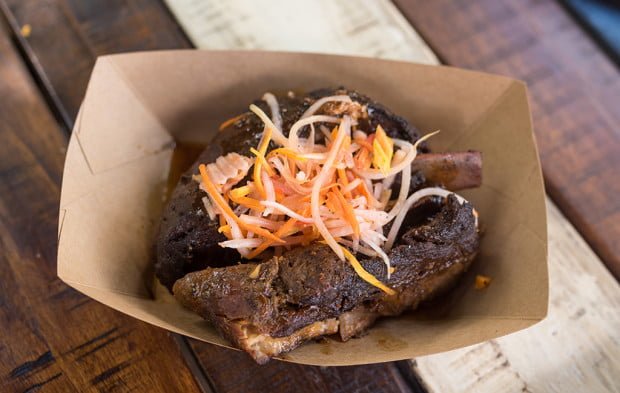 Normally, I wouldn’t complain about discrepancies in portion sizes at Walt Disney World. I get that it happens, and minor deviations are bound to occur. However, in this case, I was on the losing end of receiving an order of ribs that was a little over half the size of what both of my friends received. There shouldn’t be that much of a difference in portion size. Regardless, these are a solid alternative to the ribs at Flame Tree BBQ and will work if your party is filled with communists who don’t appreciate the culinary wonders of that inspirational barbecue joint. 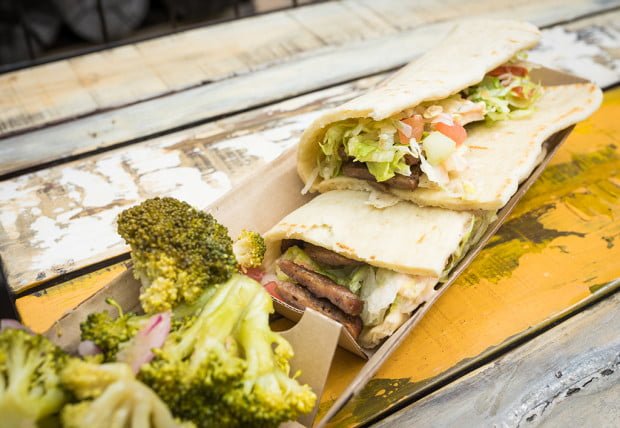 I later returned and decided to brave the lines at the sausage bay for the Ground Beef Kabob Flatbread. The sausage kiosk is the less busy of the two middle bays, and even then, the line was long and moved at a glacial pace. This has much more in common than a gyro than a flatbread.

The beef was thin but flavorful, and the creamy, Tzatziki-ish sauce provided a refreshing contrast to the flavors in the meat. It wasn’t as filling as I was hoping, but still very good. The accompanying veggies (heavy on the broccoli, light on the onions and tomatoes) had an overpowering vinegar taste, that I’d also describe as refreshing (I don’t know many words), but not in a way that works with the “more chill” flavor of the flatbread. 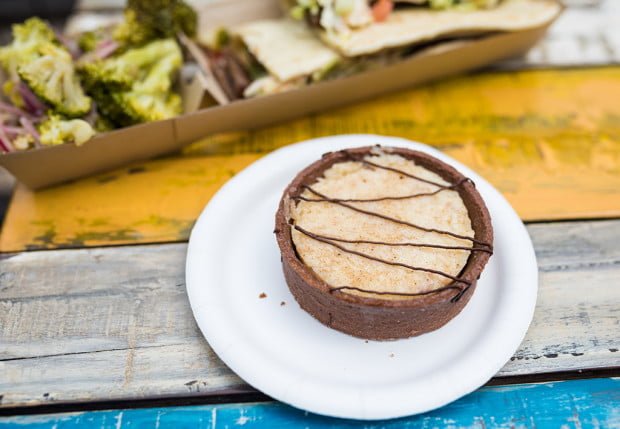 I also ordered the African Milk Tart, which I found to have a wonderful, creamy coconut flavor. Like everything else here, this is nicely spiced, with a light cinnamon and nutmeg flavor to round out the dessert. It felt reasonably complex for a counter service dessert, and I’d definitely order it again. 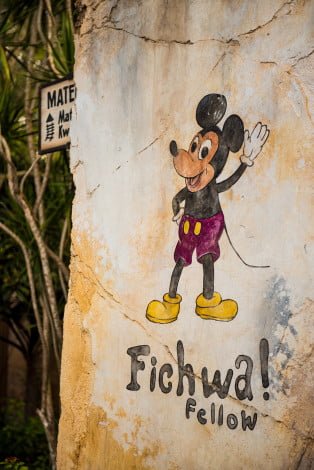 Overall, Harambe Market is a mixed bag. The design touches are well done and make it fit perfectly in Africa, but the guest experience leaves a lot to be desired. I planned on returning for another meal so I wasn’t just reviewing two entrees, but the first two visits were such a hassle that I nixed these plans. It simply takes too long to order and find a table, and this is exacerbated by standing in the Florida sun (which is perfectly themed to the scorching African sun, it seems) while waiting. At least when you deal with this nonsense at Cosmic Ray’s, it’s all in air conditioning, and there’s a Cast Member “gatekeeper” preventing table-saving during peak hours. This is all very unfortunate because the food at Harambe Market is good (and is the basis for a strong score here–which would be lower if we didn’t weight heavily for theme and food), but it’s a spot I’ll be skipping in the future unless I happen to wander past when lines and tables are both empty. Ain’t nobody got time for that when you can feast upon perfectly barbecued meats over at Flame Tree. 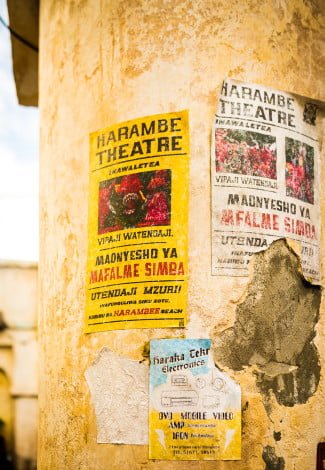 If you have dined at Harambe Market at Disney’s Animal Kingdom? Did you think it was a hassle to order and get a table? Do you agree or disagree with my assessment of the food? Share your thoughts in the comments!