The Headless Horseman rides at the beginning of the Boo to You Parade during Mickey’s Not So Scary Halloween Party. Since the parade starts in Frontierland and Main Street USA (the best place to view the parade) is at the end of the route, and because the horseman moves considerably faster than the rest of the parade, if you’re on Main Street, you’re going to be waiting about 20 minutes for the rest of the parade after the Headless Horseman passes.

The Headless Horseman’s horse was “new” last year, and because of that, he moved a tad slower last year than he did in previous years. This was great for photographers, but it by no means made photographing him easy. This is still the most difficult part of the parade to photograph. Because of this difficulty and because we were standing in the perfect spot to capture a wide view of the whole scene, I decided to do exactly that. I wish I had a frame of the horse much closer to us, but of course none of those photos turned out. There’s the vague possibility that there was some user error involved in taking the photos, but I think the real cause is gremlins.

Speaking of gremlins (lamest transition ever), I watched Gremlins 2: The New Batch yesterday for the first time, and I feel compelled to offer my review of the film. It’s only some 22 years after the film’s release, so I feel it’s fairly timely…

Let me start out by saying that I’m a huge fan of the original Gremlins. I have an interesting (well, not to you) history with Gremlins, as the movie frightened me as a small child and gave me nightmares, yet I sought to watch it with my parents each year to prove that I had become more brave since the last time we watched it…despite it continuing to give me nightmares. For some reason (likely to torture me), my dad bought this Stripe plush from a garage sale and brought it home to me one day. I was so scared of the plush that my dad ended up nailing it to the gate of our tow trailer so it couldn’t attack me…or something like that. Instead, it “only” followed us around wherever we drove with the trailer. Brilliant move, dad.

What does all of this have to do with my review of Gremlins 2? Nothing–but then again, what does a review of Gremlins 2 have to do with a photo of the Headless Horseman? It just establishes that my history with Gremlins is a long one, and yet somehow I’ve never watched Gremlins 2. The reason for this is because as an adult I’ve grown to appreciate the brilliance of the original Gremlins (which admittedly still scares me a bit) and I didn’t want to taint that with what I assumed was a cash grab sequel.

After watching Gremlins 2, I can state with complete confidence that it was green lit with the intent of being a cash grab sequel. However, director Joe Dante had his own plans.

You know Gremlins 2 is going to be something different right from the outset, when a seemingly random Looney Tunes cartoon involving some confrontation opens the movie. From there, we’re transported to present day New York City, where the main characters from the original work in a large tower owned by Daniel Clamp, an egotistical billionaire who is clearly an amalgam of Ted Turner and Donald Trump. There’s some biting satire and parody here before the Gremlins appear, and it frankly caught me off guard. Was this movie not a lame cash grab but instead a film with a message? Were the Gremlins in New York a metaphor? Was this film a precursor to more recent anti-corporate activism movements, like Occupy Wall Street?!

No, Gremlins 2 is none of those things. Once the Gremlins appear, the movie shifts from satirical to lighthearted parody, poking fun at everything from other movies of the era to bio genetics to sequels in general. There’s also a significant amount of self-aware parody, as the film pokes fun at itself and the original Gremlins with different gags and instances of breaking the fourth wall, all to varying degrees of success. It could be said that once the Gremlins arrive, the whole thing is an exercise in self-parody, as the antics of the Gremlins become more and more absurd and wholly inconsistent with their behavior in the first film. Initially, I was disappointed by this, hoping that the movie I expected to be a brainless sequel might somehow become a deeper movie. In hindsight, I think it’s definitely a good thing that the movie stayed light and didn’t get preachy, as that might have been a bit much for a summer blockbuster featuring the Gremlins. 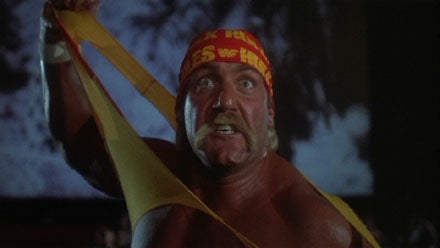 Yep, Hulk Hogan makes an appearance as himself.

The execution of this all is a bit of a mixed bag, but one I enjoyed a great deal. There really is no story; the Gremlins just bounce from situation to situation carrying out their zany antics (the movie is in no way dark like the original–zany truly is the best way to describe it) and setting up various in-jokes. In that regard, I suppose some might view the movie as a bit disappointing, as the movie feels disjointed. It seems almost as if there were some competing interests when the script was written, and none of the things Gremlins 2 could have been (satire, fully developed story-driven sequel to Gremlins, or simple mindless sequel) are fully developed. However, in its own way, this disjointedness actually works. It adds to the anarchic tone of the film, first established by the Looney Tunes, embodied by the Gremlins’ antics, and solidified by the final absurdly brilliant lines by Clamp as the movie ends.

I am already planning another viewing of Gremlins 2, this time with the commentary on. I want to know how this movie got made the way it did, because it just doesn’t make sense that Warner Brothers would agree to make this film. My best guess is that they wanted to make a sequel so badly to cash in on the popularity of the Gremlins that they told Dante they didn’t care about the script, so long as the movie had “Gremlins” in the title and included the highly merchandise-able Gizmo. Dante and his team had a field day with the latitude they were given. At least, this is my bet (there really is no other explanation short of actually believing that real-life Gremlins switched out the real film for this one prior to the movie’s release).

However it got made, the world is a better place because of its existence. It certainly isn’t a film that will appeal to everyone (I suspect it’s one of those “love it or hate it” type movies), but it’s worth giving a chance. If you don’t find yourself shedding a tear during the brilliant “New York, New York” song and dance number, well…I’m not quite sure you have a heart! 😉

Technical details (of the photo…the original point of this post): shot with a Nikon D600 with a Nikon 14-24mm f/2.8 Lens. See our guide for more photography equipment recommendations.

Check out over 1,000 of my best Disney photos in my Disney Photo Gallery!