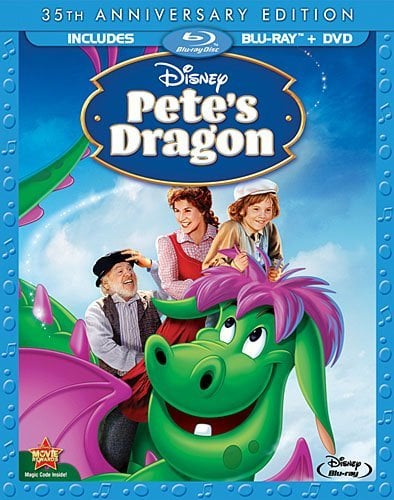 Pete’s Dragon was just released on Blu-ray, and many people are likely to purchase the Blu-ray due to childhood nostalgia for the film. Before doing so, if you’re one of these people, I’d strongly recommend you to rent it first and give it another viewing. It’s not as good as your memory may recollect. In fact, Pete’s Dragon is not good at all. It’s downright bad.

Before you assume that maybe our tastes simply differ, let me be clear: Pete’s Dragon is bad for a variety of reasons, at least one of which is likely to ring true for you: 1) too many and too frequent contrived songs that are entirely out of character for those singing the songs; 2) said songs kill the pacing of the film; 3) a variety of “cheap animation tricks” that are overused to show off the not-at-all-groundbreaking use of live action plus animation; 4) over-use of the “my dragon is invisible” bit; 5) a story that is way too long and uninspired; and, 6) terrible acting all around, with the exception of Elliot, and that’s only because he never talks.

Elliot is about the only redeeming quality of the film, and even he is not all that impressive. Sure, he’s cute, but you’re far better off looking at a screenshot of the film than watching the movie to ‘absorb’ that cuteness. Actually, about the only redeeming things about Pete’s Dragon are the look of Elliot, the copious alcohol consumption oddly glamorized in the movie, and the fact that the coolest Main Street Electrical Parade float exists because of this movie.

If for some reason you still want to buy this Blu-ray, fear not, as the audio and video quality do not disappoint. Video quality is pretty solid, with the exception of scenes featuring Eliot, which are often muddled, grainy, or poorly colored. This could be a result of the animation itself, but it seems like something could have been done to clean it up.

Audio is similarly good, but nothing overly impressive. It does its job without overpowering or sounding uneven.

Pete’s Dragon has about 35 minutes of extras, 25 minutes of which are a special effects “movie magic” documentary focusing on how Disney made Pete’s Dragon. None of the others are noteworthy. I didn’t watch any of these special features, as having to watch the movie itself was torture-enough.

In closing, don’t buy Pete’s Dragon, even if you want to–rent it first instead. If you’re on the fence about Pete’s Dragon, stay far, far away. Even if you have kids, don’t buy it (unless they live in the 1970s or 80s and are likely to be impressed with this sort of thing.) Save your money and watch this video of cats meowing instead. It’s better, shorter, and free!