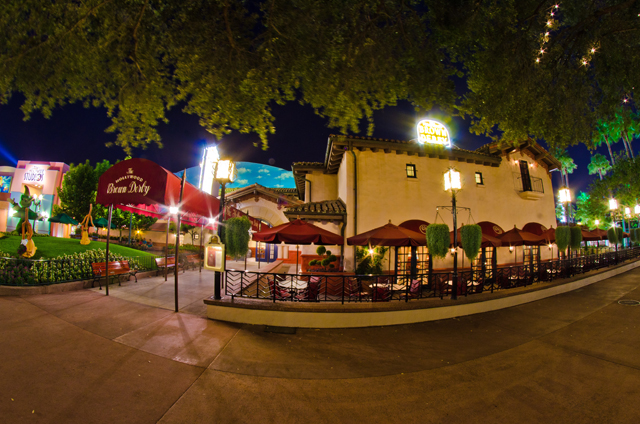 The original is a longstanding Hollywood landmark and iconic restaurant that served Tinseltown’s celebrities during the Golden Age. The Hollywood Brown Derby is one of the absolute best restaurants located in a Disney theme park, and the ambiance cannot be beat. However, it’s also one of the more expensive restaurants in a Walt Disney World park.

Is it worth the money? Let’s take a look… 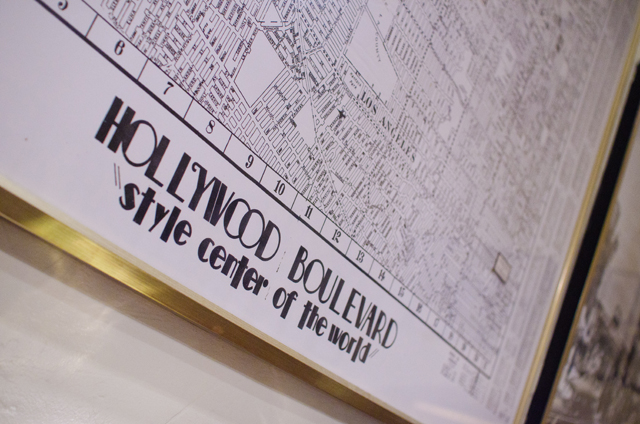 Located in the “style center of the world” the Brown Derby sets the tone for the experience as soon as you step in the entrance. This is like stepping into a time machine and revisiting the golden age of Hollywood. 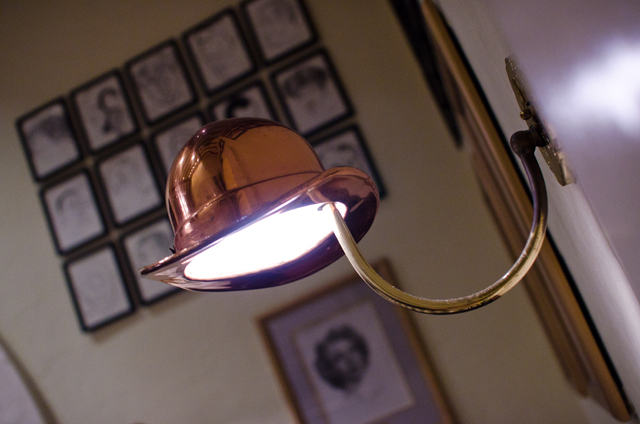 Much like the original Brown Derby, the Disney’s Hollywood Studios’ recreation features restaurant walls adorned with black and white caricatures of famous faces. 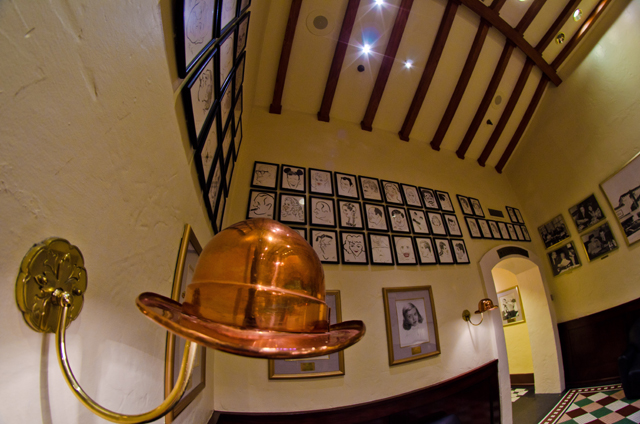 The ambiance at the Brown Derby is truly unlike any other restaurant in Walt Disney World, as it’s what I’d describe as beautifully themed elegance. 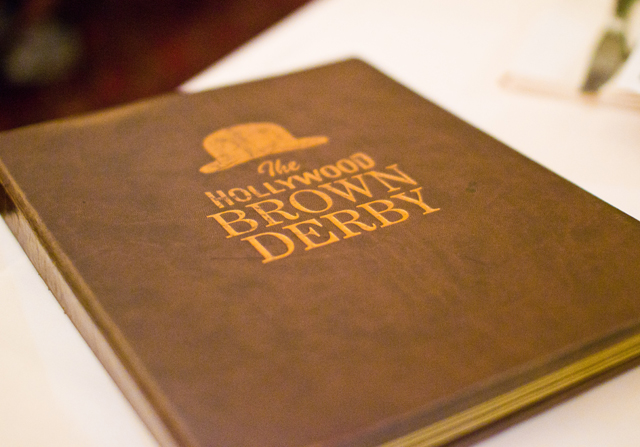 Most Disney restaurants do theming OR elegance well, but few excel at both. The Hollywood Brown Derby excels at both. 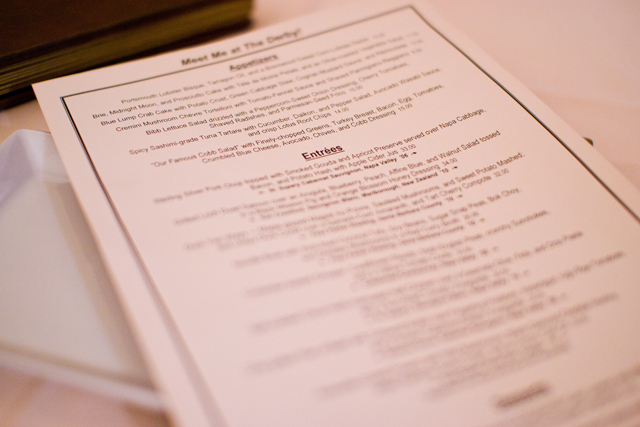 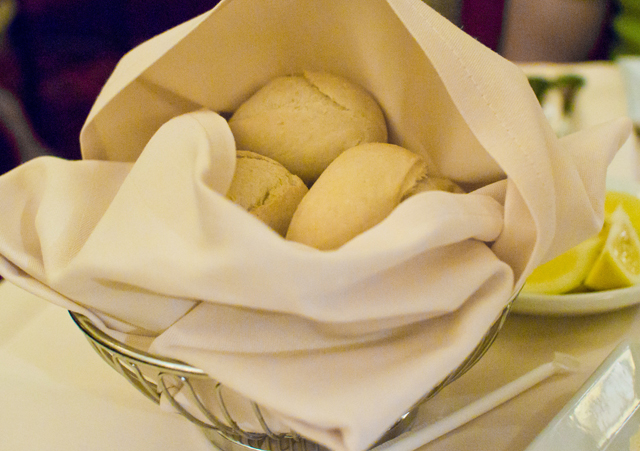 The famous Brown Derby Cobb salad follows the “recipe” created by Bob Cobb, owner of the original Brown Derby, when he was raiding the fridge late one night to prepare a dish for a celebrity. Another Brown Derby original is the light grapefruit cake with cream cheese icing. Both of these items are must-tries when you’re visiting The Hollywood Brown Derby in Disney’s Hollywood Studios. 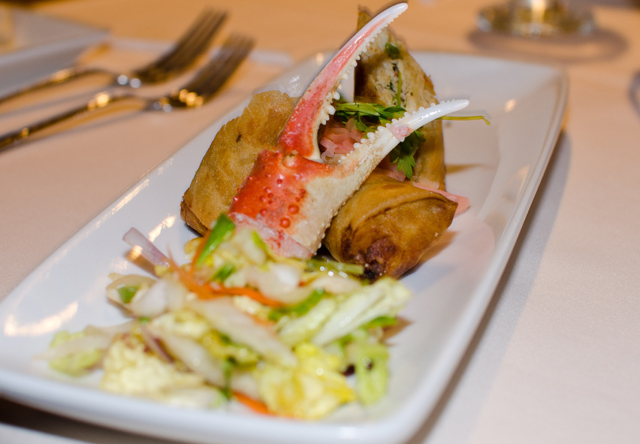 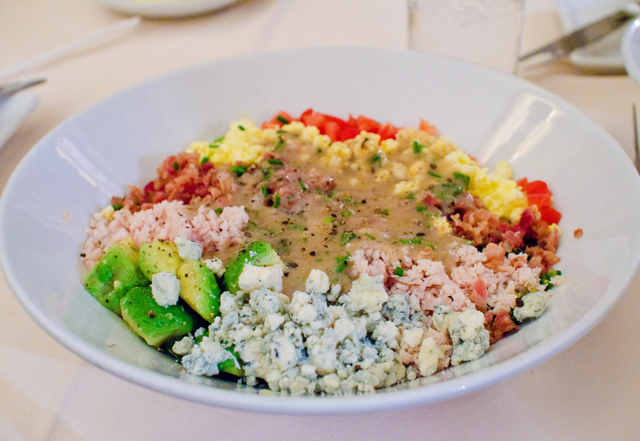 For those unfamiliar, the Cobb Salad contains finely chopped greens, turkey breast, egg, bacon, tomatoes, crumbled bleu cheese, avocado, chives and Cobb dressing and is priced at $15. $15 may seem like a lot for a side-salad, but this is no ordinary side salad. This was the most amazing salad any of us have ever consumed, and was basically a meal-in-itself. Sarah couldn’t even finish hers. 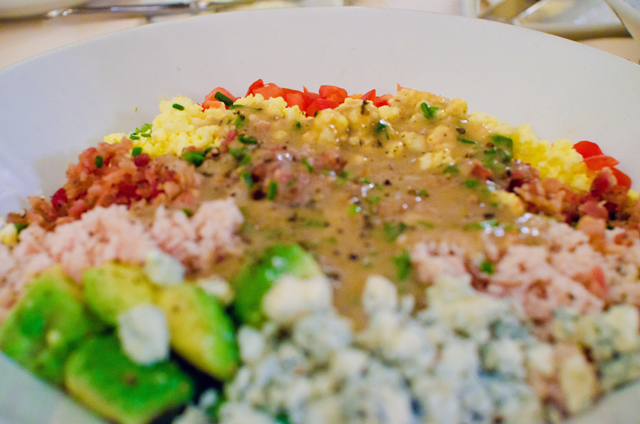 The finely chopped greens, as opposed to iceberg lettuce or even mixed greens, made a substantial difference in taste. On top of that, the kitchen-sink of ingredients, including a healthy dose of turkey, bacon, eggs, and avocado really put it over the top. 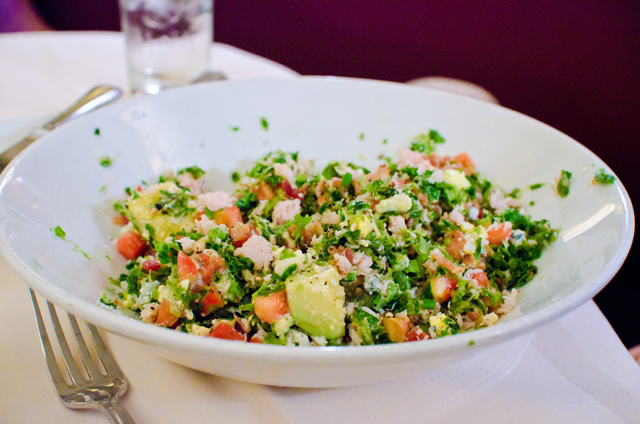 If you want to dine at the Brown Derby to enjoy the ambiance and aren’t that hungry, consider ordering just this salad and a grapefruit cake. As an appetizer, this salad is too much for one person. As an entree, it’s about the perfect size for one person. 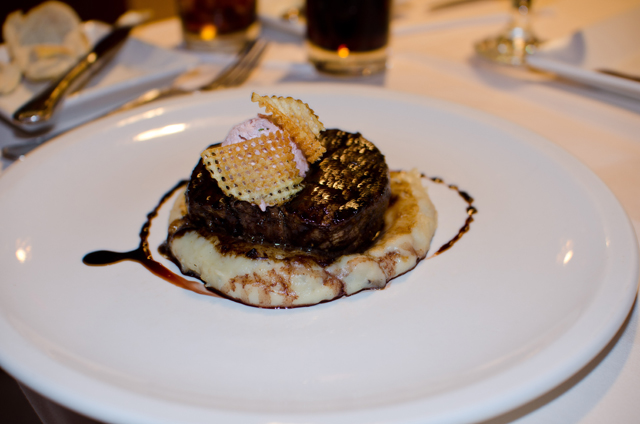 The one thing that the filet offers that I cannot resist is the White Truffle Forest Mushroom Whipped Potatoes. I love mashed potatoes, mushrooms, and anything “truffle.” These were probably the best mashed potatoes I’ve ever tasted, and when Sarah let me taste hers, I attempted to eat them all (mission: failed). Next time, I’ll likely order a side of these potatoes to accompany whatever I order. They were really that excellent. 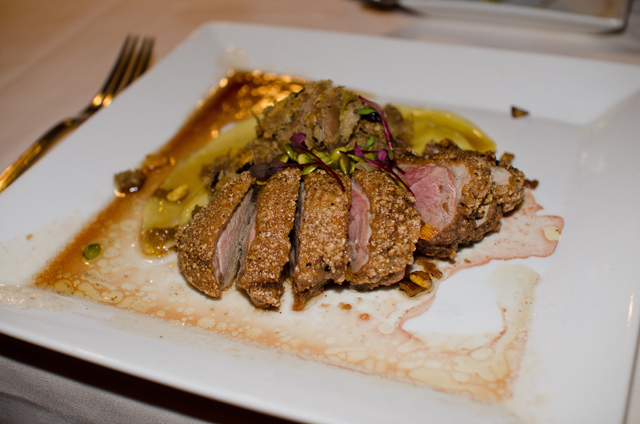 For a main entree, you really can’t go wrong with anything (at least that we’ve tried) on the Brown Derby’s menu. Some items change seasonally. My current favorite is the Duck Two Ways. It is tender and flavorful with a hint of maple and a perfect confit wrap that really adds to the taste. 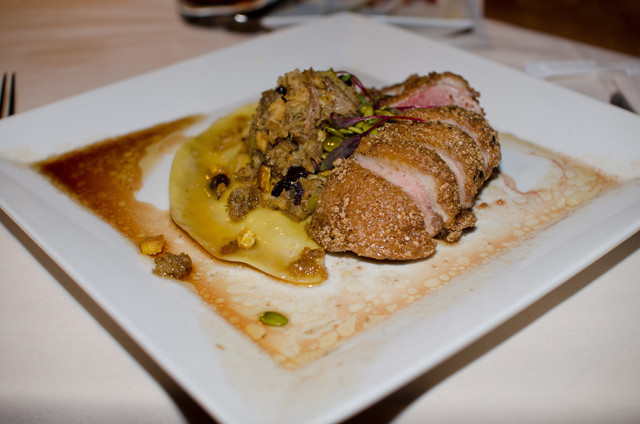 I actually preferred this to the Filet of Beef that Sarah ordered, which was also exceptional, tender, and well flavored, by just a bit. It’s rare for me to prefer duck to a filet, so I consider this to be high praise. 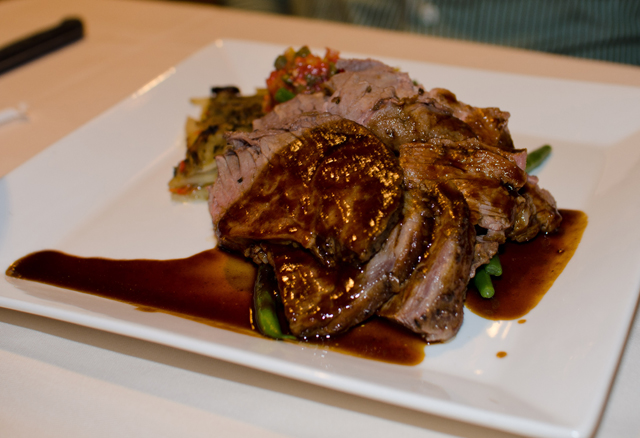 Another excellent choice for an entree is the Spit-roasted Leg of Lamb with Lyonnaise Potatoes, Garlic Haricot Verts, and a Red Zinfandel Sauce. Again, incredibly tender with a really complex and exquisite flavor thanks to the sauce. The potatoes here are also good.

Although we have yet to try every item on the menu, we have salivated when other entrees have passed our tables on their way elsewhere. I’d be surprised if there is a bad entree at the Brown Derby. This is one in park restaurant that truly lives up to its “signature” status. 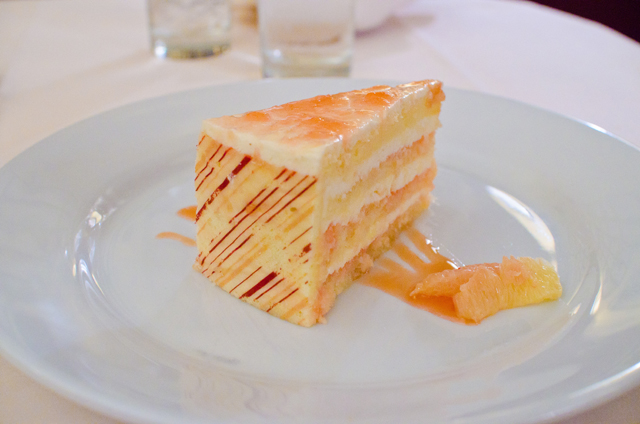 We’ve tried several desserts at the Brown Derby, and surprisingly, the signature Grapefruit Cake was actually my least favorite. It is the most unique, and I encourage everyone to give it a try to see if it appeals to them more than it appealed to me, but I don’t think it was anything overly impressive. 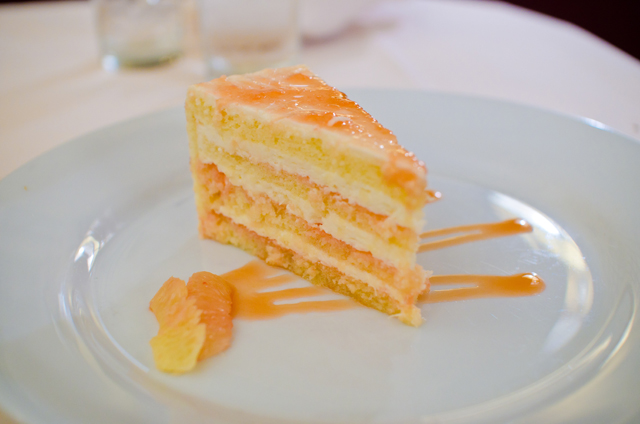 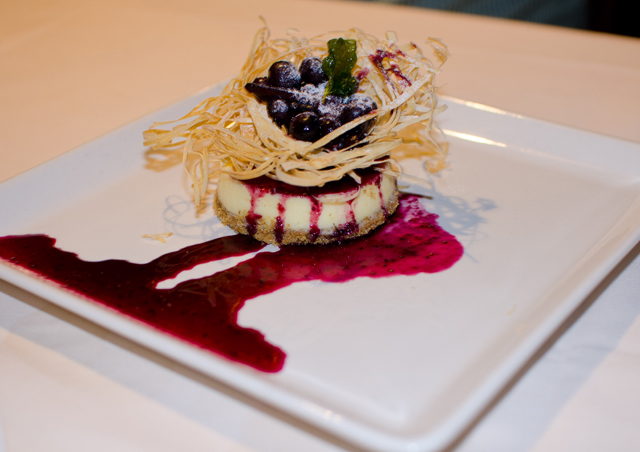 Sarah liked the Citrus Honey Nest filled with Candied Ginger Blueberries over a Lemon Cheesecake, but I found that the blueberry and lemon flavors did not compliment one another well. 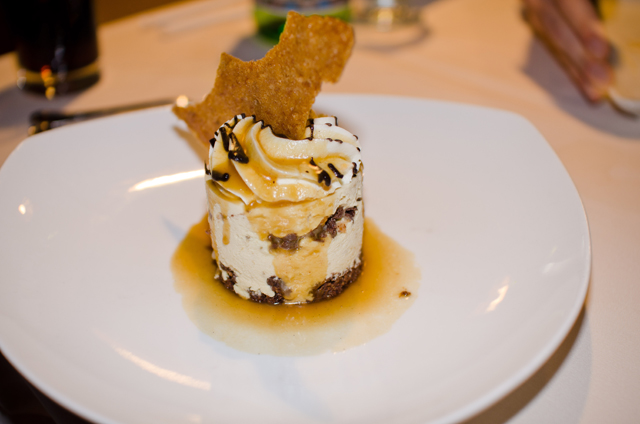 The Hollywood Brown Derby also offers an extensive wine list with wines by bottle or wines by the glass. The standard (subpar) selection of beer is also available here, and classic cocktails are poured table-side. We have yet to sample the wine or cocktails at the Brown Derby, but the cocktails look excellent. 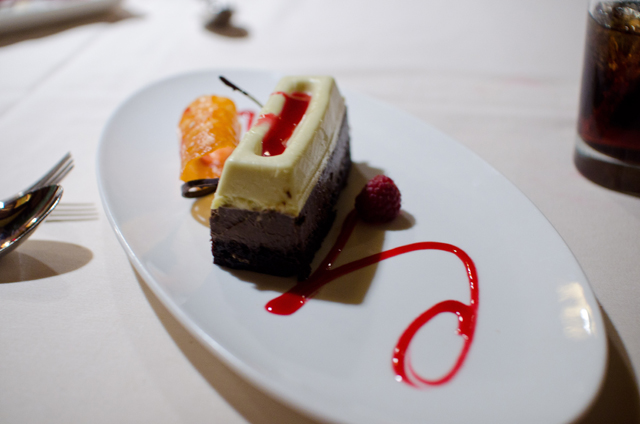 Also available at the Brown Derby is the Fantasmic! Dining Package, which offers guests designated seating during the Fantasmic! nighttime show at Disney’s Hollywood Studios. 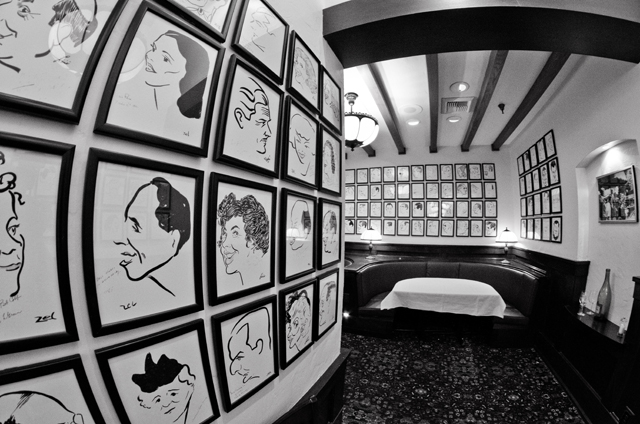 In addition to that, guests may participate in the “Dine with an Imagineer” experience, which offers a 4-course meal, with a Disney Imagineer. We’ve never done either of these things, but wanted to let you know they’re out there. 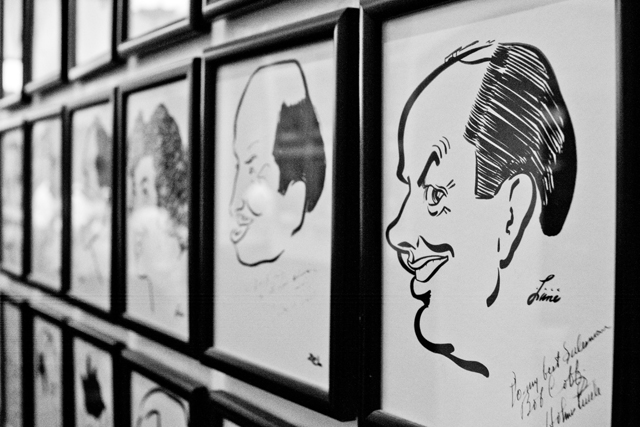 Do you agree that Hollywood Brown Derby is the best in-park Signature Restaurant? What are your favorite dishes there? Share your thoughts in the comments.