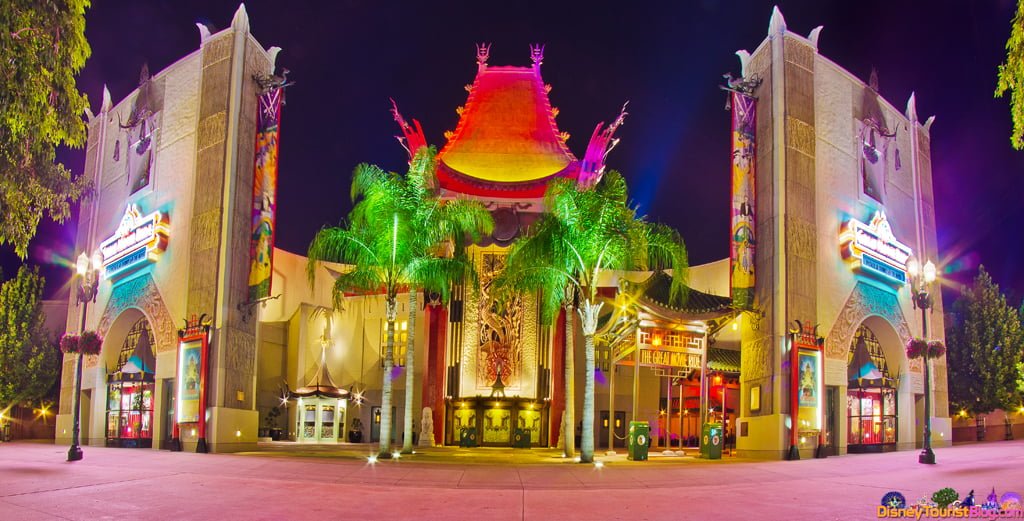 Note: This post was originally published two years ago as an editorial concerning why the Sorcerer’s Hat should be removed as part of the rumored overhaul of Disney’s Hollywood Studios. Two years later, that overhaul still remains a strong rumor, but there has been confirmation that the Sorcerer’s Hat finally will be removed in early 2015. Removal of the Sorcerer’s Hat began on January 7, 2015 and will occur in phases through the spring. We thought it appropriate to republish this post. It’s as timely now as it was in 2012.

With a lot of rumors that Disney’s Hollywood Studios is set for a massive overhaul and expansion presently floating around, I thought it would be a good time to weigh in. No, not on the substance of what will be added specifically. I don’t pretend to have any “insider” information, although I am hopeful that Kathy Mangum’s relocation to Florida means something other than Cars Land coming to Florida (my preference would be for it to remain exclusive to Disney California Adventure so that park can have its own unique draw).

For years, Grauman’s Chinese Theatre had acted as a thematically appropriate “weenie” at the intersection of Hollywood and Sunset Boulevards (not necessarily the park’s main icon–by most accounts Earful Tower was meant to be that) drawing guests down Hollywood Boulevard, which was themed, unsurprisingly, to various design styles of old Hollywood. Grauman’s itself similarly represented old Hollywood, being a re-creation of one of the most iconic theaters in Hollywood.

It similarly fit the theme of Sunset Boulevard and transitioned nicely into the surrounding area. While the architecture down the Boulevards might seem like a random mish-mash, it is far from that. In fact, close inspection reveals that the Imagineers went to painstaking lengths to model the buildings after period locations in Hollywood. All of these buildings are representative of an idealized old Hollywood (“the Hollywood that never was and will always be”), and create a clear visual motif and theme to this portion of the park. 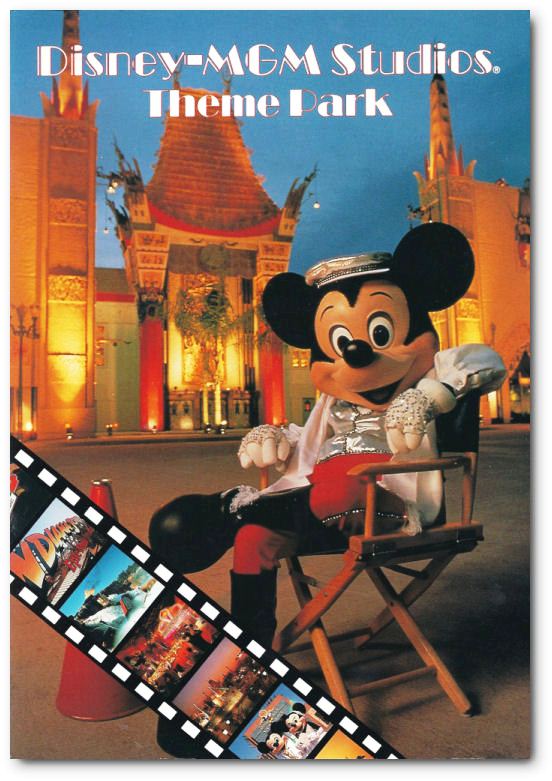 One of many promotional pieces sold and given away to guests at the Disney-MGM Studios. Scan courtesy of George Taylor, Imaginerding.com

Over a decade after the park opened, the decision was made to interrupt this old Hollywood theme by adding a giant, 122-foot tall Mickey Mouse Sorcerer Hat into the middle of this area. This Hat would be added in 2001, while the park was still known as the Disney-MGM Studios. There are plenty of urban legends floating around as to why this occurred, including that Disney built the Hat because it could not use the Chinese Theater on promotional materials or station PhotoPass photographers near Grauman’s due to intellectual property rights. All of these purported reasons that the Hat was built are grounded squarely in myth.

While few are privy to the internal conversations that occurred with regard to the building of the hat, here’s Disney’s official statement on the Sorcerer Hat: “The Sorcerer Mickey Hat truly represents the magic of show business and the entertainment wizardry of Disney. This imaginative icon falls in line with the tradition of Cinderella Castle at Magic Kingdom, Spaceship Earth at Epcot and the Tree of Life at Disney’s Animal Kingdom.” 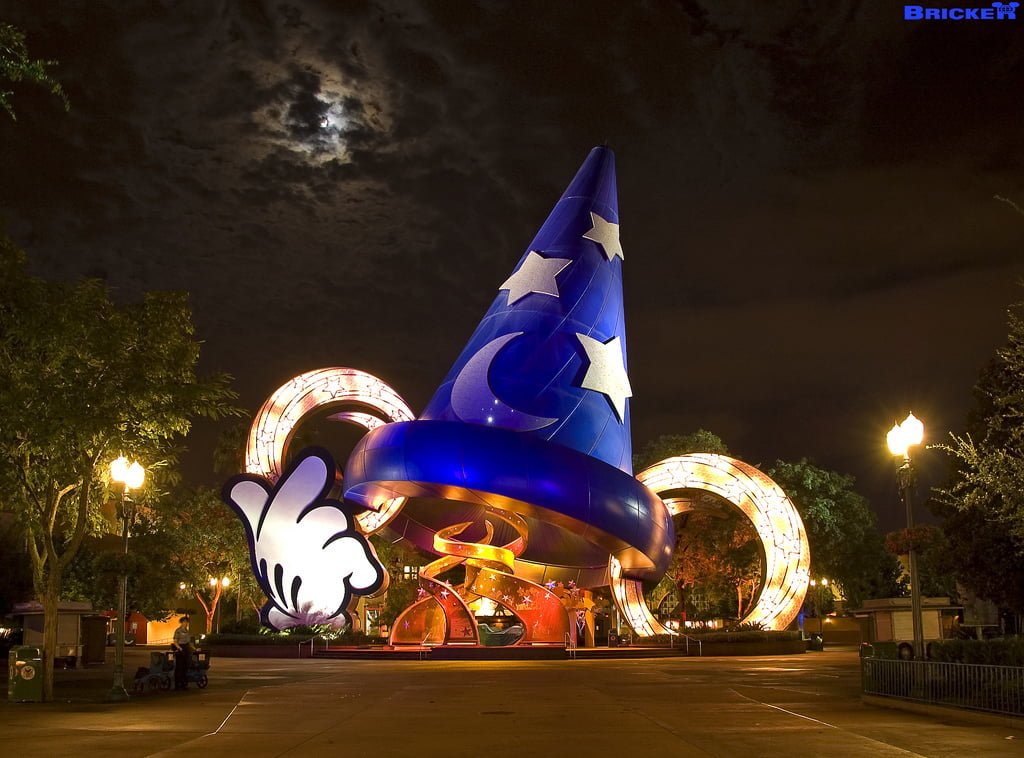 If you can gag your way past that chocolate-coated PR fluff, the offered justification there actually makes a good deal of sense. The rationale for placing the Sorcerer Hat in its present location is to establish an identifiably “Disney” icon for Walt Disney World’s “studios” park near the front of the park, much like the other distinctive “Disney” icons the other three parks have. The Chinese Theater, like most of the rest of the Studios’ entrance area, was a re-creation of an actual Hollywood landmark that Disney did not own or control. It was not distinctly Disney. With some visitors to Walt Disney World regularly making remarks in the vein that they’re “going to Disney World and Epcot” when they mean that they’re going to the Magic Kingdom and Epcot, both of which are in Walt Disney World, there was likely some guest confusion as to which of the two “studios” parks in Orlando was owned by Disney. This probably was not helped by a non-Disney icon sitting at the front of the Disney-MGM Studios for over 10 years. 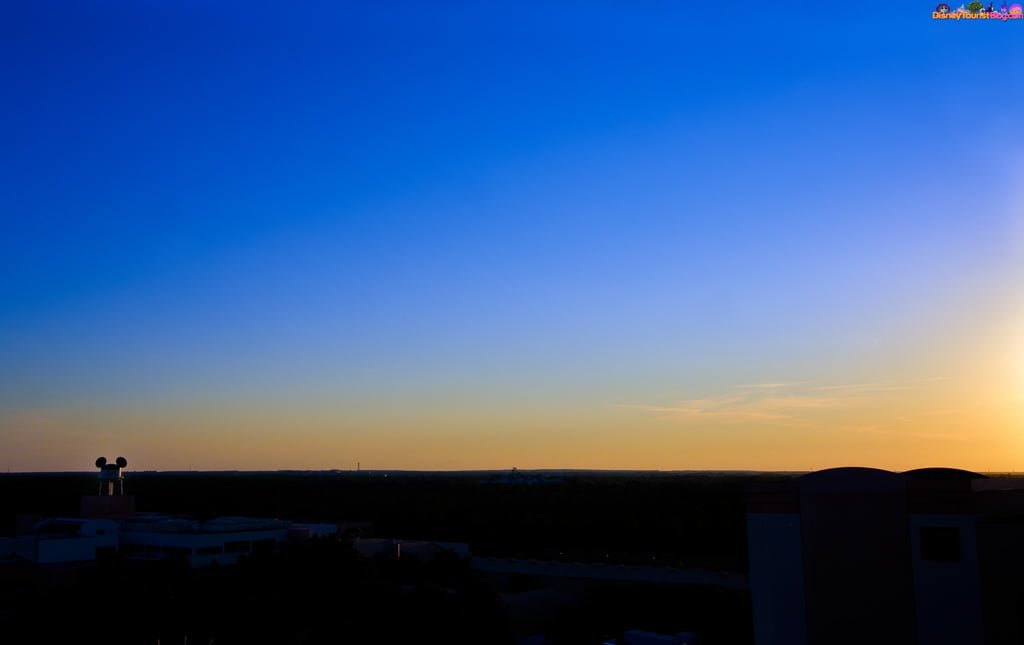 Granted, the Studios had the distinctly-Disney Earful Tower as its “true” icon for those 10 years plus years, but the Earful Tower is not as prominent as any other park’s icon. In their respective parks, all other icons are located, more or less, where the Chinese Theater sat at the Studios. Within the park, it was the most prominent and centrally-located structure, and became a de facto park icon, even if that was not the original intent.

I suspect that plans to add a “Disney” icon to the intersection of Hollywood and Sunset Boulevards at the Disney-MGM Studios was not made by the creatives at Walt Disney Imagineering, but by executives focused on increasing the Disney branding in the park. The creatives were likely ultimately tasked with designing an icon, but I cannot fathom that the idea would have originated with them. The creatives who so meticulously worked to create an authentic old Hollywood theme and feel throughout Hollywood and Sunset Boulevards would not have taken the affirmative initiative to undo that theming such a short time later. This is corroborated by the fact that high-ranking Imagineers have been openly critical of the Big Sorcerer Hat when speaking publicly. 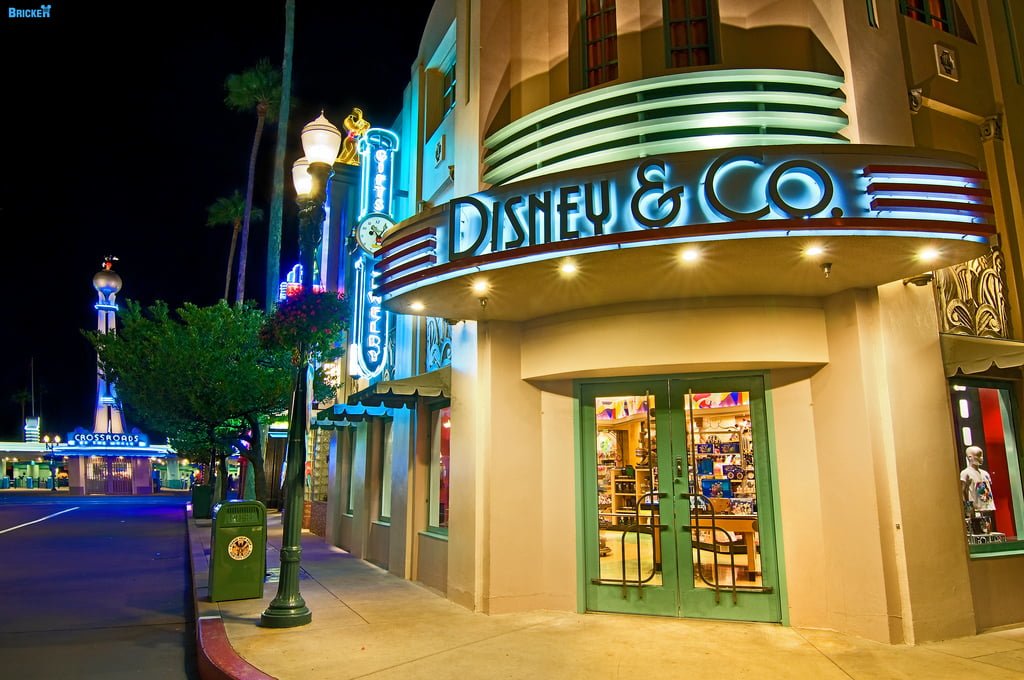 The Hat makes this area artistically and thematically disjointed. While various architectural styles work well in close proximity to one another on the intersecting boulevards, they work because they re-create the look and feel of Hollywood. Hollywood is a place of big egos, and that comes across even in the architecture as conflicting styles all compete for attention in the real Hollywood. The differing styles give character and intrigue to the real Hollywood, and these styles were well-replicated in the Disney-MGM Studios. In other words, the design of Sunset and Hollywood Boulevards worked because the design was authentic. It had design that hearkened to Hollywood, and the way the Imagineers managed to make the architecture flow with buildings in closer proximity to one another was nothing short of masterful. 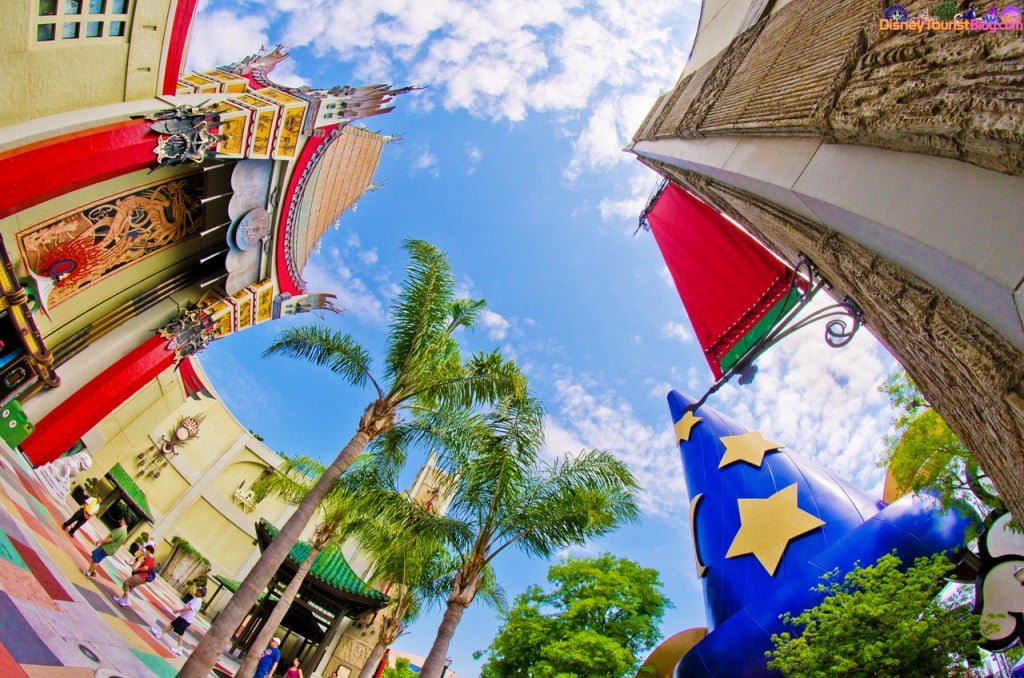 By contrast, the addition of the hat was clumsy, off-theme, and without regard for thematic continuity. It had all the makings of a calculated corporate decision, disregarding the art of the theme park. Its existence seemed predicated in fuzzy ex post facto logic (“We want a Mickey Mouse hat to serve as the icon here, let’s find a way to explain away any thematic issues.”), shoe-horned in with a nonsensical explanation as to why it fits. Big Sorcerer Hat=Mickey Mouse=Animation=Hollywood=Perfect Fit! Not quite. 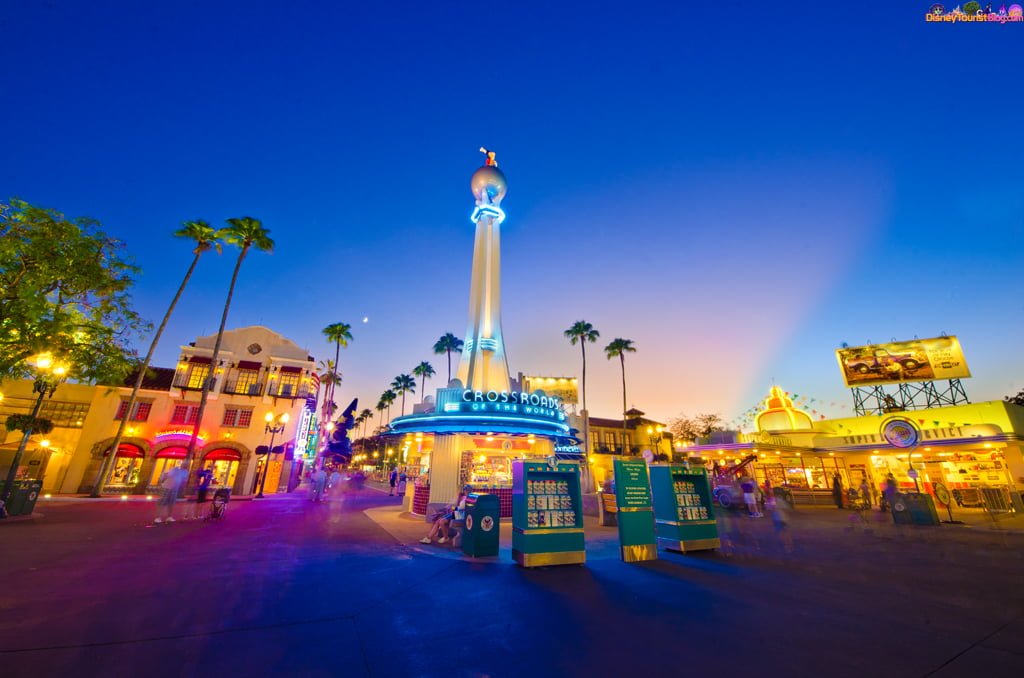 Much like how a giant polar bear statue wouldn’t work in the middle of Africa at the Animal Kingdom, the Hat doesn’t work where it’s located in the Studios. Although polar bears are animals, they aren’t animals that have much of a connection to Africa and a statue of any animal, let alone a polar bear, wouldn’t jive with the rest of the authentic architecture in Africa. The other park icons work because they fit the themes of their respective locations. Even though Cinderella Castle is visible from Main Street, USA, Main Street proper terminates well before the Castle, which serves as a very fitting entrance to Fantasyland. The Sorcerer Hat could have worked as a gateway to the Animation section of the park, but not in the middle of old Hollywood architecture.

I know the Sorcerer Hat has plenty of fans and is fairly popular with some guests. I’m not contending that it’s an eyesore in general, my contention (as stated at the beginning of the article) is that it is thematically inappropriate in its present location. I wouldn’t mind seeing it relocated, although I don’t think that’s really possible in the real world (this isn’t Theme Park Tycoon where you can uproot and simply move large structures–the Hat would need to be deconstructed and reconstructed). That said, I think most people who think it should stay either haven’t given serious thought to why it’s thematically inappropriate in this location, or simply don’t care about the art of theme parks. Anyone who is a true fan of Disney theme parks, I think, should care about the art of Disney theme parks. This art and meticulous attention to detail are what separates the Disney theme parks from other theme parks and amusement parks, and I think it’s a grave error to be accepting of something that harms that art for the selfish and superficial reason that something “looks cool.” 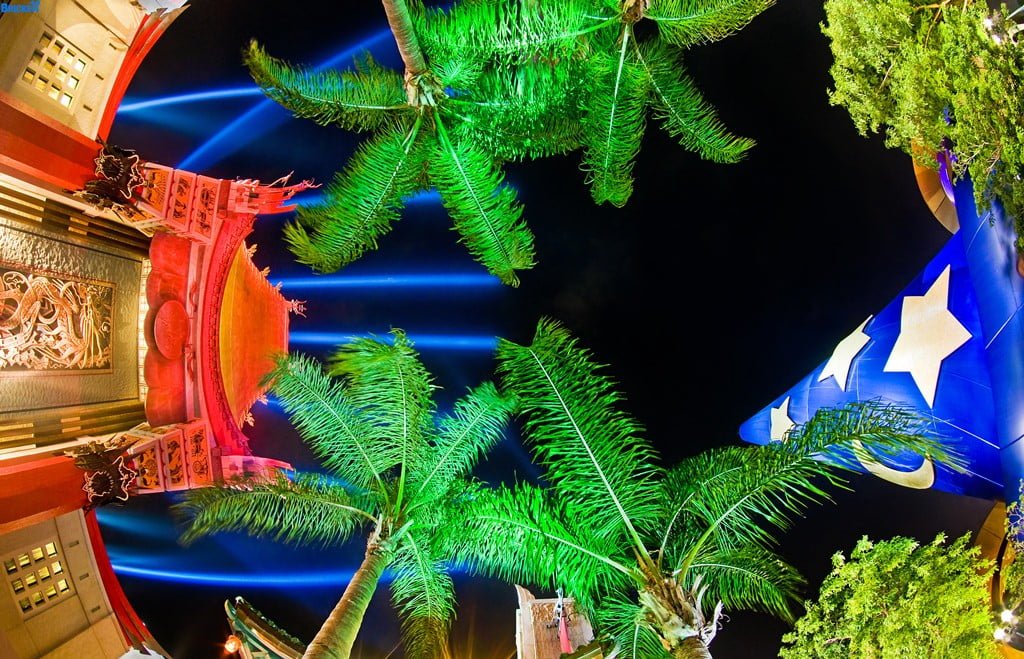 For this reason, and despite my admitted belief that the Sorcerer Hat does look somewhat cool and is fun to photograph, I think any Disney’s Hollywood Studios expansion or overhaul needs to include a removal of the Big Sorcerer Hat. To be sure, this may reintroduce the “issue” of Disney’s Hollywood Studios not having a distinct Disney icon that is readily identifiable to most guests. Disney can either address this by retooling the facade of the Great Movie Ride or just shrug it off. My strong advice would be to shrug it off.

So what if the park doesn’t have an icon on par with the other three parks? So what if some guests are confused as to whether it’s a Disney theme park? (The name should be a dead giveaway!) As most readers of this blog realize, there will always be a good chunk of guests who are confused by even the most obvious aspects of the parks (“What time is the 3 o’clock parade?” “How much do FlashPasses cost?” etc.). Appealing to the lowest common denominator is dangerous and ill-advised. The Studios still have the Earful Tower, and could always make this icon more prominent (or present in marketing) if something “distinctly Disney” is desire for whatever purpose. Disney has demonstrated that it’s willing to use a non-Disney icon as its center-piece with Carthay Circle Theater in Disney California Adventure, and I hope this trend is continued in Florida by restoring the Chinese Theater to a prominent position at the intersection of Hollywood and Sunset Boulevards. 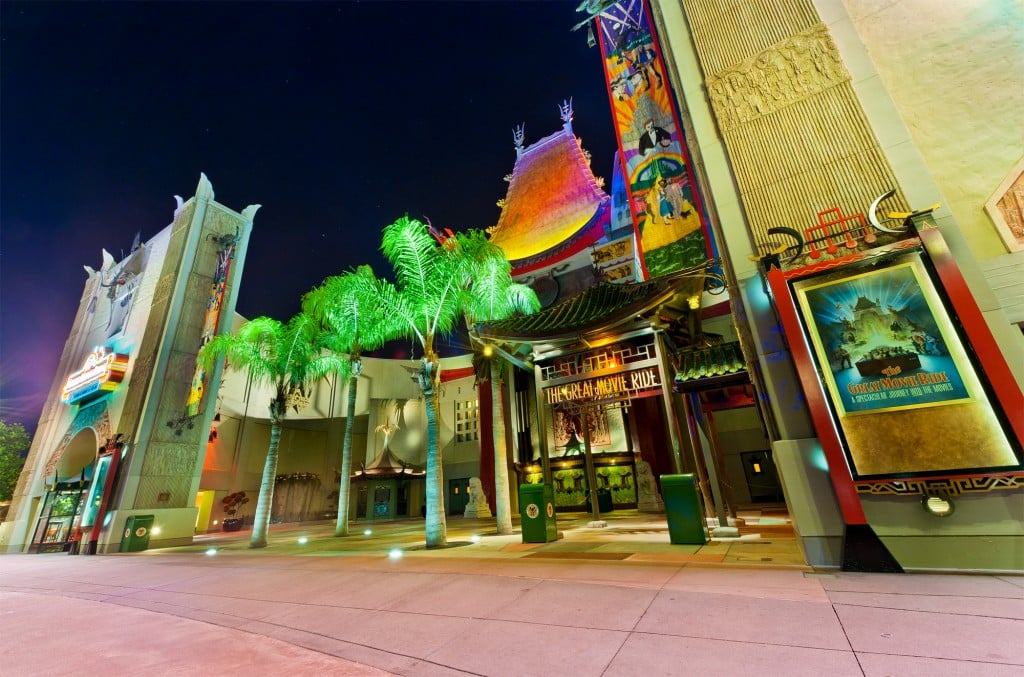 As for the rest of the Disney’s Hollywood Studios expansion, it seems a foregone conclusion that something is going to happen at the Studios. Disney’s Hollywood Studios really needs an expansion and overhaul, and there are plenty of routes the park could take. I previously suggested a shift to a mini-lands structure, centered around expansion of Pixar Place and creation of Lucas Land and Muppets Studios. These idea is just my idea based upon a combination of early 1990s plans that didn’t come to fruition and my own “Armchair Imagineering,” and I certainly don’t expect it to happen…but it sure would be cool!

I know both the Disney’s Hollywood Studios expansion and the Big Sorcerer Hat are topics about which others have strong opinions, so I’m really curious to hear your feedback. I am especially interested in hearing from anyone who disagrees with me about the Sorcerer Hat and can present a reasoned argument in opposition to the points I’ve made here. I honestly don’t think one exists, as most arguments I’ve read center around “I like it because it’s pretty” and it’s “needed” to give the park identity. However, I could be overlooking something.