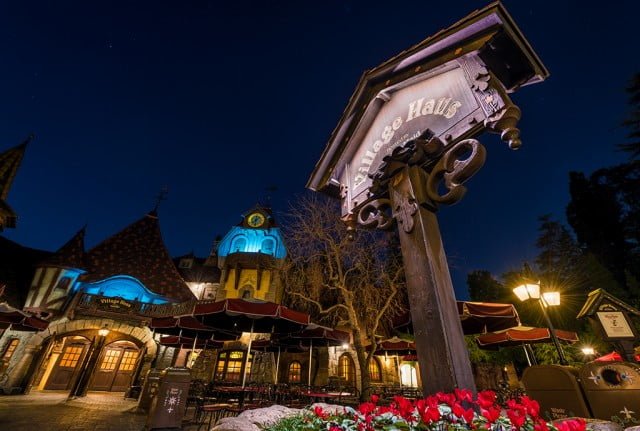 Village Haus Restaurant is a counter service restaurant in Fantasyland at Disneyland. This review features food photos from Village Haus, our take on its ambiance, and other random thoughts about it. The restaurant is fairly reminiscent of Pinocchio’s Village Haus in Walt Disney World’s Magic Kingdom in atmosphere, and in terms of the somewhat similar menus.

It had a classic look to it, but at the same time was a little drab and dreary (the drab and dreary day outside may have intensified this impression). Village Haus had its menu refreshed in 2011, and we first dined there shortly after the new menu debuted.

At the time, this started a sort of renaissance for Disneyland counter service dining, and this location was–to my knowledge–the first to see a gourmet burger and flatbread. The menu includes a premium cheeseburger (the Pastrami Cheeseburger), chicken sausage sandwich, veggie burger, BLT flat bread pizza, pepperoni pizza, cheese pizza, and apple cheddar salad. In addition to these entrees, desserts on the menu include a black forest cupcake and apple strudel. This menu has been virtually unchanged, outside of the addition of seasonal items here and there, for the last 4 years.

We’ve dined at Village Haus several times in the past few years, and here are some thoughts from our visits… 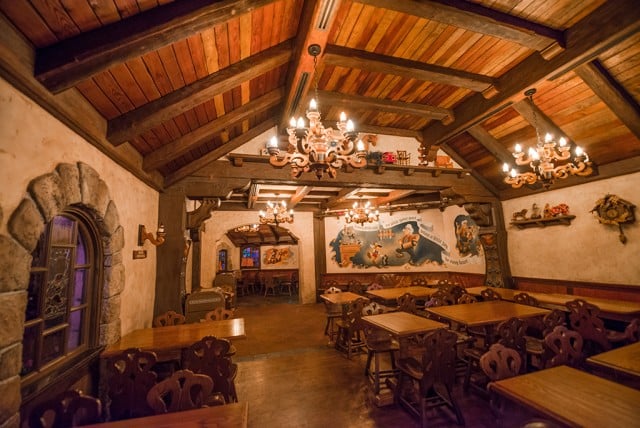 First up is the ambiance. Originally, I thought that Village Haus looked drab and dated, which I found disappointing. 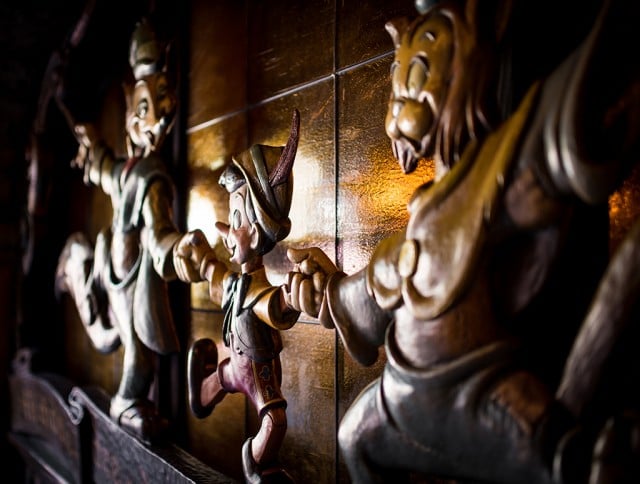 Over the years I have come around to appreciate the style of Village Haus, and now actually quite enjoy it. It’s like a little Bavarian village with a Fantasyland twist, almost like some of the interiors of the Germany pavilion in Epcot, but with more of a cartoon style. 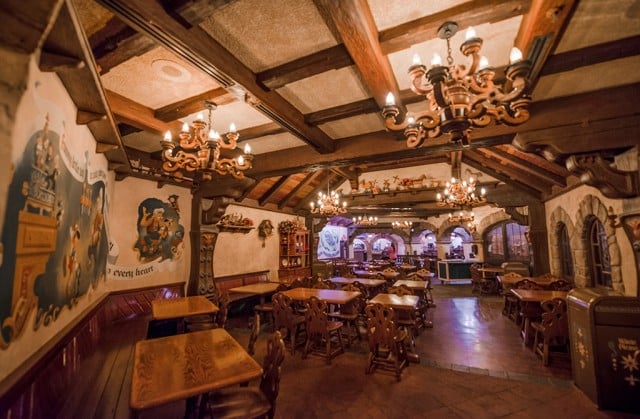 The lighting is a bit low and the colors warm, but this is definitely in keeping with the quaintness of the place, and some of the little details, like cuckoo clocks, a fireplace with accessories and decor around it, and the beautiful Pinocchio murals throughout the restaurant remind give the restaurant a nice sense of intimacy, despite its huge size. 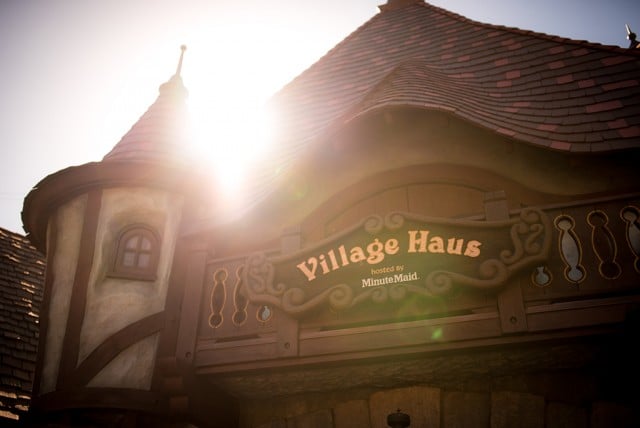 It’s all keeping with the feel of Disneyland, and nicely offsets the chaos of hundreds of families with small children in here during the middle of the day. 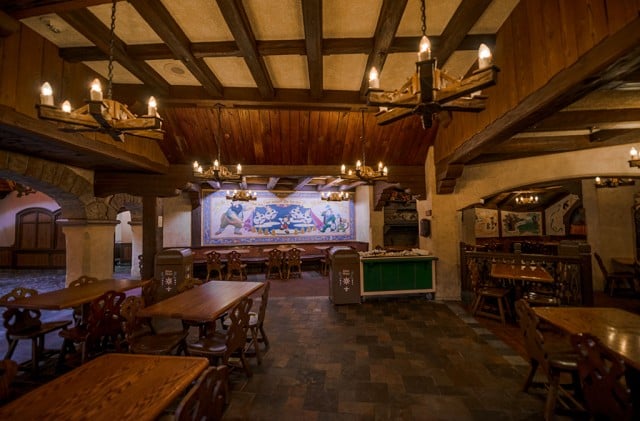 It’s definitely not perfect, and in some places its age does show a bit, but Village Haus has mostly been maintained in great condition, with the kind of artisanship and (in some places) quirkiness that you might expect out of Gepetto himself. 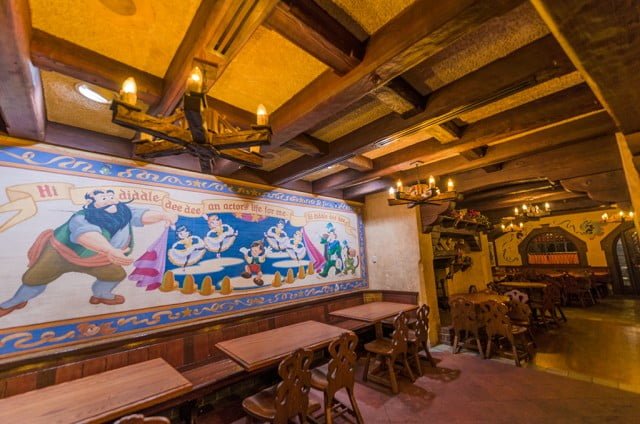 Of course, the murals are cute and tie the place together, and really have a ‘good ole days of Disneyland’ vibe to them. I still don’t think the ambiance is perfect here, but I have warmed to it, and realize I misjudged it in the past.

Now, as for the food. Well, that’s a bit more all over the place… 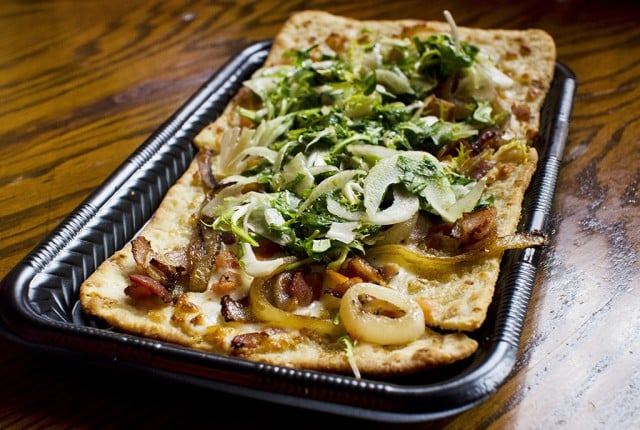 Village Haus Restuarant’s menu is intriguing, with several choices that are a departure from “standard” Disney counter service cuisine. First up is the BLT Flat Bread Pizza, which consists of thin flat bread crust, cherrywood-smoked bacon, provolone and mozzarella cheese, caramelized onions, marinated tomatoes and arugula-fennel salad. This is Sarah’s go-to Village Haus pick, and it has been consistently good when she has ordered it.

This one is pretty tasty, with an interesting combination of ingredients that. It seems more in line with something you’d be able to order as a starter at a moderately-priced table service restaurant rather than something available at a counter service restaurant. We highly recommend this. 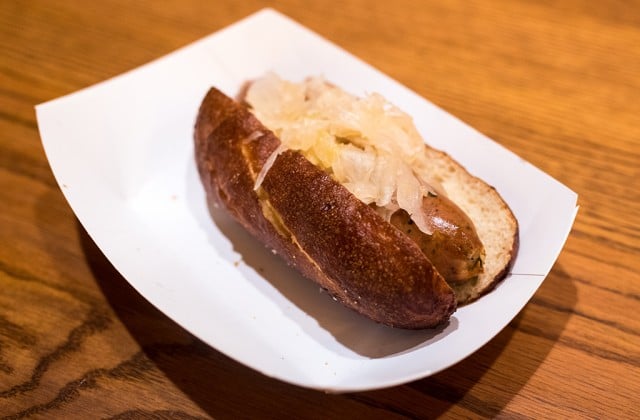 Then, on the other end of the spectrum, you have the 2 standard pizzas on the menu. Unfortunately, I don’t have photos of either of these, but we’ve tried the pepperoni one, and it’s no more impressive than anything you’d find at Redd Rockett’s Pizza Port over in Tomorrowland (read: not impressive at all).

Along those same lines is the Chicken Sausage in Pretzel Roll (above). Like all Disney hot dogs/sausages, this offers terrible value and is mediocre. Not bad, not good, but something I can never recommend because it’s not at all filling. The sausage itself here is actually quite good, but the bun is dry and bland, and the sauerkraut only does a little to help. Not recommended. 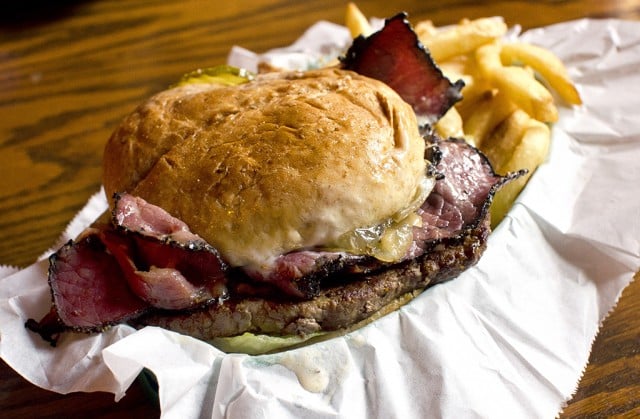 The Angus 1/3 lb Pastrami Cheeseburger is a gourmet burger, and I initially thought it had a lot of promise. Given its status as a signature item, I was a bit surprised that it would be served wrapped up the way it was. 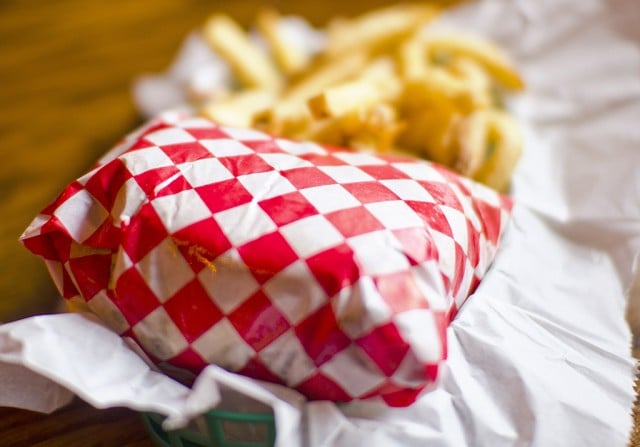 This likely doesn’t affect the taste, but it still makes it seem like less of a signature item. As far as taste is concerned, the burger is good, but not great. The melted Swiss cheese is excellent, and the pastrami added an interesting twist to the burger, but I don’t think all of the flavors quite mesh here. The end result is a burger that is nothing exceptional. For an expensive burger, I expect a bit more. 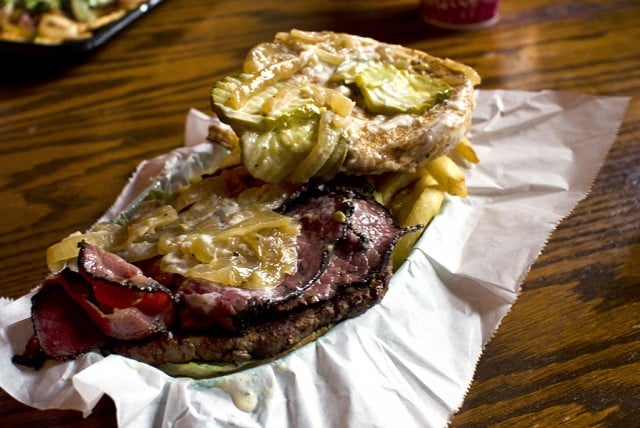 Back when this was introduced, I was excited because I thought it meant that each restaurant serving burgers would have a unique “signature” burger added to its menu, unfortunately, this has not proved to be the case. 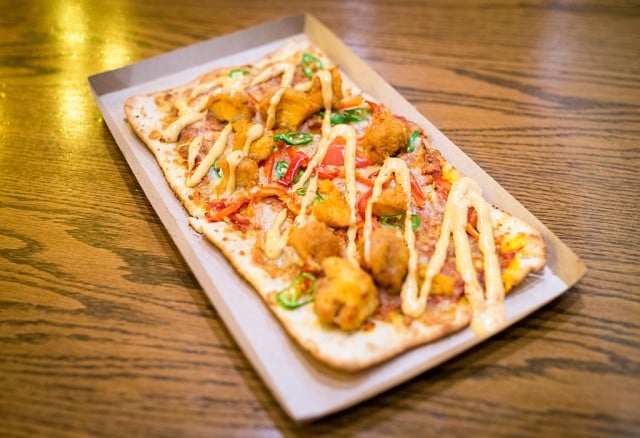 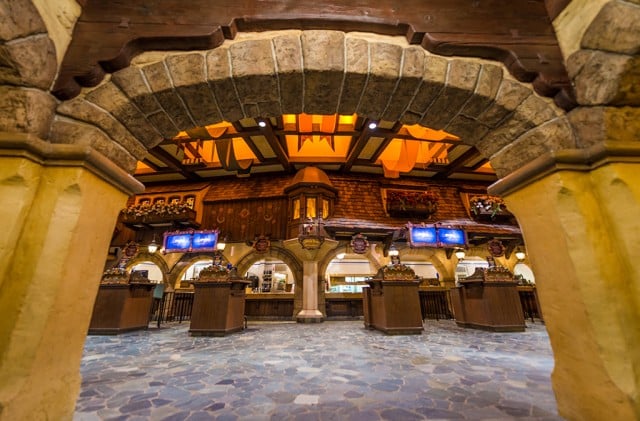 Overall, Village Haus Restaurant isn’t bad, but it isn’t great. The theming of the restaurant is quaint and charming, although that all goes out the window if you dine here at lunch when hundreds of other families with kids also descend upon Village Haus. While some of the menu items are pretty good and unique (points for trying!), it doesn’t quite stack up to other recently refurbished restaurants at Disneyland, like Hungry Bear Restaurant. It’s a place we visit from time to time because there are a couple of menu items here that we really like, but as a whole, the menu just isn’t that solid–especially if you don’t like the couple of really good things here. I really want to love Village Haus since it’s a bit of a throwback to the older days of Disneyland, but I just can’t give it an extremely glowing review until the menu is beefed up again.

Are you a fan of Village Haus and that Pastrami Cheeseburger, or even with its new menu are you not a fan? Share your thoughts in the comments!