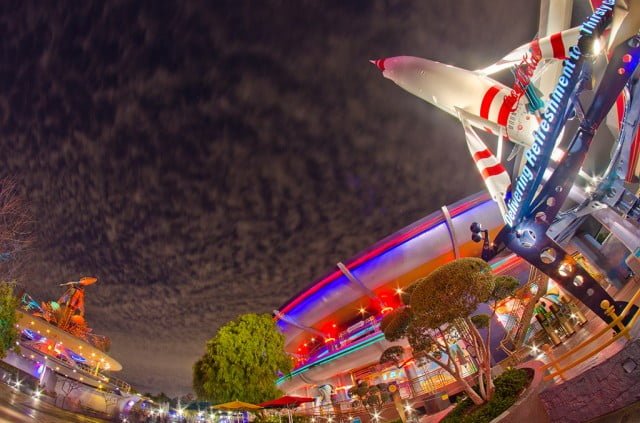 Alien Pizza Planet is a counter service restaurant in Disneyland’s Tomorrowland. This review offers food photos, thoughts on atmosphere, other random tidbits about this dining option, and whether it’s worth including in your Disneyland itinerary given the quality and price-points.

Alien Pizza Planet features a menu that, unsurprisingly, includes pizza, along with pasta serving pizza, meatballs, and pasta in Disneyland’s Tomorrowland. The restaurant offers an Annual Passholder discount of 10-15%. Pizza Planet is housed inside the former location of the Mission to Mars attraction, and a tribute to the old Moonliner rocket sits in front of the restaurant.

We’ve been to this restaurant an embarrassing number of times. Most of those visits were when it was Redd Rockett’s Pizza Port. It has since received what was billed as a temporary Alien Pizza Planet overlay, but since that overlay is still around over a year later, it’s likely permanent. Nonetheless, it’s exactly the same restaurant with the same menu and same interior decor, just a different name and sign out front.

The first time it was mediocre, but we enjoy the location in Tomorrowland and have heard some positive things about the restaurant, so we decided to head back a second time. The food was a little better the following time, and free refills were nice, but it didn’t even come close to comparing to Hungry Bear Restaurant, Rancho del Zocalo, or some of Disney California Adventure’s new restaurants.

Why do we keep going back…do we hate ourselves? 😉 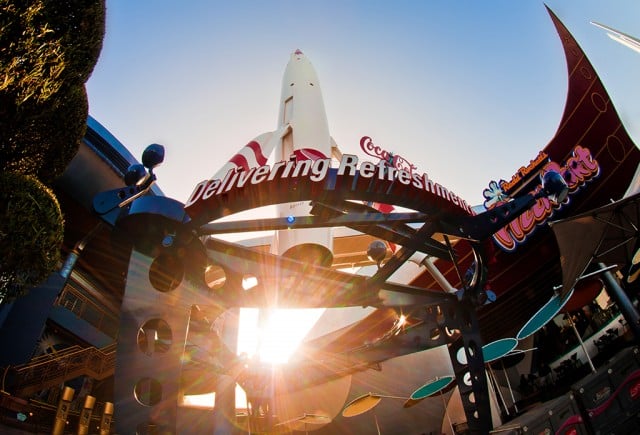 The theming at Alien Pizza Planet isn’t all that impressive, but the old attraction posters on the wall inside are really cool (and I’ve heard these are actually from Tony Baxter’s personal collection). For whatever reason, we really like eating in the pavilion seating across from the Space Mountain queue entrance. Not a lot of people head up here, so you can hear the background music and watch people queue up for Space Mountain. You can also head outside to eat under the Moonliner rocket.

If you look around in the seating area near Space Mountain, you can find some alien dinosaur eggs. These eggs were added during the infamous New Tomorrowland project in the 1990s, and have never really been explained, nor is there much online coverage concerning this detail. Although in absolutely no way relevant to this review, they’re fun to spot, though, and you can impress your friends with your obscure Disney knowledge by pointing them out.

Pizza is your standard Disney pizza by the slice. It’s no better or worse than average frozen pizza you’d heat up, and I suspect it contains plenty of processed stuff that I’d rather not think about.

The first couple of times we dined here, we went in the middle of the afternoon and had some slices that had clearly been under the heat lamps too long. The slices were rubbery and left a lot to be desired. 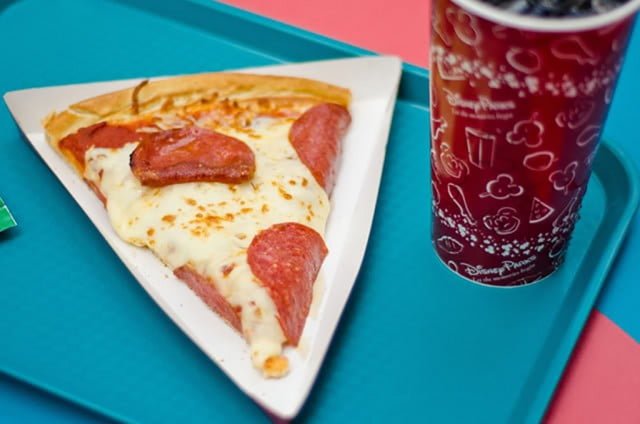 After having a pretty bad experience at this restaurant, we were told we had to head back we were “doing it wrong” by going at off-hours.

This made sense, as the pizza sat out under heat lamps, so if you go at a time that’s not busy, your food is less-than-fresh. We also heard we were making a grave error by not ordering the Count Down Chicken Fusilli. So we gave it another try. 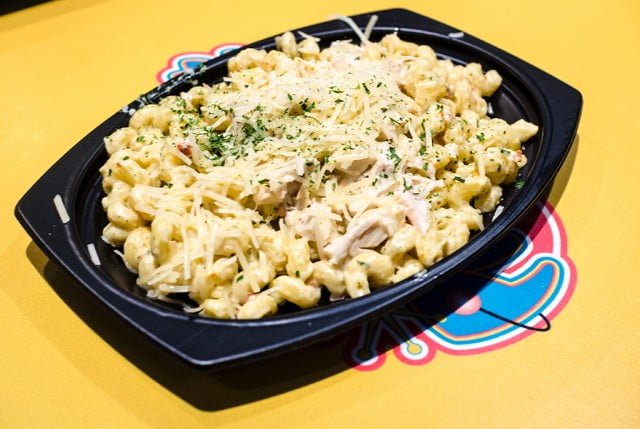 Turns out the third time was the charm, as we finally had a halfway decent meal on our third visit. We visited right during the busy dinner rush and ordered both the chicken fusilli and a slice of pizza.

It turns out that the Count Down Chicken Fusilli is the real “star” of the menu (air quotes around that, as we’re using the term very liberally). It’s served in a large portion and consists of fusilli pasta tossed with grilled chicken, sun-dried tomatoes, garlic, parmesan cream sauce, and topped off with fresh basil. For less than $10, it’s actually fairly reasonably priced given its taste and portion size. If there are two light eaters in your party, they could possibly share this dish and be satisfied.

Still, nothing amazing, but not entirely awful. Add to that a couple of drinks with free refills and we had a worthwhile meal. Not one of the better counter service meals we’ve had at Disneyland, but much better than what we had previously. 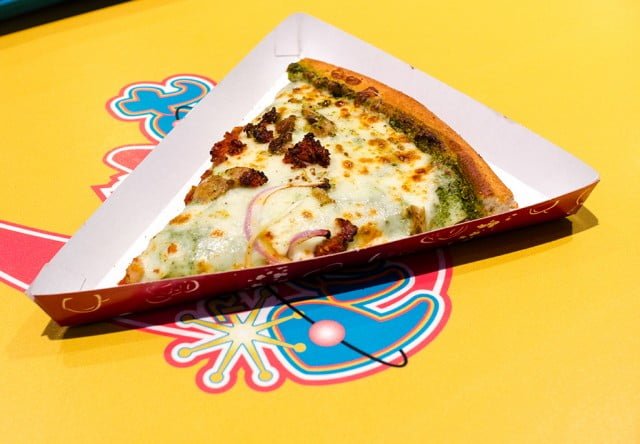 As is probably evident by this point in the review, the pizza here is different than at most other Disneyland Resort locations, like Village Haus Restaurant, where flatbread is the option of choice. While I normally prefer thick crust pizza, It seems to me the quality of the flatbreads is much higher and Disney is more ambitious with the ingredient combinations (the BLT flat bread is a great example of this).

It’s entirely possible to make an excellent quality thick crust pizza, but it doesn’t seem the alien cooking crew is aware of this fact. I’d like to see some improvements made on this front at Alien Pizza Planet. The pizza can be okay when fresh, so long as you don’t mind the processed, greasy pizza it serves. At its best, it’s marginally tolerable, but also not terrible. Sort of like pizza with an asterisk mark. 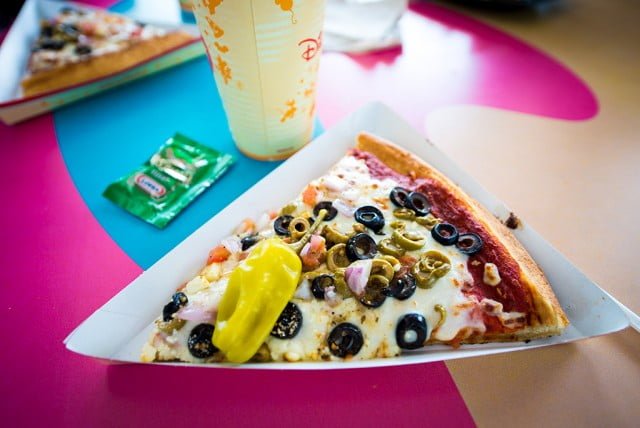 One possible upside is that Alien Pizza Planet occasionally has special seasonal pizza that are slightly more ambitious than their normal fare. We’re sort of grasping at straws by this point, but hey, at least it’s something.

In terms of value, Alien Pizza Planet may seem reasonably priced at around $7 per slice, but the slices are not sizable-enough to constitute an entire meal. You’ll either want to order two slices or order a side. We’ve been unimpressed by the bread sticks in the past. If you do go at a slow time and the pizza under the lamps looks less than appetizing, consider ordering a gluten-free pizza. It’s made fresh for you, and we’ve heard it’s pretty good. We’ve never done this ourselves, but it’s an option to consider.

Overall, Alien Pizza Planet can be an okay place to eat in Tomorrowland if you don’t mind pasta or guilty pleasure “pizza.” We’ve some decent meals here, as mentioned above. However, its inconsistency and basic menu cannot be overlooked, and you’re fairly likely to have a bad meal here. Even its best dishes pale in comparison to middle of the road stuff elsewhere.

Restaurants should offer good food without guests having to know the “secrets” to getting a good meal. Alien Pizza Planet falls short there, and is penalized in this review accordingly. Plenty of people probably eat here because it’s a safe option with items that will please kids, but do yourself a favor and eat at one of the many Disneyland counter service restaurants that have menus containing both more ambitious items for adults and simplistic stuff for kids.

What do you think about Alien Pizza Planet? Is it a “good enough” spot for some guilty pleasures, or do you opt to dine elsewhere? Do you agree or disagree with our assessment? Any questions? Hearing your feedback–even when you disagree with us–is both interesting to us and helpful to other readers, so please share your thoughts below in the comments!