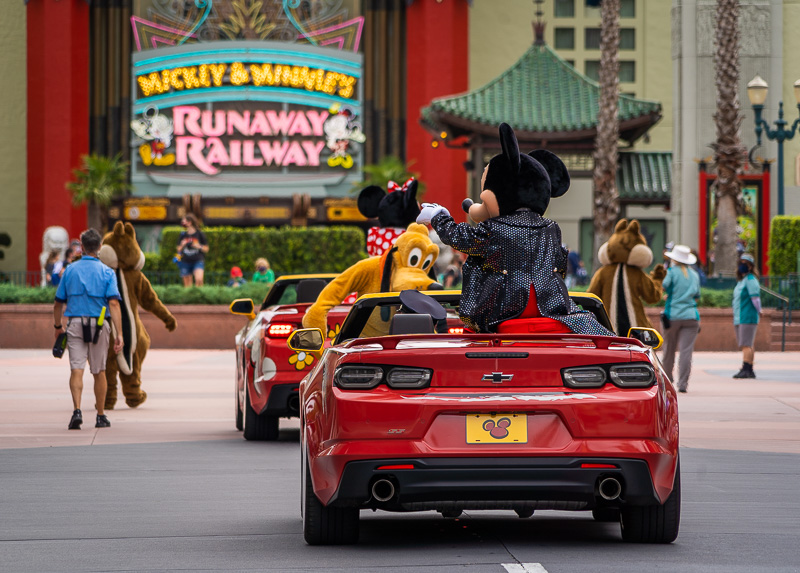 We’re back at Hollywood Studios for our first visit since DHS Reopening Report: A Tale of Two Visits. In this Walt Disney World photo update, we’ll share a look at the brand new Society Orchestra Beauty and the Beast stage show, another attraction being retired, low crowds & wait times, and more.

Since our last visit, Walt Disney World adjusted the virtual queue for Star Wars: Rise of the Resistance at Disney’s Hollywood Studios, consolidating the 1 pm and 4 pm boarding pass ‘drops’ into a single 2 pm one. Generally speaking, his was a smart and guest-friendly decision. Both of the latter two distribution times had low inventory, and were incredibly difficult to join. The single distribution time makes things easier.

Or so we’re told. While we like this move, it disadvantages us. We have no desire or need to arrive at Disney’s Hollywood Studios before 2 pm, as the entire park can be “done” with a ~4 pm arrival. We love the Star Wars: Galaxy’s Edge E-Ticket, but our hatred of summer weather outweighs that. See you in November (curse you, Daylight Saving Time!), Rise of the Resistance!

Whereas the other three parks see increased crowds on the weekends due to locals, that’s not true of Disney’s Hollywood Studios. The difference is that the former three are never hitting even their limited capacity and crowds are thus limited by organic demand, which is higher on weekends. 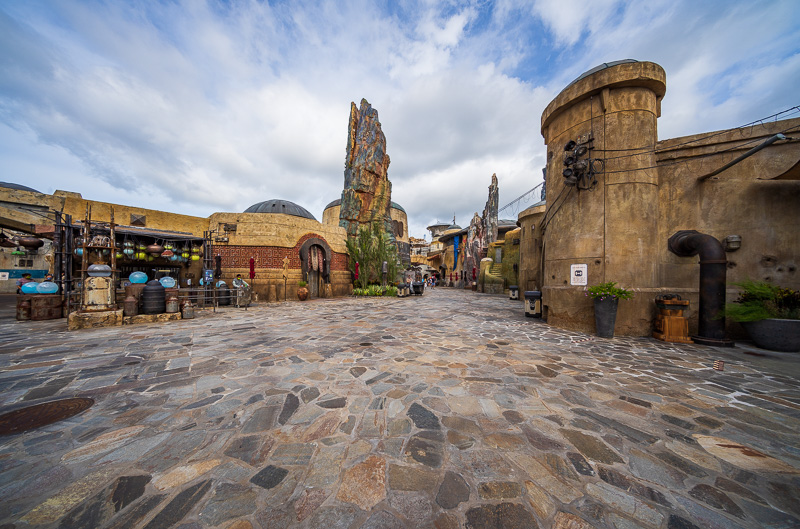 By contrast, Disney’s Hollywood Studios is hitting the same threshold every single day of the week. This is due to a mix of its capacity being ridiculously low and DHS being home to Walt Disney World’s two newest and most popular rides.

As such, there’s no difference in crowds between Wednesday and Saturday or Sunday. The park is equally “full” every day of the week. Plan accordingly if you’re a tourist and do Disney’s Hollywood Studios on the weekend! 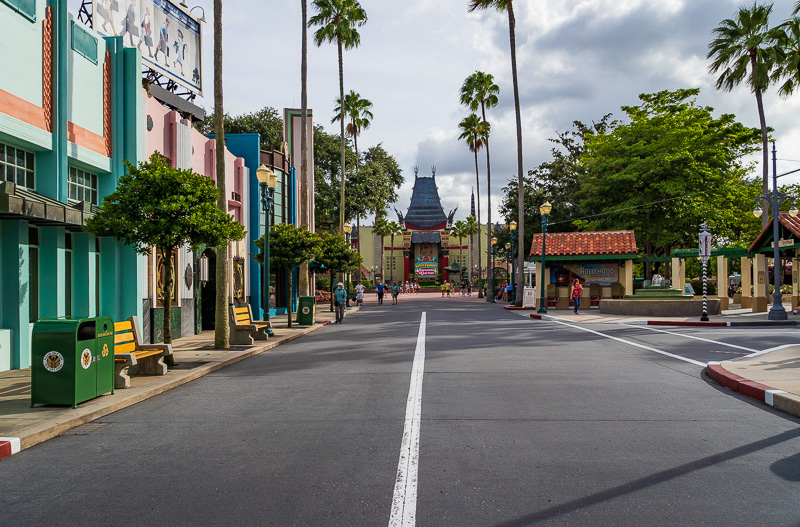 Unsurprisingly, crowds are pretty sparse pretty much everywhere we went in the park.

Judging by wait times, Disney’s Hollywood Studios was much busier before 2 pm, but dropped off after that. 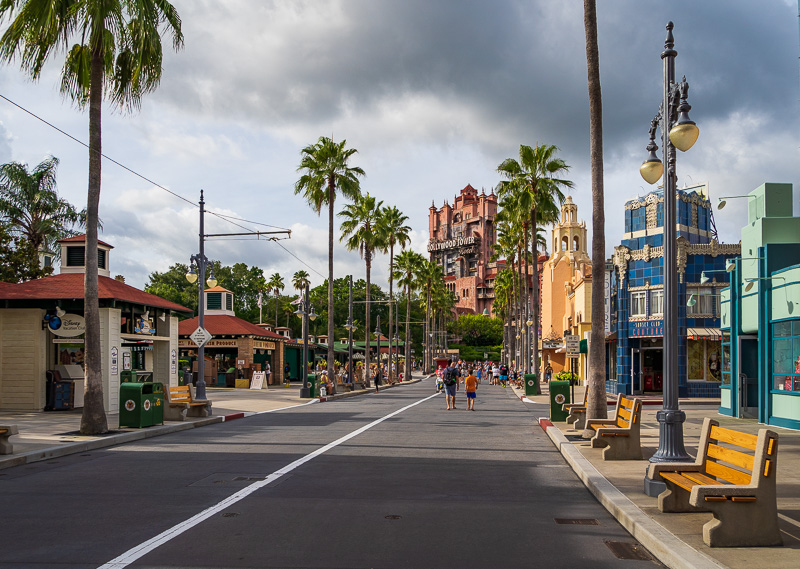 All of these photos were captured between around 4 and 7 pm.

Wait times were all pretty much 5 to 30 minutes for the duration of our visit.

Above are the highs as of 6 pm.

In our experience, wait times for pretty much everything aside from Mickey & Minnie’s Runaway Railway have been inflated. It’s not so bad with the above times, but earlier in the afternoon you might see Tower of Terror or Rock ‘n’ Roller Coaster with posted times of 30-40 minutes when they’re actually around 10 minutes–or walk-ons. 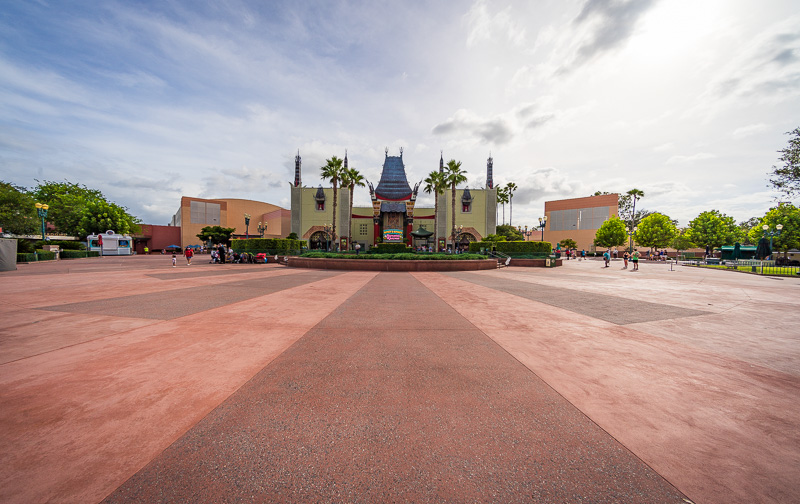 Even the line for Mickey & Minnie’s Runaway Railway was pretty short by the end of the evening.

My working hypothesis is that more locals are doing DHS on weekends, and they’re less inclined than tourists to stick around for the full day. Insufficient data to support this theory, but it passes the smell test, I think. 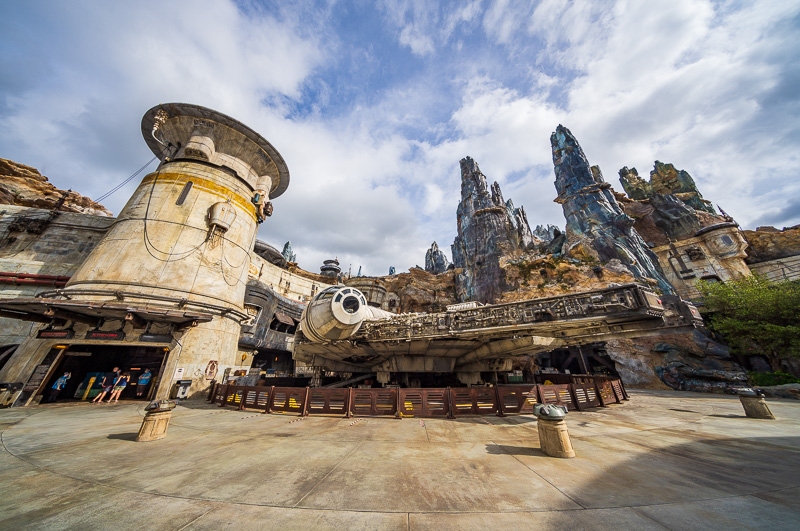 I remember this scene on opening day at Disneyland when it was unexpectedly uncrowded and thinking, “I’ll never see this area like this ever again.”

Then I remember the same empty courtyard during Extra, Extra Magic Hours and thinking, “I can’t believe this happened again.” Same thing a few months later when Star Wars: Rise of the Resistance debuted and the park quietly opened at like 5 am for a few weeks. 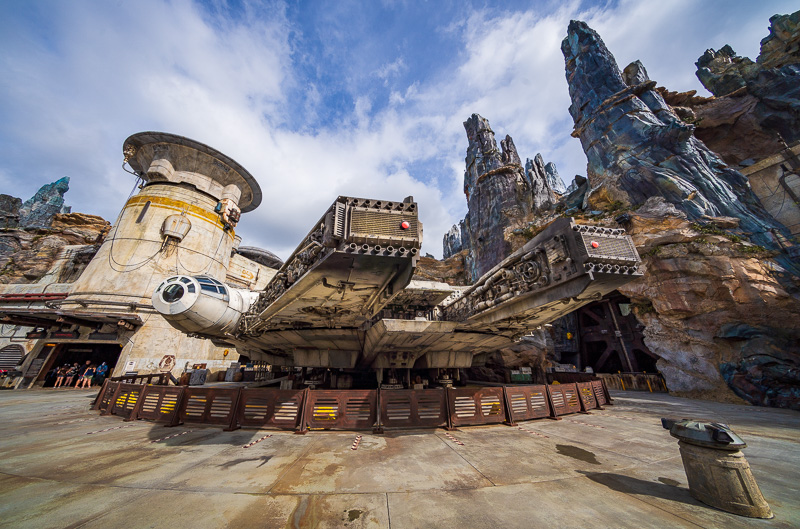 I’ve become numb to it. Now I’d do a double-take if this area were busy. (If it’s never going to be busy, Disney should liven it up by designating it as the official lightsaber duel zone–just put up some more liability disclaimer warnings!)

Honestly, that’s what I’d prefer to see–not necessarily the duels, just crowds in general. It has been a rough first year for Star Wars: Galaxy’s Edge, and the land deserved so much better. I still think it’s incredible. 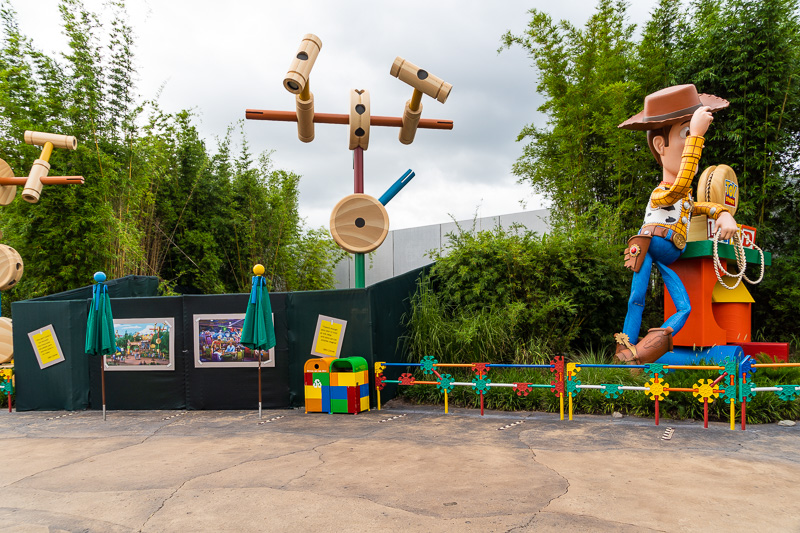 At the opposite end of the quality spectrum, here’s a look at what will be the entrance to Roundup Rodeo BBQ Restaurant. Walt Disney World really timed its “new things without windows” additions poorly. Somehow I do not see that trend catching on.

This is something Toy Story Land “needs,” but like so much of this land, the idea seems phoned in and full of squandered potential. No clue when Roundup Rodeo BBQ Restaurant will open at this point–probably late 2021 or early 2022. 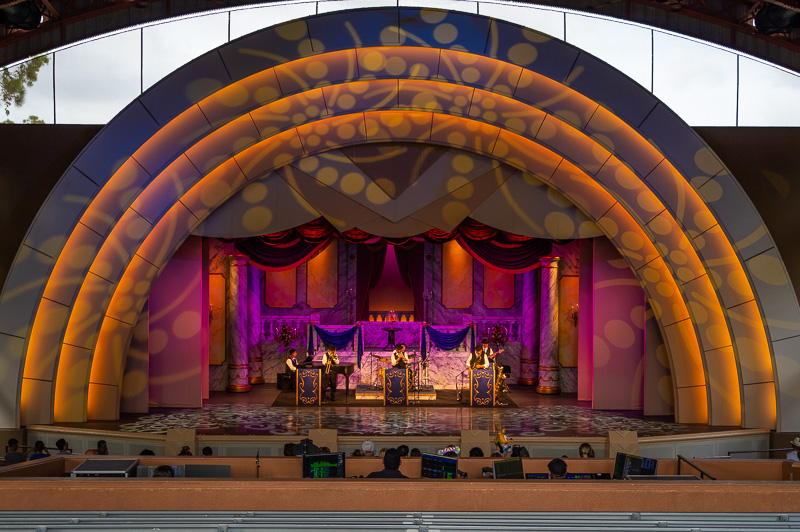 Getting to the “Addition & Subtraction” post subtitle, let’s look at the brand-new show that made its unannounced debut today at Disney’s Hollywood Studios in the Theater of the Stars on Sunset Boulevard.

In the Hollywood Bowl-inspired venue, Disney Society Orchestra and Friends (temporarily?) replaces Beauty and the Beast: Live on Stage. 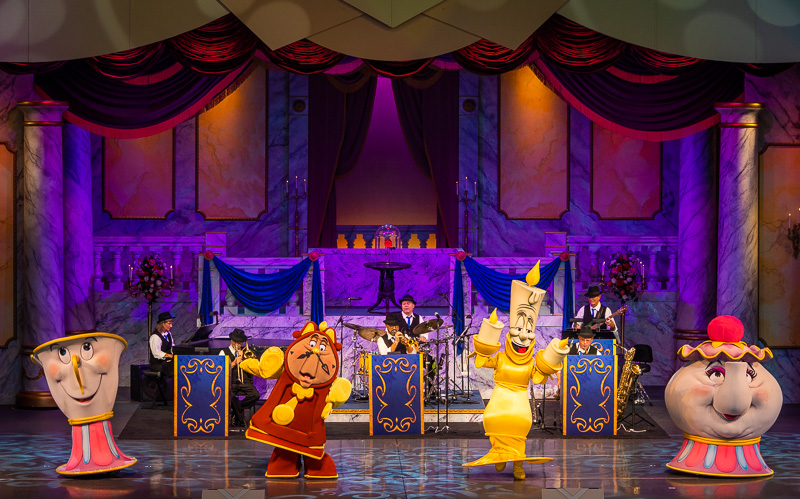 For the show’s second to last song, Beauty and the Beast characters appear on stage. 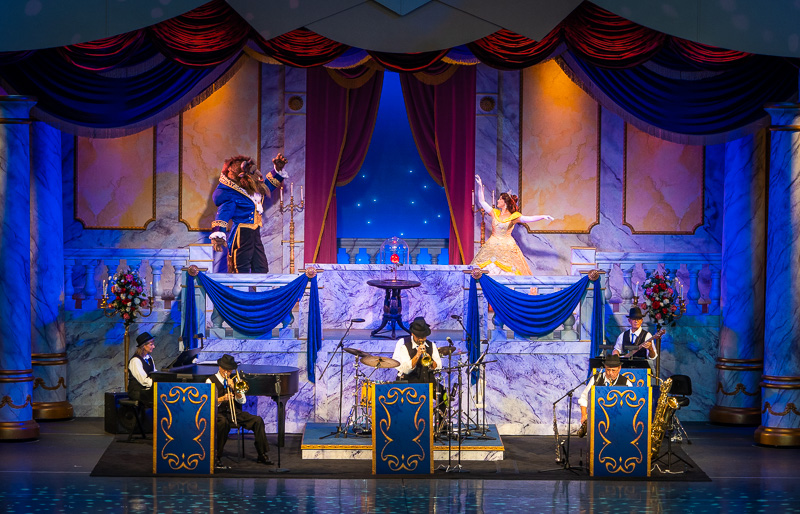 For the finale of Disney Society Orchestra and Friends, Belle and Beast appear in the “balconies” above the stage.

Due to physical distancing, the characters don’t actually dance together, but it’s a cute way to end the show. 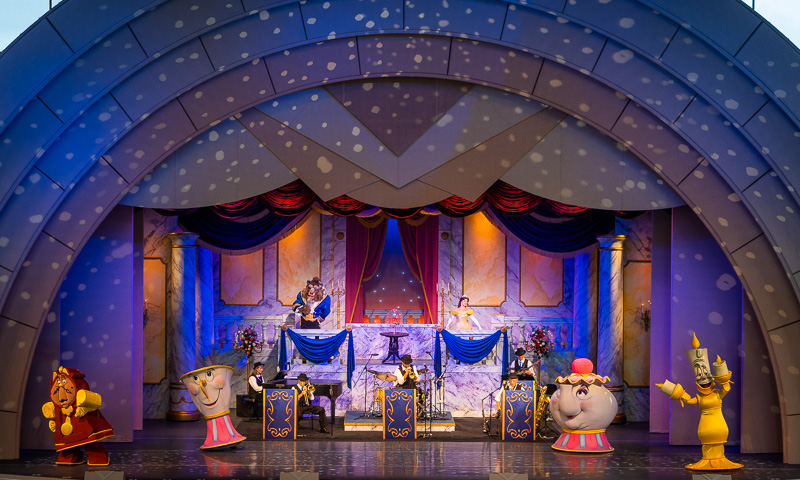 As a bit of background in case you’ve missed it, Walt Disney World is currently in the midst of a bitter standoff with the Actors’ Equity Association, the union that represents most in-park performers.

This has been an ugly, public battle (at least on the part of the Actors’ Equity Association–Disney has mostly carried on silently) with the union leadership doing interviews and making videos attacking Walt Disney World. 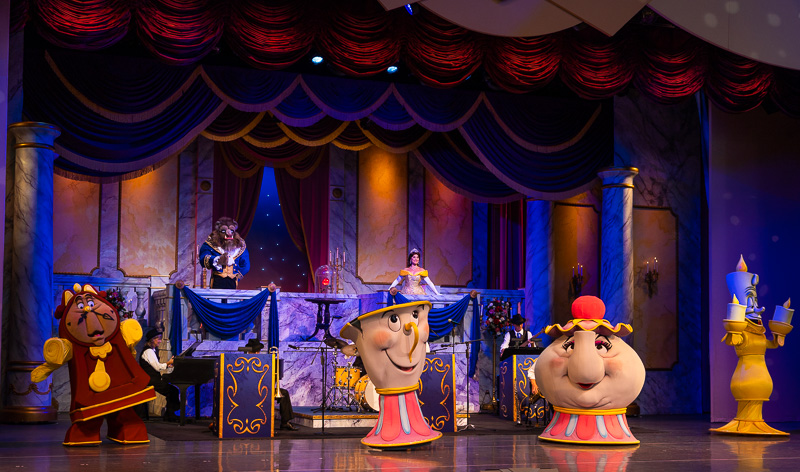 This has been ongoing for several weeks, and my initial reaction was “this isn’t going to end well for the union.” From the outside, it appears that they’re concerned less with negotiating a path forward for their members to return to work, and more about setting a precedent and making Disney look bad.

It would also appear that the overwhelming majority of Cast Members–including those in the Actors’ Equity Association–share this view. (See the 180+ comments to the “Welcome Home” Facebook video posted by the union.) 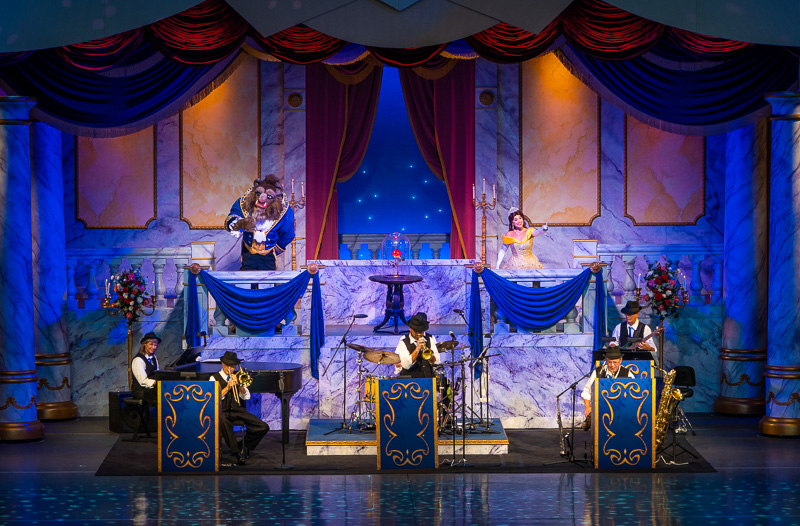 We don’t really have a dog in this fight, but sincerely hope the union and Walt Disney World can set aside their animosities and work out a deal. It’s unfortunate and disappointing to see the Cast Members put in the middle, seemingly treated as pawns.

It should go without saying, but it’s in everyone’s best interests for equity entertainment to return. Unfortunately, that seems pretty far from happening. 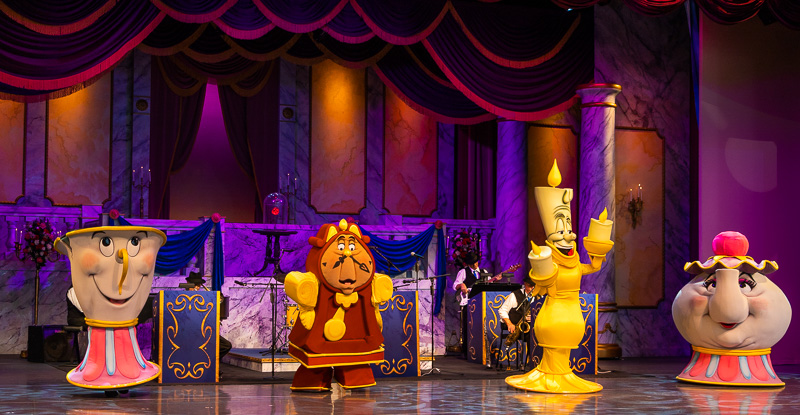 It’s certainly not as elaborate as Beauty and the Beast: Live on Stage, but it’s also not nearly the commitment or effort. For what it is–a cool, open air diversion with mellow music–it’s solid. 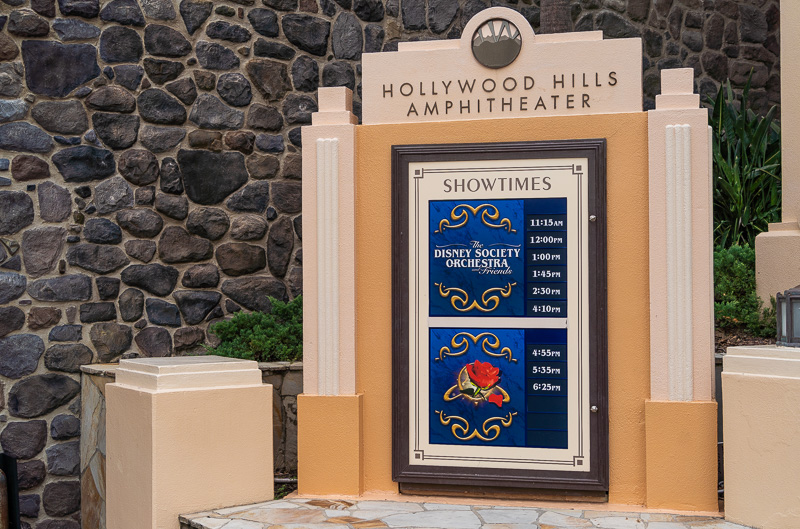 Sets are pretty frequent, to the point that you should be able to see one or two without any pre-planning. Of all the big changes at Walt Disney World, the most peculiar for a lot of planners is that spontaneity wins the day.

In our view, this is exactly the type of thing Disney’s Hollywood Studios needs right now. The ride lineup is stacked and top-heavy; it’s the entertainment and smaller-scale offerings that could use rounding out. 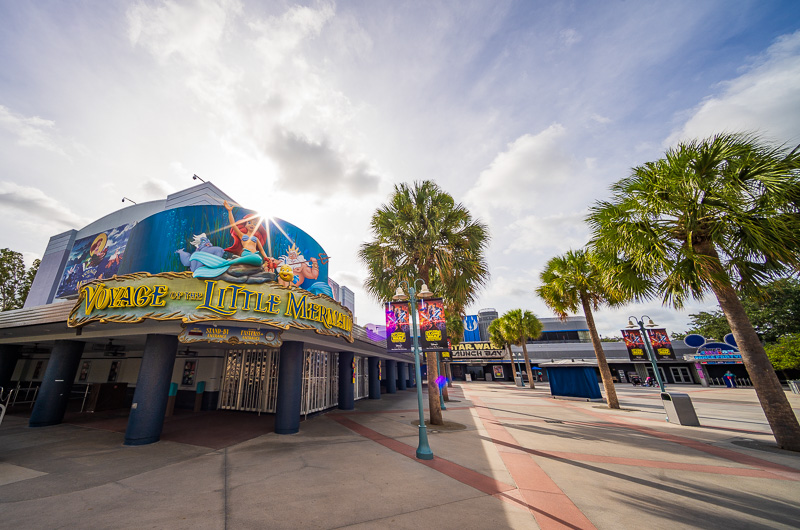 On the subtraction front, BlogMickey is reporting that the Voyage of the Little Mermaid puppet and stage show has been permanently retired.

There have been rumors about the potential closure of this for a while, so it doesn’t come as a huge surprise. The show had a good run–it’s now old enough to vote! 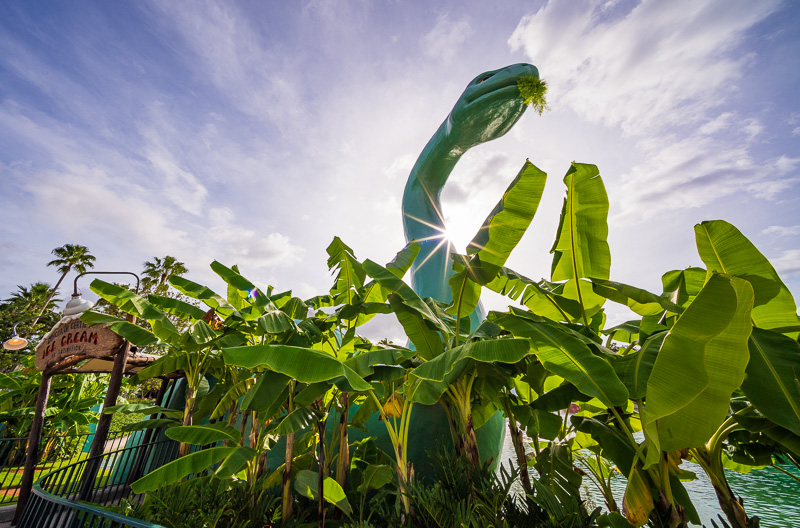 Ultimately, Disney’s Hollywood Studios needs to be adding more shows rather than subtracting them. It’s highly unlikely that Walt Disney World is going to develop ambitious new concepts, so the options are either hammering out a deal with the union or more capacity-adding quick-fixes like the Disney Society Orchestra & Friends. The former is obviously preferable, but we’ll take either at this point.

As it stands, Disney’s Hollywood Studios continues to be Walt Disney World’s most frustrating park if you experience it like a normal guest. The morning rush and boarding pass dash are a hassle, there’s not enough to fill a full day, and now you can’t even park hop. Our immediate suggestion to Disney would (again) be to allow guests with Park Pass reservations to attempt joining the virtual queue without entering Disney’s Hollywood Studios. On the plus side (for us!), all of these issues make Disney’s Hollywood Studios a great late afternoon arrival park, but only if you’re willing to skip Star Wars: Rise of the Resistance. Hardly recommended for the vast majority of people reading this.

Have you visited Disney’s Hollywood Studios since the park reopened? What was your experience? When did you arrive? How long did you stay? If you’ve yet to visit, will you be attempting to join the modified virtual queue for Star Wars: Rise of the Resistance? Do you plan on arriving at rope drop, or will you utilize a late arrival strategy? What do you think of the Disney Society Orchestra? Do you agree or disagree with our assessment? Any questions? Hearing your feedback–even when you disagree with us–is both interesting to us and helpful to other readers, so please share your thoughts below in the comments!