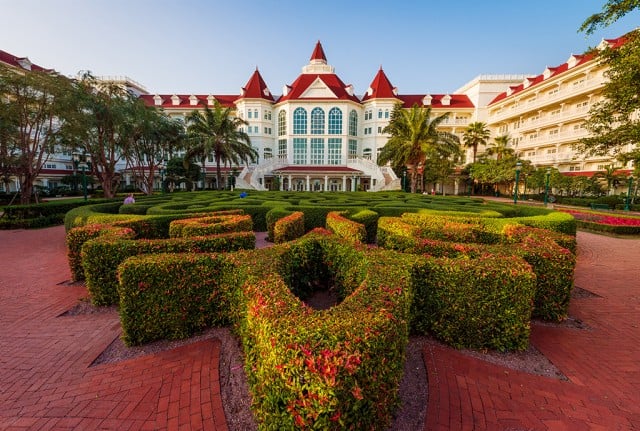 Although the exterior of the hotel bears a striking resemblance to the Grand Floridian and the theme is basically the same, the interior is a substantial departure (in substance, not style). Whereas the Grand Floridian has a large, opulent looking lobby, the lobby of Hong Kong Disneyland Hotel is significantly smaller.

The lobby was still quite nice, with a high ceiling, nice chandeliers, and beautiful Christmas tree, and I enjoyed a couple of late evenings relaxing in it. These large lobbies seem to be a fixture of only the Walt Disney World resort hotels, as I can’t think of any Disney hotels outside of Walt Disney World (and the Grand Californian) that have them. Even the lobbies of the gorgeous Tokyo Disney Resort hotels are compact by comparison.

This is not to say Hong Kong Disneyland Hotel is any less luxurious than the Grand Floridian–a hotel isn’t defined by its lobby. To the contrary, while the Grand Floridian is superficially classy, upon closer inspection, many of the details are woefully dated. It’s sort of like one of those hip, new ‘fusion’ restaurants that combine seemingly unrelated culinary styles. Except in the case of the Grand Floridian, the result of “early ’90s” plus “Victorian” does not yield the best of results.

Much to its credit, Hong Kong Disneyland Hotel sheds this layer of 1990s style and captures a pure Victorian theme. Everything from the carpet to the light fixtures to the art on the walls is tasteful and classy. Like any Disney hotel, it contains nods to Disney characters, and these are all well done.

Perhaps what was most impressive to me was the amount of beauty in places it wouldn’t be expected. For example, this gorgeous staircase below was at the end of some side hallway that you wouldn’t find unless you were deliberately looking for it. (My guess is that a stairway this nice might be placed out of the way for wedding photos…otherwise I’m at a loss as to why it’s “hidden.”) 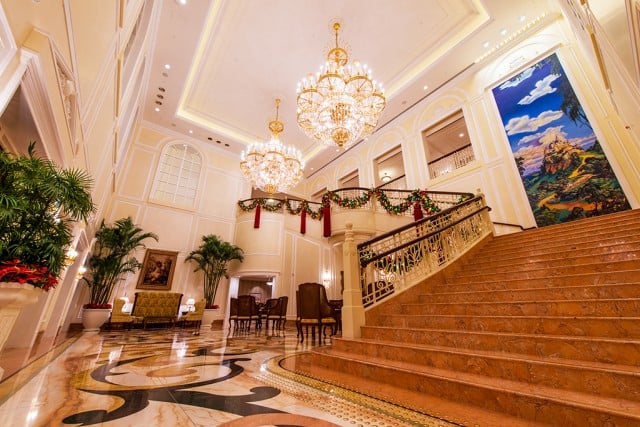 Every Disney hotel around the world charges a premium for being on-site, regardless of the actual benefit that confers. In the case of Hong Kong Disneyland Hotel, the biggest perk is its location. Lantau Island does not have much in the way of hotels, and the non-Disney hotels that are there don’t all offer easy access to the park.

As a result, our options were essentially to stay in Hong Kong and take the MTR to Hong Kong Disneyland, or to stay at one of the two Disney hotels near the park. Regardless of where we stayed, we would have had at least one transfer, as nothing else is on the Disneyland Resort Line of the MTR. Although there were some deals to be found, the nice hotels we found in Hong Kong central were all above $150. For a nice non-Disney hotel on Lantau Island, the prices were around $200.

Obviously, your mileage may vary on all of these rates (we’ve heard of much better rates at Hong Kong Disneyland Hotel, and I personally find it difficult to imagine that there aren’t times when a nice, reasonably close hotel is around $100/night), but this was our experience. Given that and our general preference to stay on-site, Hong Kong Disneyland Hotel was the obvious choice for us. 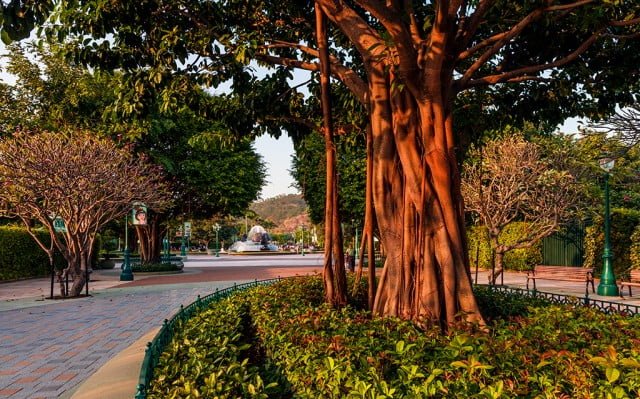 As an additional plus, the hotel is about a $20 (US) cab ride to Hong Kong International Airport. If a 10 minute walk is too much (and it seemed to be for a surprising number of guests…don’t these people largely live in Hong Kong and walk a lot?), there are also shuttle buses to the park. It’s a nice little scenic walk, we recommend using your feet to get to the park.

In terms of the accommodations themselves, the hotel definitely lived up to its flagship status, for the most part. Let’s take a look at some of the highlights. 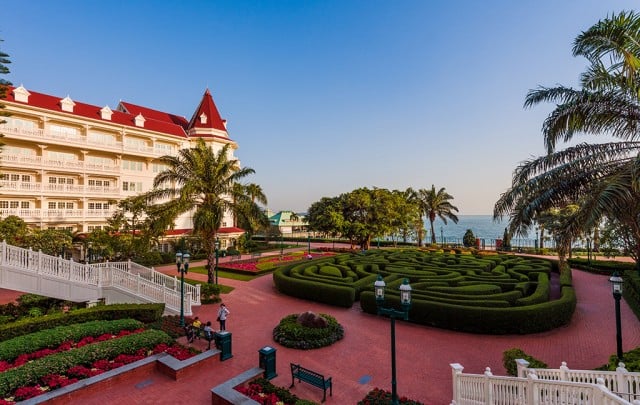 The defining feature of the hotel is definitely the Mickey Mouse hedge maze located right outside the lobby. It is so simple, but so cool. This seemed popular among guests, and even when I came out in the early morning hours there were people in it.

All that the scene needed was some parasols and croquet and it would have seemed like a scene out of 19th century Britain rather than 21st century Hong Kong. 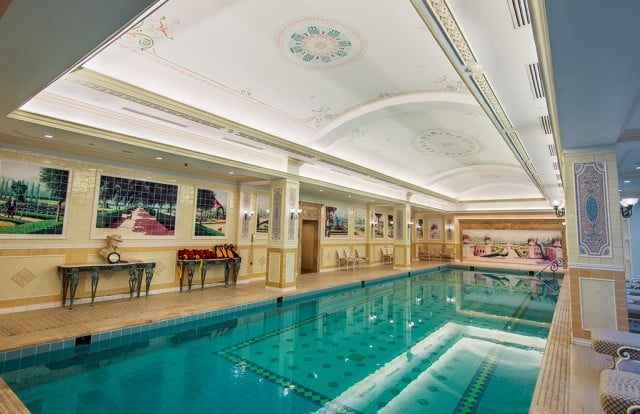 Our room overlooked the main outdoor pool, but we were much more impressed by the beautiful indoor pool.

The ceiling and tilework here were beautiful, and although we never swam in it, it looked like a very nice pool. In addition to these pools, there are also tennis and basketball courts, and a walking/running path around the hotel. 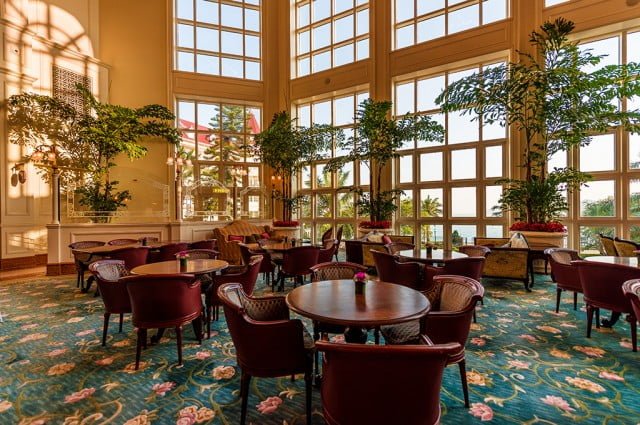 The hotel also had several restaurants. Walt’s, Enchanted Garden, and Crystal Lotus were the main locations, with a small lounge also in the hotel.

To our dismay, there were no counter or quick service options in the hotel, so grab and go breakfast wasn’t possible. We dined at each of these restaurants and will review them individually. Suffice to say, we really enjoyed them all. Walt’s is the mid-range restaurant, Enchanted Garden is a character buffet, and Crystal Lotus is fine dining.

All of the common areas and amenities were nicely done and what you’d expect for a hotel of this caliber. Then you get to the guest rooms… 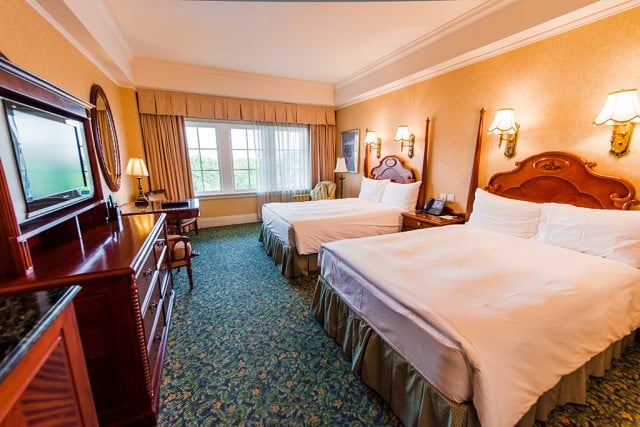 I’ve complained about Disney hotel rooms a lot, and by comparison to most other rooms, our room at Hong Kong Disneyland Hotel was actually very nice.

It didn’t look dated and the bedding was nice, and those two things alone are fairly significant victories in Disney terms. 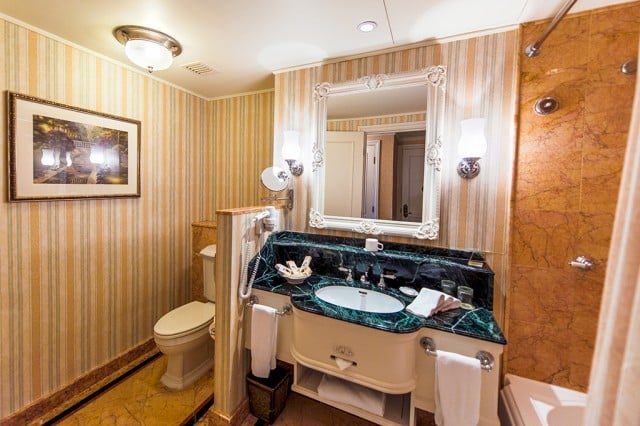 The bathroom was also pretty nice in terms of detail and finishing (note the Seven Dwarfs in the mirror and tile in the tub), but it felt a bit cramped.

They did include a nice set of Seven Dwarfs-themed travel supplies (seven things, each with a different dwarf on the box), which was nice. 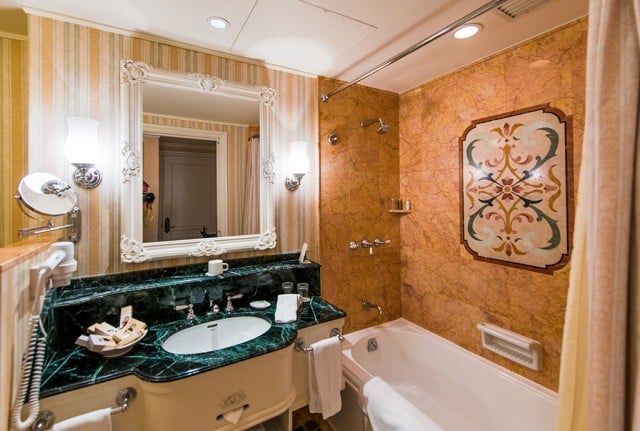 The furniture, specifically the bedposts (which look identical to the old Disneyland Hotel ones), dresser, and table all seemed very basic. 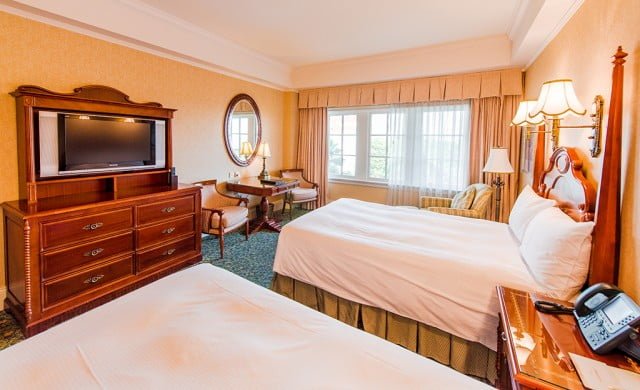 In fairness, the room looked nice overall and we both liked it, but it still didn’t feel luxurious. Maybe it’s not meant to, I don’t know. Based on the rest of the hotel, I think it is. It’s also quite possible that being in the business of catering to families with kids rather than business travelers or couples, it’s not practical for Disney to include certain amenities or designs that might get easily trashed.

If that’s the case, then the rooms here are certainly a good compromise between luxury and themed accommodations for families. Personally, I think Disney would be well served recruiting someone in charge of room design for Hyatt, Hilton, or a boutique luxury brand to help them work at better striking this balance. 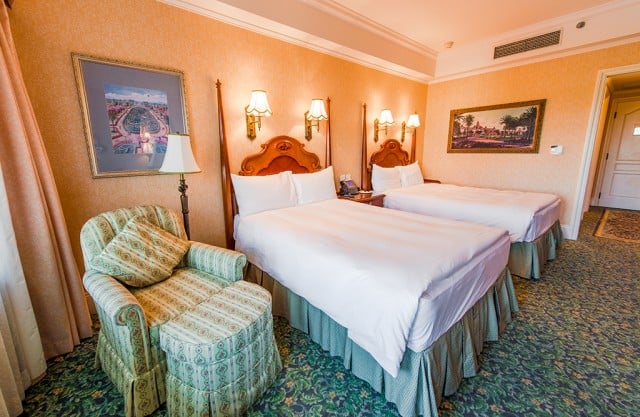 Outside of the rooms, Hong Kong Disneyland Hotel is a world class hotel. The grounds are beautiful, the amenities are nice, and the hotel executes the Victorian theme wonderfully. The upkeep and the Cast Members at the hotel are also great, surpassing most US Disney hotels in both regards. The price is on the high side, but considering that most guests are only going to spend 2-3 nights here at most (if visiting central Hong Kong as well, you’re best off switching hotels for that portion of your trip) and its proximity to the park as well as the airport, it’s well worth the premium price.

What do you think of this Grand Floridian doppelgÃ¤nger? Have you ever stayed at the Hong Kong Disneyland Hotel? What did you think of it? Are you considering a stay here? Hearing from you is half the fun, so please share your comments and questions below!