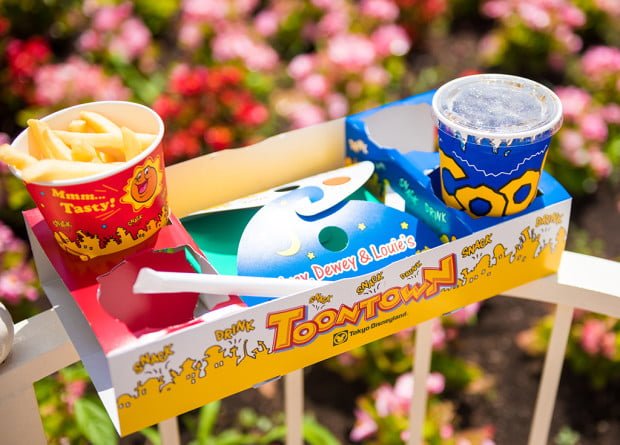 Huey, Dewey & Louie’s Good Time Cafe is a counter service restaurant in Toontown at Tokyo Disneyland serving sandwiches, pizza, and a few other sides with an outdoor seating area. This review features food photos, plus thoughts on the restaurant, and the ever-important topic of restaurant-specific packaging.

In some Disney circles, “never eat in Tomorrowland” is an adage. With few exceptions, this is good advice that holds true almost everywhere around the world. There is no such adage for Toontown, probably because most fans would never consider eating there in the first place. The food in Disneyland’s Toontown seems like an afterthought giving something to families who are “stuck” in Toontown because their kids want to play there.

The idea is undoubtedly the same in Tokyo Disneyland, where I’d suspect the prime demographic of guests “choosing” to dine at Huey, Dewey & Louie’s Good Time Cafe are basing their decision upon proximity. Aside from corn pizza aficionados and Disney ephemera collectors, I don’t see many other groups clamoring for a meal in Toontown.

So, if you don’t fit into any of those categories, is Huey, Dewey & Louie’s Good Time Cafe worth visiting? Let’s take a look… 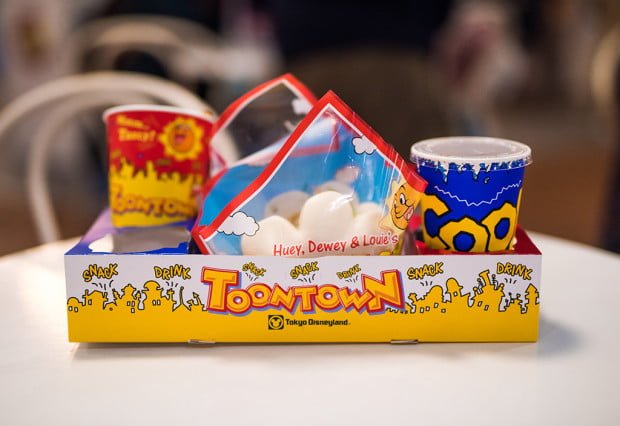 Before we get to the food, we’ve gotta start with this packaging. For me, the little things like this matter, and I really miss the restaurant and park-specific napkins, cups, etc. that Walt Disney World used in the 1990s and earlier. You could argue that “it’s just napkins, it doesn’t matter,” and in a myopic sense, I suppose that’s true.

However, I’d argue that it absolutely does matter. The attention to detail and going above & beyond are exactly what makes Disney Disney. No one is going to have their vacation ruined because a napkin doesn’t say the name of the restaurant at which they’re dining, but these “little” things add up. 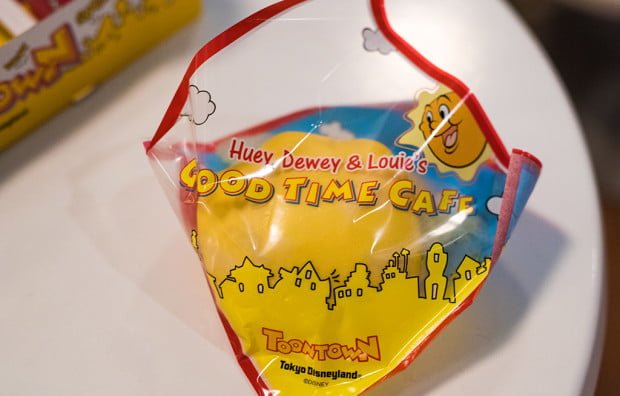 Part of the reason I have grown to love the Disney parks is because they make an effort when it “doesn’t matter.” The parks feature meticulous attention to detail, some of which will be lost on the vast majority of guests. That restaurant-specific logo on a single cup may not move the needle by itself, but in the grand scheme of things, it and little details like it do make a difference. Even if only subconsciously, guests recognize and appreciate this.

This is why it irks me when people dismiss complaints about Disney cutting corners. Sure, when viewed in isolation, it might seem absurd to be upset that park-specific food packing has disappeared. However, it’s more about the trend that represents, and the fact that if people don’t speak up about the “little” things, the details, which collectively do make a difference, will be lost forever. 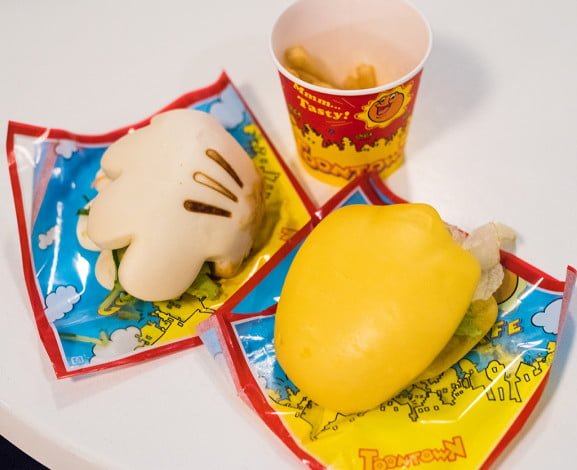 Oh, and you better believe a few of these wrappers have come home with me. Yeah, I save food wrappers from theme parks in foreign countries. I will proudly admit that.

Stepping off my soapbox, we should probably discuss the food…which is the main reason most people visit restaurants. (Or so I’m told. I’m my world, it’s for the packaging!) 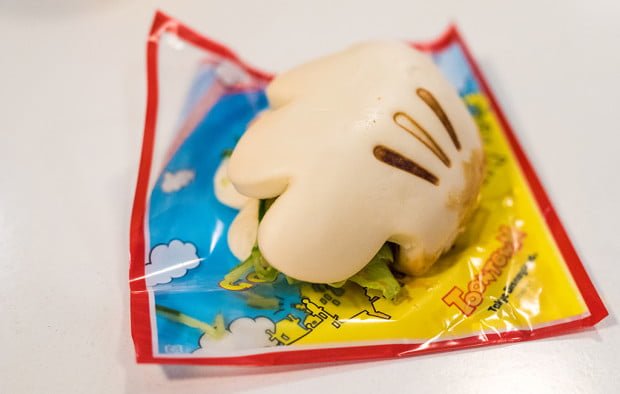 The food here is okay. Like many Tokyo Disneyland restaurants, the menu changes seasonally, but the 3 items that we’ll discuss are pretty consistently on the menu. First up is this Mickey “Handwich.” (I wish I could take credit for that name, but that distinction goes to Honorable Rat.)

The chicken to bun ratio on the Mickey Handwich isn’t good–it’s a pretty small amount of meat–but the few bites you’ll have of meat plus bun are flavorful. It also helps that the Chinese bun tastes good on its own, so you’re not just throwing away half the breading here like you might otherwise. 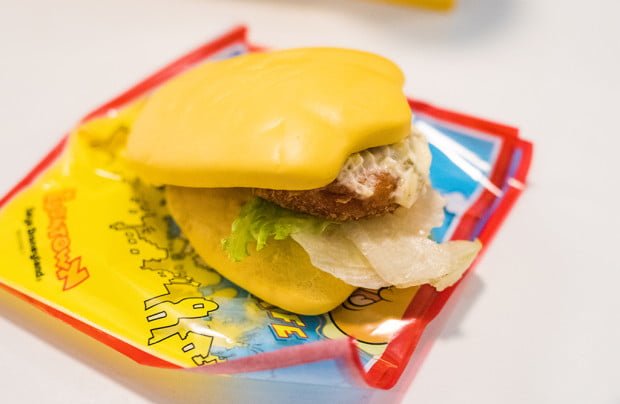 Donald’s Burger (with shrimp cutlet) has the same issue. The cutlet is small and there’s far more breading. Fortunately, bun has a compelling flavor itself, so you’ll eat the entire thing regardless.

For those who have never had a Chinese bun, I’m probably the worst person to explain this, but these “bao” are made by steaming yeast rather than baking it, which I guess makes the bread soft and squishy(?). It’s sort of like sweet, tender rubber. (See, I told you my explanation would be awful.) In any case, the bao tastes good by itself and makes for ridiculously good sandwiches. 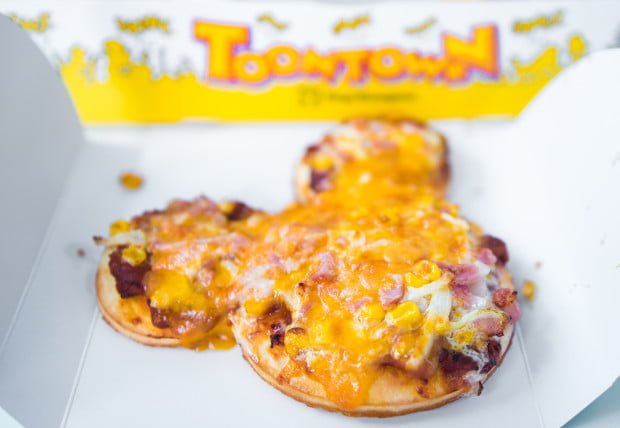 While the sandwiches are only decent, the Mickey Pizza is a delicious, albeit guilty, indulgence. I’m guessing most people have never had corn pizza–I hadn’t until this. As odd as corn, ham, and cheese might sound together, it was wonderful. The crust reminds me a bit too much of cardboard almost-pizza, but the toppings more than make up for it. If you’re stopping for a meal (or snack) in Toontown, this is my pick. 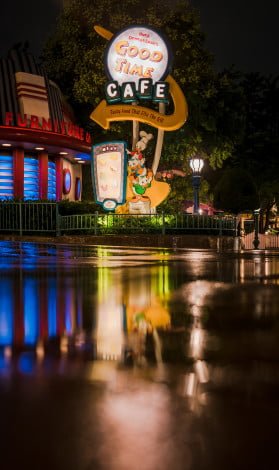 Overall, Huey, Dewey & Louie’s Good Time Cafe is compelling option–but for a hearty snack, rather than a full meal. At under $5 each, I think a case can be made for the pizza and sandwiches for a quick grab and go snack. For a meal, there are so many better counter service options around Tokyo Disneyland. I can’t recommend this spot unless you’re a family in the midst of a meal-time meltdown or you are an avid collector of Disney restaurant ephemera (in which case, keep fighting the good fight!).

Do you agree or disagree with our take on Huey, Dewey & Louie’s Good Time Cafe? Are you a fan of restaurant-specific packaging, or do you think it doesn’t matter? Do you avoid eating in Toontown? Share any questions, tips, or additional thoughts you have in the comments!