We recently shared that the popular rumor that Journey into Imagination will receive an extensive overhaul is making the rounds again. As of May 2017, it’s unclear when the refurbishment will actually occur, if at all. In our 8 Huge Epcot Rumors post, Figment is barely a blip on the radar–ranking #8 in terms of likelihood.

In the past, there have been signals that something big is potentially in store for the Imagination pavilion, the only questions are “when?” and “what?” That’s unclear at this point, but the downtime was originally rumored to be for almost an entire year, but was derailed when Disney instead decided to add Frozen Ever After to Norway. It now seems possible that an overhaul of Journey into Imagination won’t occur until 2020 or later.

Whenever a pavilion at Epcot is expected to have significant downtime, there is always the understandable concern that the downtime is actually Walt Disney World’s way of quietly killing the attractions inside. Fans have witnessed this happen too many times to be completely trusting of the “refurbishment” designation for a pavilion that is only moderately popular. For a number of reasons, I highly doubt that’s what’s going to happen here, but the concerns are still valid.

What follows is the original post from a few years ago when the rumors were pointing to this overhaul being confirmed, and funding greenlit. As mentioned above, this did not occur–and it’s possible it won’t for a while now. Still, I’m preserving this for historical posterity…

Let’s start out with the elephant in the room. Dreamfinder. I think it goes without saying that it’s the wish of every fan who yearns for a return of EPCOT Center, its vision, and mission, to have Dreamfinder make a return, along with a return to form of Figment.

Since this should go without saying, it should also go without saying that I feel the same way. That said, I am prepared for Figment to vanish completely. Before you bust out the pitchforks and accuse me of betraying my favorite character, at least read my rationale.

Yes, Figment is my favorite Disney character. Always will be. This is not because of what he is today, but because of what he was up until the late 1990s. Figment is not the same character now that he was then, and witnessing how Disney has treated the character since his glory years has worn on me. I can’t bear to see the characters mistreated any longer. If the plans for overhauling Journey into Imagination include Figment just for the sake of including Figment, and there isn’t a top-notch concept for him or he isn’t going to embody the childlike sense of wonder (without being grating), I’d just assume he join Dreamfinder in the great Dreamcatcher in the sky. I’ll always have the memories.

Besides, I think a better attraction is possible. Walt Disney Imagineering is one of the greatest creative organizations in the world (if you’ve lost faith in this, just look at Cars Land and Tokyo DisneySea) and they shouldn’t be handcuffed by guests’ sense of nostalgia. If given the financial resources, I know the creative minds there have the ability to make something superior to the original Journey into Imagination.

I also don’t want to see Phineas and Ferb infest the Imagination pavilion. I’ve heard plenty of people say that these characters perfectly demonstrate the sense of imagination, and would be a perfect fit for the pavilion. I don’t care. I’ll admit that I’ve never seen their show, but I have seen enough of their “presence” to think that they’re a bad fit. They are loud and obnoxious. The Imagination pavilion should be about the beauty and mystique of imagination. It shouldn’t be clumsy and loud. Moreover, they’re on a television show that undoubtedly has a shelf life. There’s nothing timeless about the characters or their animation, and I can’t help but think that if they invade the Imagination pavilion, no matter how popular their attraction is initially with kids, there will inevitably be a precipitous drop-off in a few years.

When mentioning Phineas and Ferb, it’s worth noting that the current “rumors” of them being added to the pavilion don’t have much basis in “insider information.” Rather, the rumors have snowballed from a lot of fans saying, “that might be a good idea.” I first saw this mentioned years ago, and since it has slowly morphed from “that might be a good idea” to “WDI is planning this for the Imagination pavilion.” The Disney fan community is like a bad game of telephone…just remember that when reading any rumors or “news” that isn’t coming directly from Disney. (Even then, Disney follows through on only about 75% of what it officially announces, so don’t put too much stock in official announcements until you see it with your own eyes!)

So, what do I want? I’m not entirely sure. I wouldn’t mind seeing the Pixar-ification of the attraction. This is another spot where you EPCOT Center fans are probably yelling, “TRAITOR!” at their computer screens, but hear me out. Pixar’s Inside Out hits theaters in 2015, and takes place in the mind of a young girl, with her emotions physically represented in the film’s characters. Sound like a familiar concept?

I realize this movie isn’t even out, and I realize there are complaints about Pixar in Future World. I don’t care. This film is an original concept from Pixar that sounds fairly similar to the concept of the original Journey into Imagination; if so, that would make it a perfect fit. While it could be an awful film, if there’s one studio I’d bet the farm on when working with original concepts, it’s Pixar. If an excellent Figment/Dreamfinder attraction isn’t possible for whatever reason, this becomes my first pick.

If it’s not Figment, it’s likely going to be something else based on Disney IP, so it might as well be a property that closely fits. EPCOT Center fans are delusional if they think the current Disney would rebuild Future World without a good amount of Disney IP. That’s just a practical reality. I think bringing Pixar into the fold guarantees that some of the “big dogs” at Pixar will take an interest in the attraction, and ensure that it receives sufficient funding to achieve the type of mesmerizing attraction worthy of being found in the Imagination pavilion. 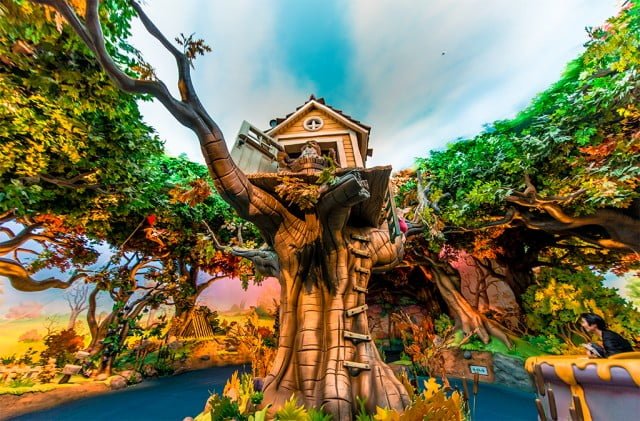 Speaking of mesmerizing attractions, there’s been a lot of talk about a trackless ride system, a la Pooh’s Hunny Hunt in Tokyo Disneyland, being used in the next version of Journey into Imagination. I think that’s purely wishful thinking. It’s unlikely that such a ride system could be retro-fit in a year or so, plus there’s the question of money. The wishful thinking is for good reason, though. While a ride system by itself absolutely does not make a ride (something SeaWorld is likely now realizing), it absolutely can be a significant part of the experience.

When we first rode Pooh’s Hunny Hunt, my sense of wonder (as corny as this sounds) was absolutely captivated. Not only were the visuals outside the ride vehicle amazing, but the way the honey pot ride vehicle made guests a part of the experience was nothing short of amazing. It was as immersive as a ride system can be–our generation’s version of the flying pirate ships in Peter Pan’s Flight.

A version of Journey into Imagination using this ride system would be able to draw guests further into the experience, with the ride system further sparking their imaginations and senses of awe. The one-two punch of the storytelling outside the ride vehicles and the storytelling via the ride vehicles would be the perfect combination to make the attraction a true journey into imagination.

This brings me to my ideal Journey into Imagination attraction. It would involve an updated (but not modern) Dreamfinder alongside Figment. The premise would be familiar (although I don’t care whether it’s the one of the first, a “something has gone wrong, now we need to collect bits of imagination,” or something different entirely), but the environments would be totally different, taking place in the surreal worlds of the human imagination, with small nods to the sets of the original attraction. Concepts from the original would be included, but in the form of visits to the minds of scientists, artists, etc., with the concepts being showcased in the abstract landscape of the imagination of each such mind.

Of course, I’m not a creative. I’m sure I’d be elated with any concept the Imagineers cook up for Journey into Imagination that is thoughtful, creative, and ambitious, and restores Figment and Dreamfinder, in all of their glory, to the attraction.

As for the rest of the Imagination pavilion, I’d love to see the return of the upstairs ImageWorks and a new 3D film that stars Dreamfinder and Figment. In my ideal world, the refurbishment would include both things, but I think at this point, that’s just getting greedy!

I guess we won’t truly know what’s planned until Disney announces something, and even then, we won’t know whether that something is any good (although I’m sure there will be plenty of speculating!) until the attraction reopens. In the meantime, we can take a trip in our time-traveling Dreamcatcher and look back at the original…

What do you expect from this Journey into Imagination refurbishment? What would you like to see happen in an ideal world? Share your thoughts in the comments!

98 Responses to “Journey into Imagination Refurbishment”