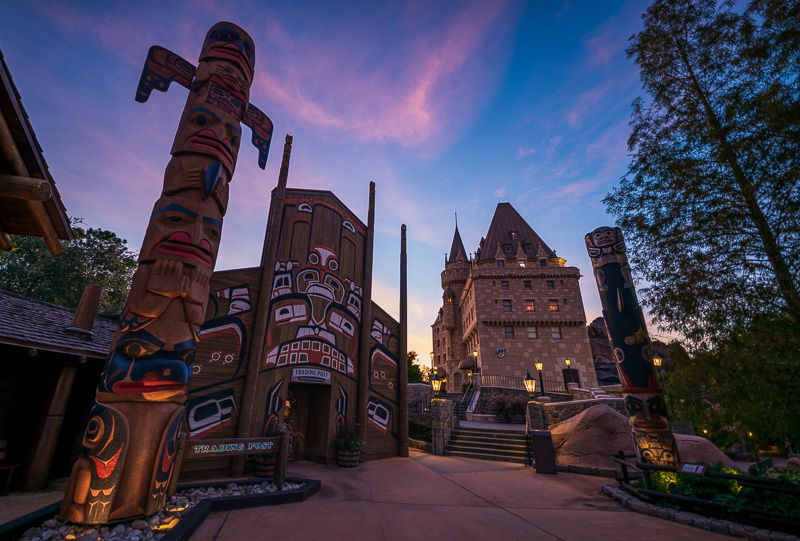 Le Cellier is a popular steakhouse in the Canada pavilion of World Showcase at Epcot, with a fan following. This dining review looks at whether it’s one of Walt Disney World’s best restaurants or if it fails to live up to the hype. We’ll also share food photos from our various meals here and perspective on value for money. (Updated June 28, 2022.)

For a long time, Le Cellier was one of our go-to restaurants–we ate there at least once per trip. However, that more or less ended when it became a Signature Restaurant for both lunch and dinner several years ago. We aren’t the only ones who think Le Cellier is overrated, which is quite the shift from about a decade ago when Le Cellier was the darling of the Disney fan community and one of the hottest restaurants at Walt Disney World. After years of being down on Le Cellier, we revisited it in Summer 2022…

We were pleasantly surprised by our experience, which confirmed that Le Cellier is still a good restaurant. It’s not one of the best in Walt Disney World, and whether it’s Signature caliber is probably is a matter of perspective. As far as cuisine goes, my biggest issue with Le Cellier is that I think the food, especially the steaks, is often over-salted and over-buttered.

This isn’t always an issue, but it sometimes happens. That is enough to knock it down a rung for me. Beyond that, the food is generally good, it’s just not as good as other Signature Restaurants–nor is the overall experience. I have only a few interior photos of Le Cellier because it’s almost always crowded, cramped, and loud in here. This wouldn’t be a huge surprise if it were a character dining experience, but this is a Signature Restaurant. To each their own, but it’s not quite the vibe we want when dropping $150+ for two people. 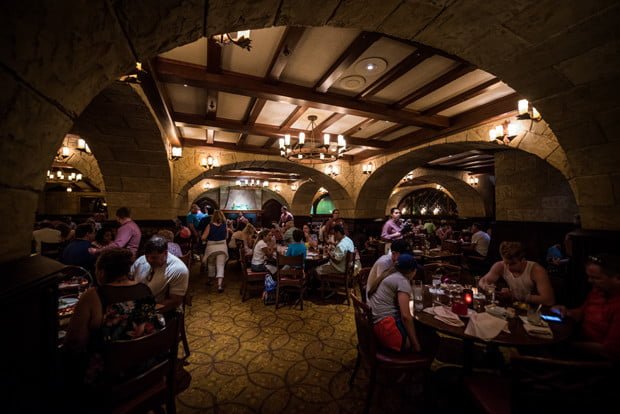 As far as theme goes, Le Cellier feels like a steakhouse you’d find in Canada. While the lighting and decor of the restaurant are fabulous, the spacing of the tables leaves a bit to be desired–but it’s not as bad in Le Cellier as in other restaurants.

It’s also nice that Le Cellier’s theming isn’t simply a caricature of Canada. It doesn’t feel like a rustic lodge, there aren’t antlers in all of the decorating, and the carpet isn’t red and black flannel. 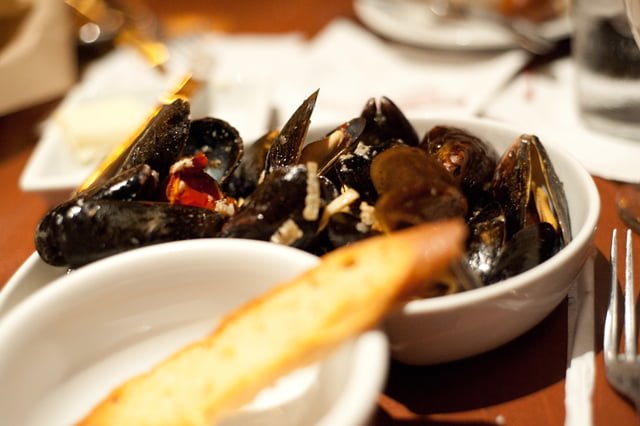 Being overrated is relative, and my stance is that in comparison to its actual quality, the popular opinion of it (at least as expressed in the Disney online community), and more importantly, the restaurant’s pricing, is a little too high. People gush over Le Cellier (albeit not as many as used to) and it’s the restaurant I most frequently see ranked among Walt Disney World’s, but for me it just doesn’t live up to the hype, all things considered.

It is a good restaurant, no doubt, and the service is great, but there are some better restaurants at Walt Disney World, especially at Le Cellier’s price points. I think a big part of Le Cellier’s reputation is premised upon the value it used to offer on the Disney Dining Plan. (Even though the Disney Dining Plan is currently unavailable, it’s discussed here because its presence looms large over Le Cellier and how the restaurant has “evolved” over the last decade-plus.) 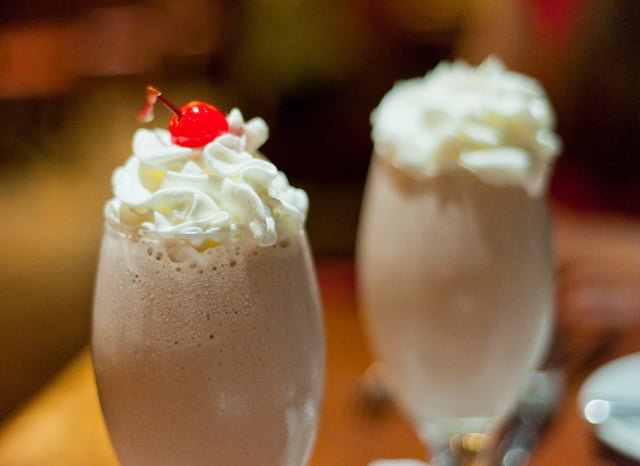 Le Cellier used to be a great value on the Disney Dining Plan, and an incredibly difficult Advance Dining Reservation to land. Much of its reputation was predicated upon these facts, and it retains some popularity as a result of that.

However, changes to the Disney Dining Plan and price increases at Le Cellier have decreased its relative value, and without that value, there’s really no reason to rank it so highly. There are at least 10 restaurants at Walt Disney World that are better than Le Cellier–probably more like 15-20, actually. 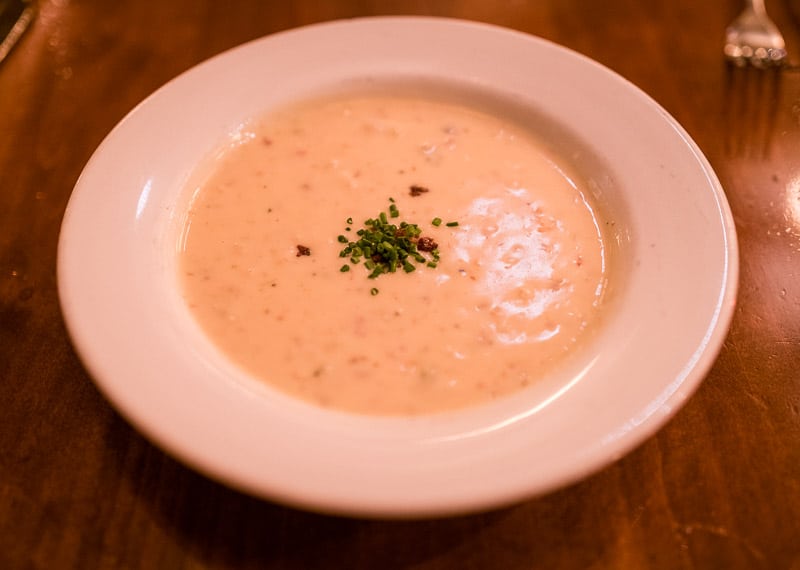 In terms of restaurants in World Showcase, Takumi-Tei and Monsieur Paul are both better on the high end. As compared to Signature steak spots that are convenient to Epcot, both Topolino’s Terrace and Yachtsman Steakhouse both surpass Le Cellier.

This is not to say that Le Cellier is bad. It’s still a very good restaurant, and has great options for appetizers (the Canadian Cheddar Cheese Soup is universally loved), entrees, and desserts. Beyond that, Le Cellier is a beer-lover’s paradise with several great options from Unibroue. 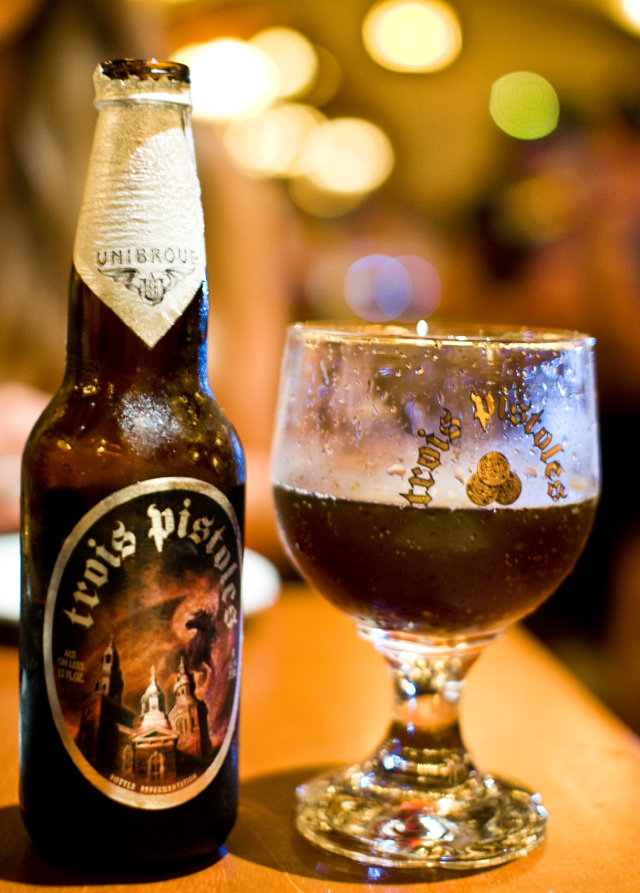 Our Le Cellier servers have always been exceptional and very knowledgeable regarding the different entrees. It’s nice to have servers who are actually willing to make a recommendation instead of indecisively saying “they’re all good.”

One one occasion, our server offered descriptions of the beers that actually persuaded us to each try one, when initially we were unsure of whether any of them sounded good. He really was a great salesman for the restaurant. I had the Trois Pistoles and Sarah had the Blanche de Chambly; mine was a darker, heavy beer yet one with fruity and spicy tastes, Sarah’s was a lighter, hopsy and somewhat lemon or orange beer. 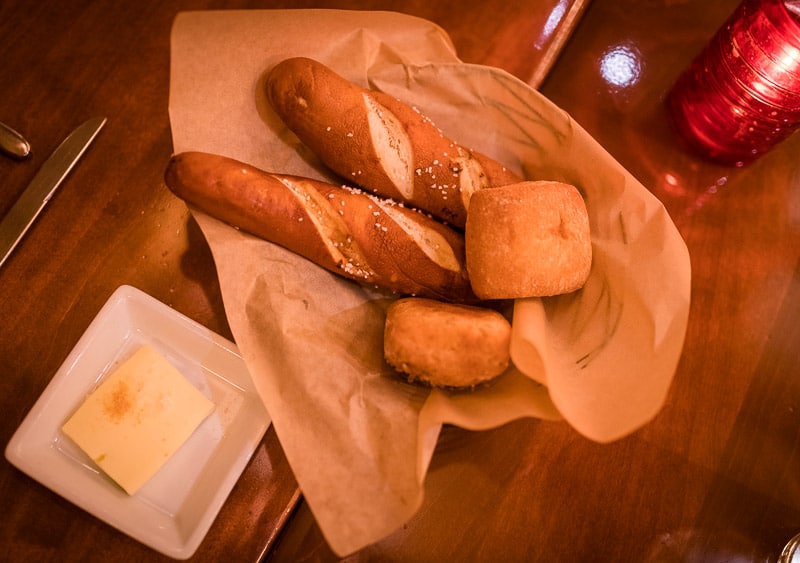 Unibroue has become one of our favorite breweries since first trying it at Le Cellier many moons ago. (It’s also now served outside of the restaurant at the beer stand and is our top pick for Drinking Around the World at Epcot.) 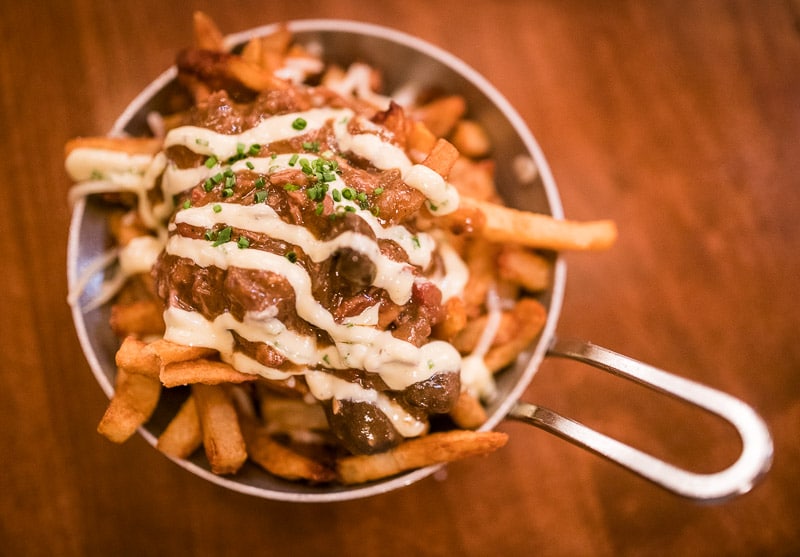 Both of these are good options for a shareable starter, especially if you’re worried about leaving hungry. They’re delicious and decadent, but I wouldn’t call them must-order dishes. Definitely higher quality than the poutine served at nearby Refreshment Port…but that indulgent snack is shockingly good. 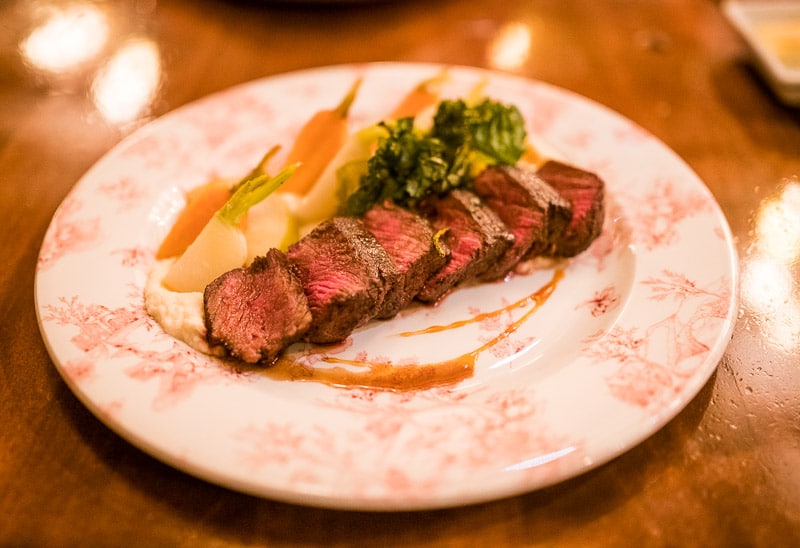 One menu staple at Le Cellier is the Bison Strip Loin. Accompaniments change seasonally, but mine was served with Celery Root Purée, Butter-braised Carrots and Turnips, Roasted Apples, Cider Reduction, and Seasonal Greens.

In the past, there was a version with truffle béarnaise sauce. To each their own, but I preferred that. Bison is a lean and earthy meat, and typically doesn’t have the same robust and fatty flavor of beef. It’s still fantastic 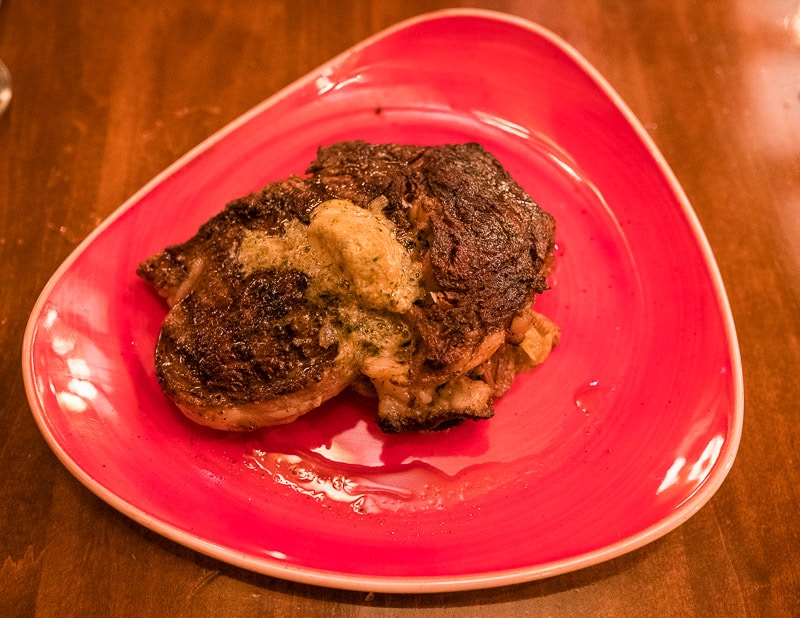 Although it’s a Canadian steakhouse, many of the meats served at Le Cellier are USDA Prime. This is one definite made since going Signature, as the cuts at Le Cellier are now higher quality with better marbling, tenderness, and more flavor.

One such example of this is the Ribeye at Le Cellier. It’s not quite as good as the one served at Yachtsman Steakhouse, but it delivers. This ribeye perfectly melds meatiness with fattiness, great texture, and a bit of char. 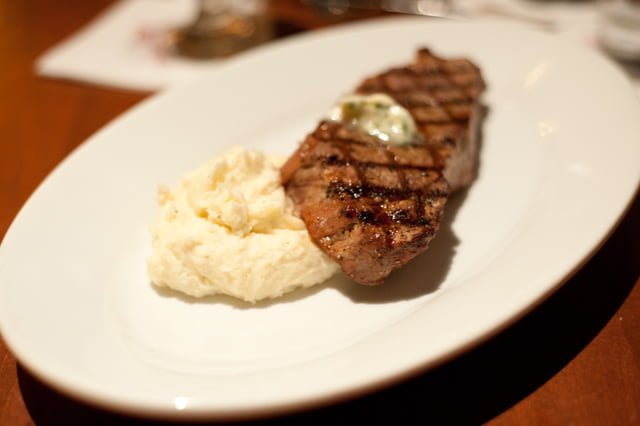 While we have sample a variety of entrees at Le Cellier, the one I keep coming back to is the New York Strip Steak. I am always tempted by the filet, especially with those mushrooms, but the larger, slightly more marbled cut is more up my alley.

I really like the taste of a good NY Strip, especially the USDA Prime cut. Le Cellier never disappoints here. I enjoy a good filet mignon, too, but I’ll take the size combined with the taste of a strip over a filet most any day. 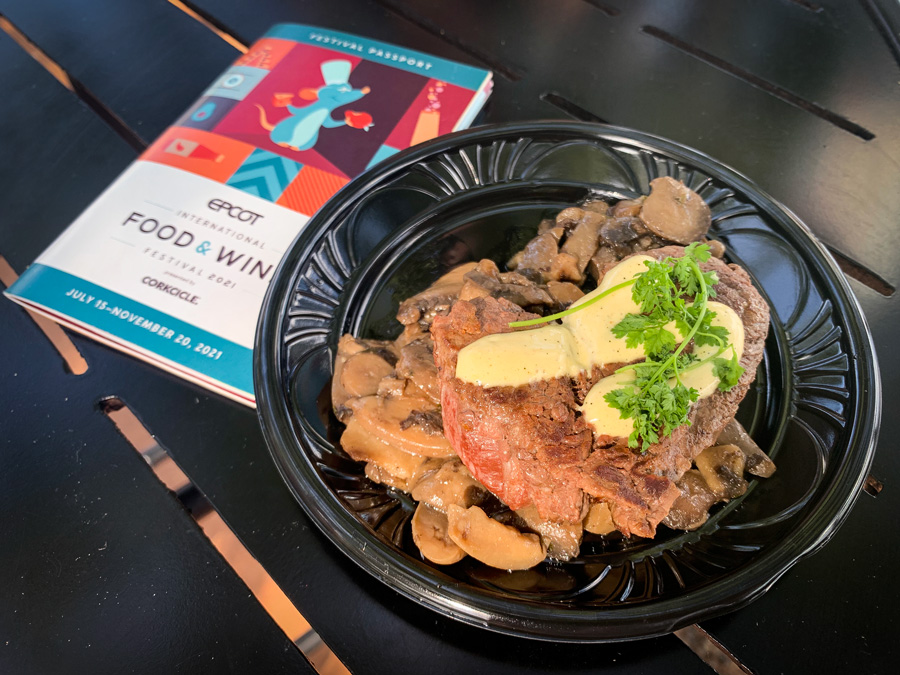 There’s also the fact that the Le Cellier Signature Filet Mignon is a mainstay of the menu at the EPCOT Food & Wine Festival. Now, this isn’t the same size–and not the same quality cut of beef–but it’s good enough for me to get my fix.

I’ve become so accustomed to eating the Le Cellier Filet Mignon at Epcot’s Food & Wine Festival that it’s been years since I’ve had it at the actual restaurant. I should probably remedy that, but in the meantime, I can’t give a credible review of that particular cut. (I will say that there’s probably a reason it’s the steakhouse’s signature cut and the other AAA Canadian Tenderloins I’ve had have been fantastic.) 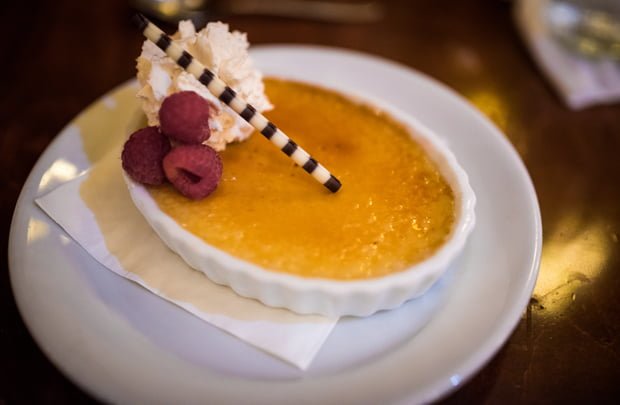 As far as desserts at Le Cellier go, my favorite is the Maple Créme Brulée.

This ranks right up there with the best desserts at Walt Disney World, in my opinion. 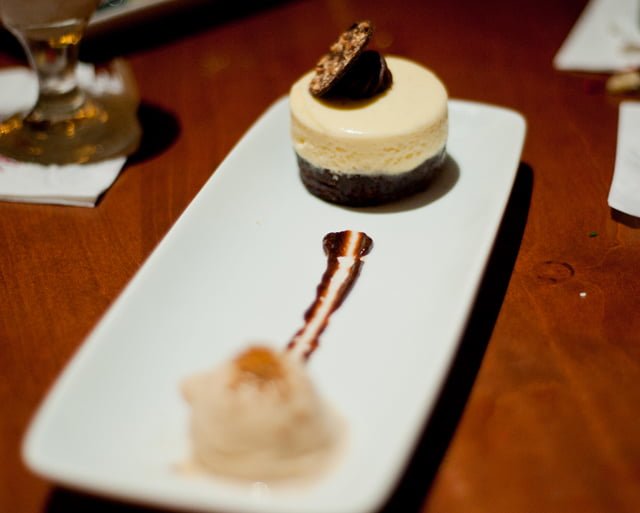 We’ve tried a variety of other desserts at Le Cellier, but once I discovered that Maple Créme Brulée, it’s the dessert I have always gotten since.

Based on our experience, you really can’t go wrong with any of the Le Cellier desserts. The dessert menu changes at Le Cellier, with one of the only constants being that Maple Créme Brulée (for good reason!). 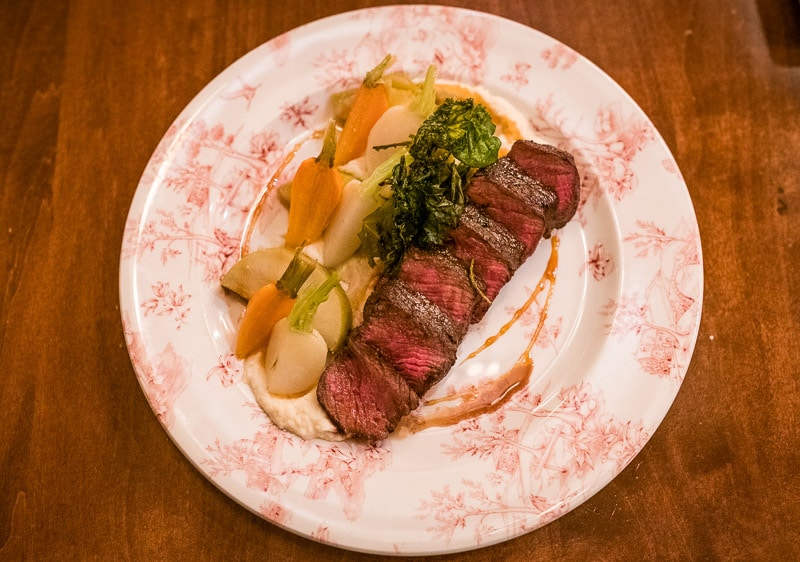 Overall, I think Le Cellier is a very good restaurant, but I think much of its reputation is built upon internet hype and scarcity of reservations. When Le Cellier became a full-time Signature Restaurant, that was probably the last straw for us of it losing its luster. If we’re on the Disney Dining Plan, it’s not better than other Signature Restaurants to justify using the credits, and if we’re paying out of pocket, the prices have been inflated such that’s also not worth it from that perspective. It’s definitely a solid restaurant, but I don’t think it compares with any of the Signature restaurants we’ve visited.