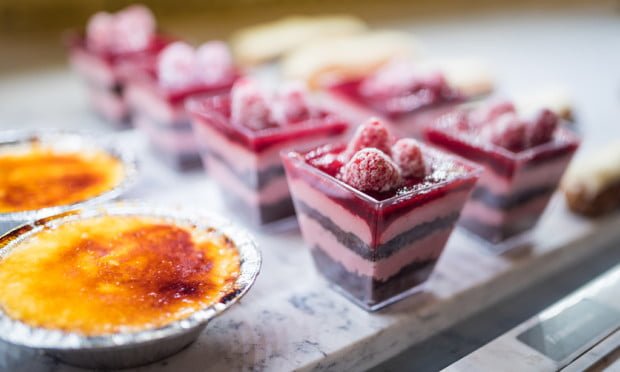 Les Halles Boulangerie-Patisserie is a counter service restaurant and bakery in Epcot’s France pavilion at Walt Disney World. This review features food photos of some of the decadent and savory options, our opinion of this spot, and our take on the best treats (and best uses of Disney Dining Plan snack credits) at Les Halles.

With mass hysteria surrounding the race to Frozen Ever After in the Norway pavilion for the foreseeable future, and the need to arrive at Epcot by (at least) 30 minutes prior to park opening if you don’t have a FastPass+ but still want to do the attraction, you might be wondering about where to get breakfast.

Well, Les Halles Boulangerie-Patisserie is one of the few options (along with Sunshine Seasons in The Land, and newcomers La Cantina de San Angel and Kringla Bakeri og Kafe). While Kringla and La Cantina are obviously a whole lot closer to the Frozen Ever After line, with 2 hour-plus waits, you’ll probably have the time to send a runner for pastries from France. On peak dates, wait times might be so high that you’ll have time to send a runner to the actual France.

Over the years, Les Halles (and Boulangerie Patisserie before) has become one of our go-to spots in Epcot. Thanks to our strict “desserts for breakfast” dining regimen on vacation (and because The Land is a madhouse in the morning, making our normal favorite, Sunshine Seasons, less appealing), we often grab something here early in the day.

Despite that, I don’t have any photos (that I can find) of the interior or seating area of Les Halles. That’s probably because the ordering area is totally utilitarian, with the goal being to move as many guests through the lines as possible. Likewise, the seating area is nothing noteworthy; there are a few French posters, but that’s about it.

Even in the hot months, we’d much rather eat out by the fountain or on secluded benches in the shade than inside. The inside is dark, usually loud, and thematically underwhelming. Les Halles is an incredibly popular spot, which is why it was expanded a few years ago, and the goal is certainly to churn through as many guests as possible.

For our review, we’ll start with the savory “restaurant” side of the menu and move to the reason most people will probably head to Les Halles: desserts. 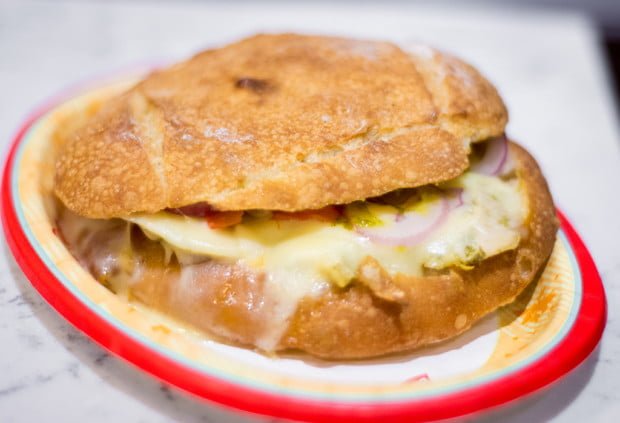 Here’s the outside of the Poulet au Pistou, sandwich… 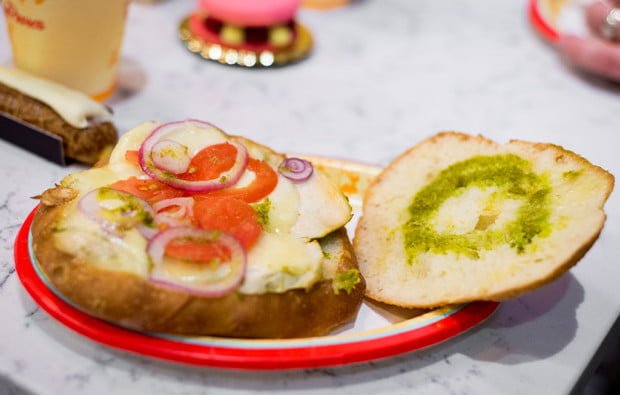 …and inside. This consists of pesto-coasted chicken, onions, and tomatoes, all formed together by a generous coating of cheese. On the savory side of things, this is a good option. It has a rich flavor without going over-board, but often is lacking in pesto (see above–maybe try asking for a little side container of pesto?). It’s also decently filling. 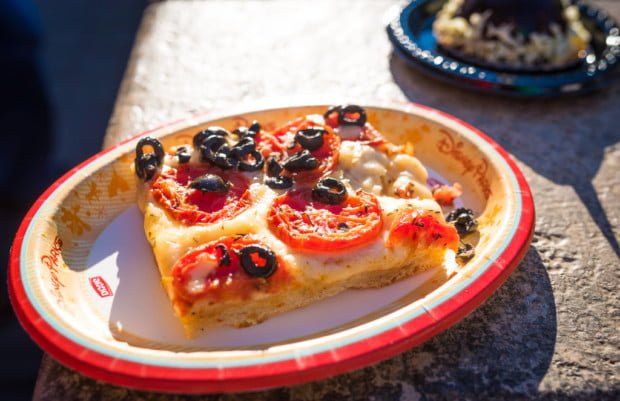 Then there’s Pissaladière, which is a super fancy way of saying “pizza.” It’s about what you’d expect, like a breadier, more seasoned version of pizza. We’ve haven’t had this in a while, but it’s a fairly good option, particularly if you want a snack that will tide you over for a couple of hours before a meal. 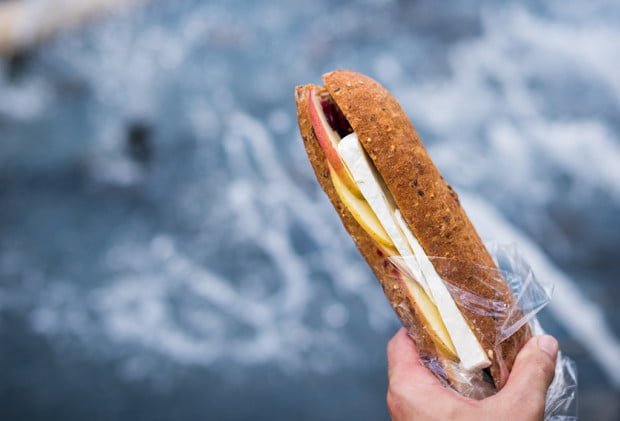 Here’s the Brie aux Pommes, which consists of brie (obviously), apples, and cranberries on multi-grain bread. They don’t exactly splurge on any of the ingredients here, making the cheese and apple to bread ratio unfavorable. If you take away a bit of the bread, the flavor is excellent, and the fruit adds a refreshing taste to the sandwich. For me, this is a one and done because I felt the value for money was pretty far off. 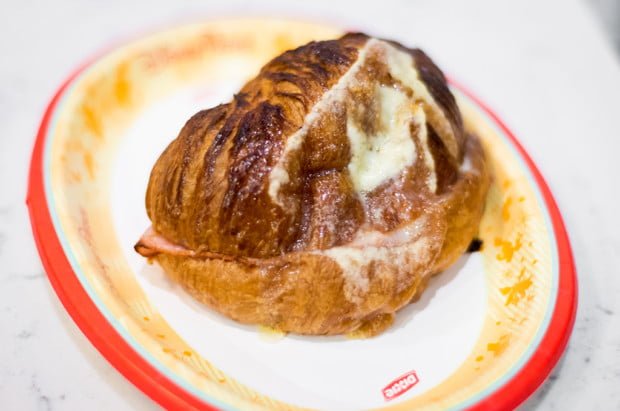 In start contrast to that is the Croissant Jambon Fromage, which is ham, cheese and béchamel in a croissant for roughly half (!) the price of the Brie aux Pommes, and a similar serving size. Can’t pinpoint that delicious flavor in this? It’s the zesty taste of actually getting a good deal at Walt Disney World! 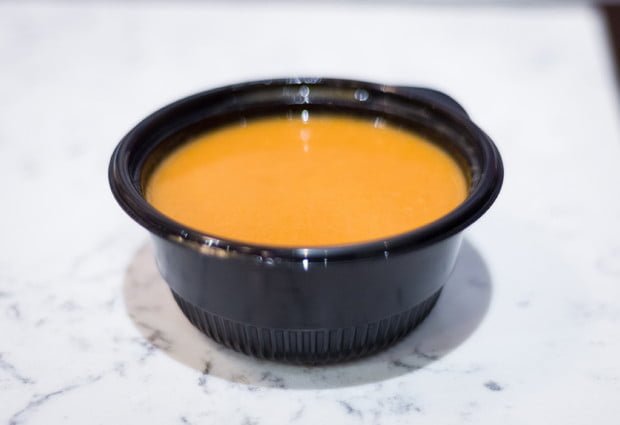 The Croissant Jambon Fromage aside, I’m not a huge fan of the entree menu at Les Halles. Granted, we haven’t tried everything, but it seems to us that there are better alternatives around World Showcase.

Now, possibly you don’t want to make multiple stops or aren’t Grazing Around the World Showcase (HERESY!). If that’s the case, we’d still recommend Les Halles because the dessert menu is so strong… 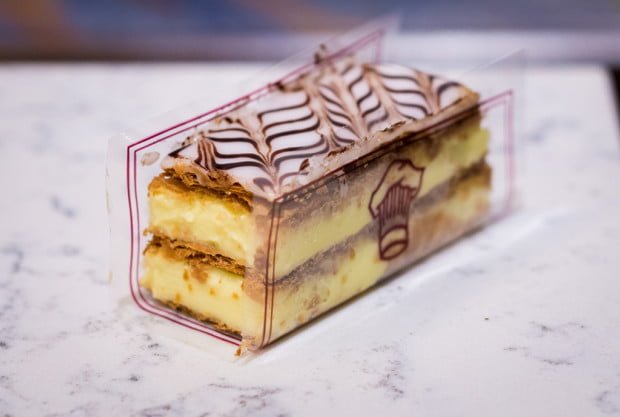 First up is the Napoleon, a French classic and one of my favorite items at the old incarnation of the bakery. Above is what it currently looks like. Below is how it used to look… 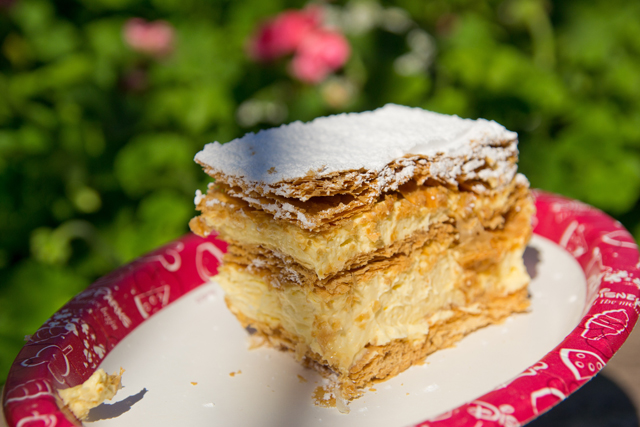 The old version was a testament to all that was good and pure in the world, and by far the best dessert at Boulangerie Patisserie. It was universally beloved by its fans, and even respected by its enemies. I don’t know why they tried to fix something that wasn’t broken, but the new one isn’t nearly as good.

I mention this in case you haven’t visited Walt Disney World in a few years and have fond memories of this pastry: don’t bother with the new version.

Fortunately, if you have way more talent than me, you can make the old version for yourself at home. 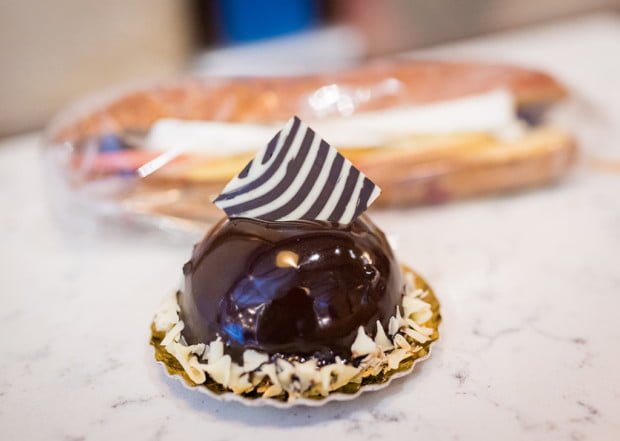 On an infinitely more positive note, many of the new desserts at Les Halles are good, and superior to much of what was there before.

This one is simply called “Duo,” which is a white and dark chocolate moussee cake. This excellent dessert features a name inspired by Dior and a chic to match. Fortunately, that’s where the similarities end, as this lacks the other hallmarks of Dior (overpriced, superficial, and promoting anorexia). Inside it has layers of white and dark moussee with a cake foundation, which collectively provides a balanced dessert that hits the right notes without being overly rich (we still split it). This ranks as one of my favorite desserts in Epcot. 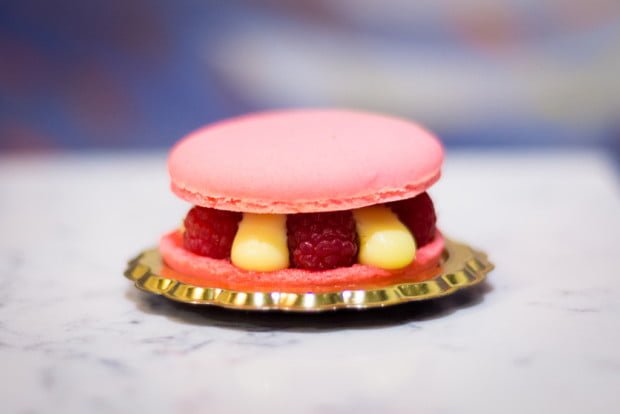 This is a macaron (or if you prefer, macaroon*). Excellent taste, I’ll admit. I’ve just had a difficult time jumping aboard the macaron train, because the things seem to be overpriced across the board. (And I mean everywhere, not just Disney.) I remember back in the day when cookies were a trendy snack, and you could get a large one for $.99. Nevermind me, though, I’ll just be over here yelling “GET OFF MY LAWN” at passing cars.

*For the grammar police (who thankfully read this blog as its lack of proofreading turned them off years ago) with too much time on their hands, there has been some uproar over differentiating between a macaroon and macaron. Even the Disney Parks Blog recently released a breakdown of the differences between two. Chart be damned, I’ll pioneer new ways to misspell and/or confuse the two. 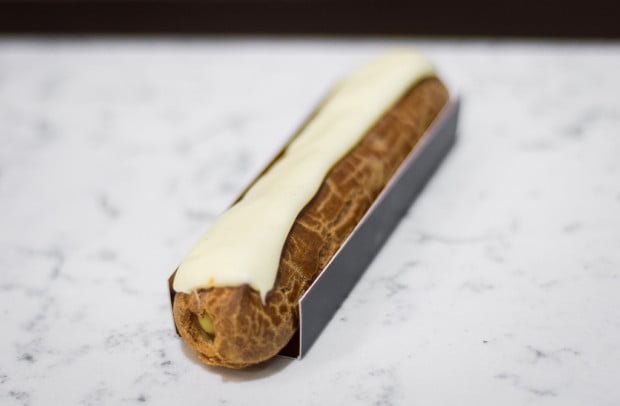 I feel like the eclair is the Dre of the the dessert scene at Les Halles. Everyone forgets about it, but it’s still there, being a badass. If the eclair here is not on your radar for whatever reason, it should be, as it’s one of the best snacks on a pretty stacked dessert menu. The presentation is a bit lacking as compared to some of the “designer” desserts, but the eclair is the ‘ole reliable. 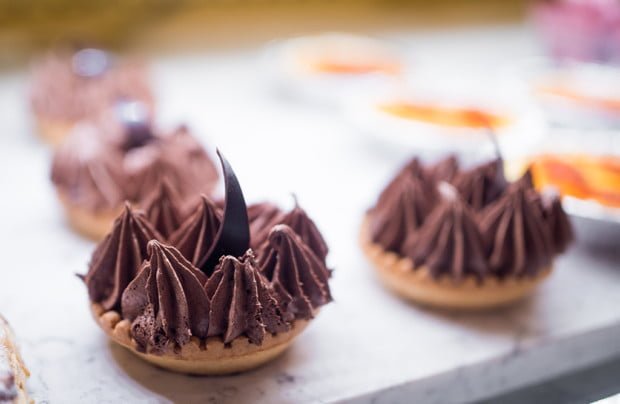 Overall, when you’re thinking of it in terms of the Best Bakeries at Walt Disney World, Les Halles Boulangerie-Patisserie is a can’t miss choice. We’ve only highlighted a few standout desserts above, but we have sampled numerous others over the years, and there have been far more hits than misses. The entree menu is not quite as strong, from our perspective, but there are a few workable choices on it if you’re “forced” to do a full meal here for whatever reason. Nonetheless, it’s best viewed as an exceptional bakery (and dined at accordingly for snacks) than a mediocre counter service restaurant.

Do you agree that Les Halles is one of the best bakeries at Walt Disney World? Any favorite desserts here? Favorite (or least favorite) entrees? Share your thoughts in the comments!