In terms of both ambiance and cuisine, Liberty Inn has been widely regarded as one of the worst counter service options at Walt Disney World, but it has been improving in recent years. In terms of ambiance, there isn’t really any, save for some flags on the walls and various pots and pans and other things that probably represent colonial America. During the Christmas season, there’s also a large gingerbread house in here that’s actually pretty cool. The indoor seating area here is huge and if it’s busy, it can get really loud in here since the seating is all in one room, cafeteria style. We prefer eating outside where there’s also plenty of seating whenever it’s busy.

We’ve dined at Liberty Inn more times than I care to admit. Once would be more times than I care to admit (the actual number, unfortunately, is higher than once). In our defense, we only go here when we’re with others who aren’t interested in unique dining options, or if we want to see the American Adventure, but have a bit of time to kill. It’s not that Liberty Inn has the worst food in Walt Disney World, it’s that the restaurant is an embarrassment to America. While other host countries offer unique and interesting cuisine (albeit not always authentic versions of it), the United States serves up burgers, hot dogs, and chicken nuggets. Seriously?! That’s the best we can do? Why not just make it a place to get Twinkies and call it a day?

This would be a great place to show off the diversity of American cuisine. Even though it’s a counter service restaurant, they could serve easy takes on regional favorites, like Philly cheesesteak sandwiches, New England clam chowder (or lobster rolls), Creole jambalaya (or gumbo), Memphis ribs, Texas BBQ, Denver omlettes, etc. The possibilities are endless, and a few of the items above are served at other counter service locations, so there is nothing logistically preventing at least some of these from happening. The current menu makes Americans look like fast food junkies, which we sort of are, but the rest of the World Showcase is about putting nations’ best faces forward, so why not do the same with American cuisine?

Fortunately, the menu here has improved in the last year or so–still not to the point that it’s a decent representation of America, but it is better. In fact, based upon looking at menus on various fan sites that have been updated at different points throughout 2013, it appears that they’ve tested several new items this year. Nothing that substantially deviates from the current formula, but definitely an improvement upon the menu when we first visited Liberty Inn in 2007 that was literally just burgers, hot dogs, chicken nuggets, and maybe a basic salad. 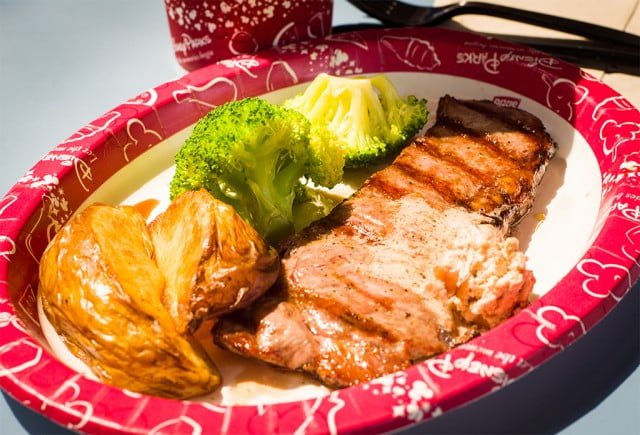 The standout now is the 6 oz New York Strip Steak. This steak is served with red wine butter, potatoes, and broccoli. When we got stuck eating here on EPCOT Center’s 30th anniversary last year, I decided to give this steak a try. At only around $10, my expectations weren’t high. However, for what it is, the steak actually isn’t half bad. It’s drenched in butter, is a bit over-salted, and mine was cooked medium (I couldn’t specify how I wanted it cooked), but I was still pleasantly surprised. I assume the butter and salt were to mask the otherwise mediocre cut of meat used, and there’s no denying that there was nothing special about the cut of meat. Still, it was good for counter service steak, and definitely exceeded my expectations for what a $10 steak at Walt Disney World would taste like. When we inevitably get stuck eating here again, this is what I’ll order if none of those other brilliant suggestions above (hint, hint ;)) make it to the menu before then. 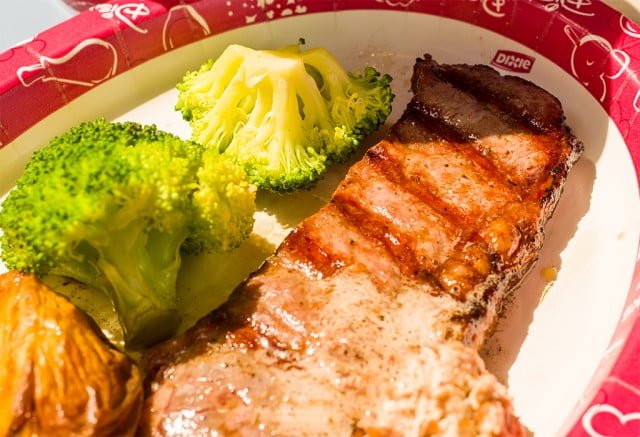 Another item that wasn’t too bad was the Grilled Chicken Flatbread. Sarah described it as being similar to the standard grilled chicken standard, except served on a pita and with some additional toppings. These toppings included Monterrey Jack cheese, bacon, lettuce, tomato, and red pepper aioli. She thought it was a bit dry, but the red pepper aioli provided decent flavor. I tried it and thought it was fine, but nothing memorable. 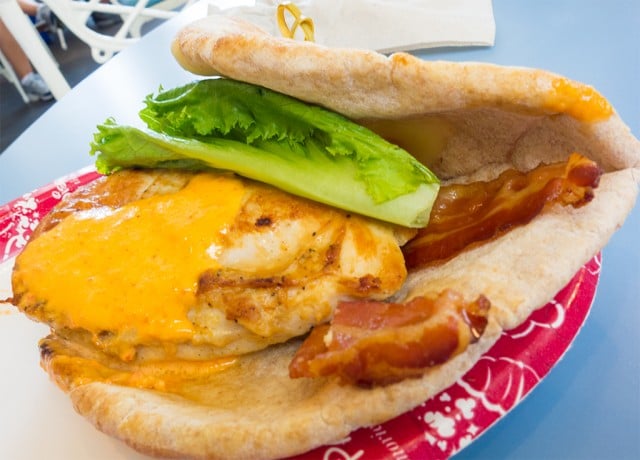 During our visits, there have been a couple varieties of the basic Disney burger with bacon here. It has tasted exactly like the basic Disney burger served all over the place at Walt Disney World. I’ve heard that, recently, Liberty Inn has been testing out a California Burger with avocado and pepper jack cheese on it. This sounds more promising than the basic bacon burger, but I haven’t heard any rave reviews of it. 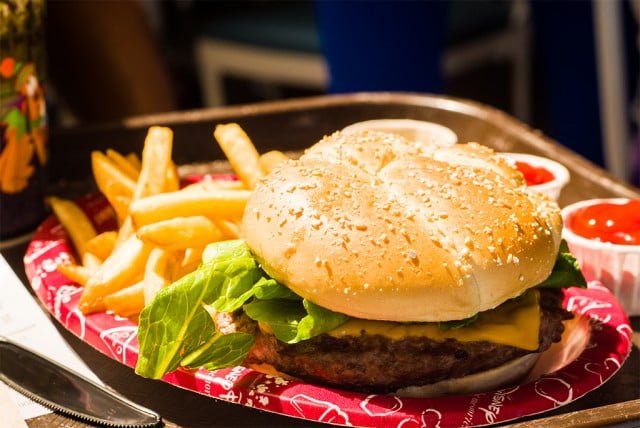 In terms of desserts, we like the Apple Pie here, but World Showcase has a lot of standout dessert snack options, and this isn’t in the same league with those. We’ve heard positive things about the Rocky Road Mousse Brownie, but we have yet to try it. Unless you count fruit (doing so would be distinctly unpatriotic), that’s it in terms of desserts here.

Overall, Liberty Inn catches our ire more than other generic counter service restaurants at Walt Disney World because it’s located in the World Showcase. Not that World Showcase counter service is especially strong, but Liberty Inn should strive to highlight what’s great about American cuisine, not serve as an indictment of our fast food culture. It’s no longer the worst restaurant in World Showcase, but it still leaves a lot to be desired both in terms of food and ambiance. Its menu has made improvements in recent years and it appears that Disney is still testing out new items to add, but it’s not there yet. Thanks to that recent effort and a couple of decent menu items, we won’t completely fail Liberty Inn, but it’s still in “D” territory for us.

If you’ve dined at Liberty Inn in the last few years, do you agree with us that it’s one of the elite counter service restaurants at Walt Disney World? What menu items here do you like? What do you plan on trying? Hearing from you is half the fun, so please share your thoughts in the comments!