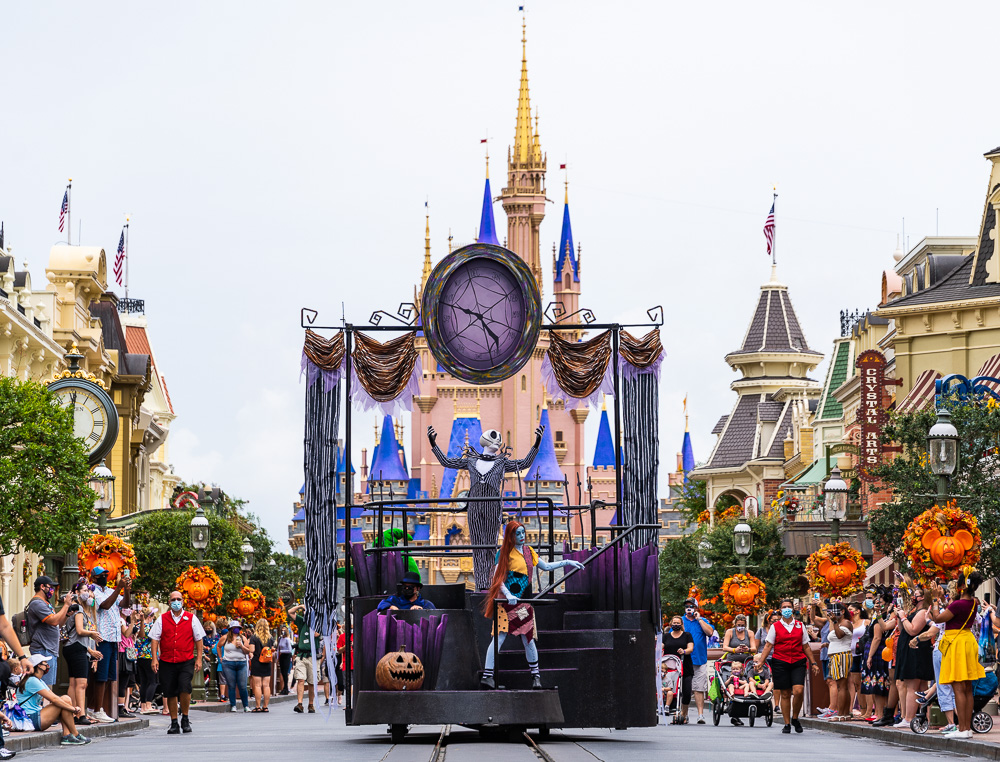 Halloween got a “late” start at Walt Disney World this year, kicking off in mid-September instead of the “normal” mid-August. We visited Magic Kingdom to see the park decked out in pumpkin decor, the new character cavalcades, and see whether it’s a trick or a treat. Here we’ll share photos, preliminary crowd & viewing advice, and more.

As you might recall, Walt Disney World cancelled the hard-ticketed Mickey’s Not So Scary Halloween Party this year. In its place, Halloween entertainment will be offered with seasonal foods available for purchase throughout the day at Magic Kingdom from September 15 to October 31, 2020.

Even before experiencing this, we knew it’d be good and bad. Obvious downsides are no fireworks, full parade, or nighttime operating hours. On the plus side, switching from a hard-ticketed event to being included in regular park admission meant not having to pay extra to experience Halloween at Walt Disney World. Now that the festivities have started, we have more insight into the good and bad of this approach. Let’s start out with the bad…

Unfortunately, decorations are relatively light this year with both the Main Street Pumpkin Festival and Pumpkin Citizens of Town Square absent. This means no pumpkins around the windows of Main Street with carving designs matching the businesses (e.g. hot dog carving at Casey’s) and no pumpkin scarecrows in the flower beds around the train station.

There’s also no fall floral Mickey Mouse greeting guests upon entering the turnstiles. Other more subtle pumpkins and seasonal flowers that appeared throughout the Central Plaza and other areas of Magic Kingdom are also not present this year. On the plus side, the most iconic Halloween decorations have been installed. 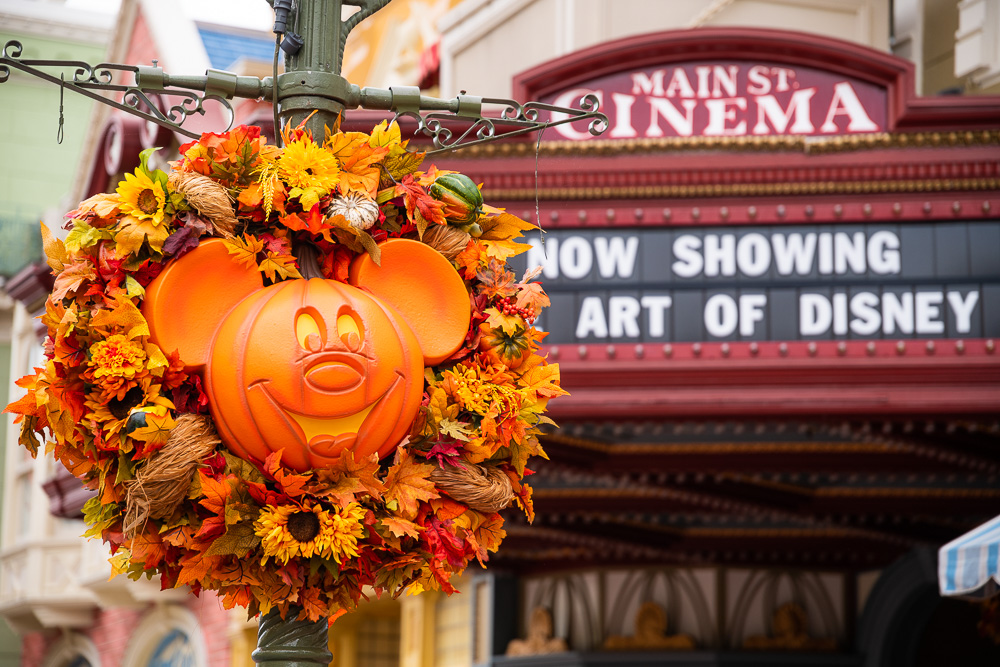 Those, of course, are the Mickey Mouse Head Pumpkin Wreaths that line the lampposts on Main Street USA and appear all around Cinderella Castle.

These are undeniably awesome, great backdrops for PSL photos (hopefully we all know what that means now 😉 ), and really clever pieces of decor. They do a nice job of making Main Street feel like fall, but they’re being asked to do some heavy-lifting this year. 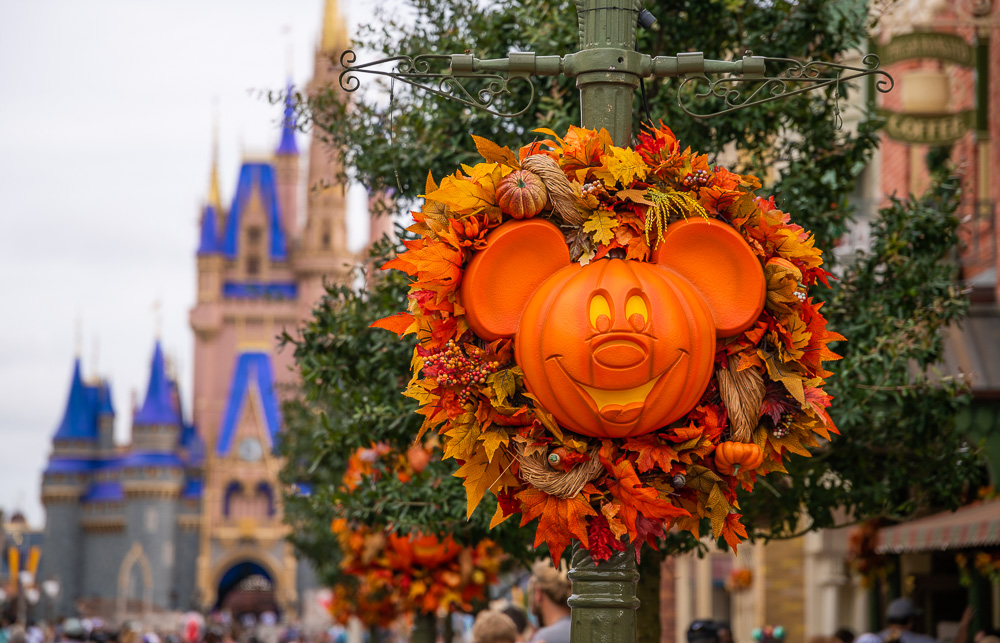 Too much heavy lifting, if you ask me.

In a normal year, Main Street truly feels like a pumpkin festival. From the Mickey floral prior to entering the tunnel to the Pumpkin Citizens of Town Square to the Main Street Pumpkin Festival, there’s layer upon layer of tasteful and perfectly on-theme decorations. 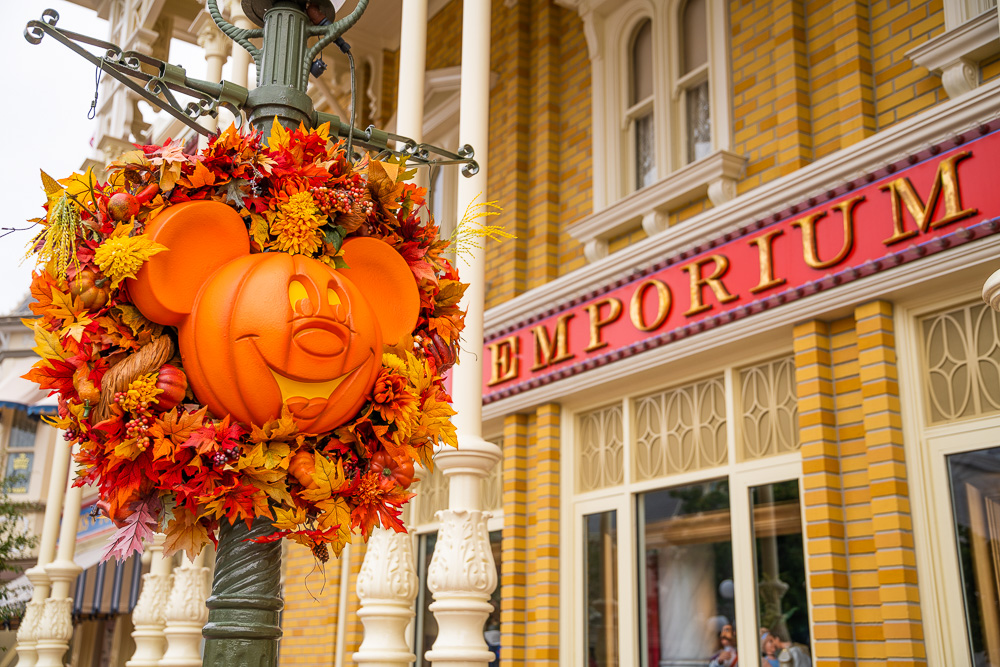 The culmination of that is something spooktacular, with the Mickey Mouse Head Pumpkin Wreaths being the cherry on top that ties everything together. (Or the proverbial whipped cream on the pumpkin pie, if you’d prefer.)

If you’ve visited Walt Disney World at Halloween, these Mickey jack-o’-lanterns are probably what sticks out in your memory, but they’re the highlight of a complete package–not the sole component. Without the rest of that package, it sort of falls flat. More like how Independence Day is celebrated with patriotic bunting. 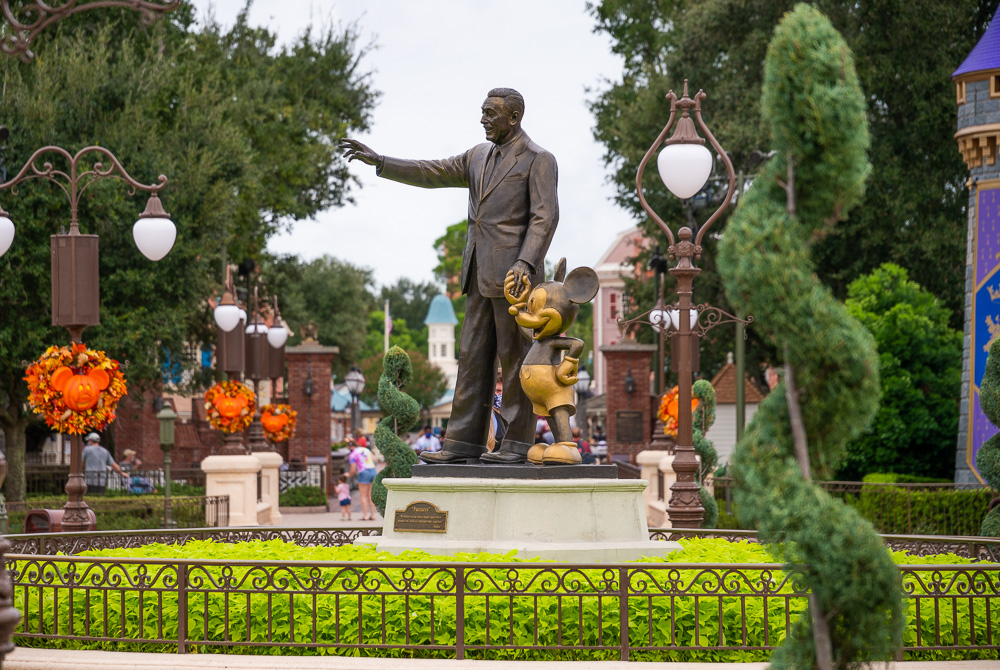 Now, you might be thinking that these are unprecedented times and we should cut Walt Disney World some slack. In the past few months, we have done that. However, as attendance and wait times increase, we’ll be less deferential to Disney’s financial woes.

It’s not like they’re charging less to enter the parks; there needs to be commensurate value for money, whether that’s in the form of reduced waits, lower crowds, or seasonal offerings. 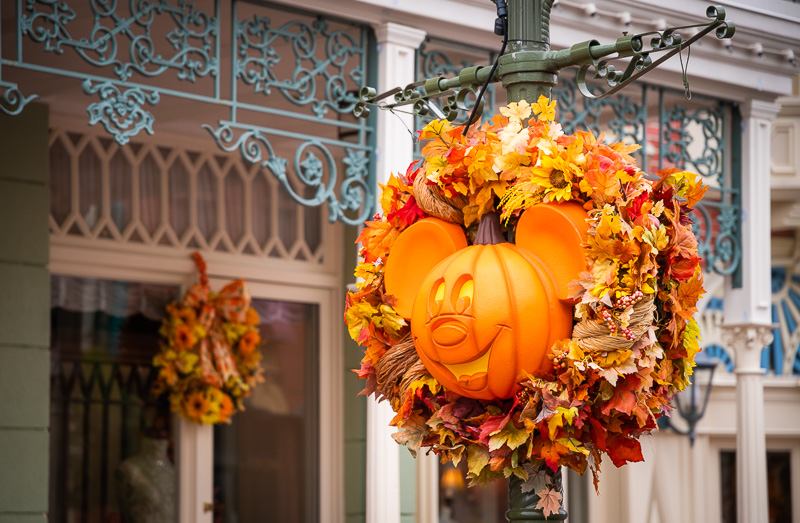 Plus, how much money is Walt Disney World even saving by reducing the Halloween decorations package? It’s not like they fabricate these pumpkins and scarecrows each year–installing them cannot possibly be that expensive.

I’d be inclined to say Disney just hasn’t installed the rest of the decorations yet, as it makes so little sense to cut them. However, given that this was the official kick-off and “influencer day,” it seems unlikely that Walt Disney World wouldn’t have had everything ready to go today. (Here’s hoping they surprise us and more appears overnight.) 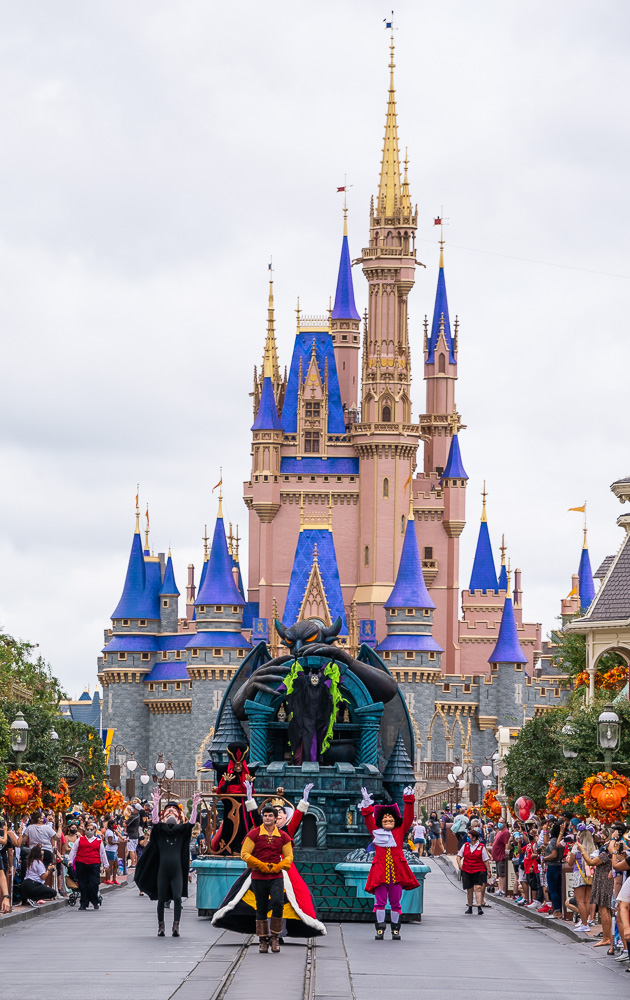 Moving along, we arrived at Magic Kingdom a couple hours after opening today, having booked a stay at Disney’s Riviera Resort last night and wanting to enjoy our room as long as possible. (Gotta take advantage of those “Adventure Season” point charts while every resort is easy to book!)

Arriving late was definitely for the best, due to the aforementioned “influencer day.” Nothing against influencers, but Main Street was surprisingly busy when we first arrived. There were significant lapses in physical distancing as a result of the crowds. While I won’t defend Disney’s cheaping out on decorations, I will defend this. Cast Members were walking up and down Main Street with physical distancing signs and reminding guests about physical distancing. They were being diligent–but it didn’t matter. 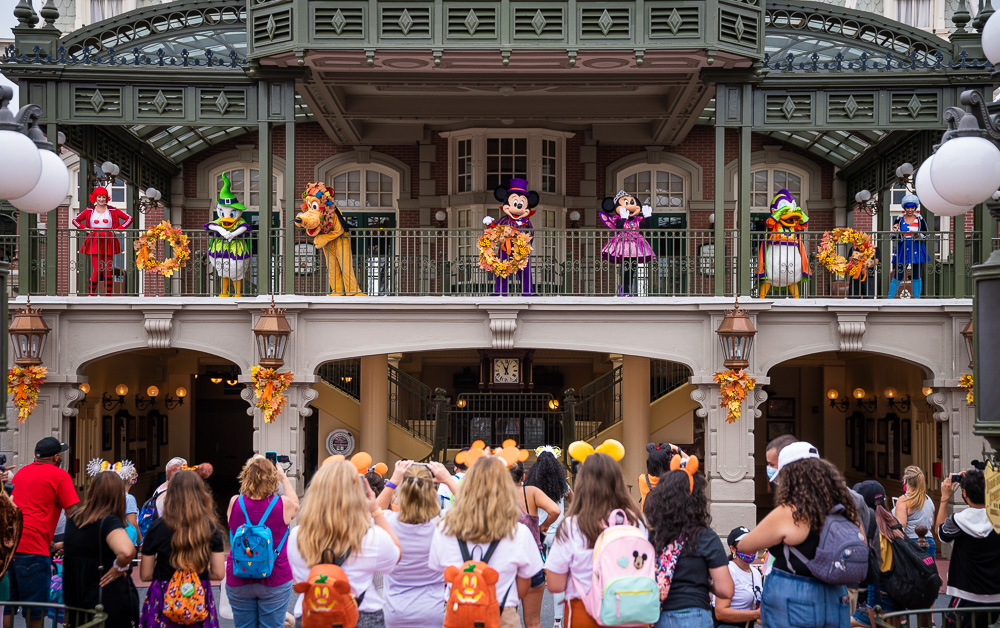 As soon as the cavalcades or character appearances started, guests “materialized” in the available space on Main Street. This happened despite low crowds and short waits throughout the rest of Magic Kingdom. (As of 2 pm, posted wait times were a relatively modest 35 minutes for Seven Dwarfs Mine Train and 25 minutes for Splash Mountain. Those were the peaks–everything else was lower.)

In a nutshell, this is why Mickey’s Not So Scary Halloween Party couldn’t be held this year. We’ve seen the exact same scenario play out time and time again during that event. Main Street ends up packed to an uncomfortable degree while the rest of the park is relatively quiet. 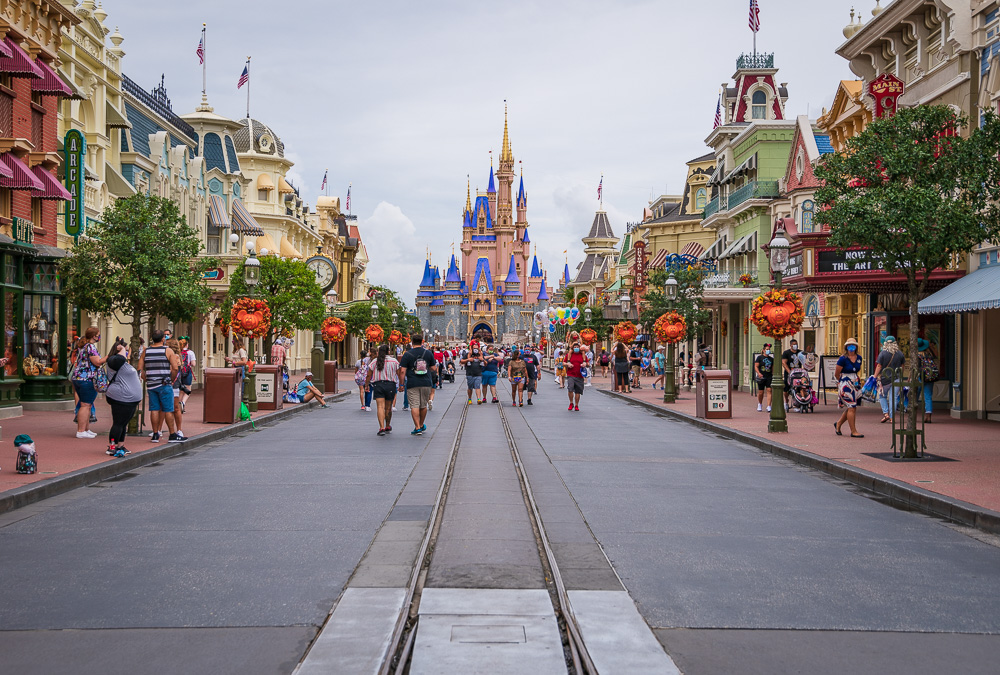 The good news here is that even on Main Street, crowds largely subsided after everyone who arrived for park opening got photos from the first ’round’ of all the cavalcades and left. From about noon on, we didn’t have any issues with physical distancing on Main Street and in front of Cinderella Castle.

Even before noon, crowds were much more sparse along the parade route in Frontierland and Liberty Square. This is another trend that carries over from Mickey’s Not So Scary Halloween Party. Of course, the trade-off is no Cinderella Castle as a backdrop. 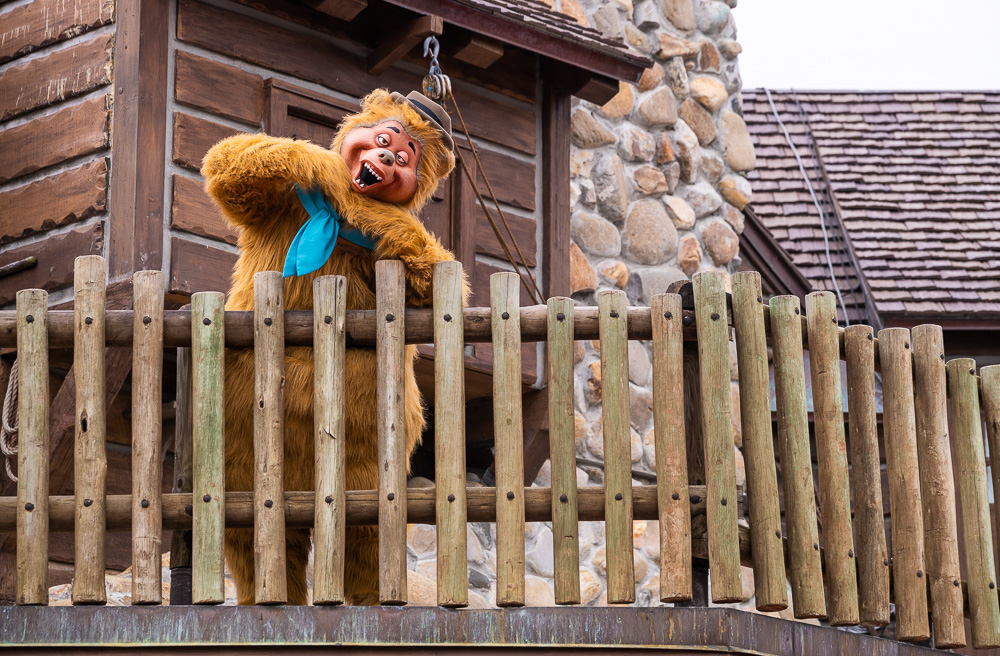 However, there’s the advantage of being entertained by Big Al, Liver Lips, and/or Wendell while awaiting the cavalcades. Many guests are saying that there’s nothing more magical than waving at bumpkin bears, and the powerfully inspiring experience has filled their hearts with joy, strength, and memories that will last a lifetime.

While it’s true that the Country Bears (both the Jamboree and smile & wave characters) are why so thousands of people are booking Walt Disney World trips right now, the pent-up bear demand is not really relevant here. 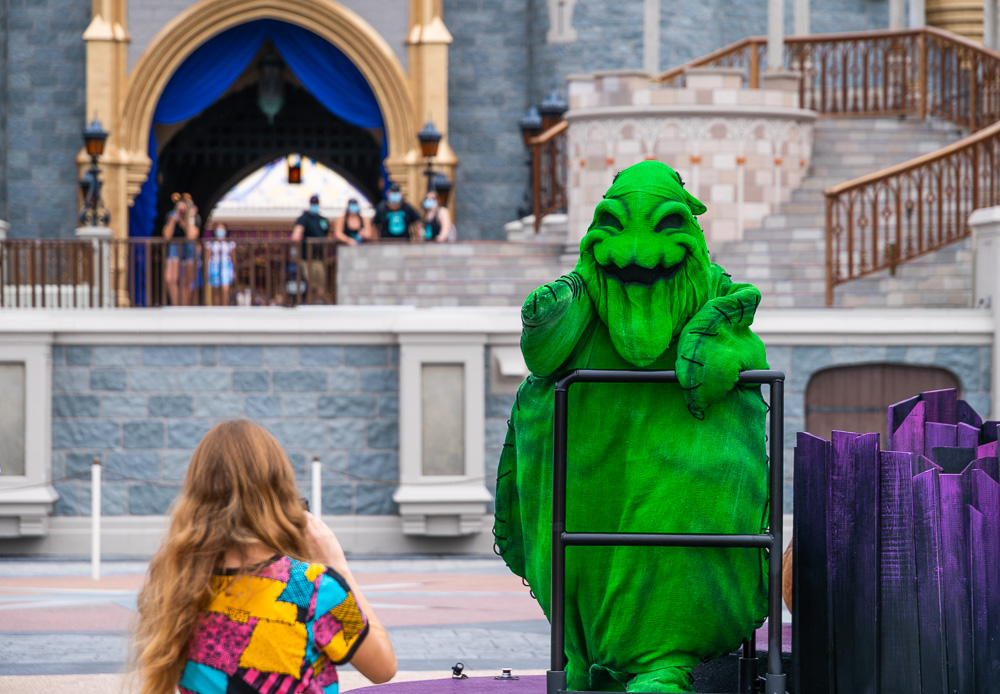 It’s premature to offer definitive viewing recommendations beyond that based upon today, but our expectation is that the middle of the day will be the best time for watching these character cavalcades on Main Street. That’s when the fewest guests are arriving and leaving, so it’s the sweet spot for the lowest crowds on Main Street.

While the crowds around the cavalcades weren’t bad today after the morning rush, we’re skeptical that this will remain the case. Today was pretty slow as a whole in Magic Kingdom (refer again to the above wait times), and it’s much likely to be busier this weekend (and every weekend thereafter) as well as once Walt Disney World enters the heart of Halloween season. It’s also possible capacity limits were lower today since it was the first day of the new entertainment. 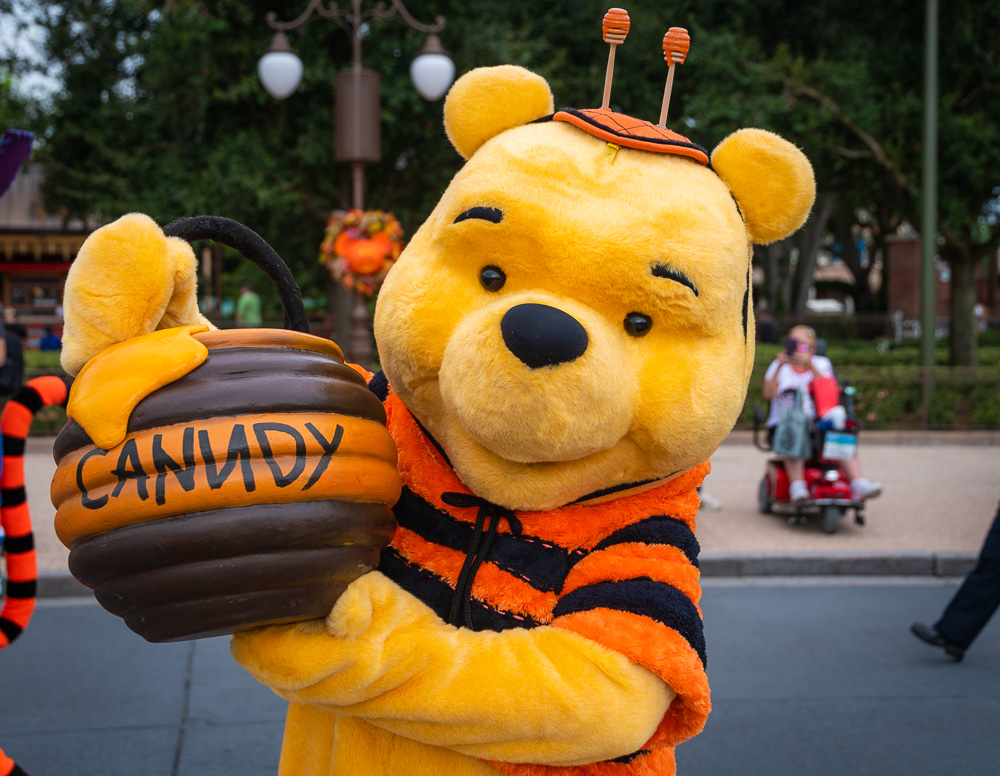 As for the substance of the cavalcades, we are fans. These are not on the same level as Boo to You, but that’s obviously a full parade.

What we get here essentially amounts to “snack sized” versions of Boo to You. The music, costumes, choreography, and performers all evoke that iconic Halloween parade. The cavalcades are enough to whet your appetite, but ultimately leave you wanting more. 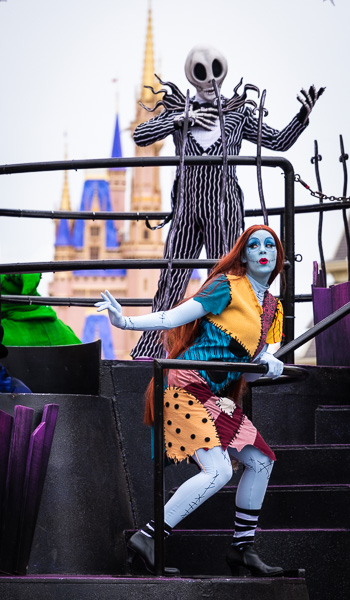 That’s not such a bad thing. There’s the obvious angle that the cavalcades prevent guests from congregating and lingering in the same spot, which is good from a health safety perspective. Additionally, there’s the fact that these run much more frequently than a full parade would, and in so doing, give Main Street a much-needed shot in the arm and sense of Halloween atmosphere.

Finally, there’s the (very real) possibility that a daytime Halloween parade just doesn’t offer the same moodiness as a nighttime one. These snippets were great in part because they evoked Boo to You and left us wanting more. I suspect a full daytime parade would’ve lacked the impact, been a hassle to see, and overstayed its welcome. (As is the case with Disneyland’s Christmas parade.) 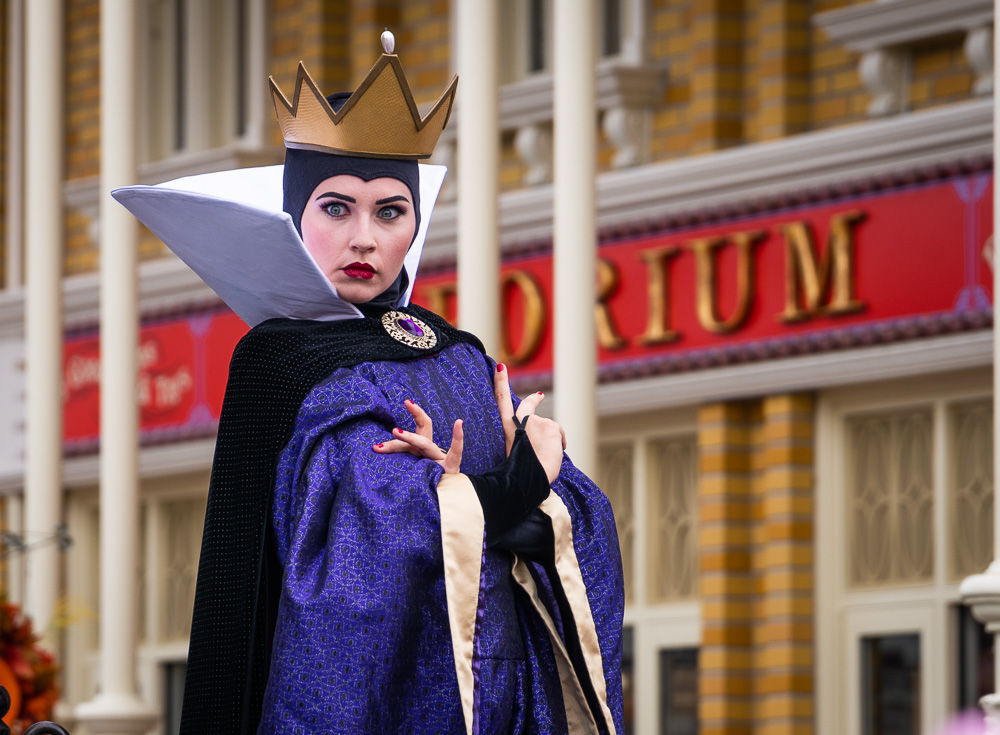 In general, these Halloween cavalcades and character greetings are a dramatic improvement over the ‘regular’ ones introduced when Magic Kingdom reopened. We were (and are) fans of those, but the Halloween offerings simply do a better job–they give the park a defined mood and atmosphere.

While the cavalcades compensate for the lack of other Halloween decorations, the whole package would be elevated even further with the rest of the decorations. (And if the regular Main Street USA background music were replaced with the Mickey’s Not So Scary Halloween Party loop.) 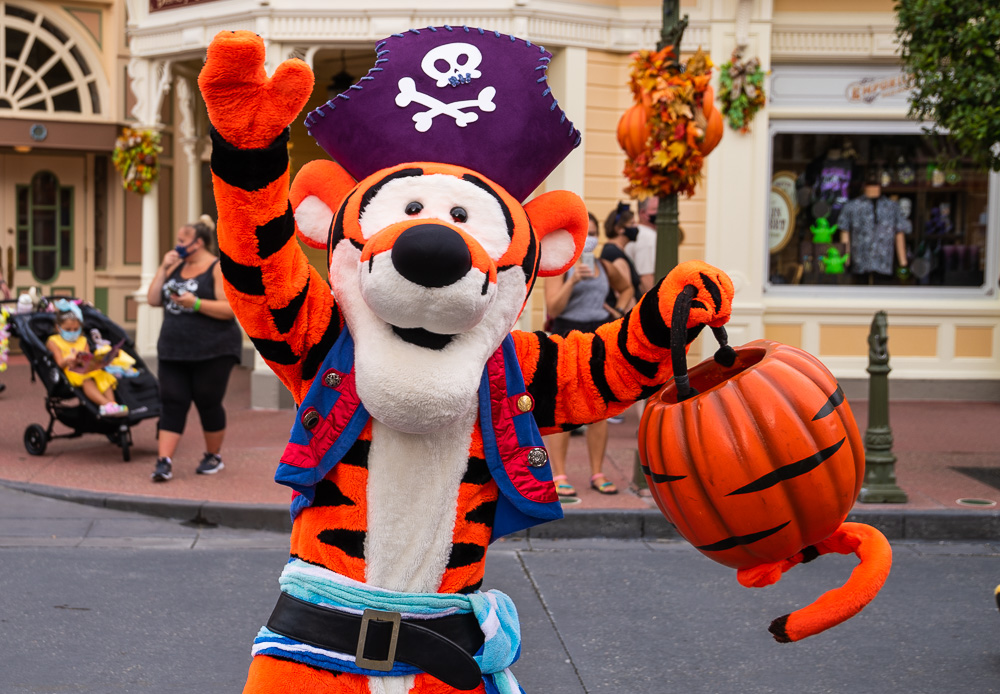 Our one blindspot here is how this will resonate with someone who has never attended Mickey’s Not So Scary Halloween Party. Part of the appeal for us was our memories of that.

However, it’s hard to imagine lack of MNSSHP experience being much of an impediment to enjoying this. It’s not like there’s a learning curve or background knowledge is a necessary prerequisite to enjoying this entertainment. Halloween is Halloween–pretty accessible stuff. Those who have done MNSSHP before might appreciate this a tad more, but that’s true of almost everything at Walt Disney World. Nostalgia is a powerful drug! 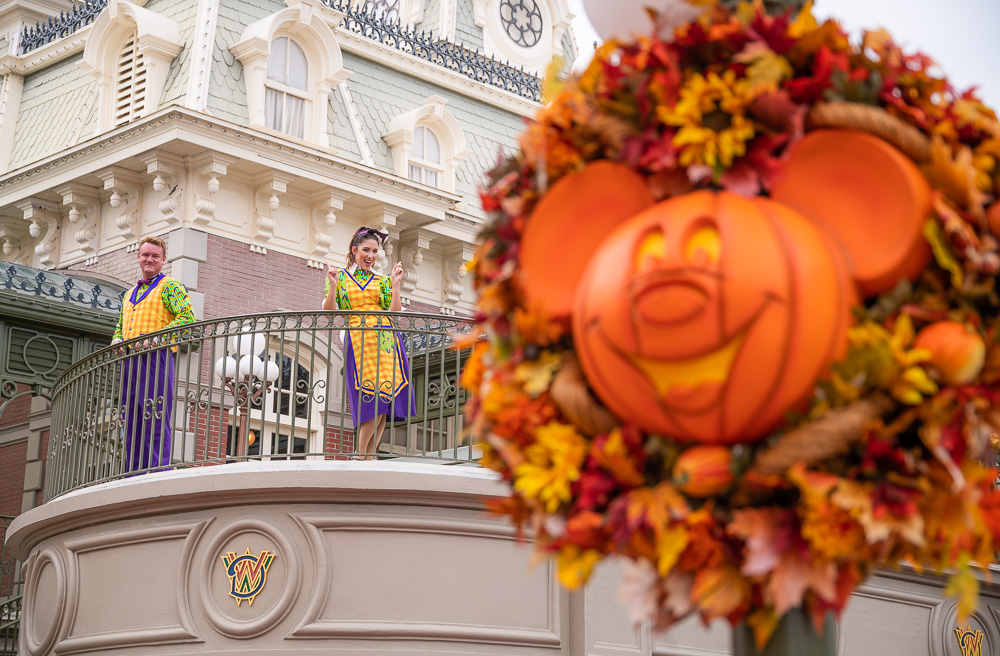 Ultimately, the Halloween entertainment and decorations at Magic Kingdom are something of a mixed bag–turns out this is both a trick and a treat. The half-hearted decorations are truly confounding. That’s low hanging fruit and Walt Disney World knows Annual Passholders and locals (who likely know what’s missing) are the main demographic right now. On the other hand, the cavalcades are better than expected and pick up a lot of the slack–it’s really nice to have seasonal entertainment without paying for an upcharge event!

All things considered, we’re pretty satisfied with this. This adds two much-needed ‘angles’ to the Magic Kingdom experience with seasonal and leisurely offerings. We look forward to returning to Magic Kingdom throughout the fall, grabbing a Halloween-themed snack, watching a cavalcade, and repeating that process. It should be a fun and laid back way of doing Walt Disney World for the next couple of months…and then repeating the process anew once November and Christmas season begin!

What do you think of the Halloween festivities at Magic Kingdom? If you’ve already visited, what did you think of the crowds, atmosphere, etc? Are you excited for the cavalcade, character costumes, or food? Planning on going in costume to Magic Kingdom in September or October? Think this will provide a nice shot in the arm for Magic Kingdom? Does this likewise have you optimistic for Christmas season at Walt Disney World? Any questions we can help you answer? Hearing your feedback is both interesting to us and helpful to other readers, so please share your thoughts below in the comments!

50 Responses to “Halloween at Magic Kingdom Review: Trick or Treat?”