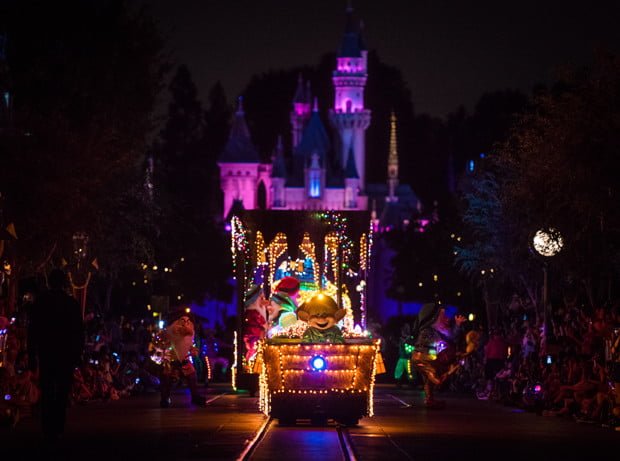 Main Street Electrical Parade made its Disneyland homecoming earlier this year for what has been billed as a nostalgic, farewell run for the parade that ran down Main Street in Disneyland from 1972 until 1996. The parade was replaced by Light Magic, which quickly became known among fans as “Light Tragic.” (If you’ve never heard of Light Magic, that’s why–it’s run was incredibly short.)

Main Street Electrical Parade then made an encore run at Disney California Adventure from 2001 until 2010 due to that park’s slumping attendance during its first decade. When construction kicked into high gear for World of Color, it could no longer run at DCA…hence it being moved to Walt Disney World for a limited run during Summer Nightastic. That limited run was extended “due to popular demand” (I don’t recall WDW fans clamoring for it to stick around), which ultimately spelled the demise of SpectroMagic, since it was being stored outside, exposed to the elements.

I’ll be blunt and up-front about this: no matter its venue, I’m not a fan of the Main Street Electrical Parade.

I find the parade antiquated and underwhelming. While I absolutely love night/light parades, changes made over the decades to Main Street Electrical Parade coupled with its total lack of updates have chipped away at whatever appeal it might’ve held for me at one point. 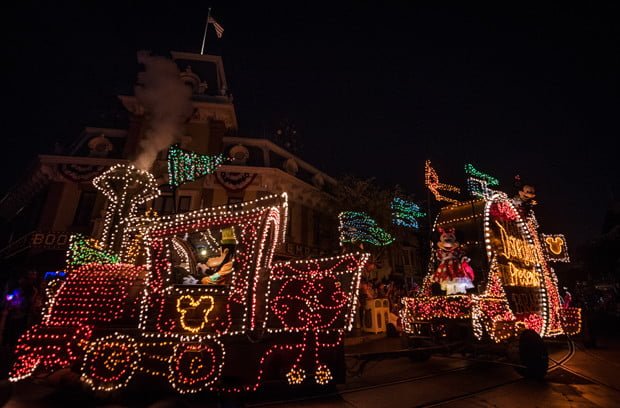 With that said, after seeing the parade wobble down Main Street in Disneyland, I kind of get some of the appeal. (How’s that for equivocation?) Main Street Electrical Parade is quaint and nostalgic in a way that is befitting of Disneyland.

The scale matches that of Disneyland’s more modest castle and welcoming storefronts. There’s something that just feels “right” about seeing a train driven by Goofy and topped by Mickey & Minnie round the corner with Disneyland Presents emblazoned on the side. It’s iconic to Disneyland, and a more appropriate parade for the park than Paint the Night. 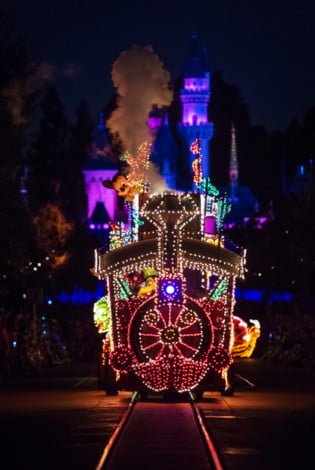 I’m not sure that’s really saying much. It is not saying that Main Street Electrical Parade–in its current state–is superior to Paint the Night. I know the latter parade is quite divisive: some people absolutely adore it and others wish it would never return to Disneyland. I wouldn’t be surprised if these stark reactions have as much to do with Paint the Night being tonally off for Disneyland as they do the actual quality of the parade.

One thing that’s fascinating to me about Disneyland–and that extends far beyond the respective fandoms of these two parades–is the internal strife between the nostalgic and the modern. These two parades probably best epitomize the division, as both parades still exist, if not coexist.

There’s a lot to this dichotomy that’s beyond the scope of this post, but the easiest way to break it down is by how long one has been a fan, or whether it’s just a passing interest in the Disney brand thanks to having kids of a certain age. That’s painting with broad, imprecise strokes, but it seems an effective proxy. 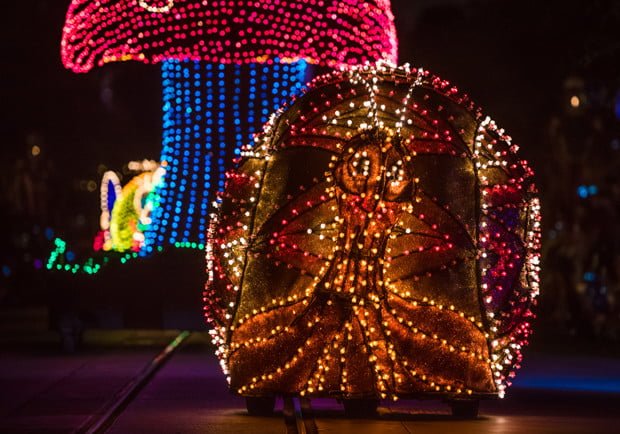 When it comes to fans and nostalgia v. modernity, there’s very little middle ground. This is probably as much a result of people choosing to see everything in black and white terms as it is about Disneyland giving fans no reason to believe there’s room for a middle ground.

If you look at recent changes to the park, there are few things that toe the line between being both nostalgic and modern. There have been throwback events and anniversaries that celebrate the past.

Then there are, separately, major projects aimed at modernizing the park, which have been at odds with the ‘charm’ and intimacy of Disneyland. Additions like Star Wars: Galaxy’s Edge and Paint the Night exemplify this, but smaller projects are also demonstrative. 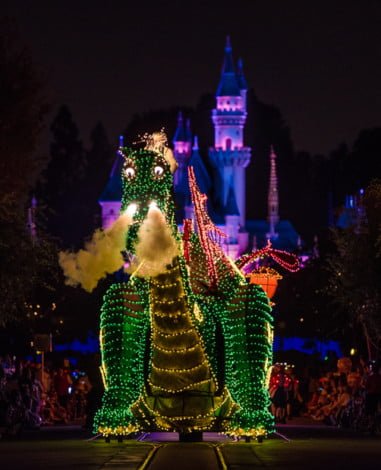 In a perfect world, the nostalgic elements of Disneyland would be updated to embrace modern technology and new additions would fit within this mold, rather than eschewing it. Rather than effectively replacing Main Street Electrical Parade with Paint the Night, a polar opposite in many regards, it would be replaced with something akin to Dreamlights–or have its aging floats updated with new effects.

In fairness, Disneyland does this, too. Updates to Peter Pan’s Flight, Alice in Wonderland, Haunted Mansion, and the Matterhorn have all been made with this end in mind. Heck, even though the changes to the Rivers of America and Disneyland Railroad were born of necessity, this was a consideration–and result–of their updates, as well. 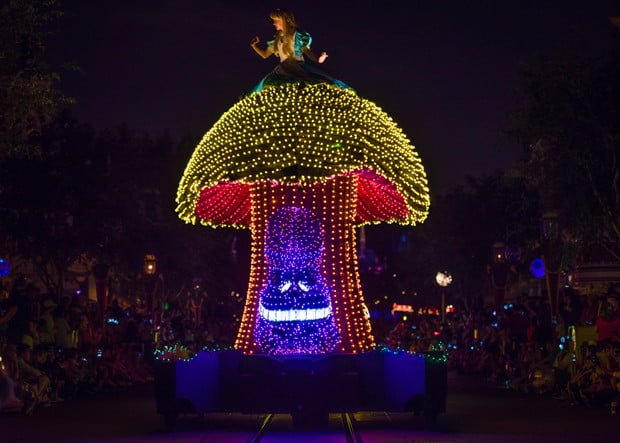 While we can quibble over the quality of the changes to each of these attractions (I’d argue they were all, more or less, changes for the better), I think it’s impossible to quibble over the impetus for the updates, and the spirit in which they were made.

Not that updates are on the table for it, anyway, but it’s understandable why Disneyland fans would be content with Main Street Electrical Parade running as-is, without updates being made to it. That’s the version of the parade with the freshest sense of nostalgia (after a long run at DCA) for them, even if it is a truncated version. Plus, there’d no doubt be skepticism among Disneyland purists over any updates to the parade that might occur given the end result with Paint the Night. 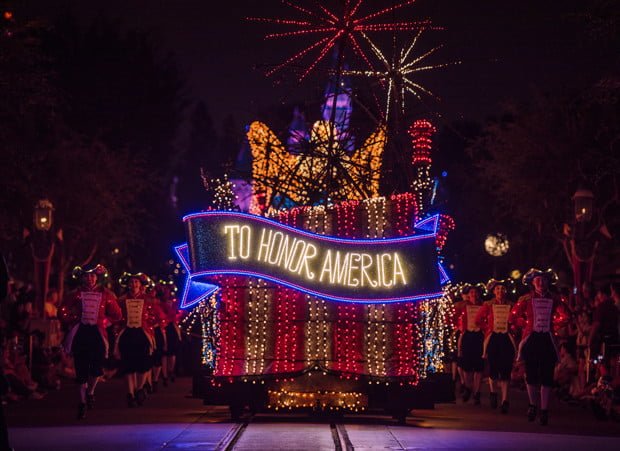 Love it or hate it (I’m somewhere in the middle), I think there’s little dispute that Paint the Night is not as good of a fit for Disneyland’s cozy Main Street. On the other hand, Paint the Night feels like it’ll fit Disney California Adventure like a glove, and between the more spacious parade route and more modern, high-energy vibe of DCA, I think Paint the Night will be a great fit for that park.

Anyway, that’s probably enough waxing poetic about nostalgic and modernity at Disneyland, and how this relates to reception of things like the Main Street Electrical Parade. After all, this post is supposed to be about the photos… 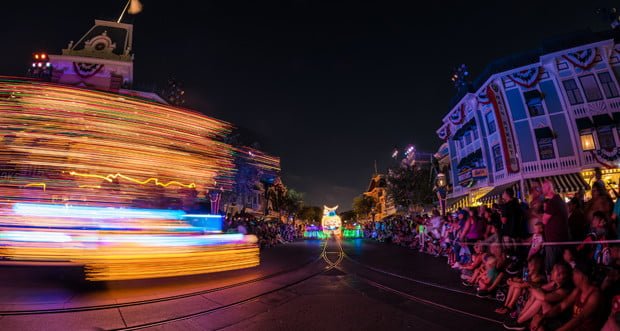 The above photo is a long exposure, obviously. On a whim, I decided to set up the tripod while sitting there during the parade after noticing something as an earlier float passed. I couldn’t get it ready quickly enough for the shot I wanted, but I thought this was neat. 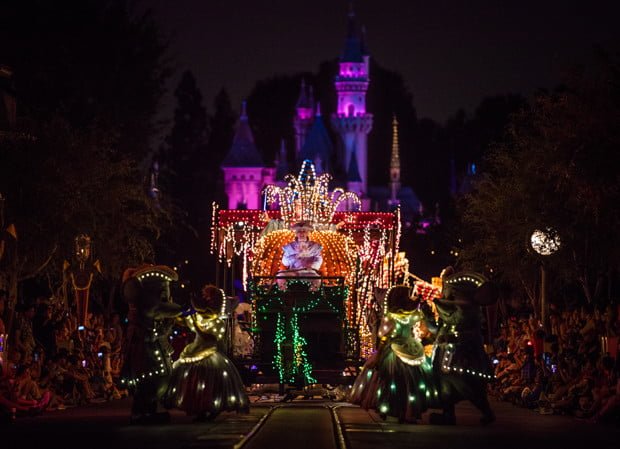 Due to the height of Sleeping Beauty Castle at Disneyland, most of the time I was photographing these floats when they were still really far away from me.

As the floats came close, the perspective caused them to block Sleeping Beauty Castle. Since my whole aim here was Main Street Electrical Parade at Disneyland photos, that would’ve been pointless. If all I wanted were photos of this parade, I have gigs of unedited Main Street Electrical Parade photos from Walt Disney World sitting on my hard drives. I could’ve just used those without camping out to see it again in California. 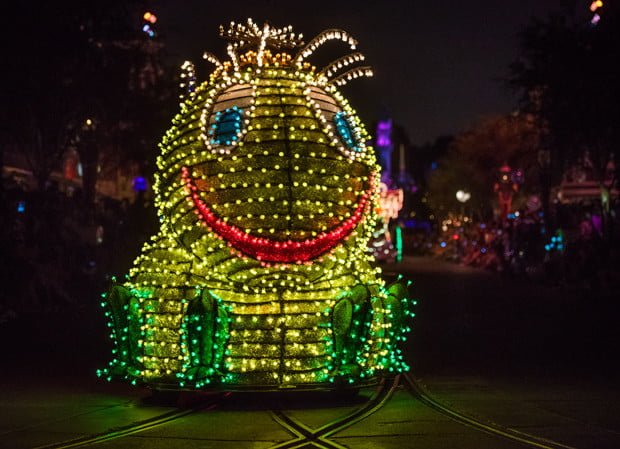 Shutter speeds for most of these photos (save for the long exposure) were around or just above 1/100th of a second. I prefer to use a slightly slower shutter speed for night parades, taking a ton of photos and being comfortable with a low keeper rate. However, with so many moving parts and only one chance to watch Main Street Electrical Parade at Disneyland, I wanted to focus on nailing the shots, rather than keeping my ISO down.

In the end, I’m glad I got to see Main Street Electrical Parade once, but I won’t shed any tears once it leaves Disneyland. My fear is that it’ll return to Florida or head to Paris, when it should be allowed to retire with dignity. Both Walt Disney World and Disneyland Paris could use nighttime parades, but what those should be–need to be–are parades befitting of those parks featuring cutting-edge technology that will entertainment and wow guests for decades to come. Sure, Main Street Electrical Parade is “better than nothing,” but that is a pretty low bar for world-class Disney theme parks.

What do you think of Main Street Electrical Parade? Have you seen it at Disneyland? Does the parade hold a lot of nostalgia for you? Are you hoping it returns to Florida or makes its way to Paris, or are you ready for something entirely new? Any photo-related questions? Hearing feedback about your experiences is both interesting to us and helpful to other readers, so please share your thoughts or questions below in the comments!