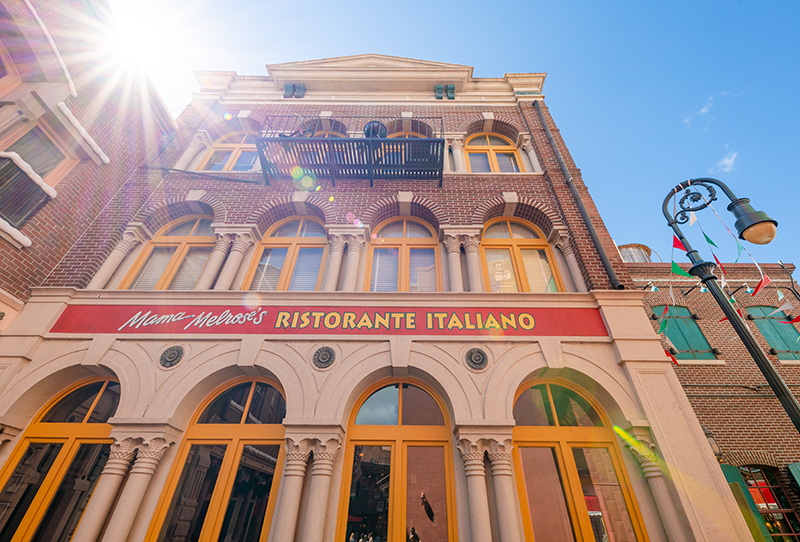 Walt Disney World has announced some relatively major menu updates coming to the parks & resorts. This post covers details and thoughts about the new food–everywhere from a buffet returning at Disney’s Hollywood Studios to brunch at Old Key West Resort, and many changes at parks & resorts in between.

Before we get into the details of the menu additions, let’s quickly recap the Walt Disney World dining ‘scene’ as of mid-June 2022. We’ll start with the good news: most restaurants have reopened, to the point that the number of locations that are unavailable is fairly insignificant in the grand scheme of Walt Disney World’s dining capacity. See Open & Closed Restaurants at Walt Disney World – Summer 2022.

Additionally, restaurants that have been open for a while have slowly but surely scaled up operations, expanding menus, bringing back breakfast, buffets, or other missing meal services. Perhaps the emphasis there should be on slowly, as most are still in “modified” format, with various components cut or reduced–whether that mean characters still not appearing, reduced menu selections, and/or buffets converted to family style service. We have some good news here that addresses the latter two issues for a few restaurants.

Some of that pessimism stems from dining capacity. Most restaurants have reopened, but there are very few are operating at full capacity. Some are closed 2 days per week, many tables go unfilled, service is slower, and the whole process simply is not firing on all cylinders. Staffing shortages are the underlying reason for all of this, which is also why many menus still are scaled back, buffets aren’t back, and several princess dining experiences have yet to return.

With that out of the way, let’s turn to the new menu updates at Walt Disney World…

At Magic Kingdom, join in on galactic celebrations for everyone’s favorite space ranger with this special treat inspired by his new film “Lightyear.” The new Zurg Freeze can be found at Auntie Gravity’s Galactic Goodies starting tomorrow and is available through the end of June. It’s the perfect treat to reward yourself for a successful mission on Buzz Lightyear’s Space Ranger Spin.

Okay, so nothing “major” here. To the contrary, this is actually quite underwhelming, especially at the park that needs more menu help than anywhere else at Walt Disney World. Can we at least get a few worthwhile menu items back at Cosmic Ray’s??? 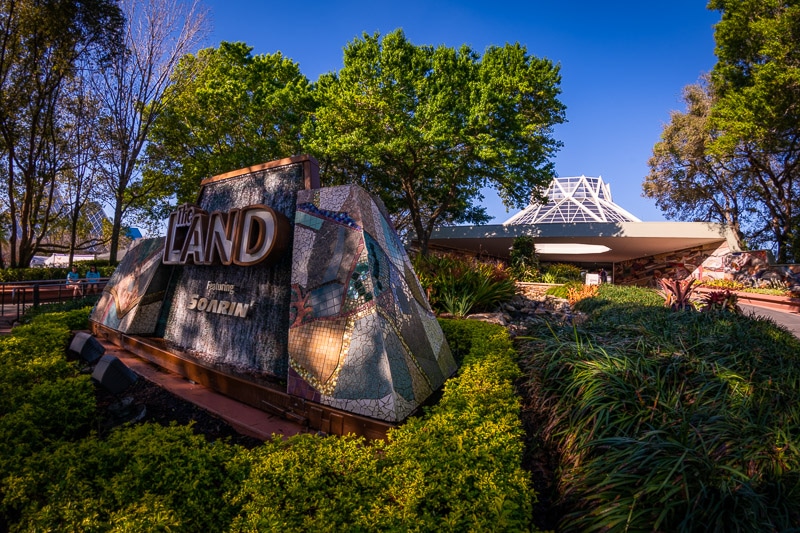 Speaking of once-beloved restaurants that have fallen from grace, there are improvements coming to the Land pavilion at EPCOT. At Sunshine Seasons, you can enjoy a Roast Beef Sandwich with chilled roast beef, chimichurri aïoli, cheddar, arugula, and red onion on a flour-topped kaiser roll served with potato chips. 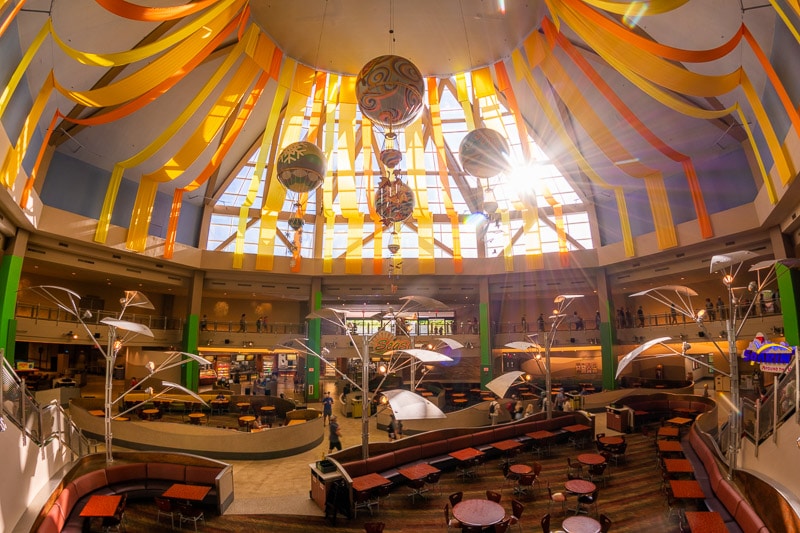 While the new menu at Sunshine Seasons is still a shadow of its former self, it’s a colossal improvement from the last couple of years. Even pre-closure, Sunshine Seasons was going downhill; here’s hoping this is the start of that trend’s reversal.

With Connections Cafe offering surprisingly solid choices on the ‘elevated theme park fare’ front, hopefully Sunshine Seasons can return to serving an ambitious menu of healthy-ish cuisine. For the first time in a while, we’re looking forward to eating there. 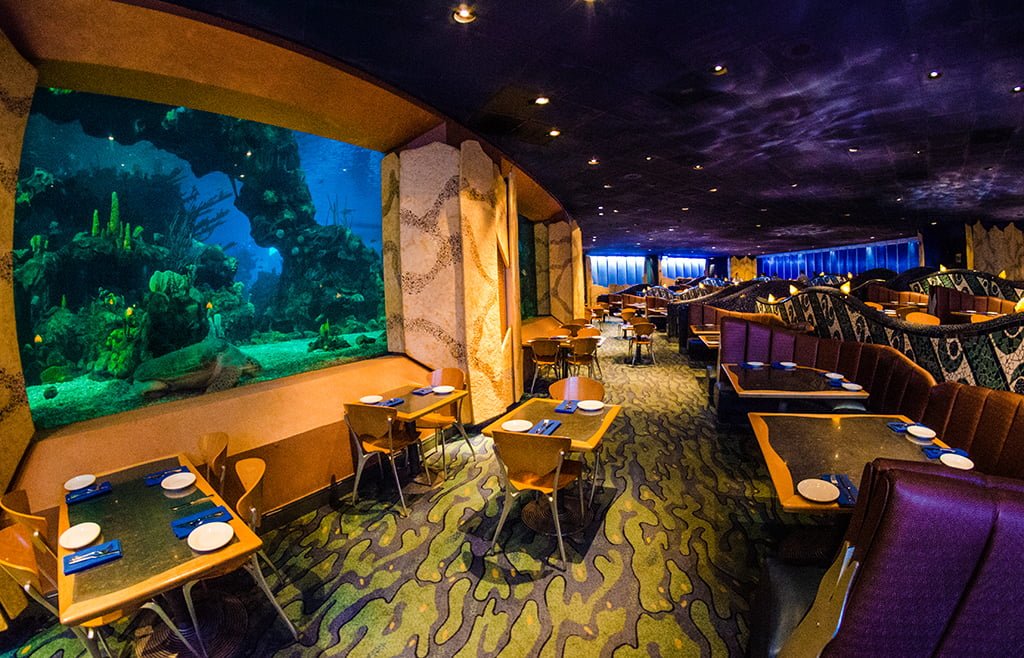 On the table service front at EPCOT, a new Barbecued-roasted Chicken with Sweet and Tangy Barbecue Sauce as well as a Southern-style Spoon Bread are now available at Garden Grill.

Coral Reef Restaurant has also seen some enhanced items recently. Start off your meal with new appetizers like the Trio of Seasonal Dips with fresh vegetable crudité and crisps or the New England Clam Chowder. As you enjoy the underwater views, feast upon entrée additions like the Orange-glazed Sustainable Salmon served with vegetable stir-fry and shiitake sticky rice. If this doesn’t quite float your boat, consider the Cajun Chicken Pasta filled with pulled Cajun-spiced chicken, parmesan cream sauce, roasted mushrooms, peas, peppers, and onions.

In some exciting return to normalcy news, Hollywood & Vine at Disney’s Hollywood Studios will be welcoming back their buffet on August 28, 2022. As you get to meet some of your favorite Disney Junior pals for breakfast and Minnie and her friends for lunch and dinner, you’ll be able to feast upon all-you-care-to-enjoy delights.

For breakfast, Hollywood & Vine will be serving up options like Brioche French Toast with Banana Foster Sauce, Salmon and Bagel Casserole, and Plant-based Frittata with tomato jam. 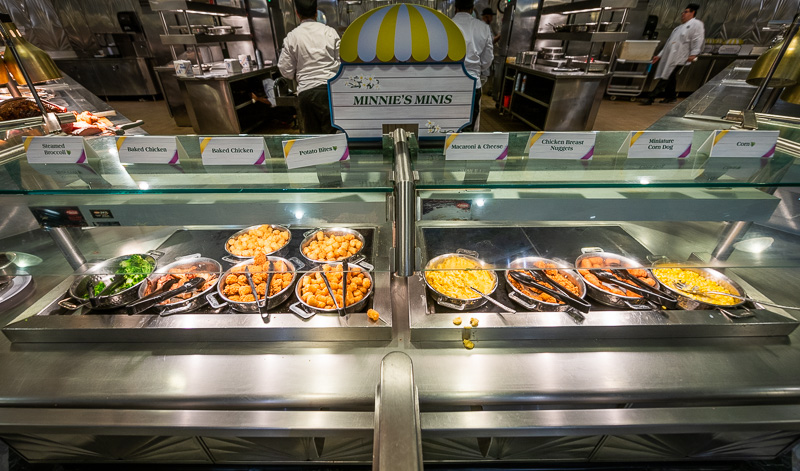 When Minnie Mouse and pals come out to play, the buffet will switch over to lunch and dinner, featuring the Plant-based Roasted Mushroom Farro Risotto, Slow-roasted Crispy Pork Belly with Guava glaze, and Shrimp and Bacon Mac & Cheese. To finish off your meal, there are plenty of desserts to choose from, such as the Mississippi Mud Pie or the PB&J Tarts.

Hollywood & Vine has long had a reputation among fans as being one of the worst restaurants at Walt Disney World. However, we did it several times between 2017 and March 2020, and had some solid meals. Perhaps it was just good luck on our part, but we felt the buffet was far better than its reputation suggested. (The character interactions were always fantastic, too.)

We’re really looking forward to having that buffet back–here’s hoping the other modified family-style meals follow suit in short order. Still lots of character meals that are operating in their ‘phased reopening’ states–or not at all. 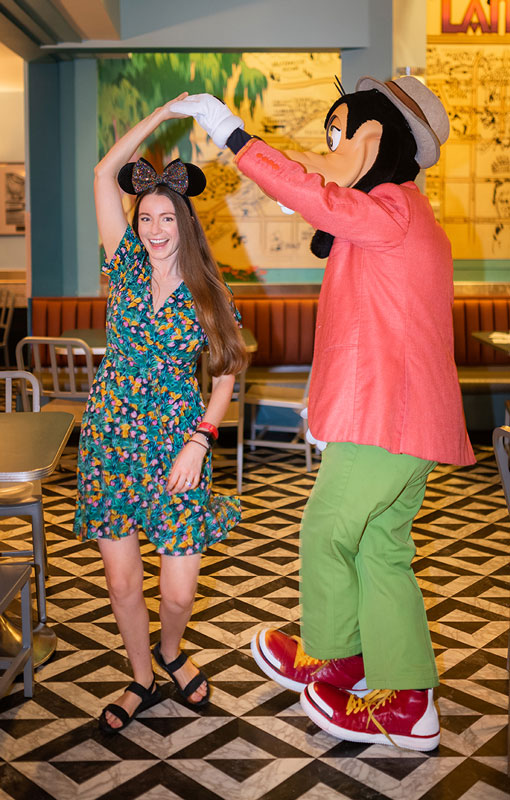 While we’re happy to hear this news, it actually puts us in an awkward position. For her birthday in late July, Sarah wanted to do either Minnie’s Summertime Dine or Victoria & Albert’s (yes, we’re very aware of the stark differences between the two). The new pricing for V&A’s ruled that out, making Hollywood & Vine our default choice.

However, dining at a restaurant before a new menu debuts is a grave violation of the sacred Bloggers’ Code. The Code is more what you’d call ‘guidelines’ than actual rules…and is likely not applicable on birthdays or federal holidays. So we’ll see!

The Grilled Bone-in Pork Chop entrée is another new option, and this dish is accompanied by creamy polenta, roasted tomatoes, mustard vincotto, and charred broccolini. You can also indulge in new versions of Mama’s Italian Pasta and the Sustainable Fish dish. For dessert, there are several new eats to choose from – the Mini Cannoli Trio, Colors of Italy Cheesecake, Mama’s Cookies To Go, and Blueberry Frangipane Tart.

Continuing with DHS, there’s a new good ole’ fashioned family meal at 50’s Prime Time Café. Step back in time with some of their new plates that bring TV dinner to a different level that feels just like home, which are now available. If you love a little kick, try the Jalapeño Popper Deviled Eggs. 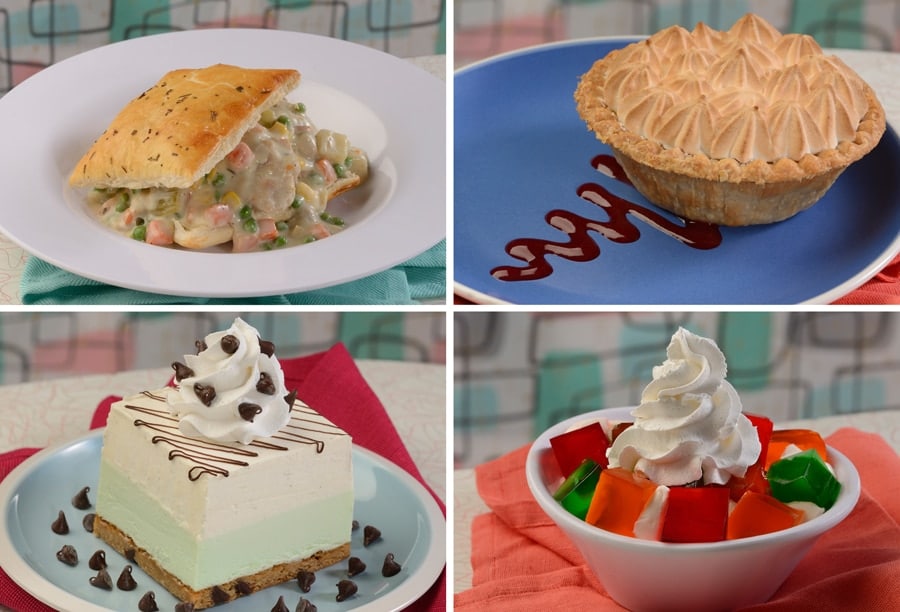 Save room for dessert after these eats, because there are a few sweet treats making an appearance. The Pineapple Upside Down Cake features yellow cake soaked in pineapple juice topped with caramelized pineapples and maraschino cherries and garnished with whip cream and caramel sauce.

Rounding out these additions is the Stained Glass Dessert for kids. This dessert is a whipped pineapple fluff studded with cubes of strawberry, lime, and orange gelatin to look like stained glass.

Always a popular spot in the summer is Hollywood Scoops, which is now serving up a new Key Lime Milkshake.

The Cold Brew Black Caf features Joffrey’s Cold Brew, sweet cream cheese, and cocoa puffs and is a delicious non-alcoholic treat. For a more adult version, the Spiked Cold Brew Black Caf has an extra ingredient – Godiva liqueur. These have been huge hits in Star Wars: Galaxy’s Edge at Disneyland–nice to see them make their way to Florida.

Continuing outside the parks to Disney’s Old Key West Resort where Olivia’s brunch service will be available every day of the week starting on September 1, 2022. (No word on Advance Dining Reservations, but presumably they’ll open when the normal ADR window arrives.)

This expanded offering will feature favorite classic brunch items, like the Southernmost Buttermilk Fried Chicken and the Papa’s Hash. There will also be new offerings added to the menu–like the Banana Bread Pudding. This decadent dish features Bahamian banana-rum syrup and coconut whipped cream with your choice of bacon, sausage, or ham, and is sure to give you those sought-after island vibes.

As much as I’m a sucker for Banana Bread Pudding, it’s tough to resist the Southernmost Buttermilk Fried Chicken. That’s one of my favorite comfort foods anywhere at Walt Disney World.

Several resorts across Walt Disney World also have some new sweet treats. World Premiere Food Court at Disney’s All-Star Movies Resort is serving up the Box Office Cupcake, a yellow cupcake filled with caramel and topped with marshmallow buttercream and a peanut-pretzel-popcorn brittle.

Intermission Food Court at Disney’s All-Star Music Resort has the Rock and Roll Cupcake, another yellow cupcake but this one is filled with peanut butter buttercream and topped with banana panna cotta and candied bacon. Rounding out the trio is the MVP Cupcake at End Zone Food Court, available at Disney’s other A.S.S. acronym, All Star Sports. This yellow cupcake is stuffed with apple pie filling and topped with a buttercream baseball and caramel popcorn-peanut crunch.

Take a trip into the animated world of some of your favorite Disney stories at Disney’s Art of Animation Resort, where they’ve got some delights for you too. At Landscape of Flavors, try the Lighting McQueen Gravel Road Sundae featuring vanilla soft-serve ice cream with chocolate cookie crumbs, chocolate sauce, and a Lightning McQueen chocolate coin.

Disney’s Pop Century Resort also has a couple of new sweets. At Everything POP Shopping & Dining, the pastry chefs have whipped up the Flashback Crème Pie, an oatmeal-raisin cookie sandwich filled with marshmallow crème topped with dark chocolate and cinnamon glaze, as well as the Pop Goes the Bananas Cupcake, a yellow cupcake filled with caramelized banana in a pastry crème topped with caramel-latte buttercream.

Ultimately, a lot of restaurants still have a ways to go before being back to normal, but incremental progress is good, too. Although not covered here, the last two Value Resort food courts–Landscape of Flavors and Everything Pop–have seen new and returning entrees in the last couple of months. Again, they’re not on par with February 2020…but they’re much better than the end of that calendar year.

While the whole process has been a lot more drawn out than we ever imagined or anticipated, at least things are getting better. As impatient as I might be, I’m happy to see these gradual improvements. My fear was that, after 2 years of scaled back menus and meal services, Walt Disney World would conclude it could “get away with” that, and the changes would become permanent. Based on what we’re seeing, that is not the case. For us, Walt Disney World is almost as much about the food as it is the attractions, so these menu updates are fairly major from our perspective.

Thoughts on these new appetizers, entrees, and desserts debuting at Walt Disney World in the coming months? Do you agree or disagree with our assessment of these incremental menu improvements? Any questions we can help you answer? Hearing your feedback—even when you disagree with us—is both interesting to us and helpful to other readers, so please share your thoughts below in the comments!