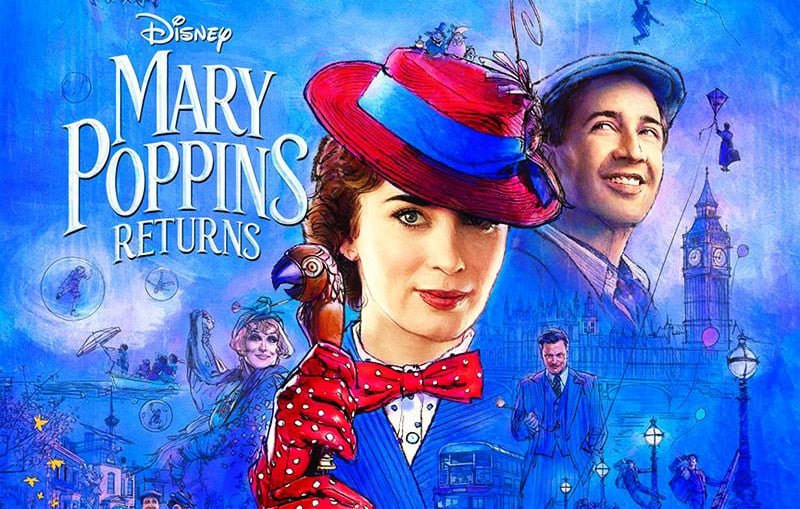 We recently had the chance to see Mary Poppins Returns, and thought we’d share our thoughts in a spoiler-free review. To say we were skeptical when a sequel to the beloved Walt Disney-era musical was announced would be an understatement.

In an era when Disney seems to announce new unnecessary “live action” remakes on a weekly basis, my assumption was that Mary Poppins Returns would be another formulaic cash grab–basically, the antithesis of Mary Poppins. Not even a cast with Lin-Manuel Miranda and Emily Blunt was enough to assuage my fears.

My expectation was an overproduced film that would play it safe, taking zero creative risks, and doing virtually nothing new. A movie that would be offensive to the legacy of Mary Poppins simply by virtue of taking great lengths to be inoffensive. Thankfully, that was not the case.

Mary Poppins Returns is not simply a franchise reboot or, worse yet, a beat-for-beat remake masquerading as a sequel. The movie paves its own path. It’s familiar to fans of the original, but a very different movie. Mercifully, it doesn’t try to be hip, edgy, or modern. Rather, it carefully balances imagination with nostalgia for something that evokes the spirit of the original for something new, fun, and incredibly imaginative.

The last two words there are key: fun and imaginative. There are a couple of things in Mary Poppins Returns that we haven’t seen in a while, and one segment will leave traditional Disney fans grinning ear to ear. It’s hard to articulate how, precisely, all of this occurs without straying into spoiler territory. Suffice to say, you’ll know exactly what we mean when you see it–and in no way is this lame fan service by the filmmakers.

To be sure, some of the risks Mary Poppins Returns takes won’t appeal to everyone, nor will its approach. The songs here are entirely new, and these sometimes lengthy numbers digress from the plot more than a few times. There are also several peculiar and weird sequences to the film, and we absolutely loved this.

In an era when Disney often goes to such great lengths to polish its product to the point of blandness, the quirkiness of Mary Poppins Returns is refreshing. It’s still slick and well-produced, but it’s not formulaic and doesn’t have the sensibility of a movie carefully put together by committee. Mary Poppins Returns is creative, as it should be. (Oh, and it’s thankfully light on the CGI.)

I’ve left most of the recent Disney remakes finding little to fault, but still thinking, “why would I re-watch that when it’s basically an inferior copy of the original?” While it’s doubtful this sequel will have the staying power of the original Mary Poppins, a ground-breaking film with legendary music, at least this movie is doing interesting new things and creating its own legacy.

All of the performances are great, but it’s Emily Blunt as Mary Poppins that’s most worthy of discussion. The approach here differs from that of Julie Andrews, which not all viewers may appreciate. By Blunt’s own account, she is going for the slightly acerbic and eccentric version of Poppins, as originally written by P.L. Travers.

I loved Blunt’s twist on the character. It was not an outright divergence from Andrews’ portrayal, but had that ‘familiar but different’ vibe that permeates the film. For me, Blunt’s dry wit provides a nice contrast to the sugary tone of the songs and the film’s overall sense of joviality.

Blunt is a great fit for the Mary Poppins character, but notably less so for the Julie Andrews version of the Mary Poppins character. Blunt provides arguably better sharpness and acting, while inarguably inferior vocal performances. On balance, I think she’s the perfect choice for the role, but I’ll be the first to admit that I’m not a Mary Poppins diehard; perhaps my perspective here will differ from other fans. If you’re expecting Andrews, there’s a good chance you’ll be disappointed.

While the musical numbers are new, they certainly evoke those from the original. It’s a sly and interesting approach, and one that works. Again, that ‘familiar but different’ approach. None of them really struck me as having instant earworm quality, but I also wasn’t alive in the 1960s, so I don’t know if those songs did, either. I certainly enjoyed the new music, but think its longevity or legacy status will remain an open question for a while.

The argument could be made that a couple of these songs could be cut in service of creating a tighter film or strong narrative. I firmly disagree. I don’t think the story is why anyone re-watches Mary Poppins, and the same will be true here. The narrative of Mary Poppins Returns is established from the outset and is pretty straightforward: a quest to save the Banks family home from foreclosure.

The story is predictable, and unquestionably the weakest part of the movie. That might read like a damning assessment, but fortunately, the musical numbers all but ignore the plot. Same with Mary Poppins’ interactions with the Banks children. These are the strengths of the film, and the soul of the movie not being beholden to story is a good thing.

Perhaps it’d be ideal if the musical numbers were woven into and advanced the plot, but it’s all “close enough” in Mary Poppins Returns. In fact, I think this degree of breathing room allows the musical numbers sufficient latitude to shine in all their goofy glory. They are unrestrained fun, and are the kind of material that would make a less prolific film fodder for becoming a future ‘cult classic.’

There’s so much more that’s worth discussing about Mary Poppins Returns, but without veering into quasi-spoiler territory, we can’t really go there. We’ve purposefully glossed over three semi-specific aspects of the film that we loved because they were delightful surprises when we saw the film.

Neither of us had seen a single trailer before watching, nor had we read any reviews, interviews–anything. Every review I’ve read since has revealed these things. They’re definitely minor, but if you don’t already know what I’m talking about, do yourself a favor and don’t read anything else–go into Mary Poppins Returns blind. If you’re a Disney fan, you know you’re going to see this movie; enjoy those little surprises for the first time in the theater.

Overall, there is much to critique and dislike about Mary Poppins Returns if you set out upon dissecting it as a film. It’s a meandering movie not without faults, but one that is best viewed in terms of fun. This is not faint praise, as I think the same could be said about the original…and about several Disney films. Fun and imagination are ultimately what both Poppins films boil down to, and the sequel absolutely holds its own in that regard. We both absolutely loved Mary Poppins Returns, and will be seeing it again on the big screen. It’s pure cinematic joy, and the kind of movie that you’ll leave satisfied and happy.

advice? Make sure to read Disney Parks Vacation Planning Guides, where you can find comprehensive guides to Walt Disney World, Disneyland, and beyond! For Disney updates, discount information, a free download of our Money-Saving Tips for Walt Disney World eBook, and much more, sign up for our free monthly newsletter!

Are you looking forward to Mary Poppins Returns? Are you looking forward to the trip down memory lane, revisiting these characters and seeing them in new musical numbers? If you’ve seen the movie, do you have any spoiler-free feedback? Is this a worthy successor to the original? Anything from Mary Poppins Returns you’d like to see in the parks? Share any of your thoughts in the comments!