Who’s the best Candlelight Processional narrator? That’s obviously subjective, and Walt Disney World fans will have a range of opinions based upon their favorite celebrities, Disney Legends, and so on. The most popular narrator at Epcot for the past several years has been Neil Patrick Harris (one of his nights was even chosen as this year’s live stream of Candlelight Processional), with other favorites including Whoopi Goldberg, Jodi Benson, Cal Ripken Jr., and Pat Sajak.

We’ve seen over a dozen different narrators over the years, and until this year, my favorite would’ve been someone different entirely: John O’Hurley. If you responded “who?!” that’s a shame. Watch this in full before reading on. Now that you’re back, kudos on a job…done. Perhaps better known as J. Peterman on Seinfeld, we loved John O’Hurley because his powerful voice added punch to Candlelight Processional, while also reminding us of the bombast utilized when delivering one of J. Peterman’s rambling diatribes. O’Hurley’s narration was moving, yet also slightly humorous (to us) for its unintentional similarities to Seinfeld.

But this is not an article about Seinfeld (no matter how much it should be). This is about our new favorite Candlelight Processional narrator, John Stamos. From one 1990s sitcom, we jump to an even older one. Except here, what’s old is new again, as Full House has been revived by Netflix as Fuller House…and because John Stamos “ages” (air quotes) like a fine wine.

It probably doesn’t require a full blog post to say what could more succinctly be said in the title of one, but I took a ridiculous number of photos during our viewing of Candlelight Processional–not just of John Stamos, but also of the conductor Dr. Jeffrey Redding (who was exceptional), and also of other random things.

I thus figured I’d expand upon my thoughts about John Stamos as the celebrity narrator and share some other thoughts as an conduit for sharing these photos. 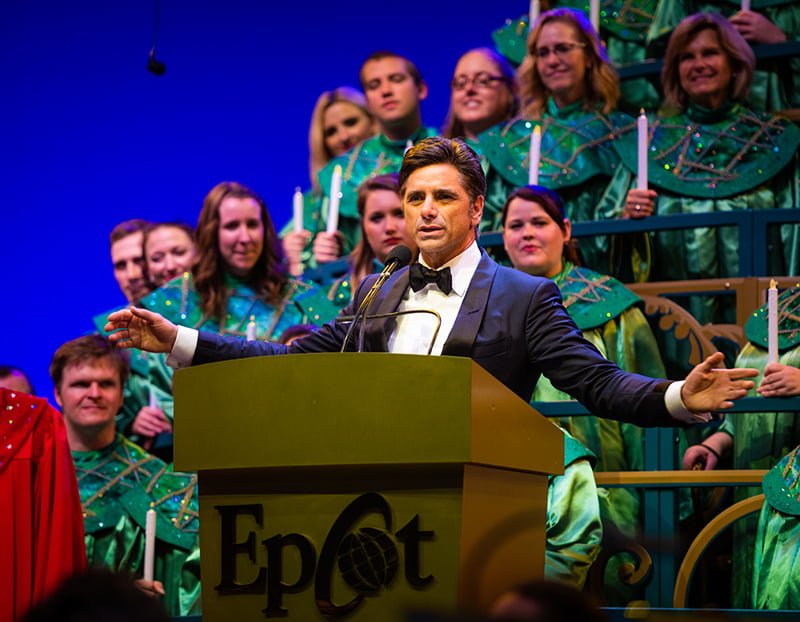 John Stamos scores major points as Candlelight Processional narrator for a few reasons. Most significantly, he’s actually a Disney fan. Celebrity aside, this is the big reason that Neil Patrick Harris is a perpetual favorite, and John Stamos is arguably a bigger Disney aficionado. Not that such a thing can be measured, but the size of the giant Disneyland ‘D’ owned by Stamos says quite a bit. And that’s just one Disney item he’s won at auction.

Stamos is also regularly-spotted as a guest at Disneyland (we’ve seen him both there and at Walt Disney World), he’s hosted an Imagineering panel at the D23 Expo, and even proposed to his now-wife at Disney California Adventure. By all accounts, he’s a huge Disney fan. 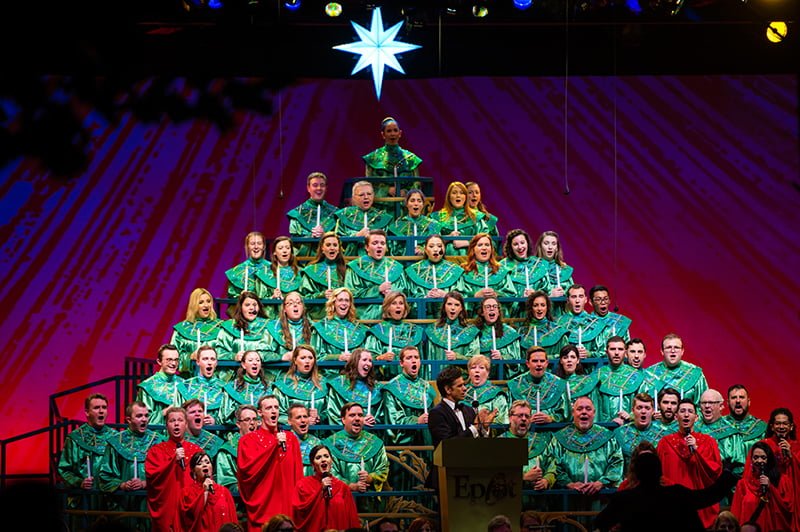 In fairness, being a Disney fan is not a prerequisite for being a good Candlelight Processional narrator. I’d hazard a guess that many narrators–even the good ones–view it as fulfilling a contractual obligation or a nice way to make their kids happy with a holiday trip to Walt Disney World. Passion isn’t necessary to do a competent job. (Just look Bill Paxton’s truly superlative work in the ‘Twister…Ride It Out’ pre-show…or maybe don’t.)

In the case of Stamos, though, passion enhanced the job he was doing. During songs, he looked like he was on cloud nine. He had an ear to ear grin, and clearly was enjoying himself. He was riffing between delivering his dialogue, and danced during a couple songs. 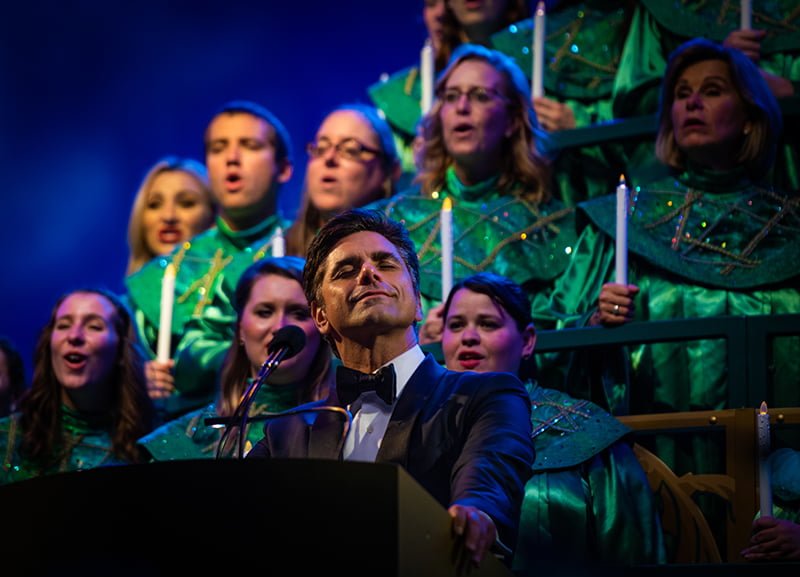 It certainly didn’t seem that he was just hamming it up for the audience (much of the time, his enthusiasm was out of the spotlight); this came across as genuine enthusiasm. He was very into the experience, and we attended his final show of the weekend, so it’s not as if it was new and exciting at that point.

Stamos was conversational and personable during Candlelight Processional, and his closing remarks were moving and sincere. There was nothing workmanlike or ordinary about his narration, and this ‘above and beyond’ approach really made a huge difference to us. I’d assume the same is true for other Disney fans who got the chance to see John Stamos as Candlelight Processional narrator. 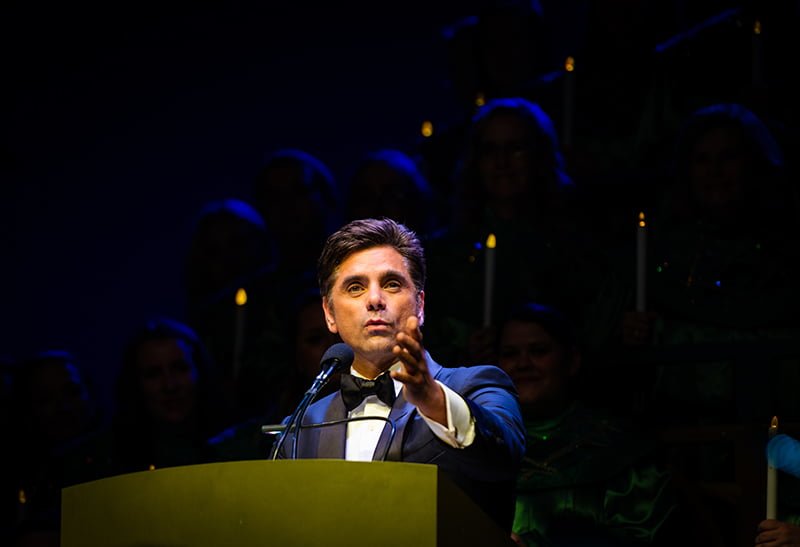 If you didn’t have the opportunity to catch one of John Stamos’ appearances at Candlelight Processional, do not despair. I’d hazard a guess that he will be back. To be honest, I’m surprised that he isn’t in the regular rotation for Candlelight. He did such an exceptional job and it’s such a natural fit that he should be one of the marquee annual narrators.

Or, perhaps Walt Disney World has contacted him every year since he last hosted (which I believe was over a decade ago) and schedules have gotten in the way. Stamos had the same type of presence and relatability as Neil Patrick Harris, which has made the latter a fixture of this season at Walt Disney World. As with NPH, Stamos needs to be back in this role again. 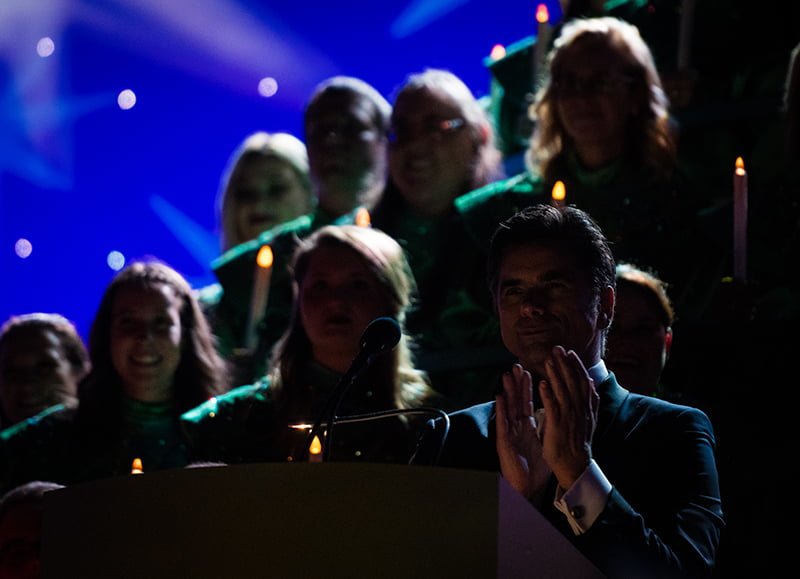 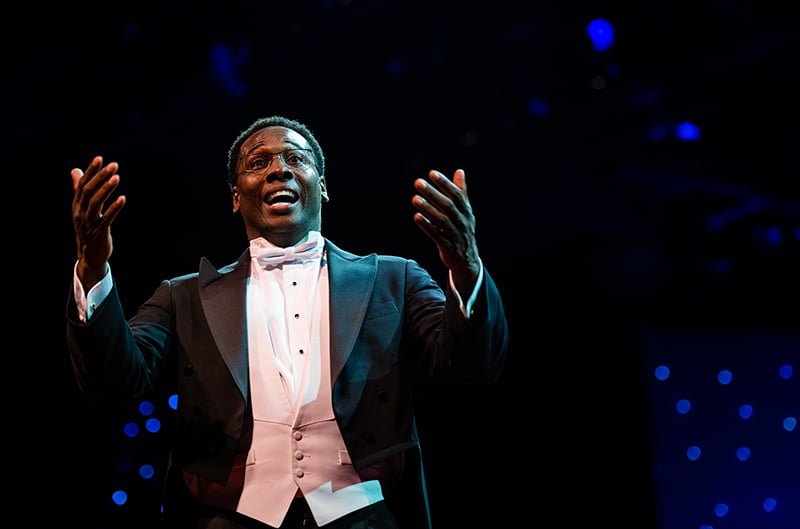 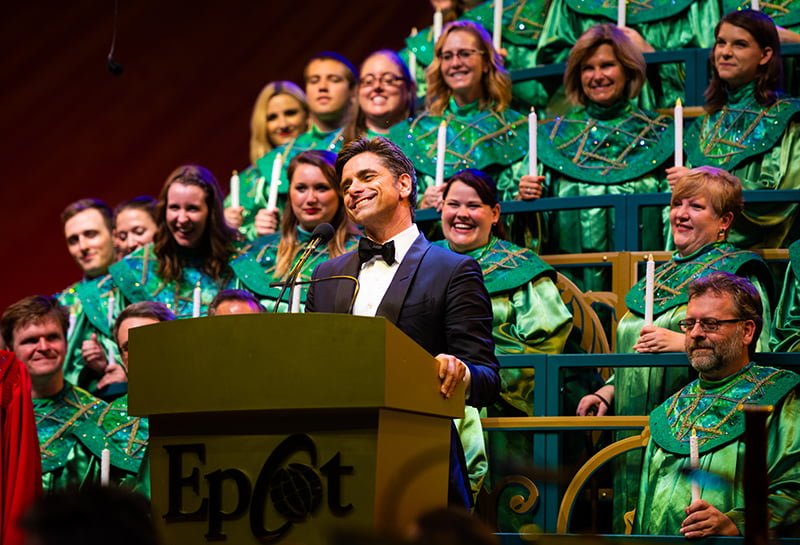 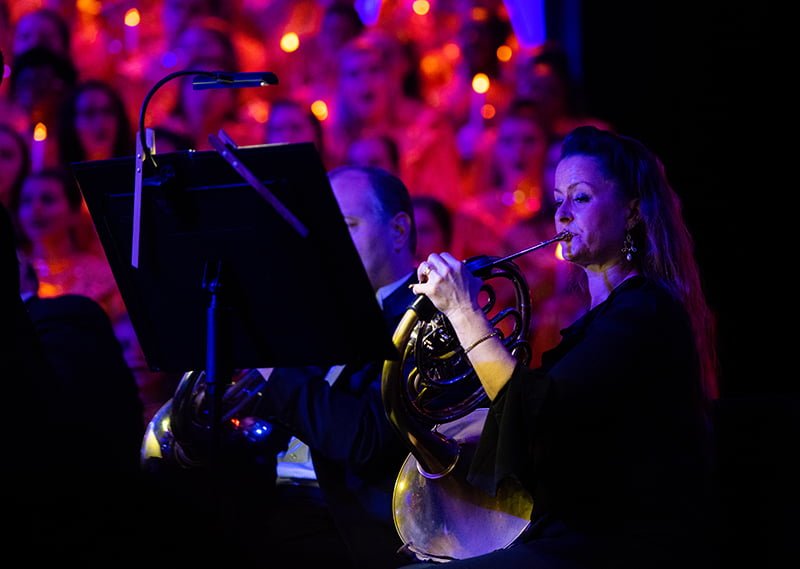 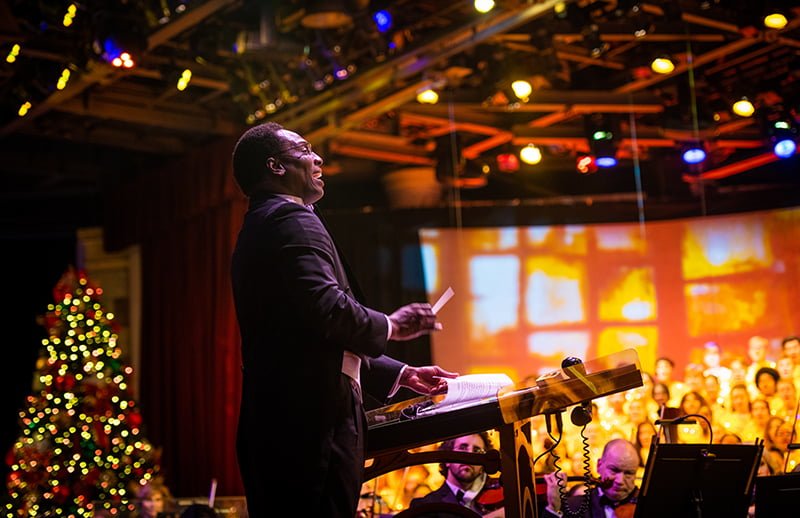 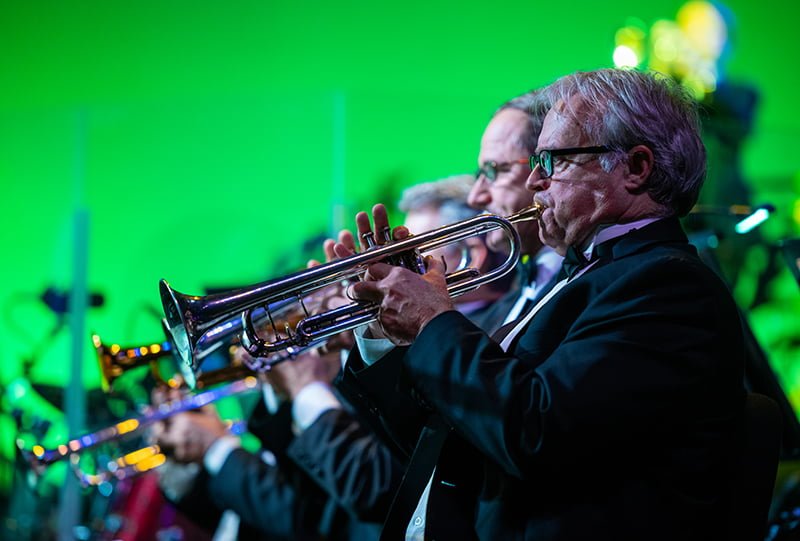 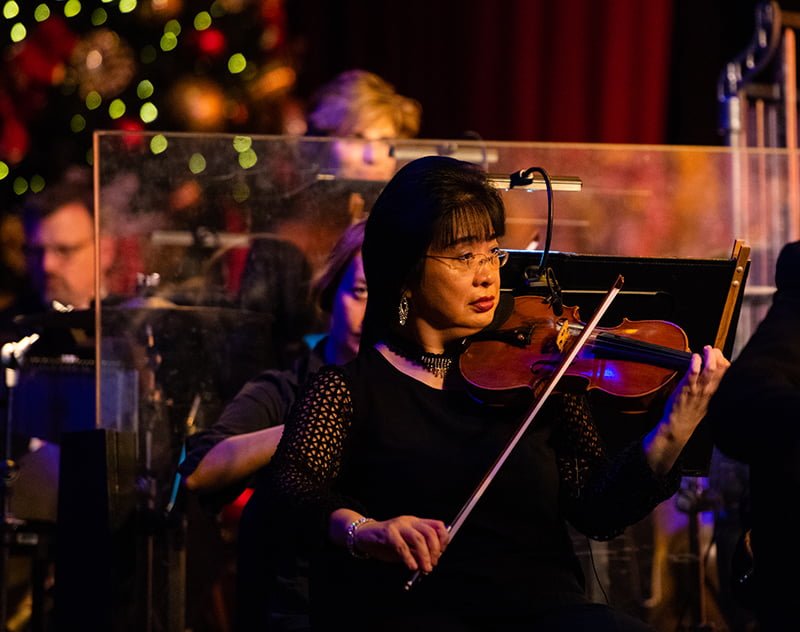 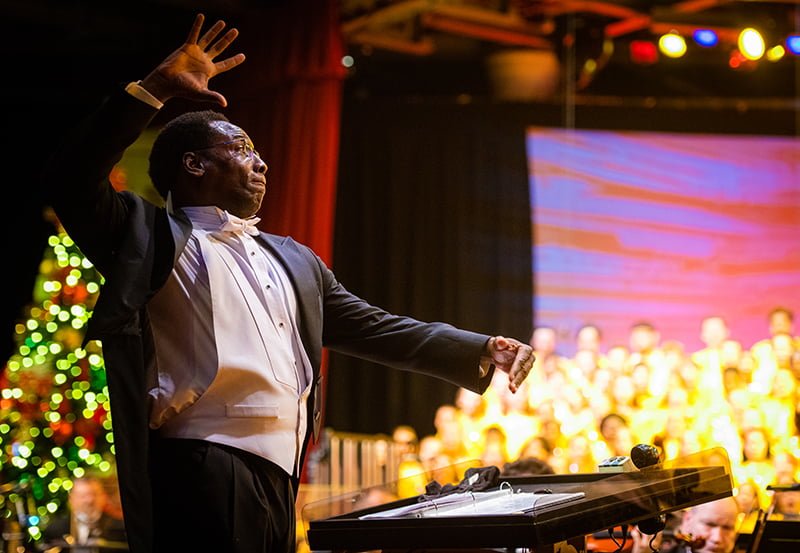 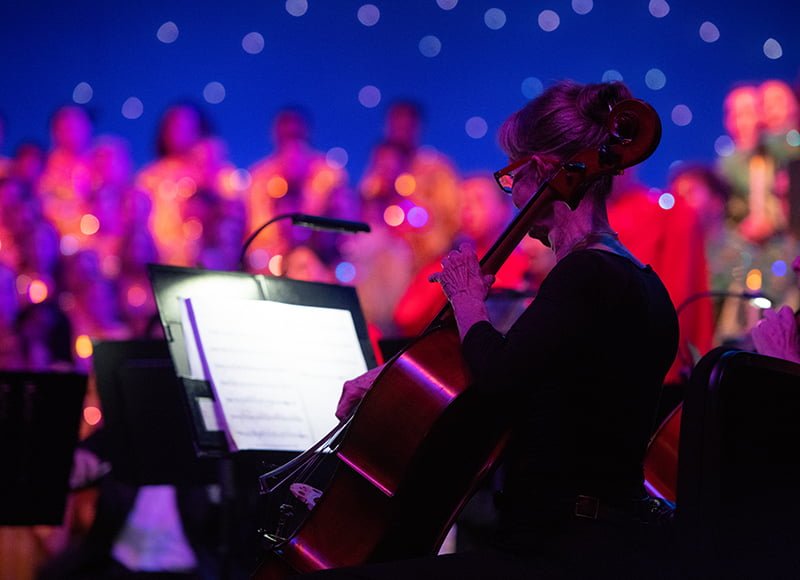 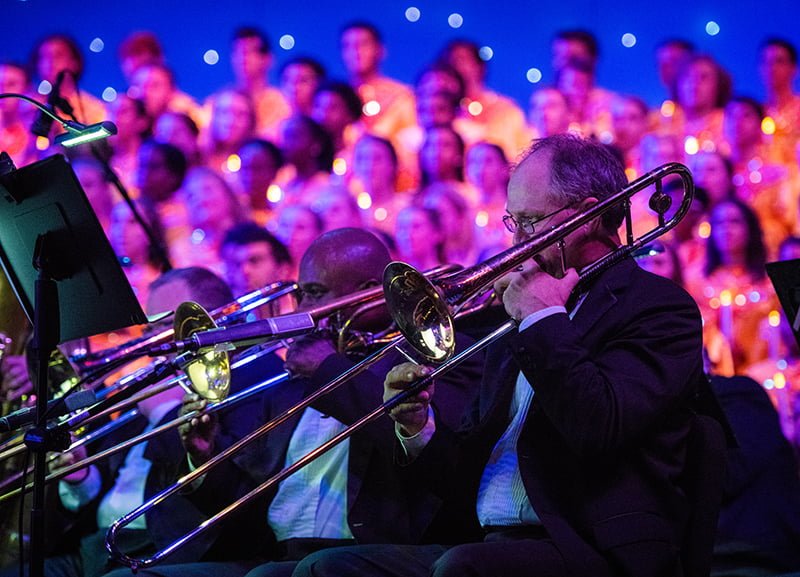 Whether you want to see John Stamos, Neil Patrick Harris, or one of the other popular celebrity narrators, we’d suggest purchasing the Candlelight Processional dining package. You can read about the various options in our Candlelight Processional Info & Tips post. We also shared our favorite dining package choice in our “A Christmas Feast at Epcot’s Biergarten” post.

Failing that, we would not recommend lining up for hours in the standby line. The amount of seating set aside for the dining packages grows every year, meaning the time you need to line up for a standby spot gets earlier and earlier. Instead, consider just watching from outside the American Gardens Theatre. We’ve done this now for a couple of different narrators, showing up ~5 minutes before showtime in both cases.

That’s definitely not the best way of seeing Candlelight Processional, but it’s the least expensive option in terms of time and money. We’d further suggest doing this for the last show of the evening, going on a school night, and aiming for colder weather, if at all possible.

Who is your favorite Candlelight Processional narrator? Or, do you not care about the narrator at all, and focus solely on the beautiful music and story? Any questions we can help you answer? Hearing your feedback is both interesting to us and helpful to other readers, so please share your thoughts below in the comments!