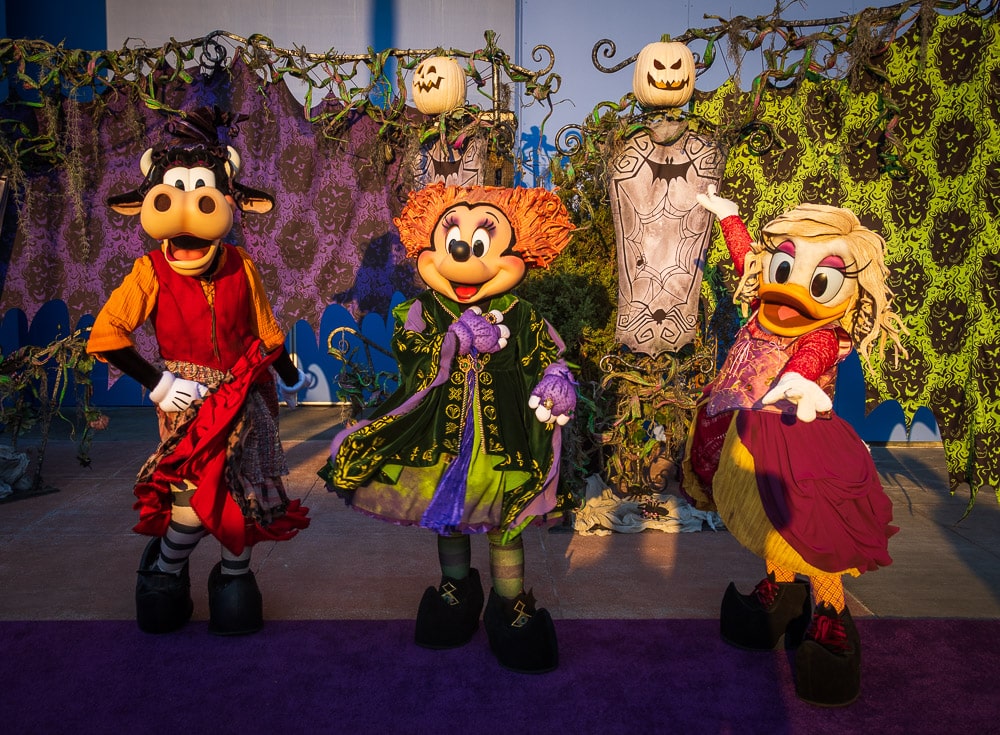 Disney has outdone itself. The newest meet & greet features Minnie Mouse, Daisy Duck and Clarabelle Cow dressed up as the Sanderson Sisters from the movie Hocus Pocus. In this post, we’ll explain how to meet these costumed characters, where they’re located, expected wait times, strategy, and more.

Originally announced by Disney Cruise Line for Halloween on the High Seas sailings, the Sanderson Sister fur characters first appeared at Oogie Boogie Bash – A Disney Halloween Party. This event is held on select nights at Disney California Adventure (DCA) in September and October 2022. Oogie Boogie Bash is a limited-capacity, separately ticketed event that adds family-friendly fun for guests of all ages during Halloween Time at Disneyland.

Oogie Boogie Bash – A Disney Halloween Party offers access to DCA’s rides, spook season entertainment, trick-or-treat trails, and character meet & greets–including Daisy, Clarabelle and Minnie Mouse as the Sanderson Sisters. If you want the basics of the event, thorough details, and whether it’s worth attending, see our Ultimate Guide to Oogie Boogie Bash – A Disney Halloween Party. This focuses exclusively on the Sanderson Sisters meet & greet…

A dedicated post is a lot for a single meet & greet, but I have a feeling there are going to be a lot of questions. Moreover, there’s background explanation that I need to offer beyond what can be covered in a straightforward Halloween party report or itinerary. I don’t think that would do this full justice, as your experience will almost certainly differ from ours.

Let me put it this way: the Sally and Jack Skellington meet & greet at Mickey’s Not So Scary Halloween Party routinely commands wait times of 2-3 hours, and the Sanderson Sisters meet & greet is better than that. As such, I figure spending ~5 minutes to read a blog post that’ll potentially save an hour or more in line is a worthwhile tradeoff. 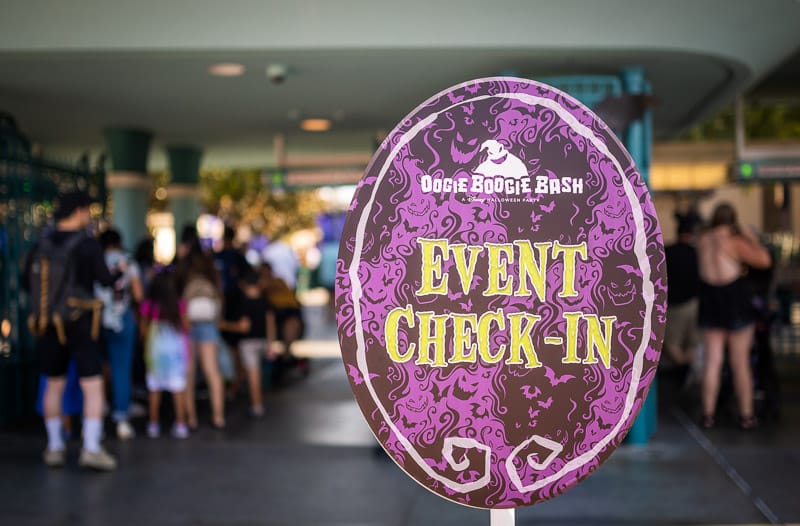 Start by arriving early well before the official 6 pm start time of Oogie Boogie Bash – A Disney Halloween Party. Guests can enter DCA as early as 3 pm, which is 3 hours before the official start time. This isn’t some “secret” or a “hidden hack.” Disney advertises this, and event attendees will line up to enter Disney California Adventure by about 2:30 pm.

Thankfully, you don’t need to do that for the Sanderson Sisters meet & greet. However, you do need to be inside DCA well before 6 pm. Once inside, get your wristband, grab your park map & trick-or-treat bag, and get ready for the spook season celebration… 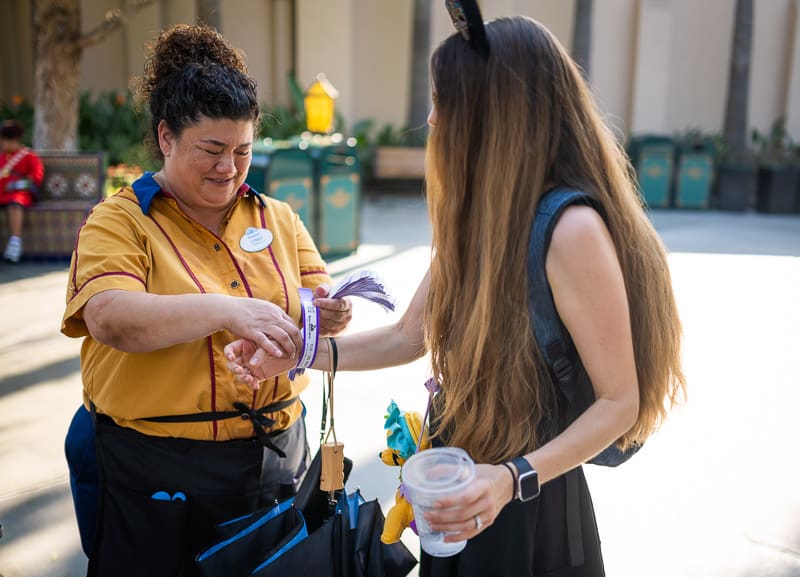 One thing you’ll notice upon reviewing your Oogie Boogie Bash – A Disney Halloween Party event map is that none of the meet & greets are identified. There’s no indication of which characters appear where. Instead, there are a bunch of spots simply marked as “Photo Opportunities” all over the Halloween party map. Very helpful. Thanks, Disney. 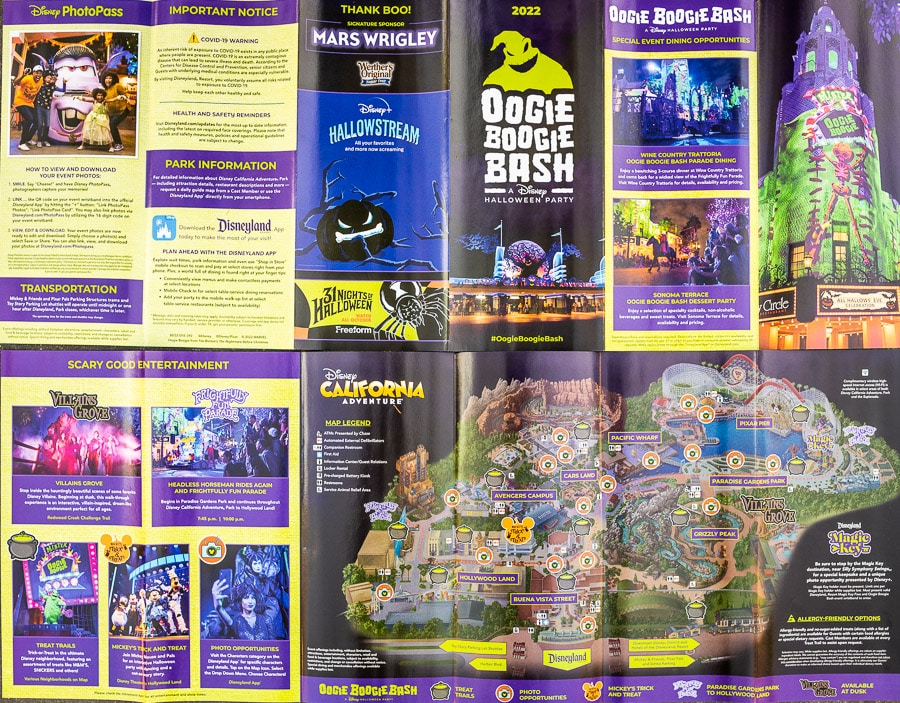 Due to nothing being labeled, any guest armed with the knowledge of which characters appear where is at a strategic advantage. This is because, unsurprisingly not all characters are equally popular. This might come as a surprise to learn, but Chicken Little is less popular than Mirabel. Slightly.

Without knowing where the popular characters appear, most guests don’t know that they are at the party at all unless they stumble upon said characters or learn about them online. This means that characters tucked away in quiet corners of the park see less demand simply by virtue of their location and lack of guest awareness. 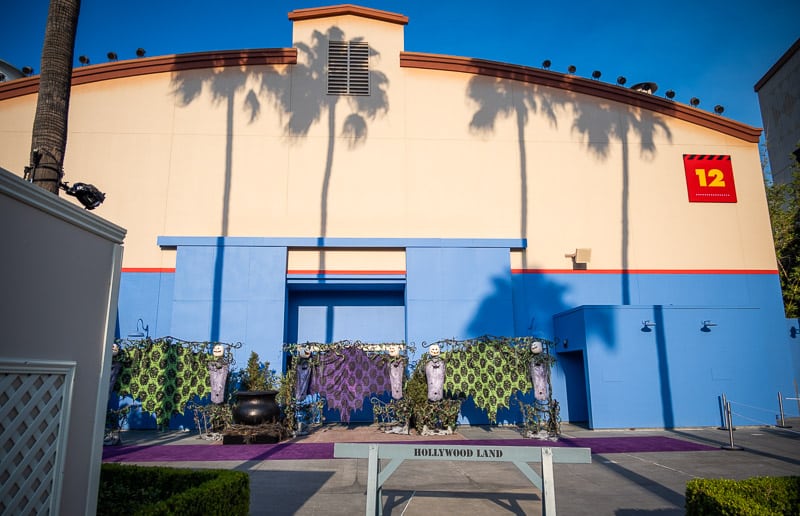 To that point, Daisy, Clarabelle and Minnie Mouse as the Sanderson Sisters appear during Oogie Boogie Bash between Hollywood Lounge and Studio Catering Co., right in front of Soundstage 12. Ah yes, the three most iconic DCA locations. My all-time favorites!

Don’t feel bad if you’re unfamiliar with that trio. Unless you’re a repository of worthless knowledge, you won’t be. We literally just spent an hour in this area last night and have been to DCA dozens of times this year. Yet, I still had to double check the exact names of all three. 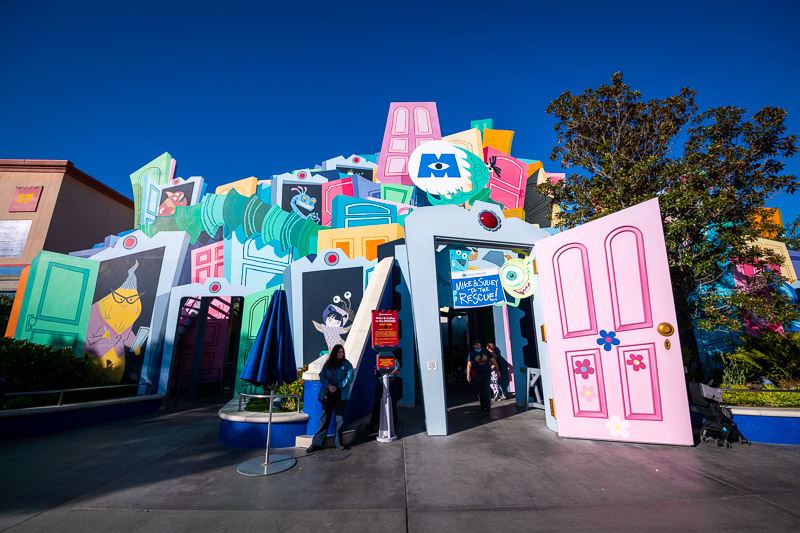 Point being, this is not a popular area of Disney California Adventure once you get past the Monsters, Inc. dark ride. If I had to guess, I’d say this corner of the park gets less foot traffic than anywhere else, even the far side of Paradise Gardens by Boardwalk Pizza & Pasta.

Knowing is half the battle. You now are aware of where Daisy, Clarabelle and Minnie Mouse as the Sanderson Sisters meet during Oogie Boogie Bash – A Disney Halloween Party! 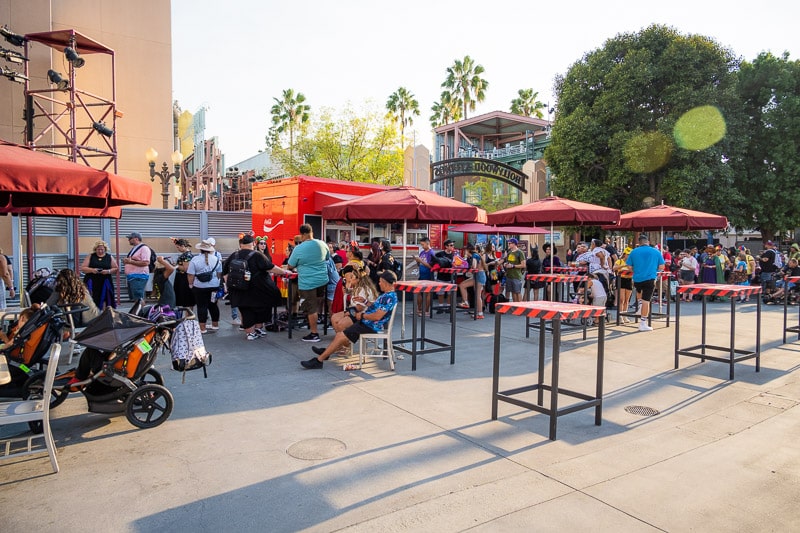 With that out of the way, our recommendation would be to arrive back in this corner of Hollywood Land before 5:30 pm. It’s possible that there will not yet be a line, and Cast Members informing guests that the line will officially form at [insert time closer to the start of the party].

Don’t leave. If guests haven’t already created an informal line, start one. I don’t know why Disneyland does this, but it’s incredibly common for them to not create the “real” line until long after the unofficial one has formed. Sometimes they go a step further, verbally denying recognition of the line.

That was not our experience with the Sanderson Sisters line, but I heard it happening elsewhere in the park and we have experience this phenomenon many times. Fortunately, most guests are pretty respectful and honor the unofficial line. For all of our faults, there is an unspoken code among Disneyland diehards. 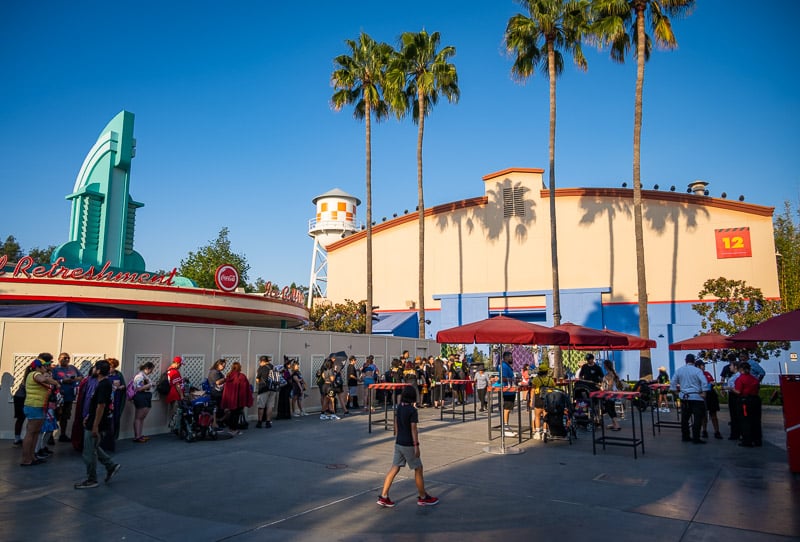 In our case, Disneyland officially recognized the unofficial line at 5:45 pm and relocated it at that time. We were then moved again to the actual queue with switchbacks at 6 pm exactly. The Sanderson Sisters came out a few minutes later and began greeting guests.

The line moved swiftly, and our total wait time was under 15 minutes from the time the Sanderson Sisters first appeared until we met them. It was an incredibly smooth process, taking approximately 1-2 minutes per party. 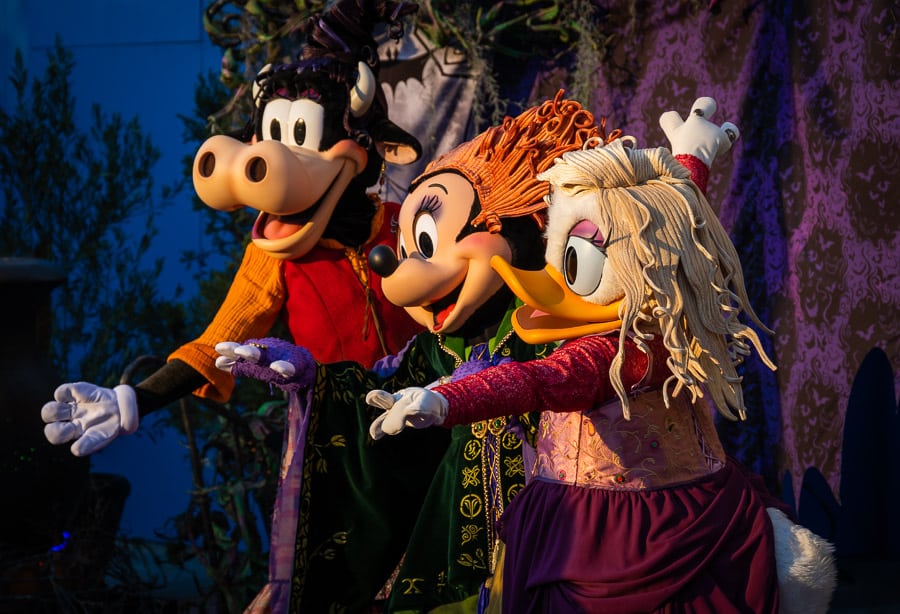 The meet & greet itself was incredibly satisfying, and well worth the wait.

Minnie is dressed as Winifred Sanderson, Daisy as Sarah Sanderson, and Clarabelle as Mary Sanderson. Each embodies their respective character from Hocus Pocus, melding their own personalities with the Sanderson Sisters. 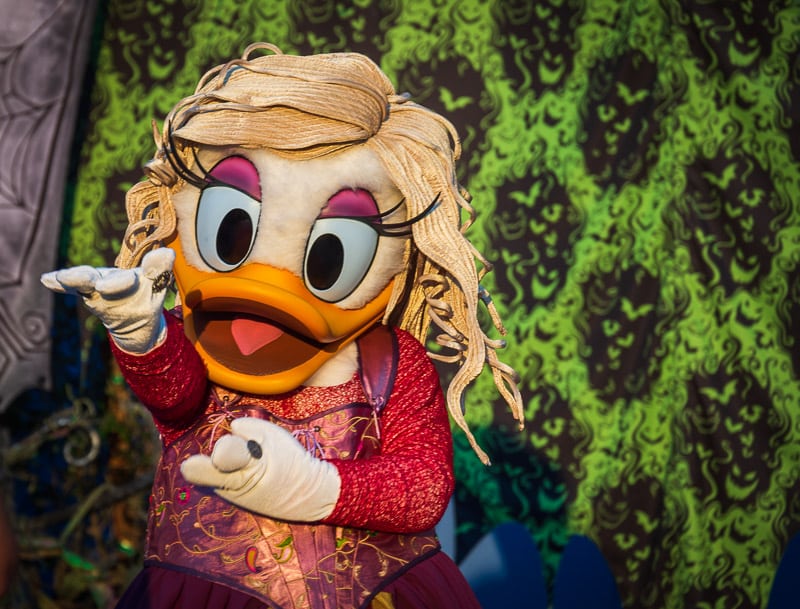 Southern California is in the midst of a record-setting heatwave, and these fur characters were out in direct sunlight dancing, casting spells, and embracing the exaggerated mannerisms of each Sanderson Sister. (The hot weather might’ve also kept lines shorter during our Oogie Boogie Bash night.)

It was impossible to not get caught up in the excitement and energy of the experience. I’m not one who relishes waiting in line, but seeing these characters cosplaying as the Sanderson Sisters and interacting with Hocus Pocus fans was an absolute hoot. Really impressive stuff. 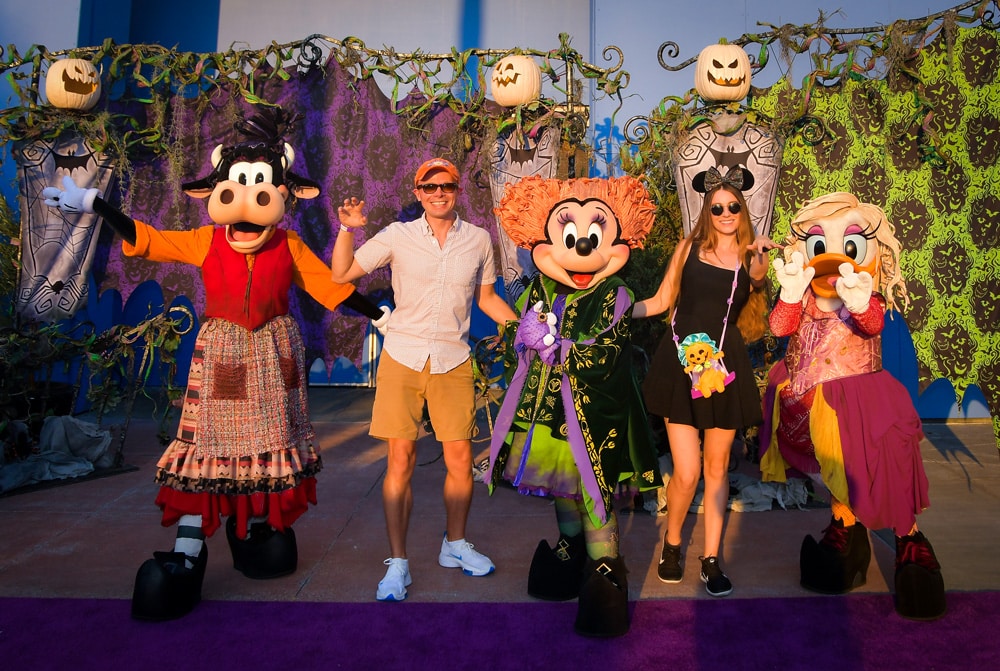 When this meet & greet was first announced as coming to Disney Cruise Line, I thought it was a really clever idea–that whoever thought up the costume ideas deserved a promotion. Never did I imagine that the performers’ would overshadow their outfits. They truly cast a spell on guests!

I’m not kidding or exaggerating when calling this one of the best meet & greets that Disney has ever done. Sarah liked it even more than me, and was “energized” for about an hour after this. 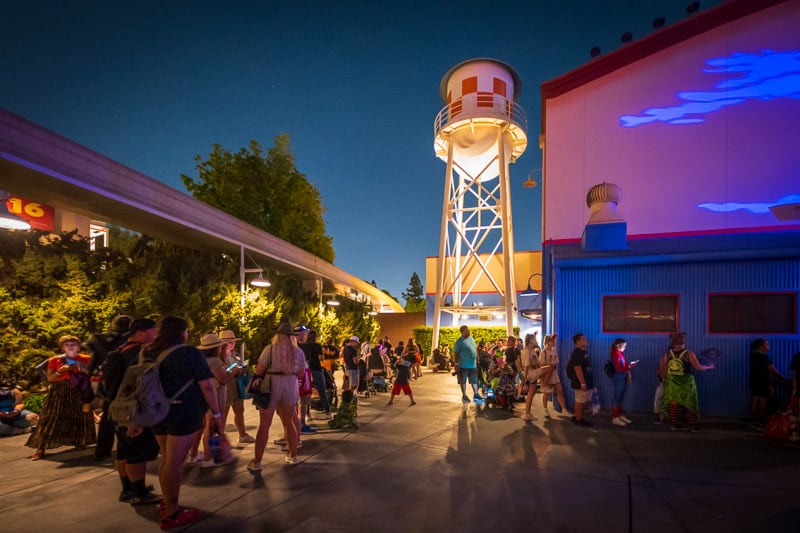 Later during Oogie Boogie Bash – A Disney Halloween Party, we checked on the line again. It had been relocated (presumably due to its length–it was blocking the entrance to Monsters, Inc. Mike & Sulley to the Rescue when we left) but wasn’t too bad. The wait time we were quoted was 45 minutes; in eyeballing the line, the actual wait was probably lower than that.

That sounds great, right? This would seem to suggest that maybe Disneyland locals simply have a lower tolerance for waiting in line for characters than do Walt Disney World fans. That, or the Sanderson Sisters aren’t actually that popular, and Jack Skellington reigns supreme. 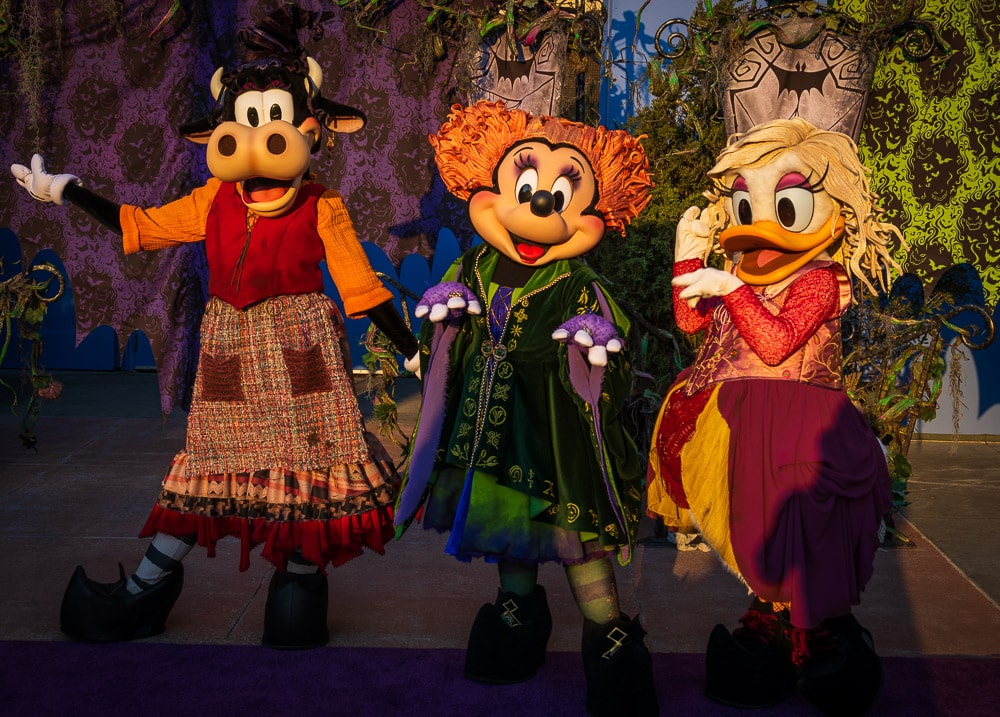 Wrong on all counts. Disneyland fans love nothing more than waiting in ridiculously long lines, and Hocus Pocus might as well be included along with a PSL in the Millennial’s Autumn Starter Pack.

Remember that point about knowledge being half the battle and you now having it? Unfortunately, so does everyone else reading this blog, watching vlogs, seeing social media photos, or any other reports about the first Oogie Boogie Bash. Of course, not everyone will do their homework–most guests won’t–so the Sanderson Sisters’ tucked away location will continue to offer that advantage. 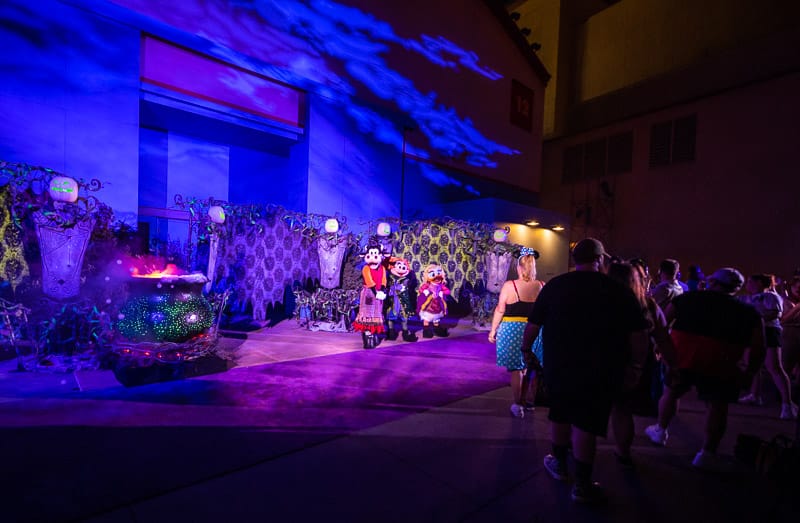 The secret is now out and with each subsequent party, the wait time for the Sanderson Sisters will increase.

I would be willing to bet that these characters average over an hour lines at the D23 exclusive party over the weekend, and hit 2 hour waits by October. That’s simply how word of mouth works when it comes to all things having to do with Disney Parks planning.

Ultimately, our advice for seeing Daisy, Clarabelle and Minnie Mouse as the Sanderson Sisters is arriving at DCA early and lining up before Oogie Boogie Bash begins. How far in advance is a personal decision, but our view is that the time before the Halloween party is less valuable than during the event itself.

Moreover, you should not expect to replicate the ‘success stories’ of us or anyone else who attended night one of Oogie Boogie Bash. As word of mouth spreads, this meet & greet will start commanding longer lines and higher wait times. (Unless we are seriously misjudging the popularity of Hocus Pocus.) With that in mind, we would recommend arriving to this area of Hollywood Land no later than 5:30 pm, and ideally closer to 5:15 pm or even 5 pm if you’ve got nothing better going on.

Another alternative is saving the Sanderson Sisters until the end of the night, and lining up around 10 pm. The problem with this approach is that you risk the line being cut if it’s too long, in which case you won’t be meeting this terrifying trio at all. In addition to that, the lighting is worse at night (the sunset glow right at the start of the Halloween party is perfect) and you’ll be battling the parade crowd to make it over to Hollywood Land at the end of the event.

What do you think of Daisy, Clarabelle and Minnie Mouse costumed as the Sanderson Sisters for Oogie Boogie Bash? If you’re attending the 2022 Oogie Boogie Bash – A Disney Halloween Party, are you planning to line up early to see this terrifying trio? Or, will you prioritize Bruno from Encanto or the Kingdom Hearts characters during the event? Any questions? Hearing your feedback–even when you disagree with us–is both interesting to us and helpful to other readers, so please share your thoughts below in the comments!