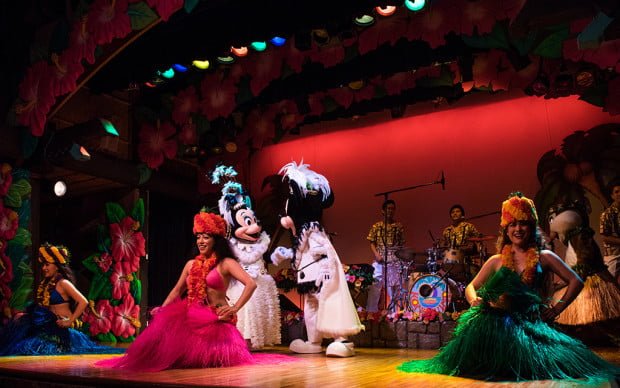 Mickey & Minnie’s Polynesian Paradise is a character dinner show in Polynesian Terrace at Tokyo Disneyland. This post reviews the meal and performance, with a ton of photos of the experience. This popular Disney meal is the kind of thing you book for the dinner show first and food second, so I’m mostly going to let the photos do the talking. If you are considering this during a visit to Tokyo Disneyland or you just like all things Polynesian, you should at least scroll through the photos. The costuming is pretty

In our Mickey & Company Diamond Horseshoe Dinner Show Review we covered basic background info for getting reservations for these hard-to-book dinner shows, so we won’t rehash that here. Suffice to say, they are really popular and must be booked in Japanese.

Fortunately, we have friends in Japan who were willing to book the shows for us, and after how much we enjoyed the Diamond Horseshoe Dinner show, we decided to do the Polynesian Terrace Dinner Show on our recent trip. 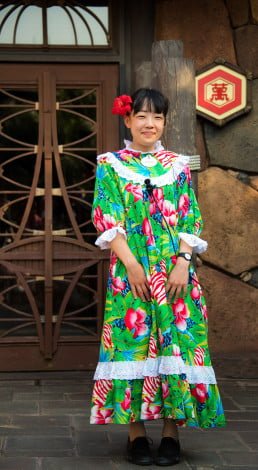 When we arrived at the Polynesian Terrace for our show time, we were greeted by a Cast Member and shown to our table. This time, we splurged for the best view, which ended up being roughly $6 more per person than the worst view. It was well worth it, and made taking photos significantly easier. 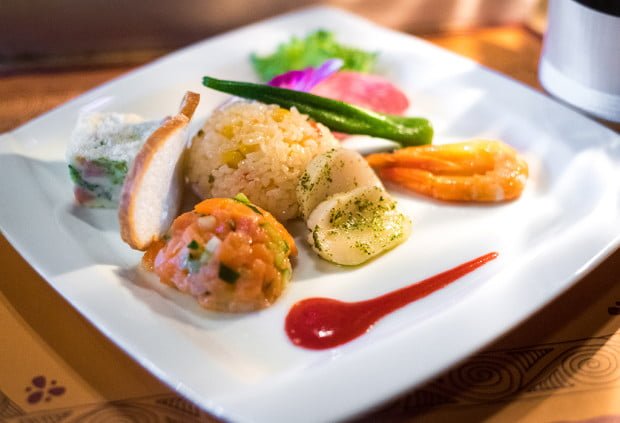 Unlike dinner shows in Walt Disney World, this is not all you can eat. It starts with an appetizer plate, consisting of lomi lomi salmon & trout, rice salad, luncheon meat & coconut cake, shrimp, and marinated scallops. This was pretty good, with that salmon & trout being the highlight, by far. 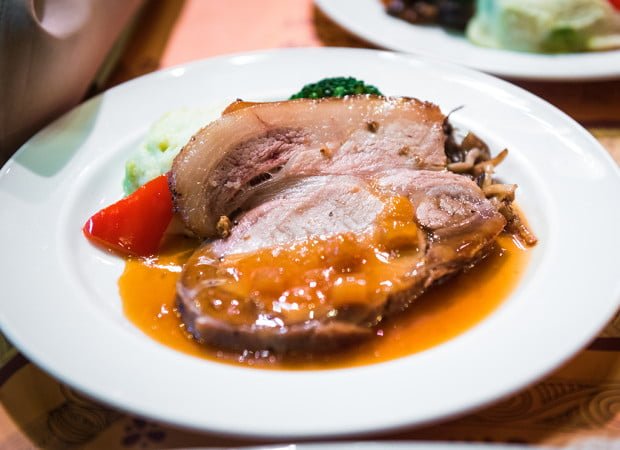 For the main course, there’s roast pork with pineapple Polynesian sauce, avocado mashed potatoes, and sautéed mushrooms. This is one of those things that sounds to die for on paper, and was pretty good, but not as good as I was expecting based upon the description. 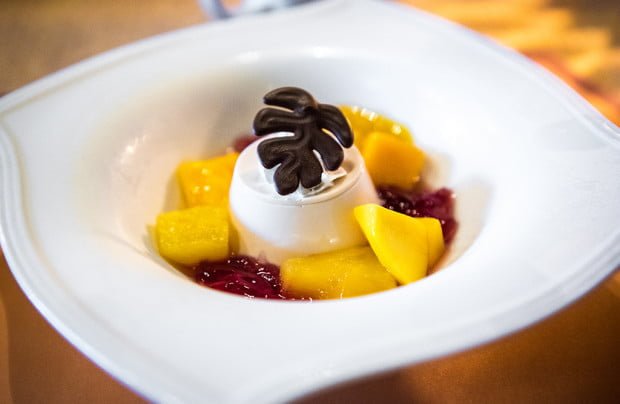 The dessert was nothing special. It was supposed to be a Polynesian donut, which clearly this is not. The meal also came with unlimited Polynesian Punch, and that stuff was the bomb. I don’t even know what was in it, I’m guessing at least pineapple, passion fruit, orange juice, ???, and probably some nicotine or something to make it so addictive. I had like 5 glasses of it.

Overall, I’d say the food was better here than at Diamond Horseshoe. 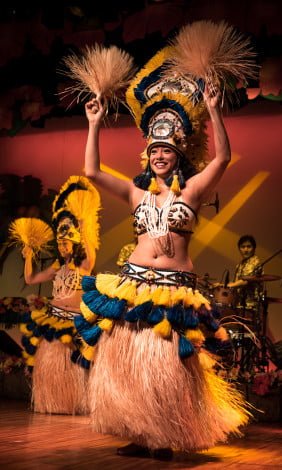 Unlike the lunch show, which I’ve heard is like a character meet & smile more geared towards kids, there is a good amount of authentic hula dancing here.

Mickey & Minnie’s Polynesian Paradise doesn’t really have a story–it’s more about pageantry and showcasing mostly authentic culture of the islands. Even most of the segments featuring the characters fit this description, and once again these characters are excellent performers. Huge kudos to them. 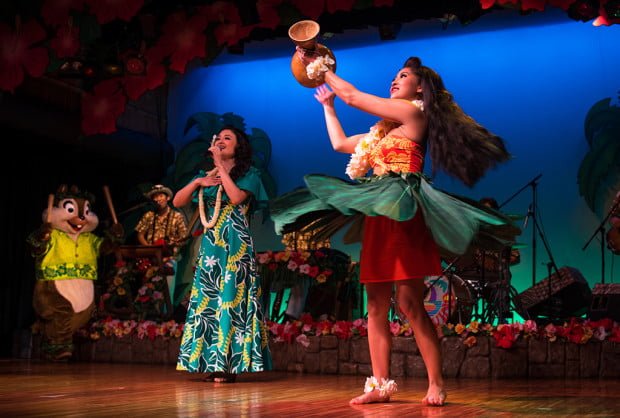 Save for the presence of the characters, Mickey & Minnie’s Polynesian Paradise feels like something you might find at Aulani Resort in Hawaii, which strives for cultural authenticity. 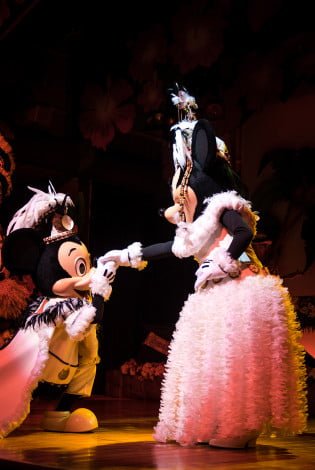 Of course, this being Japan, Mickey & Minnie also get a lot of face time. But look at their costumes!!! 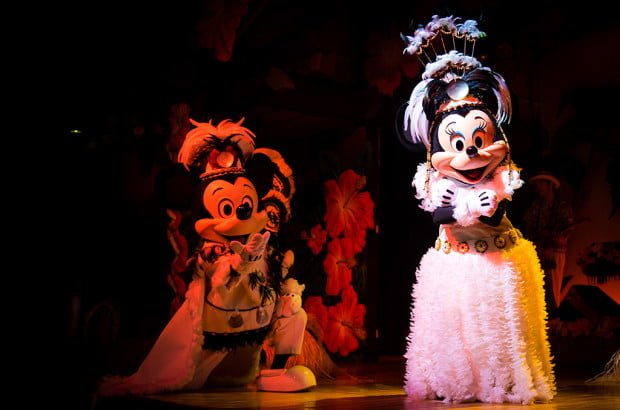 These are arguably two of the coolest costumes ever designed for Minnie & Mickey Mouse. I felt like Mickey might go all Lord of the Flies in there and come out with a pig’s head on stick at any moment. 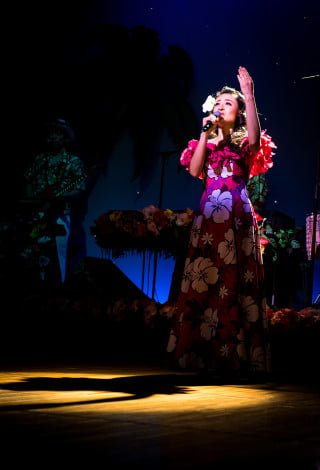 The segments with the characters were balanced well with the dancing and music, I felt. The first half of this show was perfection. 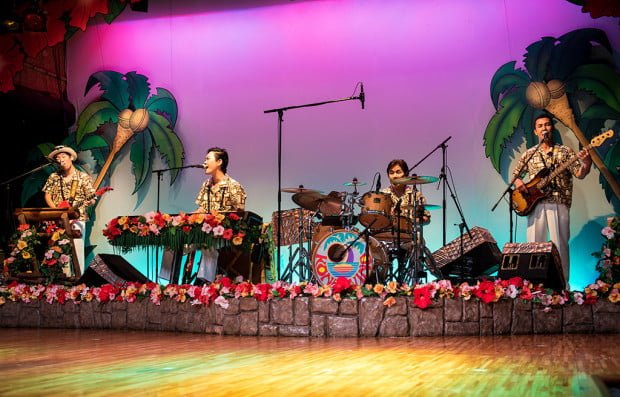 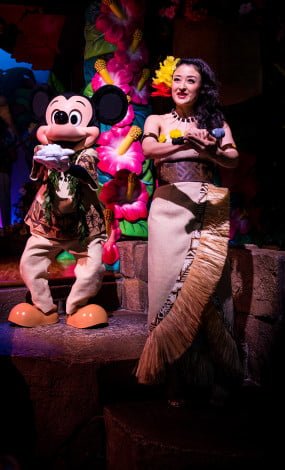 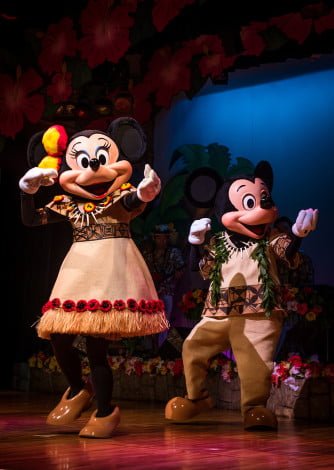 Plus, Mickey & Minnie went from being imposing Polynesian royalty to wearing what appeared to be slightly embellished potato sacks. How the mighty have fallen… 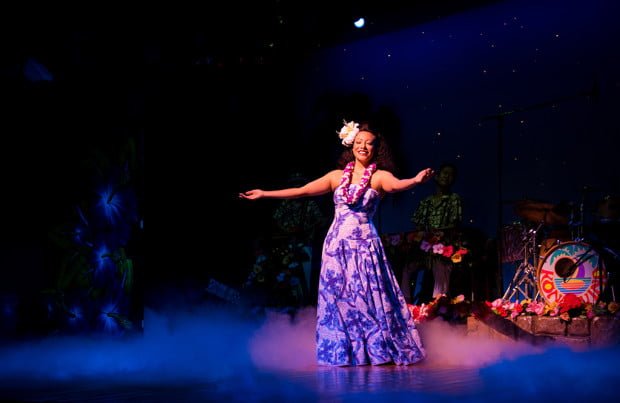 Fortunately, the main female host of the show has an excellent performance with the stage taking on a moody vibe that gets things back on track. 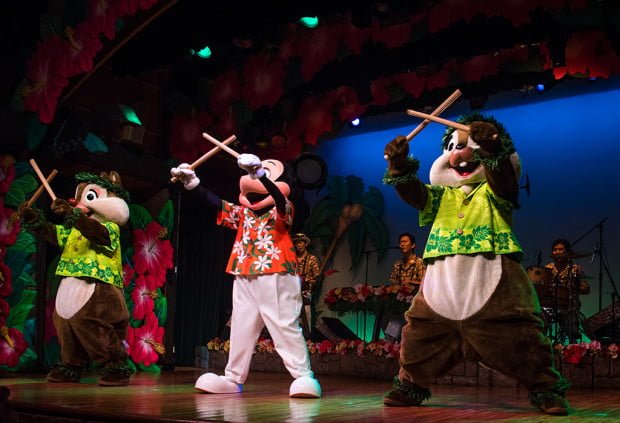 Followed by the characters coming out for their own solid number. As you can see, there are a lot of costume changes during this show. 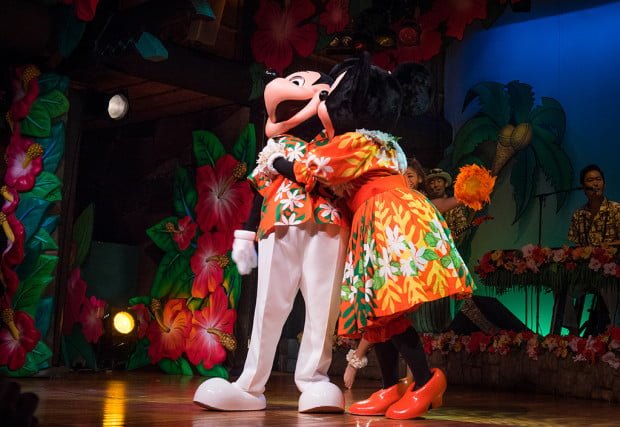 There’s also, of course, the obligatory posed kiss between Mickey & Minnie, at which point you can hear cameras firing like crazy among the audience. 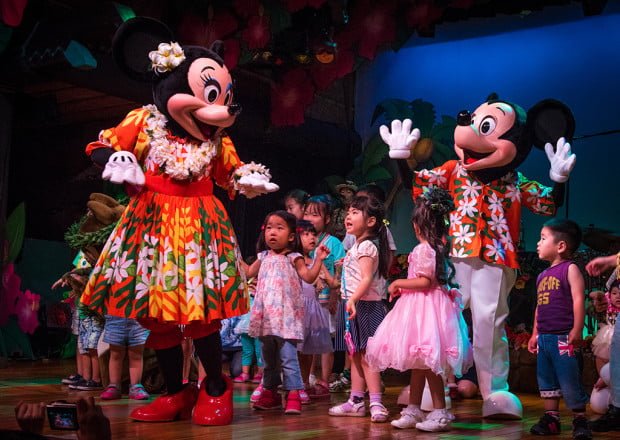 The worst part of the show, I thought, was the two audience participation sequences. You have this really solid show that highlights the excellent dancing and music of the islands, and then you throw kids and men up there that throw a wrench into the whole thing. 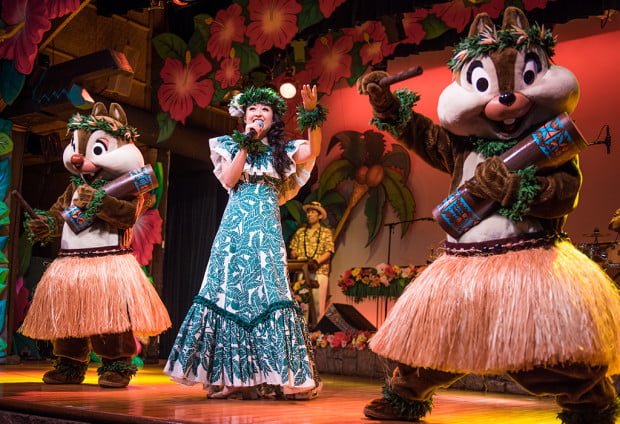 I have nothing against audience participation, but all of those kids on stage looked like they were lost and/or scared. Following that, fortunately, there was another solid segment with both human and character performers that worked pretty well. 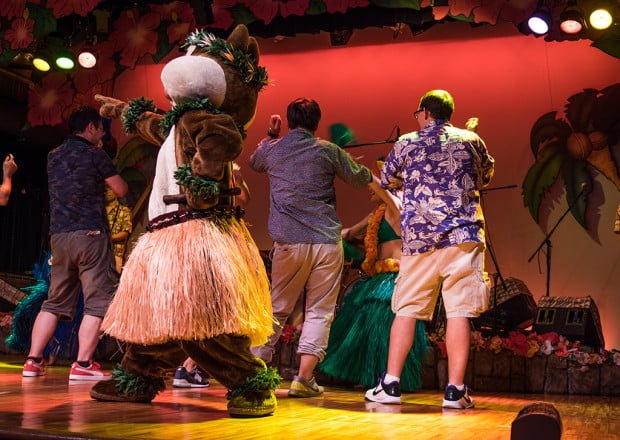 Then, all hell broke loose as the adult male audience participation segment began. 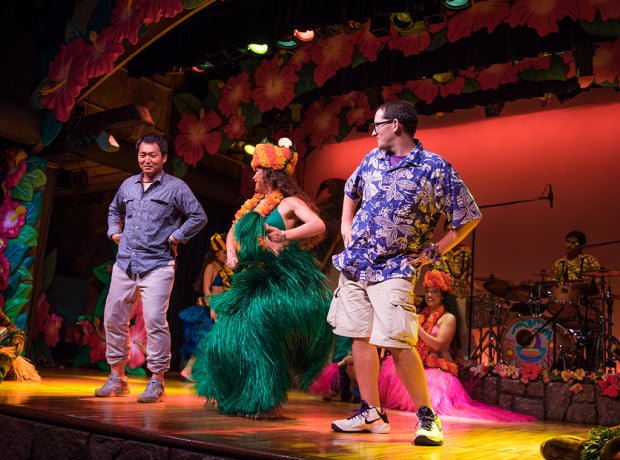 No offense to my homie and noted NWA scholar Guy Selga, who was selected for this, but seeing a bunch of untrained dudes onstage shake their stuff was something I could do without. 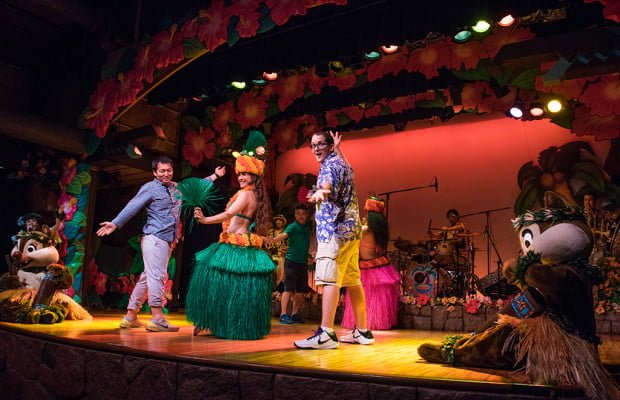 As I write this, Guy is currently in the process of moving to Japan and enrolling at the prestigious Sohei & Wahine Maika`i Hula Studio so that he can take his professional hula act onto the Japanese version of Dancing with the Stars. Follow your dreams, bro! 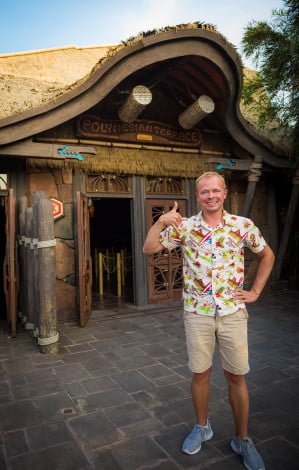 Overall, Mickey & Minnie’s Polynesian Paradise was an enjoyable show with pretty good food. I really liked the first half, which highlighted Polynesian culture through pageantry and musical & hula dancing performances. There were some hiccups in the second half of the show with segments that didn’t work as well, and the audience participation portion was awkward and I would’ve thought it was downright awful if I weren’t so busy laughing at Guy, who let loose and had a ton of fun with it. The lack of a story didn’t bother me, but the disjointedness did. If you’re only doing one dinner show during your visit to Tokyo Disneyland, I’d definitely recommend Mickey & Company at the Diamond Horseshoe over this.

If you found this post interesting, please consider sharing via social media or leaving a comment below. Thanks!

Does Mickey & Minnie’s Polynesian Paradise look fun to you? Do you think Guy Selga will be Japan’s next big hula dancing sensation? Have you seen this dinner show? Want to see it? If you have any other comments or questions, post them below and I’ll try to answer!