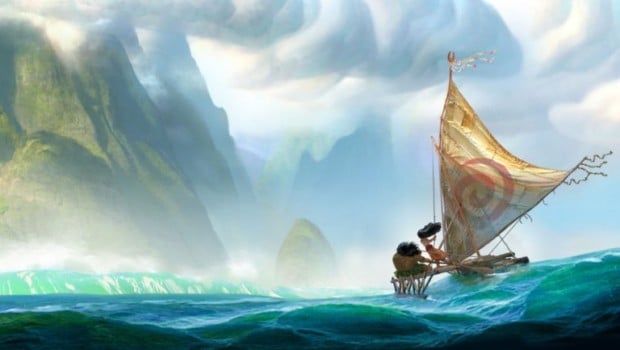 We were late to the punch in seeing Moana, as we were traveling when it was released, and then didn’t get around to seeing it until it seemed a stand-alone film review was a bit stale. However, the movie made a pretty big impact on us, so I thought it might be worth covering it briefly before reviewing the blu-ray.

First of all, I think Moana was last year’s best animated film. If you recall all of the praise I heaped upon Zootopia in our review of that, this might come as a surprise. Well, two things happened subsequent to that. Moana was released and I was absolutely blown away by it; and, I read more critical analyses of Zootopia.

Let me preface this by saying that I still really enjoy Zootopia, and I’m not fully sold its critiques. At minimum, though, they present interesting food for thought, and demonstrate how the message is a bit muddled. I think the filmmakers unquestionably had good intentions, and presenting a nuanced allegory in the space of an animated film. Irrespective of any missteps, it’s a thought-provoking movie–and one that engages in some beautiful world-building.

More significant than that in my view that Moana was the best animated film of last year: Moana was simply better.

Moana continues the tradition of Frozen in portraying its heroine in a more empowered light. I’ll admit that I was not the biggest Frozen fan (it’s a good film, but it wouldn’t top my list of Walt Disney Animation Studios’ second renaissance-era films), and found this story to be more captivating, with catchier songs.

I think Disney is moving in a fresh direction with a princess film that looks nothing like a traditional princess film. Unlike Frozen, which teased a romance only to flip the script on that idea (to its credit, in its own unique way), Moana dispenses with romance entirely.

In so doing, it also tackles the issue of representation, which has been a growing point of contention for Disney in recent years. The end result is a film that treats viewers to a slice of Polynesian culture (albeit not without its own critics) in a powerful and visually-stunning story. The destination is a bit predictable and there are some pacing issues, but it’s mostly a treat from beginning to end, and it’s a lot of fun to watch the journey unfold.

Just as important to someone who grew up during the first Disney Animation renaissance and wore out my cassette tapes of those movies’ soundtracks, but the songs (by Hamilton’s Lin-Manuel Miranda, Mark Mancina, and Samoan singer Opetaia Foa’i) are incredibly catchy, humor-laden ear worms. I know this is highly subjective, but Moana’s music does far more for me than Frozen‘s. I’ve already listened to “Shiny” (my favorite) more times than any adult should probably acknowledge, and “You’re Welcome” (voiced by intergalactic treasure, The Rock) makes me laugh every time.

The end result is a movie that dethrones Princess and the Frog as my personal pick for the best Disney animated film of the last decade, and secures its place a rung above Zootopia. Between these two films and the also-excellent Kubo and the Two Strings, it was a very good year for animation. (I also enjoyed Finding Dory, and bet that would have been better received by fans and critics were it not a sequel to one of Pixar’s top films.) 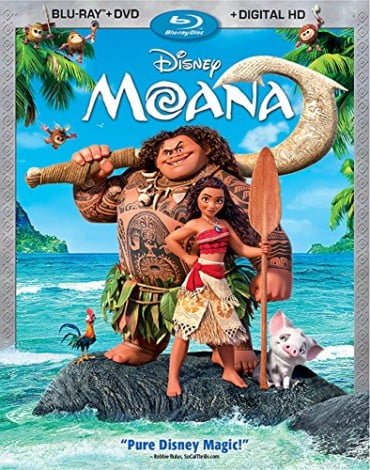 Alright, moving on to the Blu-ray. Both the video and audio quality of this release are excellent. Pretty much exactly what you’d expect for a Disney release of this caliber. The vibrant, cool colors of the ocean really pop, and every texture is crisp. It looks nothing short of stunning.

For the Blu-ray, the audio mix is Disney’s DTS-HD Master Audio 7.1 mix, and it sounds incredible, immersing you in the sounds and songs of the voyage. I’m sure our neighbors will disagree, but this is a movie that is meant to be watched on a giant screen and with the sound cranked.

Now, the extras. Given my obsession with the music of Moana, I started by watching “They Know the Way: Making the Music of Moana.” Clocking in at 12 minutes, this provides some insight into the collaboration of Lin-Manuel Miranda (who signed on before making it big with Hamilton), Mark Mancina, and Samoan singer Opetaia Foa’i. It briefly covers their travels to find inspiration, and record in New Zealand. Interesting, but too brief given how central music is to the film.

A more substantive look into the making of the film is “Voice of the Islands,” which is 31 minutes long, and details the trip the directors made to the Pacific Islands. It also features members of the Oceanic Story Trust that provided guidance on the project to ensure it was culturally authentic. This definitely enhances my appreciation for the film. (The Art of Moana does likewise, showcasing the cultural inspiration in the art design, right down to the smallest details.)

There’s also the short (Inner Workings) that ran before Moana in theaters, 25 minutes worth of deleted scenes, a quick look at the historical inspiration for costuming in the film, Maui Mini-Movie: Gone Fishing, two rapid-fire Q&As, and deleted song, and audio commentary.

It’s a pretty solid slate of extras. My one disappointment is that there aren’t music videos for every song. Now, I’m not singing I’d rock out to these videos, sing-along style myself, but I’m guessing this is something kids would love.

All things considered, Moana is a must own. Just like all of Walt Disney Animation Studios’ films from the last 10 years or so. Not only is Moana a really good movie, it’s a really re-watchable movie. It continues to astound me how the fortunes of the studio have once again been reversed (I’d put their recent work above Pixar!), and Moana sets a bar that will be tough to top.

Do you agree or disagree with our take on Moana? Would you put it ahead of Zootopia in terms of last year’s animated films? If you own the Blu-ray, what did you think of the extras? Share any questions, tips, or additional thoughts you have in the comments!