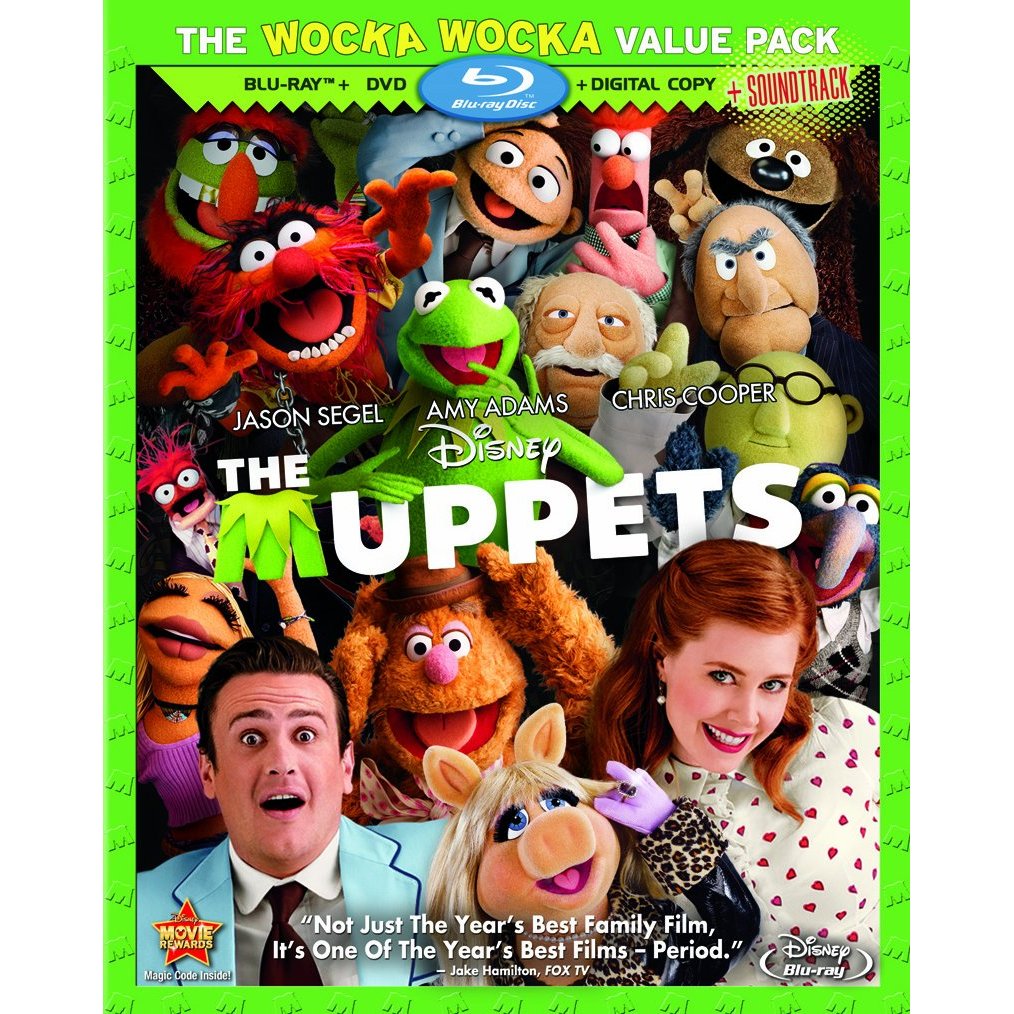 might be the most highly anticipated Blu-ray of the year for many reading this. This site is read mostly by Disney theme park fans, and many (most?) Disney theme park fans are also huge Muppets fans. I number myself among such dual fans, and MuppetVision 3D at Disney California Adventure and Disney’s Hollywood Studios has long been one of my favorite attractions as it flawlessly combines these two areas of fandom.

If you’re in this crowd, you probably already saw The Muppets in theaters. Surprisingly, I did not. We intended to go, and even planned on it multiple weekends, but those plans never came to fruition. It was a busy winter for us, and we rarely make it to the theater, anyway. I did watch with a keen eye as reviews started to trickle in, and were resoundingly positive.

With these reviews in the back of my mind, I have to admit that I was a little disappointed by The Muppets. While definitely a good film and a fun entry into the Muppets film canon, it seems a tad superficial, with somewhat weak character development and a story that isn’t well-paced or properly concluded. Too much time is spent on set-up and giving cursory introductions to each character and not enough time is spent on actual delivery and tying up the loose ends.

At the same time, I can hardly take fault with Segel and co. for approaching the film as a bit of a crash course in the Muppets. This film is a franchise reboot through and through, with the goal of introducing a new generation to the Muppets. Because of this, it seems that the unique brand of Muppet humor isn’t as fast-paced as it normally would be, although the film is still quite humorous. I’m no writer (regular readers of this blog are probably well aware of this fact!), but I would have thrown the audience right in the center of the Muppet universe and let the history and attitude of each character come through organically during the course of the film. This is the approach of MuppetVision 3D and its pre-show, and I feel that works incredibly well there.

My other qualm is with the story, but given the very self-aware jabs the film makes towards its own simplistic plot, I think the clear intent here was to go with a simple story so the re-introduction of the Muppets characters can take center stage. Still, the pacing is off and the end seems rushed without the payoff the viewer deserves. Jack Black also seems like an interesting choice for the telethon host, especially with both Neil Patrick Harris and John Krasinski present. I can understand not wanting to make the film into “the Muppets meet the cast of How I Met Your Mother,” but it still seems like someone more timeless or presently relevant than Jack Black could have been chosen for that role.

Don’t let the above remarks fool you, though, The Muppets is an incredibly fun film that I enjoyed a great deal. More than anything, it’s good to have the Muppets back!

Had I seen the film without knowledge of its impressive score on RottenTomatoes.com, I’d probably be doing nothing but singing the film’s praises here. The best thing that Segel (a self-professed Muppets junkie) and Disney did with this film was stay true to the source material and lineage of the Muppets. The Muppets are, as they should be, puppets with a unique brand of humor. There are plenty of jokes and gags that land, and pre-release concerns that Segel’s script wasn’t true to the source material (I recall reading some remarks about the ‘fart jokes’) were totally unfounded. The newest Muppet, Walter, is a great addition to the gang, and most of the songs work really well. “Man or Muppet” is an incredible song, the new ‘occupations’ of the Muppets are mostly hilarious, and 80s robot is a fun addition to the movie that had me in stitches. Best of all, in my opinion, was the performance of “Rainbow Connection.” I got goosebumps seeing that performed, and it’s the most poignant reminder in the film that the Muppets are really back, and just as strong as ever.

The video quality is flawless, with textures and detail rendered perfectly. Its only fault is that it really makes me wish The Muppet Movie

and The Muppet Christmas Carol

would come to Blu-ray. I’m not sure this is a real criticism of the video quality of this film, though. The quality here being ‘too good’ doesn’t seem like a critical comment.

Disney’s DTS-HD Master Audio 7.1 surround sound track brings down the house with a perfectly-balanced and immersive soundtrack. Much like the video, it’s flawless. Crank up the audio when viewing. Animal and the whole Electric Mayhem Band will approve.

The extras here are a mixed bag. I expected quite a bit given all of the effort put into the online marketing of the film and YouTube videos that have been released for years prior to the film’s release (though not directly related to the film, is there any reason why these couldn’t have been included?). The spoof trailers are fun, but everything else is disappointing, with one notable exception. The audio commentary is a real let-down, as the contributors go out of their way to force the humor. The deleted scenes are okay, but nothing that shouldn’t have been cut from the film. The bloopers are at times humorous, but at other times they seem like scripted “outtakes.” The notable exception, though, is “Scratching the Surface” a ‘hasty’ making of documentary that really doesn’t document the making of the film, or the history of the Muppets, but is still incredibly hilarious and filled with Muppets-humor. It’s rare for me to want to watch a special feature again and again, but that’s exactly how I felt after seeing this. I wish it were a bit longer than its 16 minute run-time, but this shorter duration makes it easier to justify watching and rewatching a special feature. I won’t go as far as to say that this compensates for the otherwise lackluster special features, but it is a real diamond in the rough.

Overall, you probably didn’t need my review to know that this is a must-buy. You probably pre-ordered this Blu-ray months ago. As noted at the outset, this review concerns the The Muppets Wocka Wocka Value Pack

, which includes a Blu-ray, DVD, digital copy of the film, and code to download the entire soundtrack of the film. There’s also a The Muppets (Single-Disc DVD + Soundtrack Download Card)

version, but at only $6 less, I think purchasing the Wocka Wocka Value Pack, even if you don’t yet own a Blu-ray player, is the best way to go. Purchase The Muppets on Blu-ray today–to not do so would be distinctly unpatriotic!