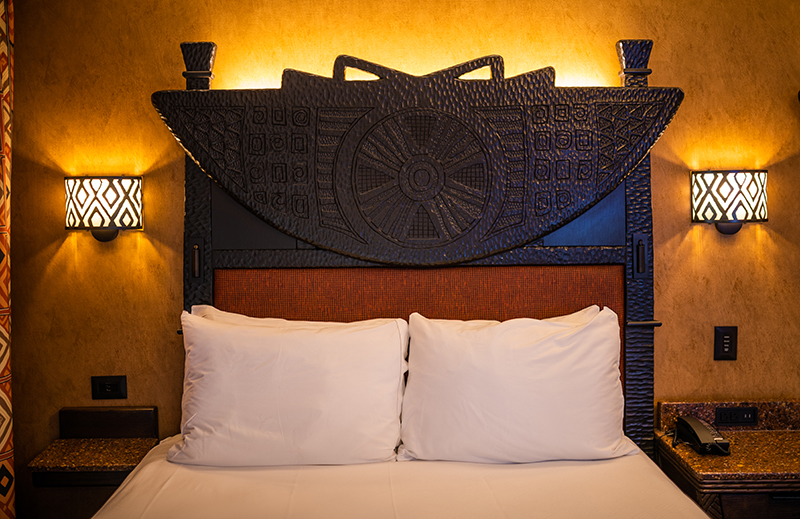 Animal Kingdom Lodge – Jambo House is one of the latest resort room reimaginings, with the hotel rooms recently redesigned. This was one that had us concerned, as AKL is an exemplar of themed design, and the old rooms continued Imagineering’s great work that can be found throughout the rest of the hotel.

Despite this, many casual guests and even Walt Disney World fans were critical of the Jambo House guest rooms. While thematic integrity is great, rooms also serve practical purposes and need to be a pleasant space for guests to decompress, get ready, etc. Unfortunately, many Walt Disney World visitors found the old rooms at Animal Kingdom Lodge – Jambo House to be dark and dreary, with a dated appearance. For our part, we mostly loved them–but also could understand all of this criticism.

We were nevertheless apprehensive when hearing that Jambo House would get new rooms, as Disney’s track record with recent redesigns has been hit or miss. Some reimagined resort rooms have been excellent, balancing form and function; others have been bland or sterile, which is the exact opposite of AKL. 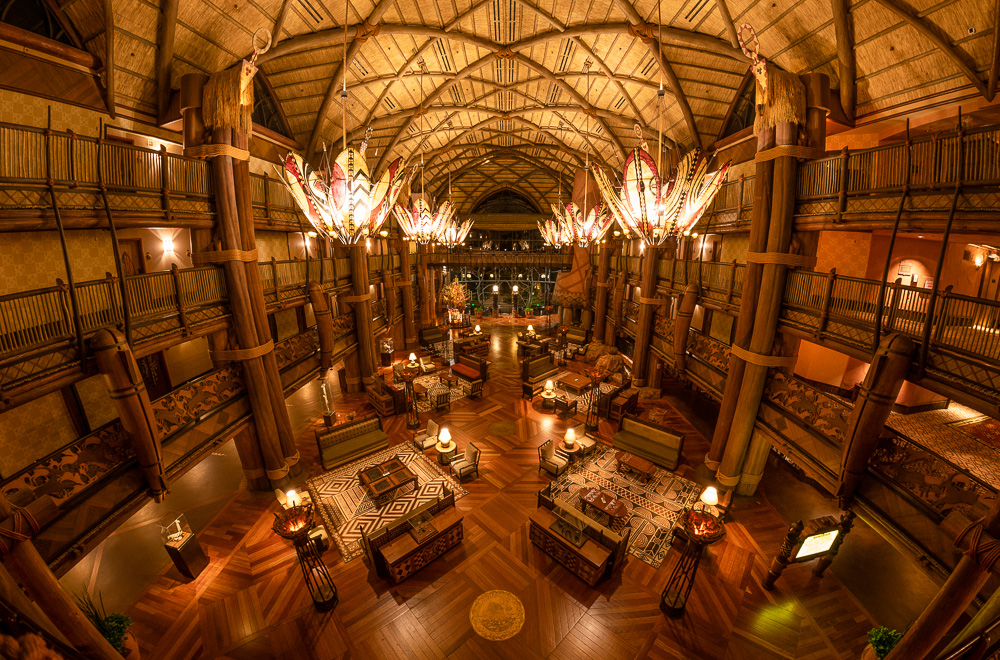 In a way, it’s unsurprising that Animal Kingdom Lodge – Jambo House would receive excellent and thoughtfully-done new rooms. This is because Animal Kingdom and its adjacent resort are two of the last bastions of consistency and integrity in themed design at Walt Disney World. Typically, Imagineering gives special care and consideration to its projects at Animal Kingdom as a result.

From a thematic perspective, these are arguably the strongest park and resort in Florida. I don’t know if this is just in my head, or if Jambo House and Animal Kingdom have a ‘guardian angel’ high up in Imagineering (perhaps having a name rhyming with Bro Bologna). When it comes to Animal Kingdom, it seems like even the thematically incongruous projects (like Pandora – World of Avatar) are done with a deft hand and thematic integrity. 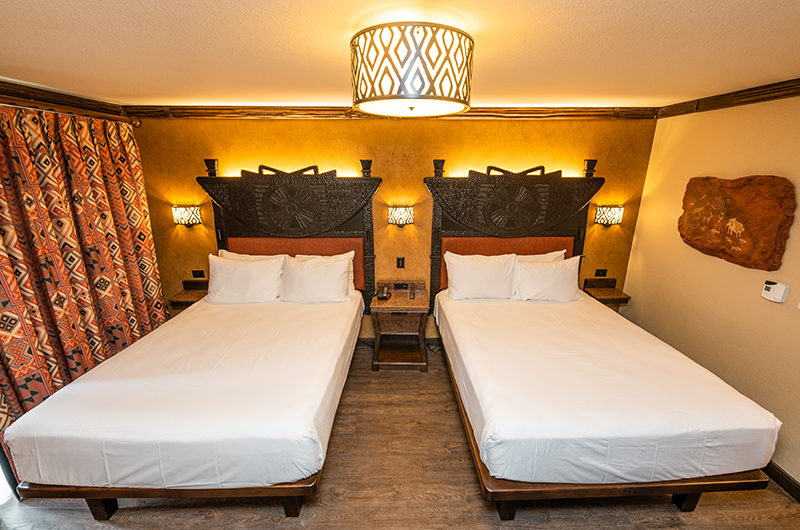 Before we get into the good of the new rooms at Animal Kingdom Lodge – Jambo House, let’s start with the bad. There are some things that we’re guessing many of you won’t like, including us. The first is our obligatory complaint about the lack of a bed runner. This “industry standard” move was to be expected, even though a handful of Disney Vacation Club resorts have somehow managed to elude the bed runner police.

Next is the laminate floors that are meant to give the look of hard wood flooring. We are torn on this–when done nicely and properly maintained, carpeting is my preference. However, it gets worn too easily and quickly at Walt Disney World, so I’m fine with this change. 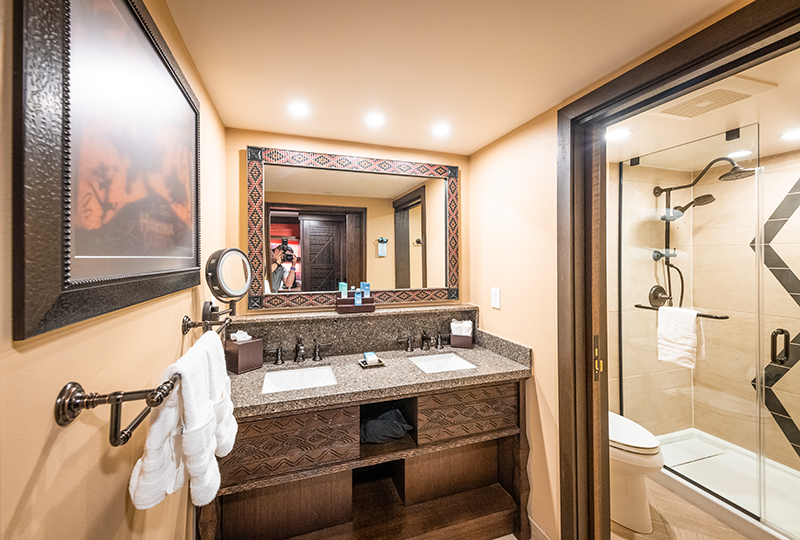 Finally, walk-in showers instead of bathtubs. I’m 100% on board with this change but, then again, we don’t have kids. In any case, all of these changes were inevitable, so it’s hard to fault Animal Kingdom Lodge too much for changes happening everywhere else.

Okay, now the big changes unique to Jambo House’s new rooms, almost all of which are good… 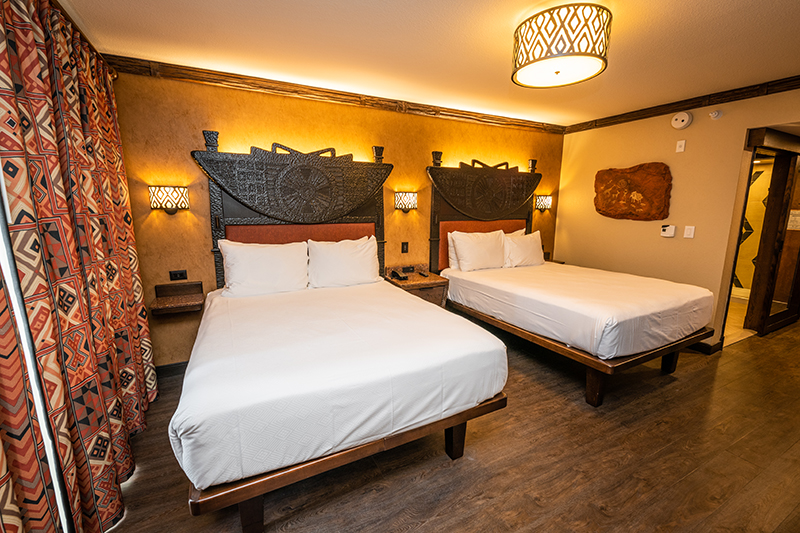 Headboards previously were quite similar to the current carved design, but lower to the head and with linens draped from the ceiling behind them. The new look maintains the authentic African look, but is more robust and substantial.

They’re also an upgrade in terms of lighting. Now, in addition to the bedside sconces, there’s also uplighting from the headboard itself and ceiling lighting along the (also new) ceiling trim. 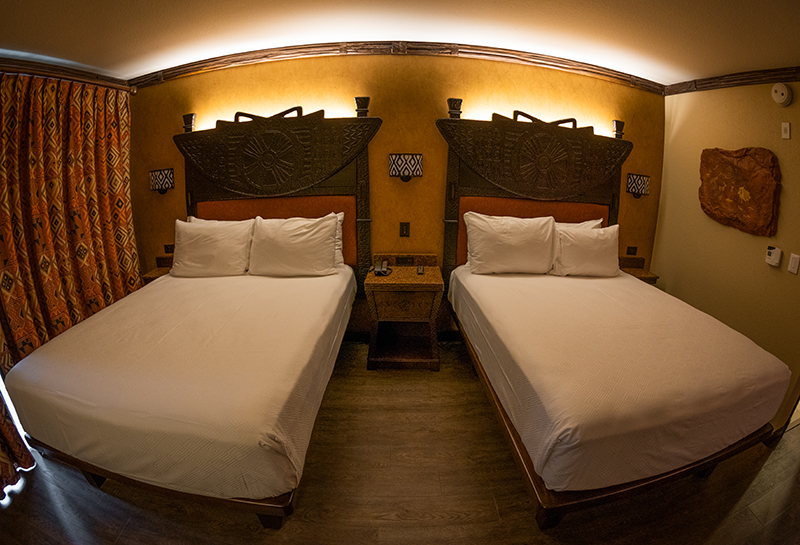 It’s tough to adequately convey the lighting via photos, but here’s how the room looks with all of the lights off except for the uplighting and ceiling.

I’m a total sucker for moody lighting, so this scratches me right where I itch. It’s wonderful. Perfect for late nights while watching television or if someone is (trying to) see animals on the safari from the balcony. 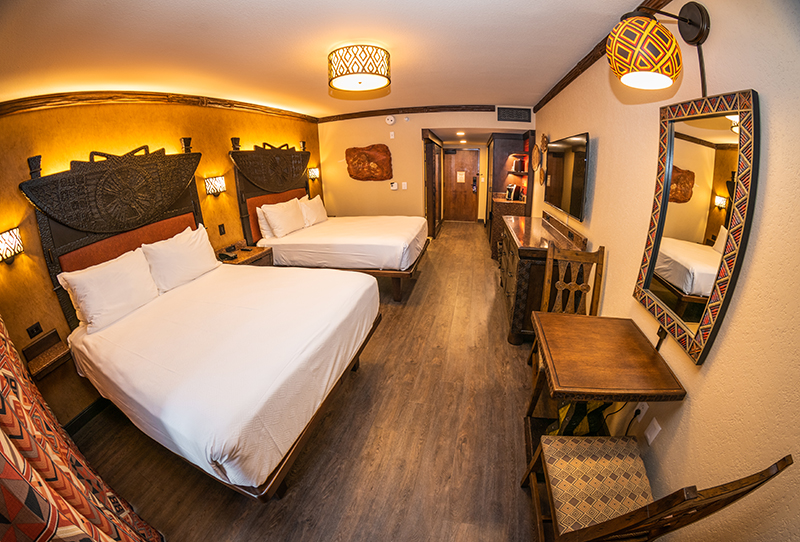 Here’s a wider view of the room, once again with all of the lights on.

There is a lot going on here, both in terms of texture and design, but it’s never too much. (Imagine that–our concern with a new room design is whether it’s too much instead of too little!) 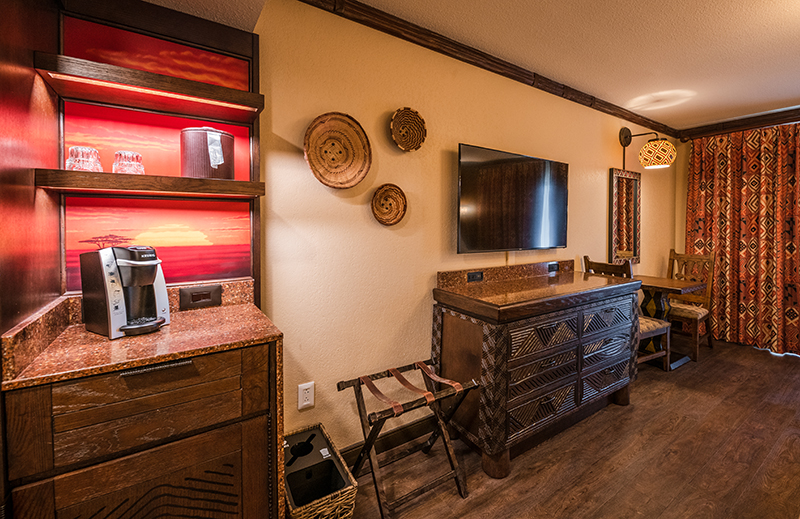 On the right is the dresser, television, and a small table with two chairs.

On the left above is a themed luggage stand, which to my knowledge is a Walt Disney World first. There’s also a mini-fridge, which now is connected to the closets and has shelving above it. This is a practical improvement. 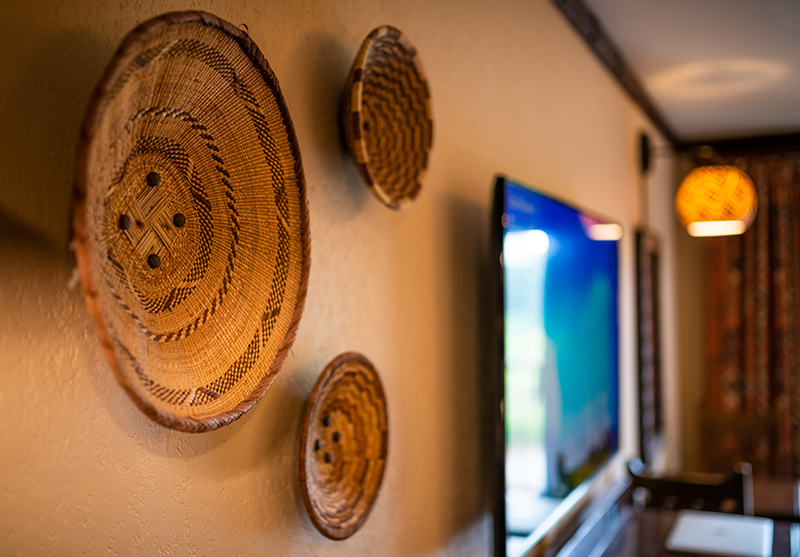 This area is a mix of old and new.

The dresser, chairs, and television are all new. The wall decor is not new, nor is the table. 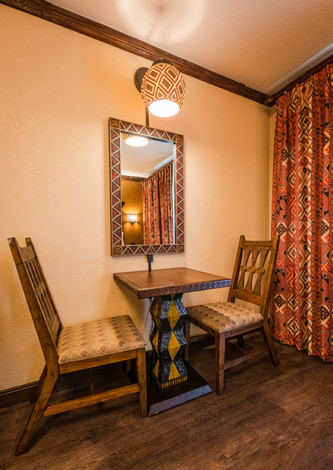 Most of pieces of furniture are upgrades over their predecessors, while the chairs are a lateral move. As for the mirror…it depends.

The previous mirror here had a jagged look to it, and was a bit more fun (this same mirror is still in the King guest rooms), but it didn’t have any lighting. 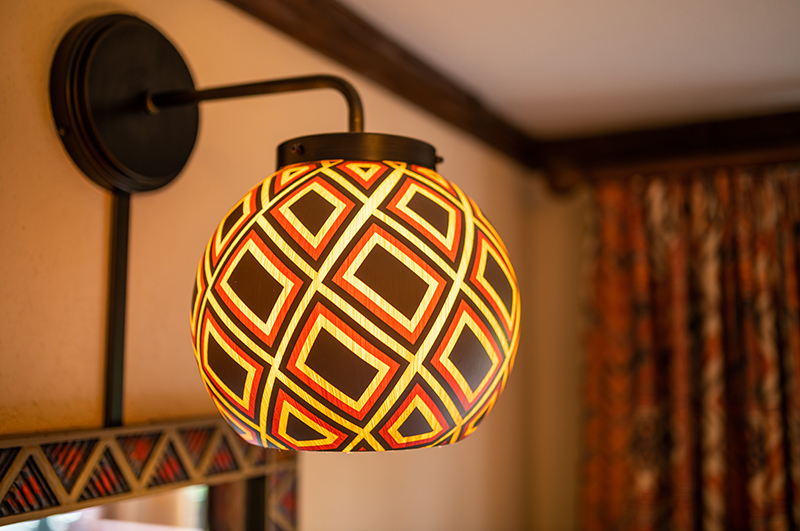 I’d say the square mirror plus the light fixture are an upgrade. Where you stand on this probably depends upon whether you want another light fixture.

The new mirror also has more splashes of color. I think this is a good thing here, as Jambo House’s old rooms could be accused of not being sufficiently vibrant. 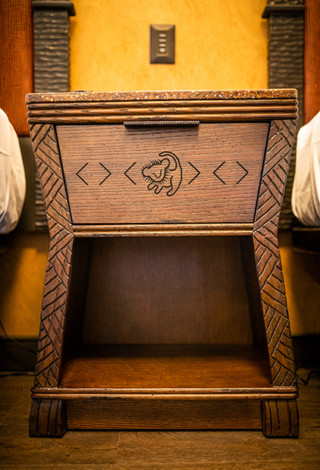 One thing we appreciate about the room reimagining at Animal Kingdom Lodge is that they’ve managed to incorporate Lion King details in a tasteful manner.

The above Simba in the dresser (which is also new) is one example. Another is here: 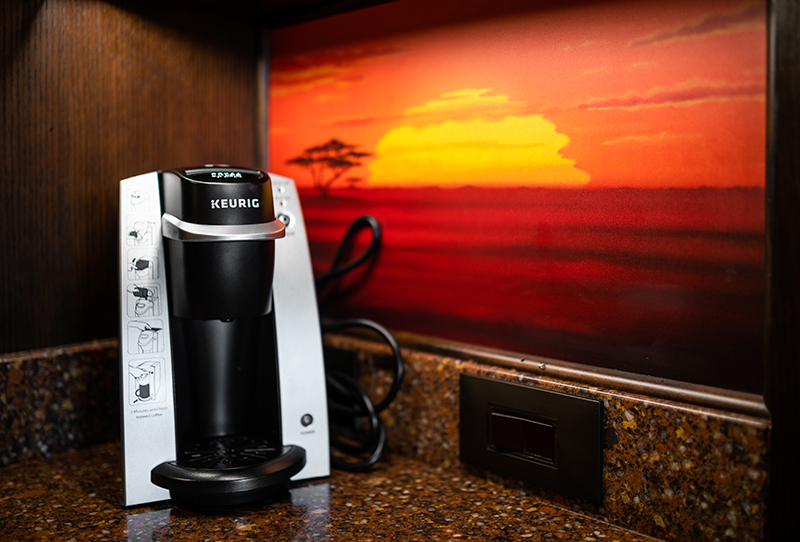 With that said, it’s nice to see the authentic African style mesh well with subtle Lion King touches here. The two don’t clash, and neither feels forced or awkward. Best of both worlds. 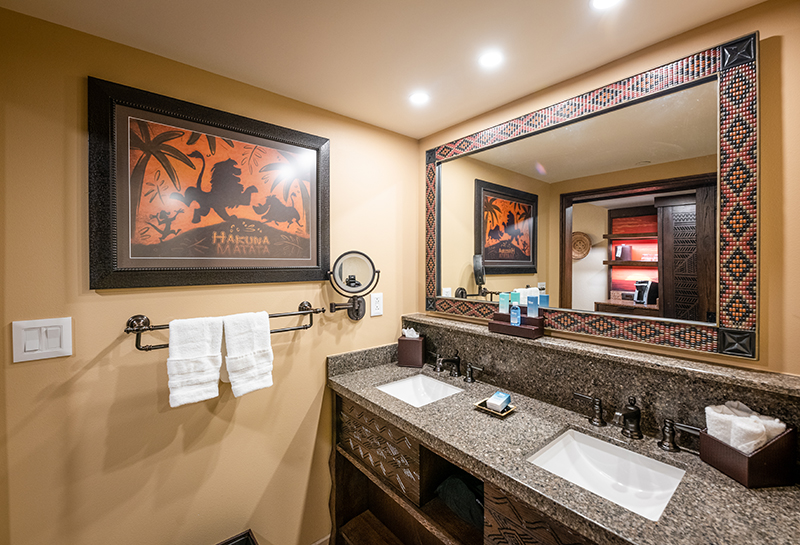 The one exception to this is arguably the Hakuna Matata art in the bathroom; I’d personally prefer some authentic art, but whatever. It’s not a huge deal.

That aside, these new bathrooms are nice. This is pretty similar to the old bathroom, but with the patterned (and overly-busy) wallpaper removed, plus better lighting and more storage space. The mirror is also different and the new rectangular sinks are more on-trend, but those are lateral changes. 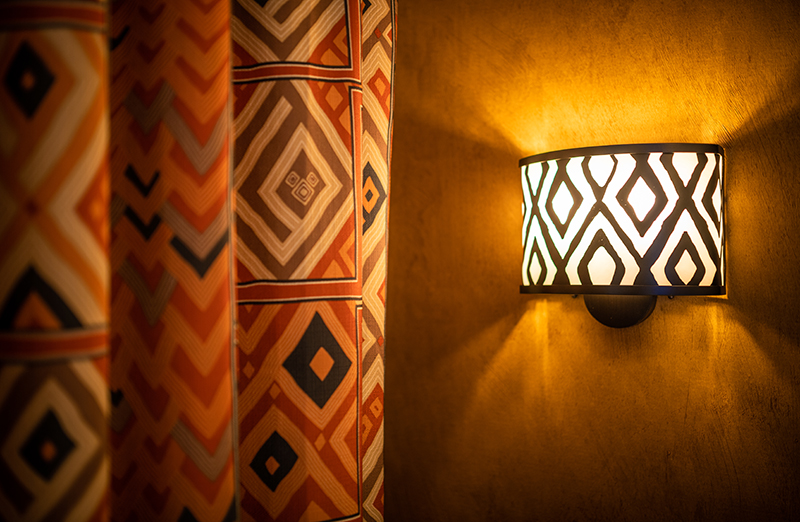 I also like the new light fixtures and curtains.

The curtains are colorful and nicely patterned (and have some hidden Mickeys, if you’re into that). The design of the sconce lighting also adds more texture to the rooms. 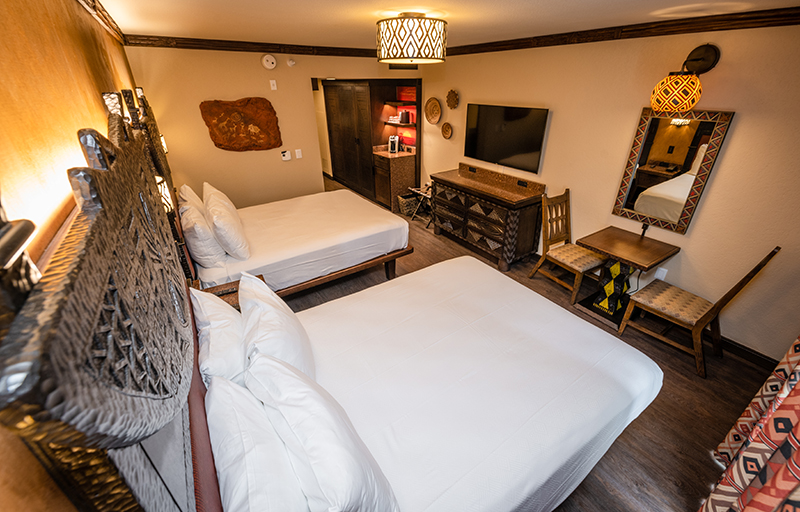 It’s hard to convey the full appeal of these new rooms, and if anything, I feel like I’m underselling them here.

We both liked the old rooms in Jambo House, finding them thematically rich and pure, but also a bit on the drab side. These new rooms remedy our prior complaints with some pops of color, plus more texture, and design that is as (or more) thematically rich. 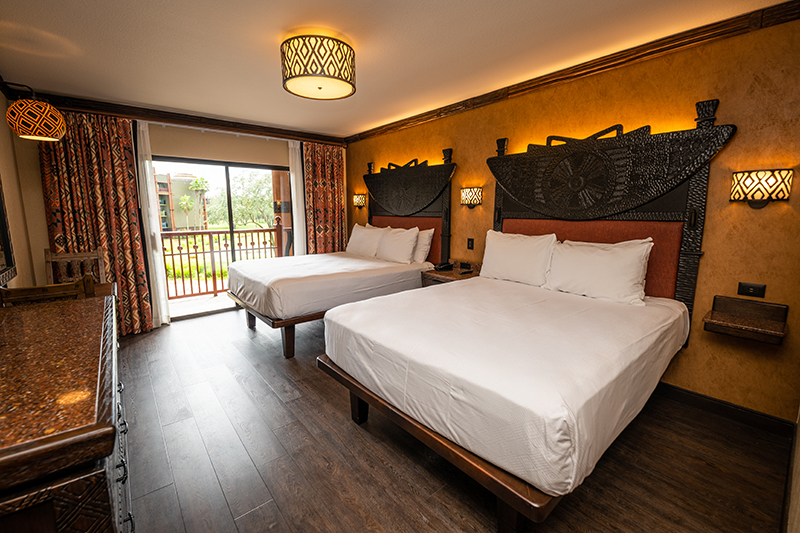 At the same time, some problem areas (like the busy look of the bathrooms) and dated styles have been freshened up. There’s also a litany of practical improvements like USB ports, luggage storage, and the wonderful new moody lighting options. The end result is a new room that strikes pretty much the perfect balance of theme, luxury, and practicality.

There are potentially some minor quibbles to be had with the new rooms in Jambo House at Animal Kingdom Lodge, but all things considered, these are a home run. We would take these in an instant and without any second thoughts over the old rooms. That’s not something I can say for any of the previous Deluxe Resort redesigns at Walt Disney World. 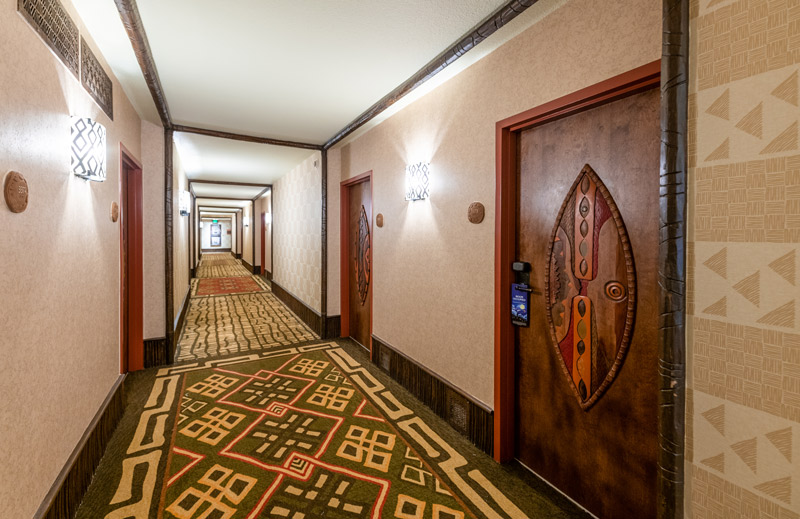 Ultimately, Imagineering did an incredible job with these new rooms at AKL, and whomever designed them should also be tasked with more room reimaginings at Walt Disney World. These do an excellent job of balancing themed design with a functional and pleasant space, with something for everyone–whether you’re a hardcore fan of themed design or a casual guest who just wants an inviting place to crash after a long day in the parks.

Even more than before, we highly recommend Animal Kingdom Lodge as a place to stay during your Walt Disney World vacation. While all-bus transportation to every theme park is a definite negative, the efficiency of the buses has improved tremendously in the last several years, so this is no longer the ‘dealbreaker’ that it once was. In every other regard, Jambo House is an excellent resort. Now we can add top-tier new rooms to its list of strengths!

What do you think of the new rooms at Disney’s Animal Kingdom Lodge – Jambo House? Do you agree or disagree with our review? Do you prefer the look of the old or new rooms? Any questions we can help you answer? Hearing your feedback–even when you disagree with us–is both interesting to us and helpful to other readers, so please share your thoughts below in the comments!