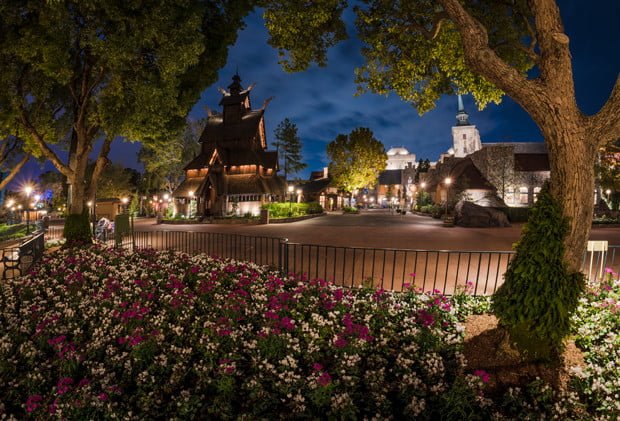 Norway is an Epcot World Showcase pavilion at Walt Disney World, which is home to the popular Frozen Ever After attraction. In this post, we’ll share some tips and info about shopping, dining, attractions, and entertainment at the Norway pavilion.

Our intention here is to mostly focus on shopping and architecture, since we cover the attractions, entertainment, and dining in other posts. We think shopping is one of the overlooked aspects of World Showcase, with many guests assuming that if they don’t want to buy anything, the shops don’t hold a lot of appeal.

To be honest, this described our mentality until our recent trip to Walt Disney World when we did a Figment World Showcase scavenger hunt (of all things). During this, we spent much more time in the World Showcase gift shops than we normally do, and took a harder look at the design and details.

The idea for this post was born there; I’m still not sure whether this is actually an interesting topic, but I figured I’d at least test the water… 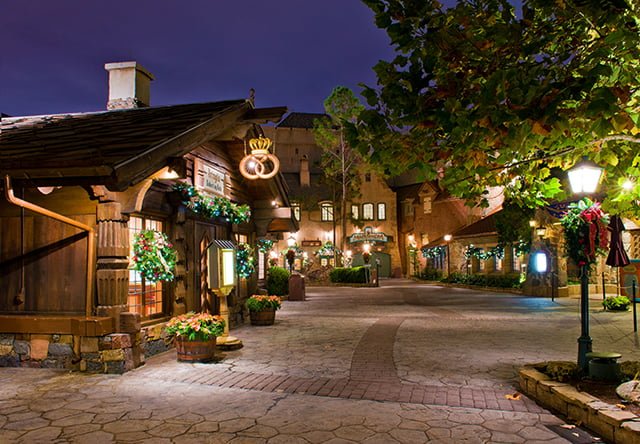 The Norway pavilion is the “newest” country in World Showcase in May 1988. It’s designed as pastiche of several Norwegian towns. The most notable architectural influences are from Gol Stave Church and Akershus Fortress & Castle both of which are located in the capital city of Oslo.

Going deeper into the pavilion, Kringla Bakeri og Kafe and Puffin’s Roost are both based upon traditional folksy styles of farmsteads found in the Setesdal Valley. (Really, similar inspiration could be found in just about any part of rural Norway.) 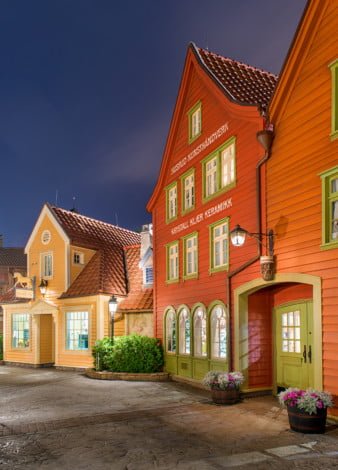 Continuing on, I believe the Fjording Shop entrance emulates a building from Old Bergen Museum, while the taller buildings next to that are based upon the famous Hanseatic League storefronts from Bryggen Wharf, a UNESCO World Heritage Site (also in Bergen).

The entrance to Frozen Ever After draws upon the gothic-meets-Art Nouveau style of Ã…lesund. Despite the range in the architecture, Imagineering managed to weave this all together to make it look like an intimate village in Norway. 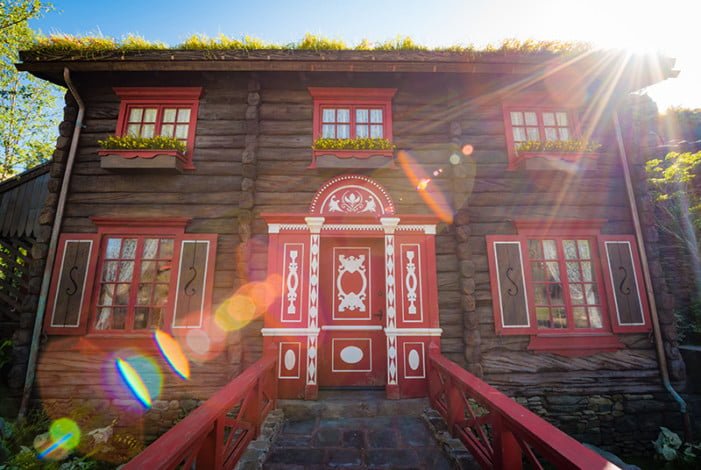 As mentioned at the outset, we’re going to be brief on attractions, entertainment, and dining…even though these are the reasons most people are going to visit the Norway pavilion. The most important thing to know on this front is that Frozen Ever After is one of Walt Disney World’s most popular attractions, and definitely worthy of a FastPass+ or (failing that) strategy to avoid waiting in line over 60 minutes.

In terms of attractions and entertainment, aside from the Frozen Ever After ride, the Norway pavilion offers the Royal Sommerhus Meet and Greet featuring Anna and Elsa, the Stave Church exhibit “Creating the World of Frozen, and a couple of roaming viking performers who entertain guests with bewildered facial expressions and doltish body language, which is funny because…Norwegians enjoy incredibly high quality of life and are well-educated?

Anyway, here are some of our other posts about Norway that will serve as helpful resources for experiencing Frozen Ever After and dining in Norway: 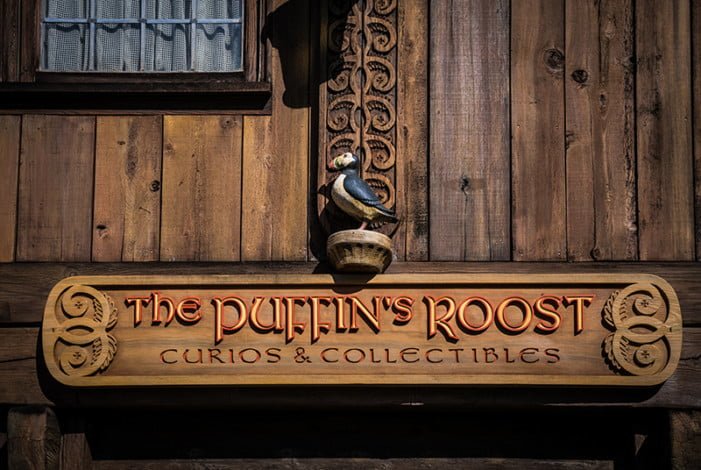 The Puffin’s Roost is the main shop in the Norway pavilion. This shop contains a series of interconnected rooms selling Norway-themed apparel, home goods, jewelry, and the world famous(?) fragrance of Norway: Geir Ness. Seriously, when we visited Norway, the entire country smelled like Laila! (Okay, so it was more like fresh grass and clean mountain air, but close enough.)

This sprawling shop also features Helly Hansen outerwear, hand knit Norwegian wool sweaters by Dale of Norway, and a variety of other authentic imported goods. If you’ve ever looked at the price tags on these items, you’ve probably come close to fainting, but it’s worth noting that these crazy-expensive sweaters are just as expense in Norway.

In fact, we’ve noticed very little markup on any of the real-world items throughout World Showcase. In some cases, Disney seems to stock items with shock-inducing prices (just what everyone visiting sunny Florida wants–a $300+ sweater!), which is a curious choice, but those prices are not adjusted for Disney inflation.

While these pricey authentic items can be really cool, I was particularly impressed with the Disney designs that highlighted aspects of Norwegian culture alongside Disney characters. During our scavenger hunt, I noticed many new-to-me pieces of Disney merchandise in World Showcase in World Showcase that I really liked.

The cool Disney merchandise throughout World Showcase is actually a big reason I wanted to do this series of posts. While Walt Disney World fans have (rightfully) gone bonkers over some of the retro-inspired EPCOT and other merchandise, the stuff available in World Showcase right now features exceptionally clever, original designs.

Let’s take a look at some of the merchandise currently available in Puffin’s Roost: 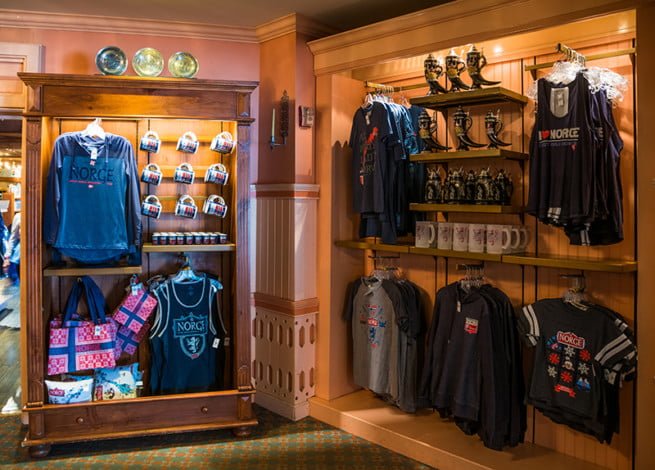 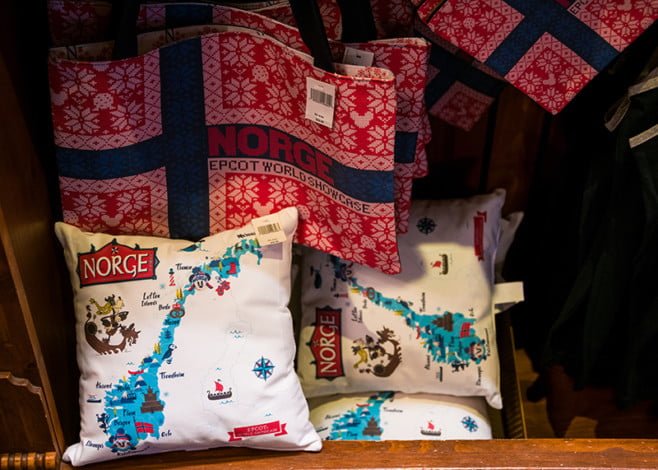 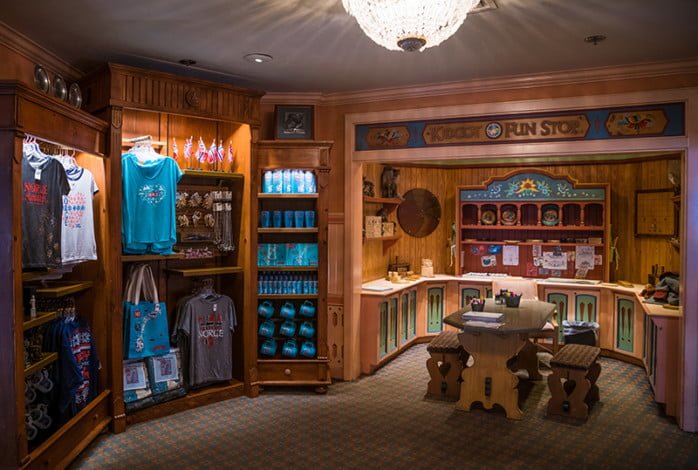 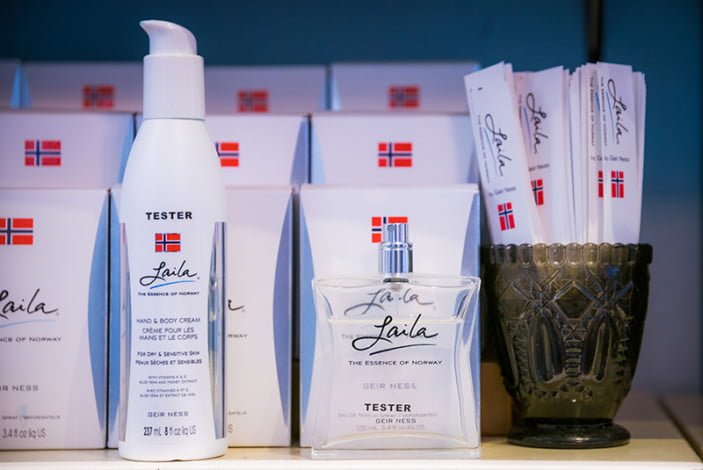 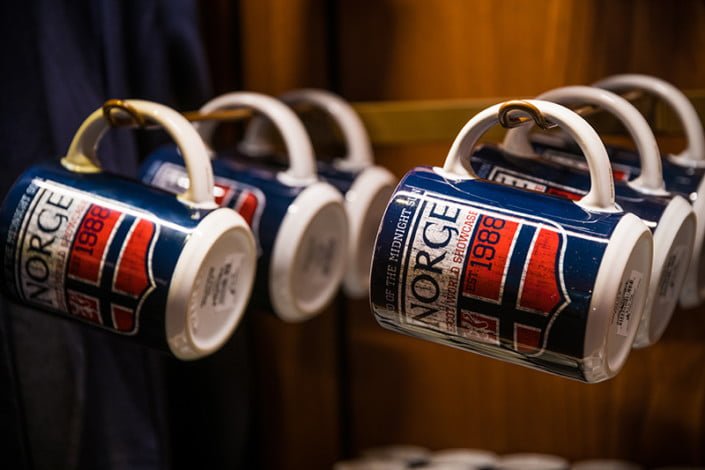 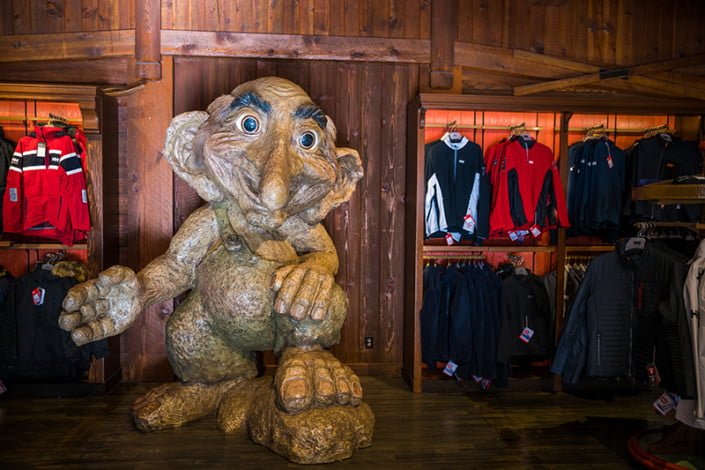 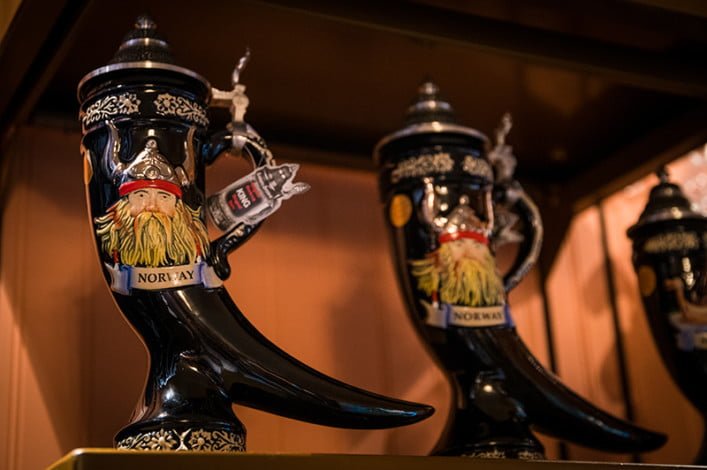 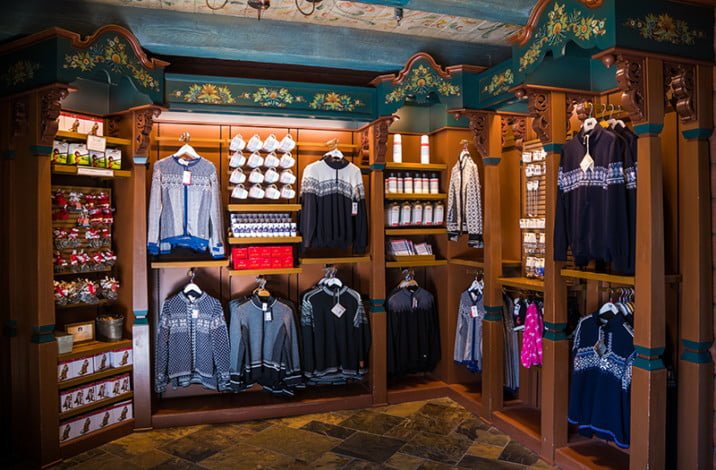 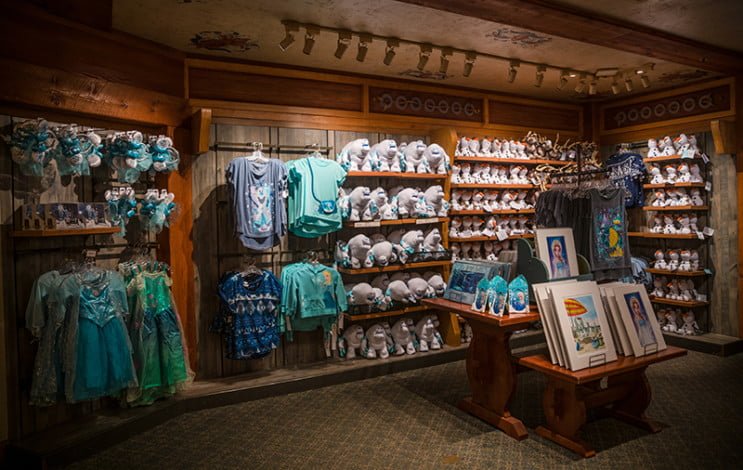 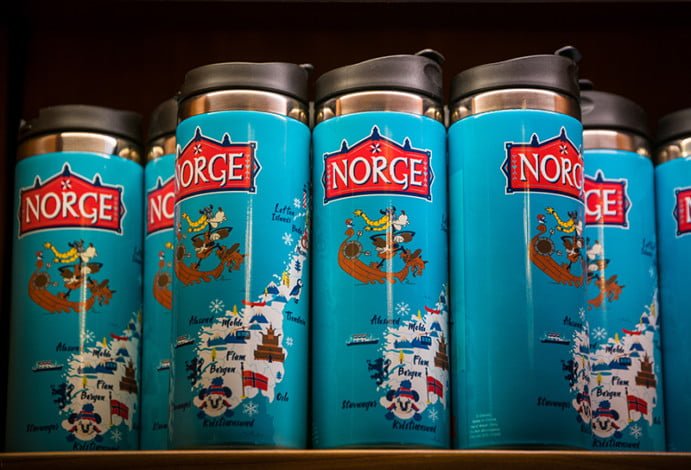 In addition to the main village of the OG Norway pavilion, there is another new village area that joined the region when the nation of Arendelle used its military might to annex Epcot’s Norway. This act that brought us the Wandering Reindeer shop and Royal Sommerhus. 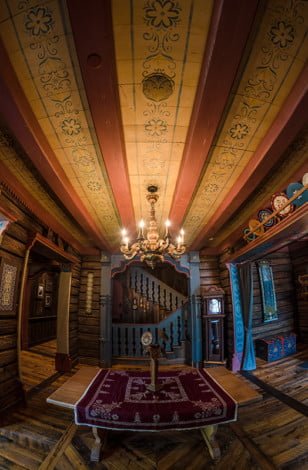 While this Frozen-themed area has been criticized by EPCOT Center purists like me, it does feature authentic Norwegian architecture. It’s nice to see Imagineering make lemonade out of lemons with the design–and it’s good to know this could be repurposed at some point to a wholly authentic area if Frozen falls out of favor–but it’s disappointing that the entire area is dedicated to an animated movie.

Overall, the Norway pavilion is one of my favorites, even after part of it being Frozen into Arendelle. It features an engaging mix of architecture, has a great bakery, and Akershus would be an awesome restaurant for everyone if they ever decided to do a non-princess meal there (although we totally understand why they don’t). While its open layout doesn’t make it a pavilion you can truly get lost inside exploring, it’s a strong offering in Epcot’s World Showcase.

Did you find this post interesting (be honest, because if most readers thought it was a snooze, we won’t do the entire series)? Anything else you’d like to see in subsequent installments about the countries of World Showcase? More about architecture or real-world inspiration? More merch photos? Any questions we can help you answer? Hearing feedback about your experiences is both interesting to us and helpful to other readers, so please share your thoughts below in the comments!

43 Responses to “All About Norway in Epcot’s World Showcase”