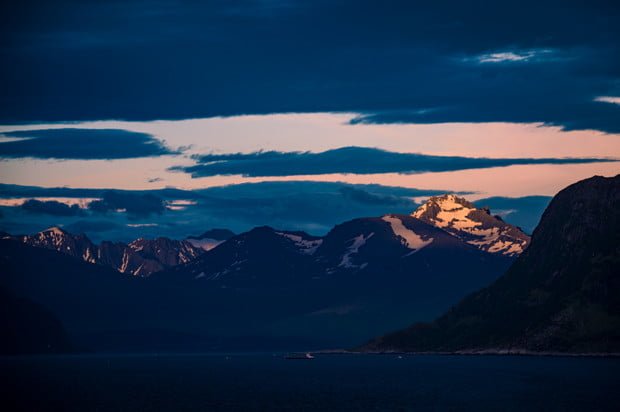 In case it’s not patently obvious by this point, we were having an incredible experience on our Norwegian Fjords cruise with Disney. As mentioned earlier in the report, we did it because we thought it was a good value, but had some hesitations about doing it instead of the Norway in a Nutshell (self guided) tour.

By this point in the cruise, all of those concerns had been eliminated. We had an amazing time in the port cities, saw much of what we wanted to see (even when we travel on our own, we see at most 50% of the things we intend upon seeing…we invariably get sidetracked and wander around), and really appreciated the convenience of the floating hotel, included meals, and programming.

After our first cruise, I wrote a post titled How “Not Sure I’m A Cruise Person” Became “When Do We Go On Disney Cruise Line Again?!” In what now feels like a glaring omission, I didn’t mention visiting new places at the ports once in that post as one of the upsides of cruising. I make no secret of my lack of interest in the Caribbean, and that’s probably a big part of why. Well, with this Norwegian Fjords itinerary, we had finally cruised somewhere that interests me, and I now feel like that post is deserving of a sequel…

While our first few Disney Cruise Line sailings in the Caribbean piqued my interest in cruising as a more relaxed vacation with Disney, this was even more of a game-changer. It showed me that cruising didn’t have to be relaxing, and instead could be leveraged as a new way of traveling at a floating Disney resort.

During the first few days of the cruise, we kept hearing comparisons to Disney’s Alaskan cruises. Apparently, both are similar “specialty” cruises, and appeal to an overlapping audience, at least among big Disney fans (I’m guessing the Norwegian Fjords cruise demo skews much more Europeans). 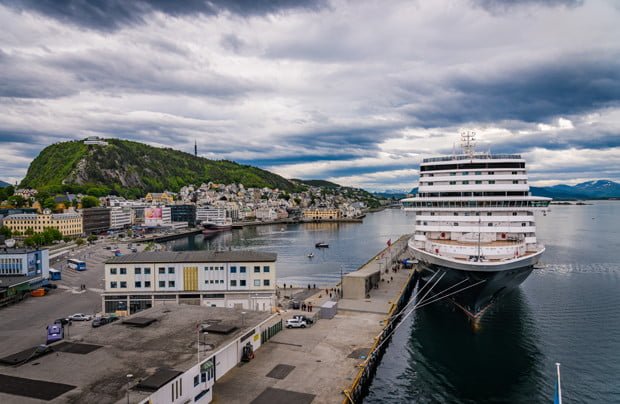 The Disney Wonder Alaskan cruises have been on our radar for a long time, but we’ve yet to see any deals good-enough to convince us to do it. I’ve also had a bit of hesitation as to whether a cruise is really the way I want to see Alaska.

Perhaps the best endorsement of the Disney Magic Norwegian Fjords cruise I can give is that it convinced us to make the plunge with the Alaskan cruise. Well, maybe. While on board the ship, we placed a hold on the Alaskan cruise for the end of summer. This hold expires tomorrow (June 20). 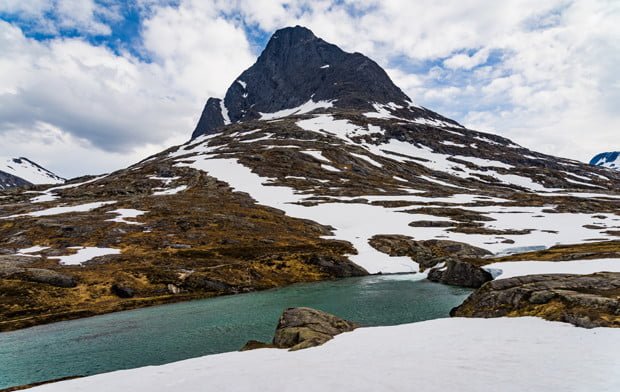 It’s more than we want to pay ($3,051 for the two of us), and is actually more expensive than other deals we’ve passed up for Alaska previously.

However, it was less than half the price of the Alaska sailing exactly one week earlier, which underscores why it’s important to be flexible to take advantage of Disney Cruise Line’s dynamic pricing if you’re looking for deals. 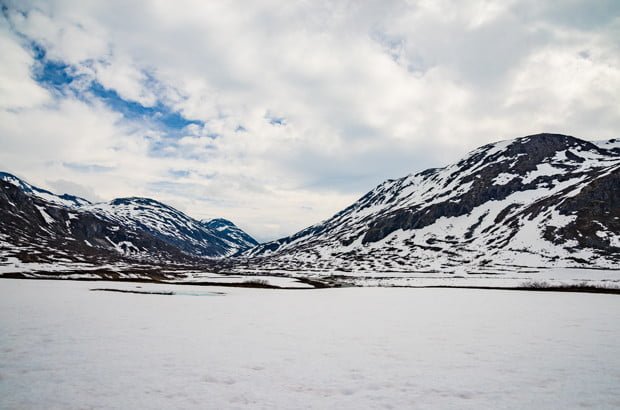 We placed the hold rather than booking it because we didn’t want to get caught up in the excitement of the cruise and make a decision impetuously. It’s a lot of money (much more than we paid for Norway) and conflicts with some existing plans, but it feels almost like a “now or never” scenario.

At this point, we’re about 80% certain we won’t book it. I guess I’m hoping for some last minute convincing from those who have done the Alaskan itineraries that, yes, it’s truly worth it–that we should just throw caution to the wind and take the plunge.

Who knows, maybe we will win the lottery and all this worrying about how much we’re spending today will have been totally pointless?! I think I’m willing to bank on that if it’ll get me to Alaska! 😉 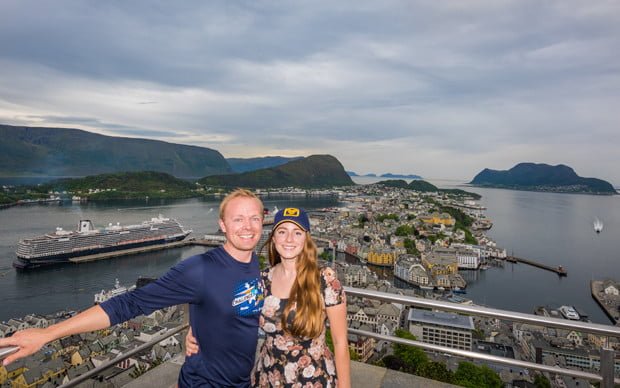 Okay, back to the regularly scheduled cruise report. We got back to Ã…lesund with nearly two hours before all aboard (our next port was really close, so we were able to linger until 8:00 p.m. here), so we decided to try doing the Fjellstua Viewpoint.

We vastly overestimated how long it would take to climb ~400 stairs, but it actually was only like a 10 minute commitment. It looks way worse from the ground. Gorgeous view–I just wish the sky were clear. 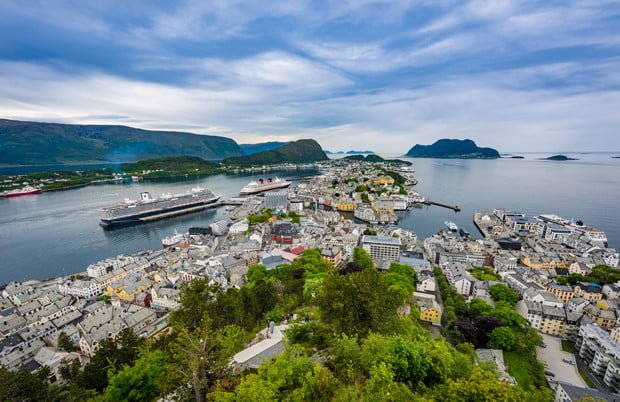 After that, we spent the rest of our time in port wandering around the city, mostly looking at the architecture.

I took a ton of photos of various buildings, but the sky was so gloomy and overcast that there’s no point in sharing them. I guess now they’re just reference photos in case I ever decide to get into the Art Nouveau construction game or something. 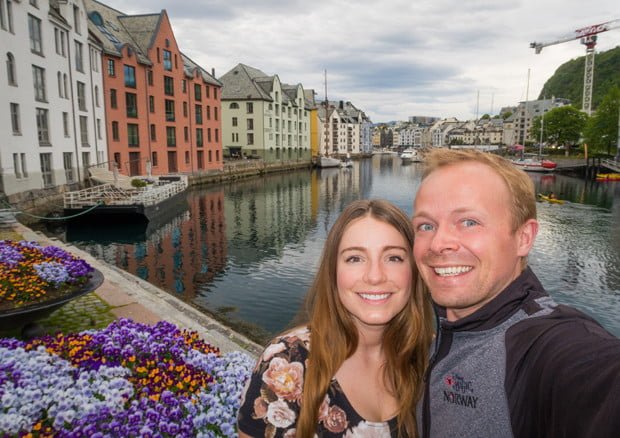 After spending a lot of time wandering, we decided to find a bakery for more school bread. This was a fool’s errand, as all of the bakeries we tried had closed earlier.

Finally, we found a grocery store near the port and just bought some packaged school bread from there. That was a mistake. For everyone who claims that Epcot school bread is bad because it “isn’t authentic,” I beg to differ. This was in the exact style of Epcot school bread, and was far (far) worse.

We were once again among the last 10 people to get back on the ship. (We know this because at each port, they’d yell the number of guests remaining in port after each guest boarded.) 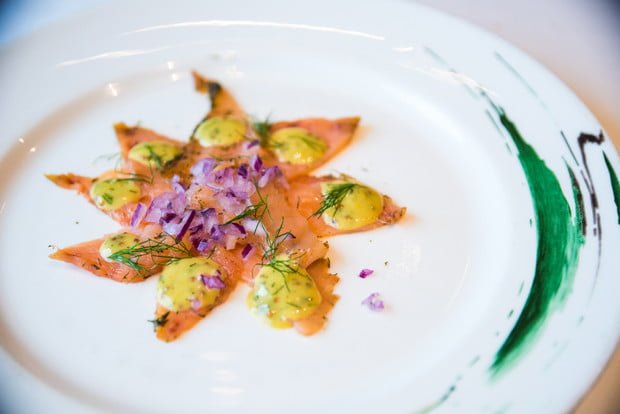 This installment is already really long (and I don’t think it does much good to share photos from a one-off menu, anyways), so I’ll keep the dinner section brief. 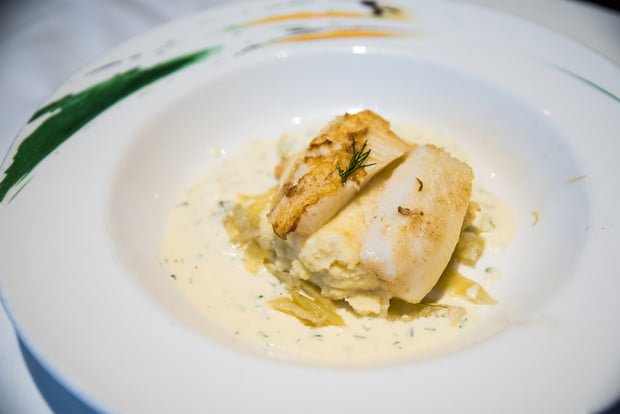 We were once again back at Carioca’s, and again mostly focused on the regional inspirations.

The food was generally good, although more hit or miss than normal for Disney Cruise Line. One of the upsides of ordering “extra” items is it being less of a loss when something you order is a dud. 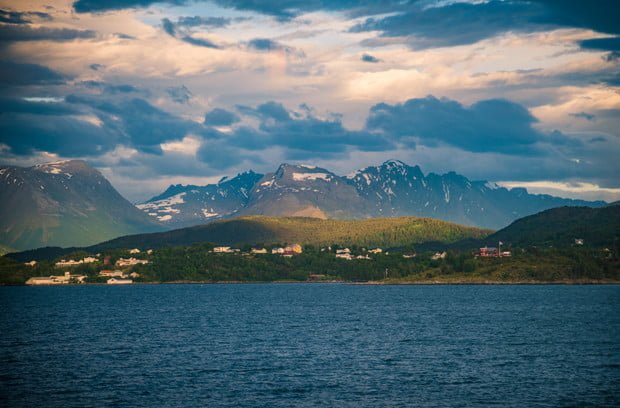 About halfway through dinner, we noticed that the sky was starting to look nice. The clouds had lifted just enough for some sun to peak through along the horizon, but were still thick and stormy enough to have an ominous look.

We made a point of finishing dinner so we could head outside to enjoy the scenery. 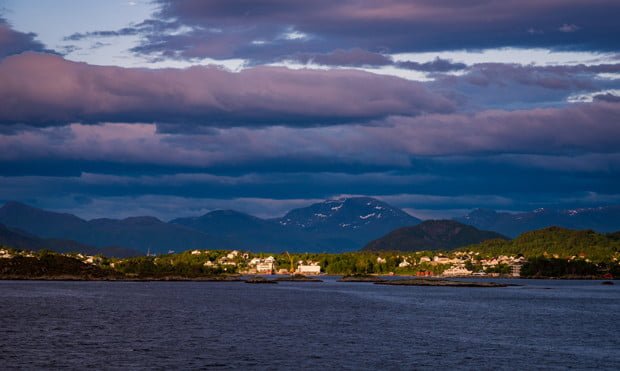 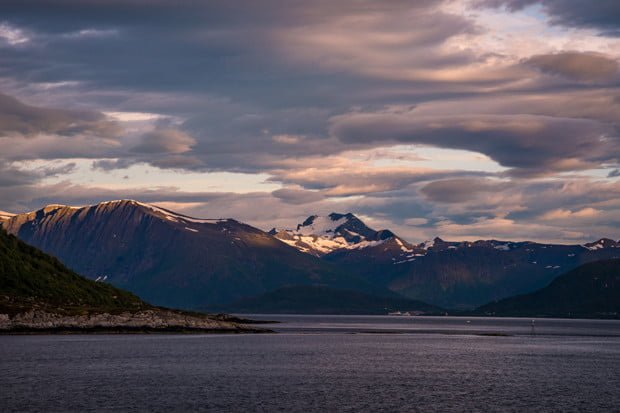 After spending some time on the deck, we headed back down to Fathoms to catch another Danny Buckler show.

Before it could get started, the Captain came across the ship’s PA system and informed us that we would not be able to port in Geiranger the following day due to high winds. Not exactly what anyone wanted to hear (we’ll cover that more in Day 5)… 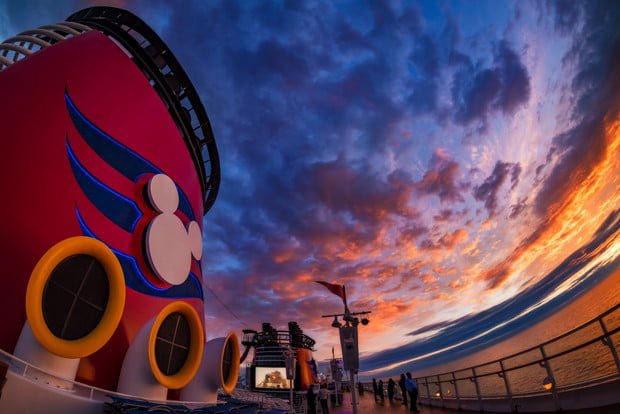 After the show, we headed back up to the deck for sunset. This was the latest sunset of the cruise, at just after 11:30 p.m. Not quite a midnight sun, but pretty close.

To my surprise, there were still a lot of guests up on the deck, probably in part because the sky had been getting progressively more beautiful since we left port (making it the nicest weather of the cruise) and also for the novelty of seeing a sunset at such an hour. It was definitely a beautiful, memorable experience. In hindsight, I wish I would’ve stayed up there until midnight (I’m sure the sunset color stuck around until then), but I planned on getting up at 5 a.m. to watch our arrival into Geirangerfjord, so I figured it was better to get to bed.

If you’ve done Disney’s Norwegian Fjords cruise, what did you do in Alesund? Thoughts on our experience with the Path of Trolls Port Adventure? Have you done Disney Cruise Line’s Alaska itineraries? Do you think it would be a wise move for us to throw caution to the wind and just do it now? Thoughts on anything else we did or mentioned about Alesund, Norway? Anything else to add? Hearing from you is part of the fun of these posts, so please share your feedback and questions in the comments below!