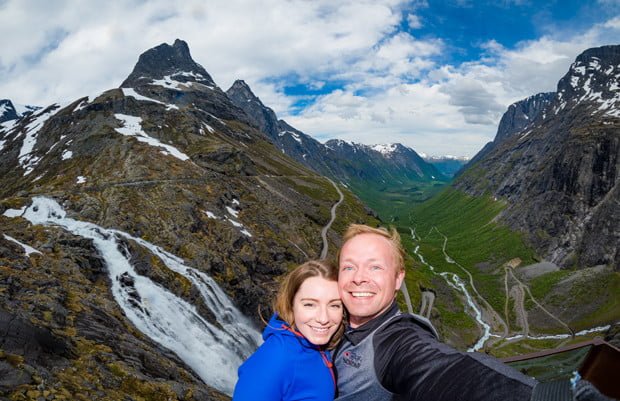 Day 4 of our Disney Cruise Line voyage through the Norwegian fjords had us stopping in Ã…lesund. We’ll do this the same way as our Day 3 report about Stavanger, with generalized Norway cruise planning info for Ã…lesund first, followed by anecdotes about our Port Adventure and experience.

Prior to the trip, Ã…lesund was the port that excited me the most. It also is the port that gave me the most stress while planning, as there were a few things I wanted to do. For the sake of others planning, I’ll go over some of the leading contenders here, including things we did not end up doing.

Actually, the main thing we wanted to do in Ã…lesund was simply explore the city. This city has a fascinating history…thanks to the entire town burning down in January 1904. The stated cause is supposedly a cow kicking over a torch–between this cow and Mrs. O’Leary’s, cows are quite the pyromaniacs.

Following the fire, German Kaiser Wilhelm II sent emergency assistance, and dozens of out-of-work architects descended upon the city. Art Nouveau was the international flavor of the time, and the vast majority of the city was rebuilt in a Norwegian flavor of Art Nouveau. Ã…lesund now stands as something of a case study in the style, with it dominating much of the city-center.

Aside from just wandering around taking in this unique city (and also visiting the Art Nouveau Centre (Jugendstilsenteret) to learn more about it), we had a few goals for this port. First, SunnmÃ¸re Museum. This is an open air museum with 55 old houses allowing visitors to step back in time as it showcases bygone culture and building styles. Oh, and it also has viking ships. 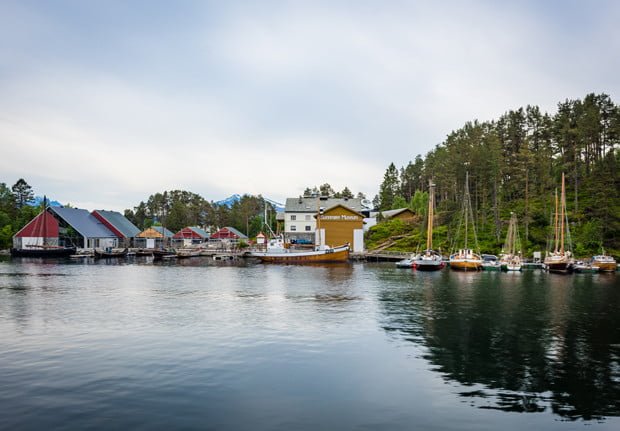 My desire to visit SunnmÃ¸re Museum was motivated mostly by the potential photo ops, but it sounded like the substance would be worthwhile, too. One thing to note is that SunnmÃ¸re Museum is where Disney Cruise Line’s pricey Frozen meet & greet excursion takes place, causing the entire place to close to guests who are not participating in that.

Second, Aksla Viewpoint. Also going by the name Fjellstua Viewpoint, this is the #1 thing to do in Ã…lesund per TripAdvisor reviews. It’s easy to see why, as the photos I had seen from this location were stunning…and it’s free! 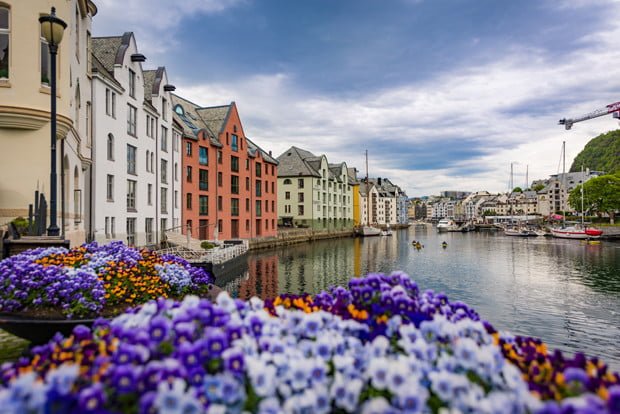 To accomplish the first and second items, we debated purchasing a City SightSeeing Hop-on Hop-off bus ticket. This company operates in most (all?) of the port cities, and we never ended up using them. We were dissuaded by some tepid reviews complaining of too few buses, but ultimately we learned that these are all very walkable cities. I’m glad we didn’t buy tickets for this bus, but your mileage may vary on that.

Third, the Majestic Island of Glorious Puffins. Officially known as Runde Island, I had read about the experience of taking a RIB Wildlife Sea Safari out to see these little birds. Doing a RIB (rugged inflatable boat) tour was on our list of things to do in Norway, but this ultimately did not make the cut for Ã…lesund due to a combination of cost (over $100), time, and alternatives. 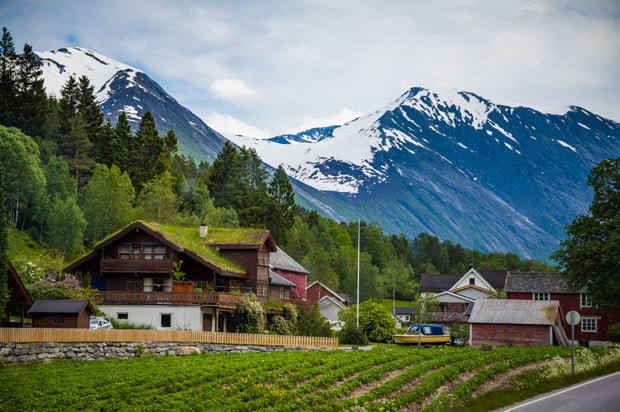 Finally, the Path of Trolls or Trollstigen. This is basically a winding mountain drive with numerous hairpin turns that takes visitors through the Trolltindene mountain range and through Reinheimen National Park.

A ‘mountain drive’ might not sound particularly appealing, but there’s a good chance you’ve unknowingly seen photos of this–it’s breathtaking. 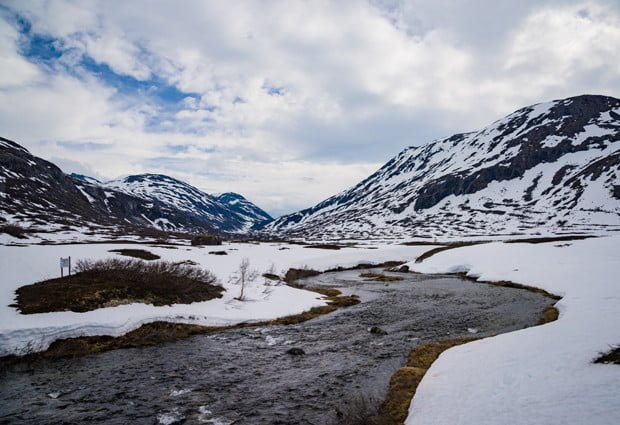 I had seen such photos, and as soon as I realized what Path of Trolls was, it became my #1 choice for Ã…lesund. Unfortunately, it’s not actually in Ã…lesund, and doing it would basically consume our entire day. That was not the only problem, either.

One of the downsides to booking last minute is that everyone else booking excursions can beat you to the punch. On our Caribbean cruises, this has never been an issue, primarily because I don’t really care about the Caribbean. Here, it was an issue. 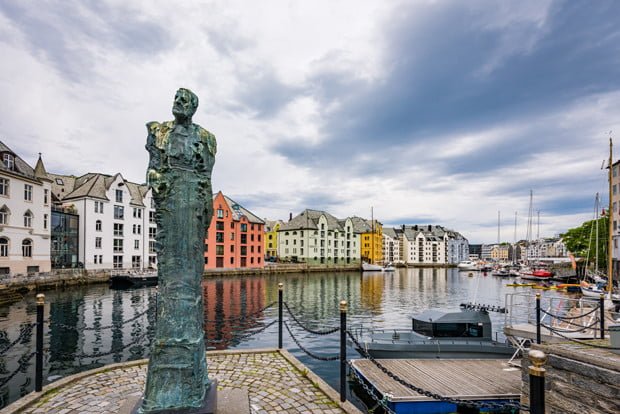 First, I tried to rent a car in Ã…lesund so we could do the Path of Trolls ourselves. Not only would it be cheaper, but we could do it more efficiently and not have to wait for a group. Unfortunately, the Avis rental car agency in Ã…lesund was sold out by the time we booked the cruise. (To my knowledge, every other rental car place in Ã…lesund was actually at the airport, and not accessible from the port.)

Then, I looked to third party tour operators. Nothing. Finally, we considered a Disney Cruise Line Port Adventure. There were two options for this, one without lunch and one with lunch. The cheaper without lunch version was fully booked by the time we booked the cruise. 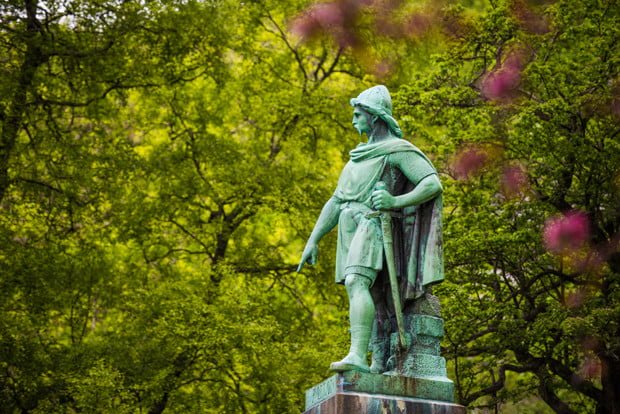 Even though this was the thing I wanted to do most in Ã…lesund, we went back and forth on booking this expensive ($165 each) excursion for weeks, until finally booking it 3 days before the cruise. Even though we were trying to do this cruise on a tight budget, we figured we’d really regret not experiencing this.

We’re both incredibly glad that we did the Path of Trolls. The tour was pretty efficient and our guide was knowledgeable and had a subtly wry sense of humor that was engaging. While I was concerned that the tour would be bogged down by a late start (potentially?) and an overly long lunch, it was actually a fairly tight experience. 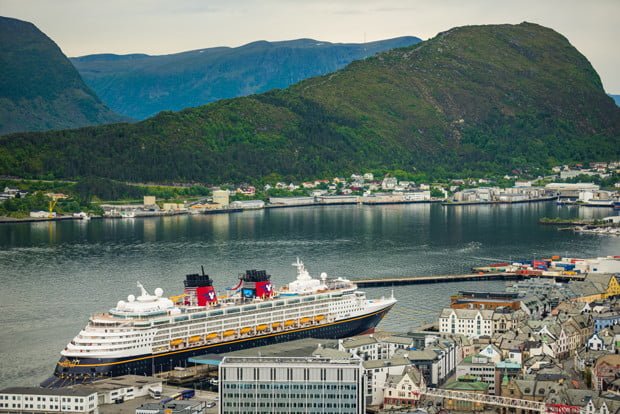 If you have the option, I’d recommend booking the Path of Trolls Port Adventure via Disney Cruise Line rather than renting a car and driving yourself, unless you’re really comfortable behind the wheel and/or have a family and want to avoid paying ~$165 x4.

I’d avoid the version with lunch, but if you have no option, having lunch provided is not the end of the world. The buffet was surprisingly good, and–so long as you like salmon–you get decent value by Norwegian standards. We’ll cover the why behind both of these recommendations in our anecdotal report of the experience that follows… 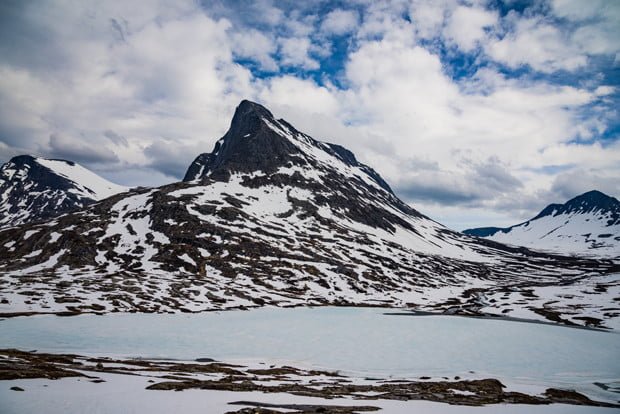 After a quick meeting in the Buena Vista Theater, we were led out to the buses (before any other guests had gotten off the ship, I believe) and the bus left promptly.

This made me quite happy, as I had read a couple of reports about this Port Adventure getting off to a slow start. I was hopeful with our quick start that we’d have an hour or two to explore Alesund at the end of the day. 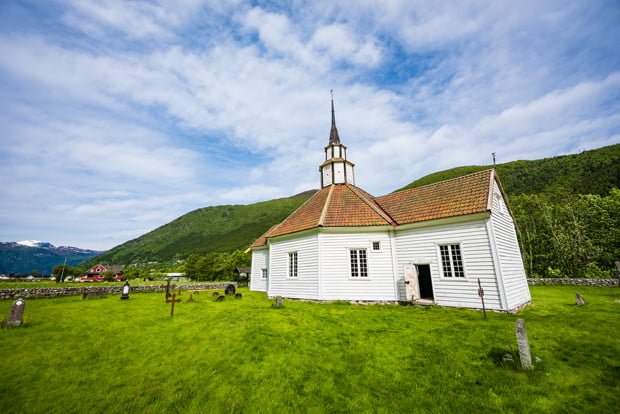 The drive began with a stop at Stordal Church, which gave us time to explore on our own for 15-minutes. This church was beautiful, with a tapestry of fresco paintings covering the interior. It may be an odd way to describe it, but this art felt almost like a tattoo sleeve.

Here are some photos from Stordal Church: 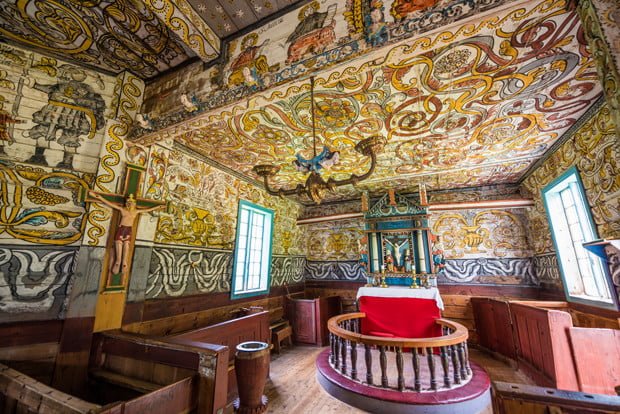 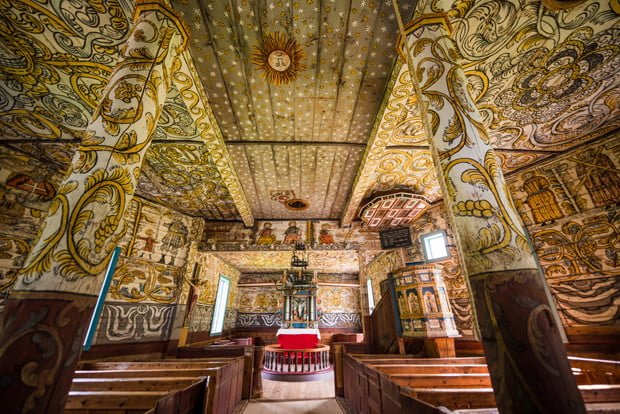 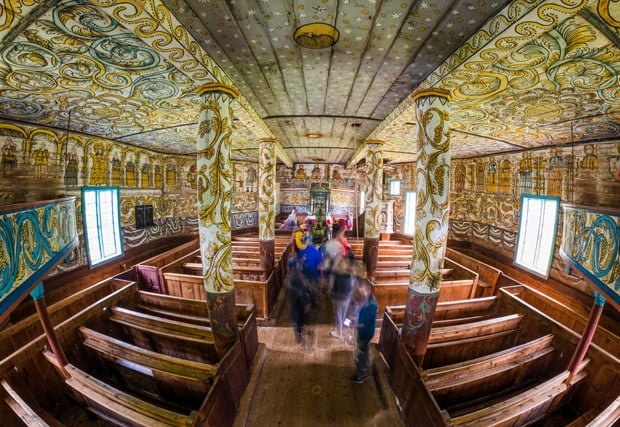 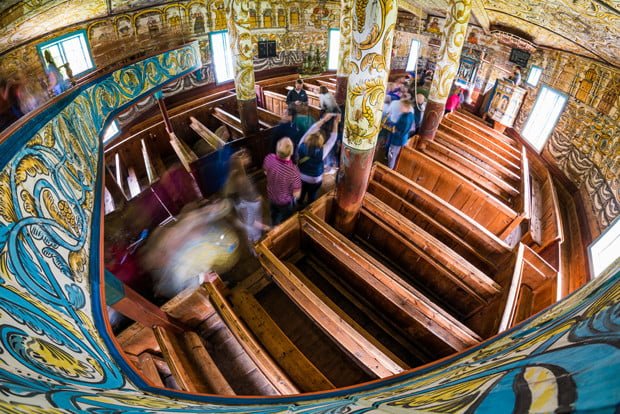 Our bus was the first to arrive at this small church (there were several buses), and we immediately raced off the bus to be the first inside the church once we stopped.

The downside of traveling in a large tour group is that you’re part of the kind of tour group that drives other travelers mad and overcrowds sites. 😉 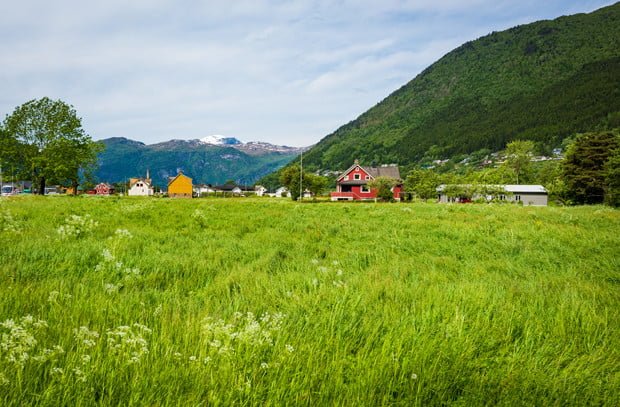 At every stop along the Path of Trolls, we were the first off the bus and among the last back on it. Almost everyone was back aboard the bus well before the stated “end” time. I couldn’t quite understand this.

Getting off of the bus and racing into the church gave us a few minutes of it empty without others inside, and I was able to snap a few photos before it became chaotic. Quite clearly, this intimate space was not built to accommodate a few packed buses. 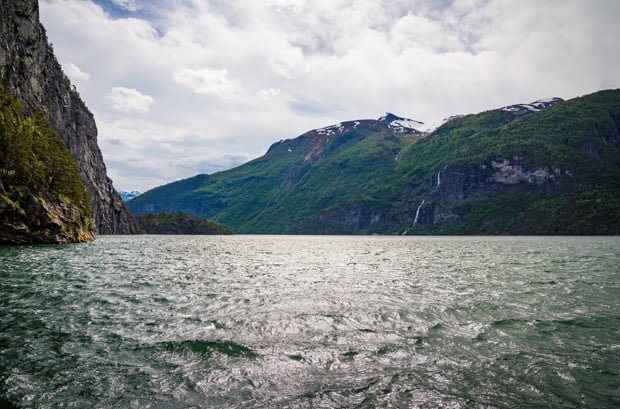 We always got back on with 1-2 minutes to spare, wanting to enjoy every last moment of the Norwegian mountains. I wouldn’t be surprised if us habitually being the last people back on the bus irritated others on our tour, but I didn’t do the Port “Adventure” to spend all day engaged in the perilous activity of gazing at Norway’s nature pass through a bus window. In any case, we never held up the bus. 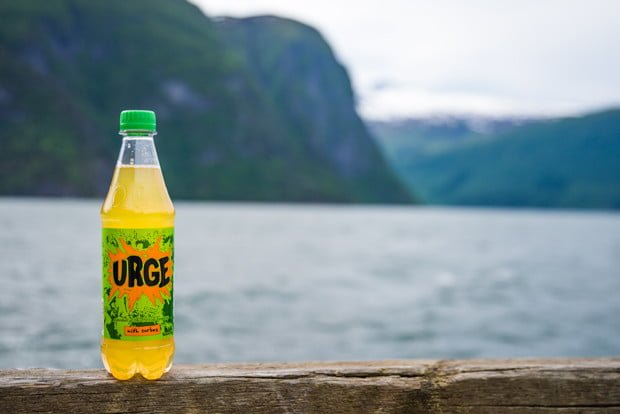 The next stop was somewhere in Valldal valley along the waterfront, which was basically a stop for some photos, and a chance to get refreshments at a nearby cafe.

We noticed a grocery store across the street, so we went there to get snacks instead of the cafe. (No, that’s not a knock-off Surge…it is Surge, but without the S. I wonder if “surge” means something obscene in Norwegian.) 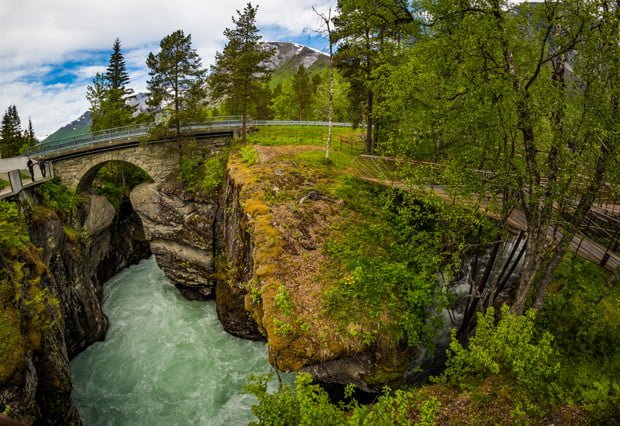 Following that, we headed to Gudbrandsjuvet. This is a narrow gorge through which the ValldÃ¸la River runs. Over this area, a beautiful boardwalk and observation platforms have been built. 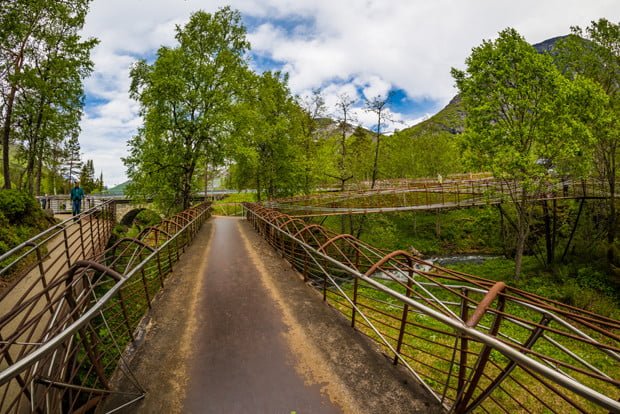 The chaotic flow of the water here has created some really beautiful formations in the rocks, and the way the boardwalk is built above the river and waterfalls immerses you in the experience and is really great. 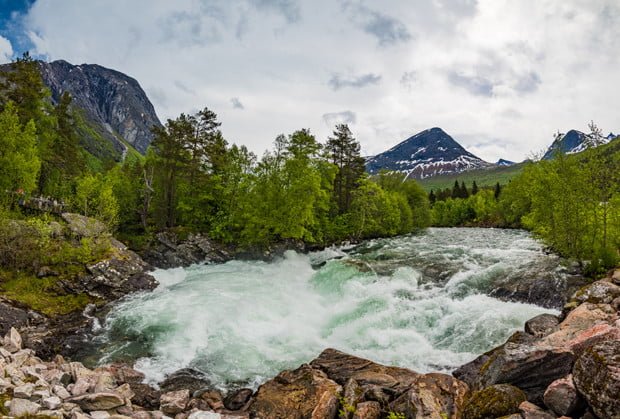 We would’ve never even known this place existed if we did this “tour” on our own with a rental car, and it ended up being one of my favorite stops along the way. The stops we had made up until this point made me really pleased that we did the Path of Trolls Port Adventure. Already, I was satisfied with the experience. 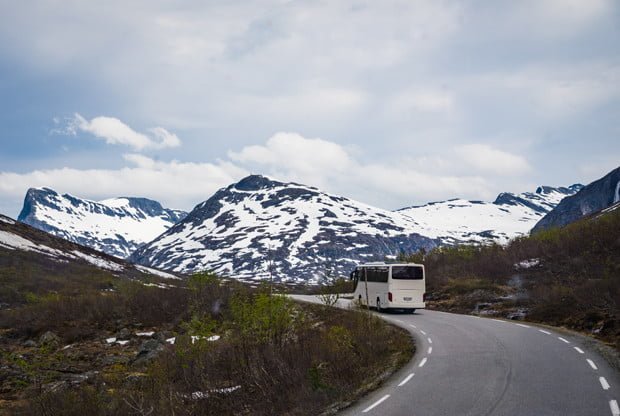 Gudbrandsjuvet is almost something of a base for the drive up to the Path of Trolls. Almost as soon as we had left this lovely little area, we began our ascent, entering Reinheimen National Park.

All of what we experienced up until this point was merely an opening act. Things had gotten progressively better as we passed through Reinheimen National Park, with some beautiful peaks that rivaled some of the best in the United States. However, I don’t think we were prepared for the jaw-dropping grandeur of the view from the top, nor did we comprehend what the Trollstigen had in store for us. On Page 2, we’ll cover driving through the Path of Trolls and returning to Ã…lesund…