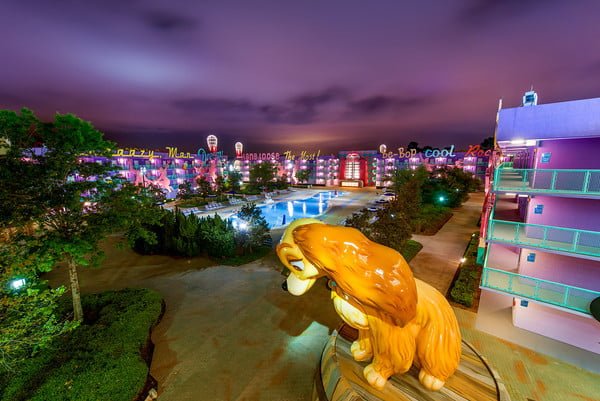 Pop Century Resort at Walt Disney World is currently undergoing a room refurbishment that will totally redesign the guest rooms. This is being completed in phases, building by building, and should be completed by May 2018. Prior to then (likely as soon as June 2017), it will be possible to request a refurbished room. In this post, we’ll cover what the refurbishment means and why you might (or might not) want to request a new room if you’re staying at Pop Century.

If you’ve searched DisneyWorld.com recently, you might’ve seen this notice: “Disney’s Pop Century Resort is currently undergoing some refurbishment projects across the Resort. During this time, the Resort will be in full operation, with all amenities available–including dining, merchandise and recreation locations. It is possible that construction may be seen or heard, but noise should not be heard from Guest rooms between dusk and 9:00 a.m.”

June 11, 2017 Update: Guests who have checked into Pop Century this week staying in the 90s building have reported that they have received a remodeled room. It appears that the entire 90s building is now finished and open, with work continuing on the 80s building, which should also be finished in the very near future…

If you’re visiting in the next couple of weeks and want a refurbished room, we’d recommend requesting the 90s. After that, you should be safe to request the 80s, as those rooms should be done by around July 2017. If you’ve already had a chance to stay in one of the new rooms, please report on your experience in the comments below.

Here’s a look at one of the new rooms that Walt Disney World posted on Twitter:

Groovy! The resort rooms at Disney’s #PopCentury Resort are starting to pop with updates in color and comfort! pic.twitter.com/3aEsZbISWF

Some guests have expressed concern to us about how this room refurbishment will impact their stay at Pop Century, and we want to reiterate that it really should not. This refurbishment is to the guest rooms only, and is occurring in sections during daytime hours. You won’t notice it unless you’re in the building where it’s happening during the day, and even then it’s unlikely. (If you’re still worried, simply request a room away from the refurbishment.) We think there’s a lot to be optimistic about with this room refurbishment, too…

If you’re a regular reader of our newsletter, you might recall that I mentioned these new rooms over a year ago (I might’ve posted about them on the blog, too–I cannot recall). At that point, someone had sent me photos of a test room that would be the basis of this pretty dramatic room renovation.

Fast forward to last week, when I finally heard an update on this that some rooms in the 80s/90s section of Pop Century were nearing completion. I decided to post about it on our Facebook page to see if anyone could confirm details or share photos.

Someone sent me through-the-window photos of construction progress (thanks Monica R. for the on-the-ground reporting!) on the 90s building that were taken May 8, and not only was the final design identical (from what I saw) to the test design, but the room was pretty much ready for occupancy. The only thing missing was a mattress.

The biggest change you can expect to see is a new configuration with a queen sized bed flanked by nightstands, and Murphy bed that doubles as a table (see the below Art of Animation Murphy bed for visualization–the table here will be much smaller and everything less…vibrant). 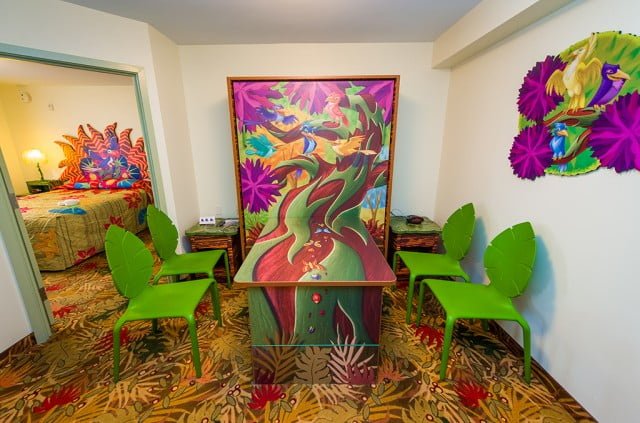 In addition to that, there will be a lighter color scheme, dominated by white with hints of orange and lime, and Mickey Mouse pop art above the bed. There will be a dresser under the television, coffeemaker kiosk with drawers, vessel sinks, illuminated bathroom mirror, and abundance of storage.

Personally, these new rooms are very appealing. They feel very much like Mickey meets Mid-Century, almost like Cabana Bay Beach Resort at Universal. (Based on what I saw, these are not quite that nice or detailed–but nicer than the current Pop Century rooms.)

Although it’s a divisive resort, we have always been fans of Pop Century. We stayed here a lot in college, and it was a favorite spot for our commando (in Disney parlance, this does not involve going without undies) long weekend trips.

It’s a great way to enjoy on-site benefits like Extra Magic Hours, Disney’s Magical Express, and free transportation at Walt Disney World. If you’re mainly spending time in the parks, Pop Century has always been a great option thanks to those perks, reliable transportation, strong (for a Value Resort) dining, and, of course, its price-points.

We are not on quite as tight of a budget as we were back in college, but this room renovation puts Pop Century back on our radar as a regular place to stay. The space that the Murphy Bed will open up plus having a coffee maker will be huge for us. We think Pop Century will be great for couples and solo travelers.

Style-wise, I’m also a fan of the new rooms. The pop art suits these rooms well, and the renovated rooms now strike me as more on-theme than what was there before.

In fact, we’re so optimistic about the refurbished rooms that we’ve already booked Pop Century for our Fall 2017 Walt Disney World trip. (Now watch, we won’t get a refurbished room!) 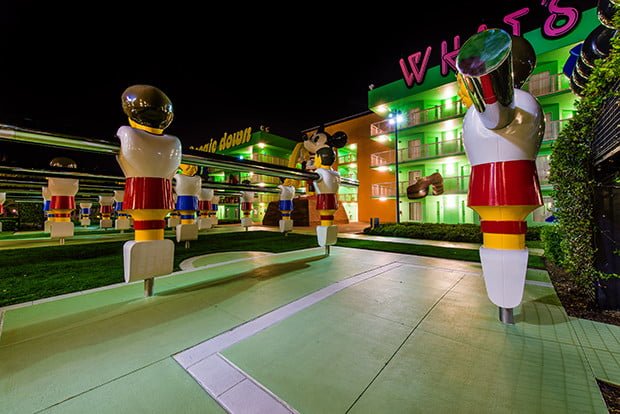 Of course, these new rooms are not going to be for everyone. The layout, particularly the Murphy bed, will not be as appealing to some families. It’s also possible that kids won’t enjoy the more subtle theme and use of pop art rather than an overt cartoon style.

This is understandable, but my counterpoint to this would be that literally every other Value Resort is aimed squarely at families with kids. I know, I know, “Disney is for kids, Tom!” This does not mean that every square inch of Walt Disney World needs to cater directly towards them.

Adults without kids represent a surprisingly large demographic for Walt Disney World. From the 1970s until 1990s, this was something Disney recognized, and promoted its adult side quite a bit: from golf to Pleasure Island to the Disney Institute (and more).

When Sarah and I first started visiting together, the tides had turned, and almost everything was geared towards kids, right down to promotional videos, which seldom featured any non-nuclear families. It was all about pirates, princesses, skipping hand-in-hand with Mickey Mouse to Dumbo, and so on.

At some point in the last 5 years or so, this changed again. We’ve seen a noticeable uptick in the amount of offerings aimed at childless adults, honeymooners, and other guests like us. These are still the small minority of offerings, but it’s nice to see that we are no longer the “forgotten” demographic.

To be clear, I’m not stating that everything at Walt Disney World such cater towards people like us. To the contrary, I realize families are Disney’s bread and butter. I’m simply stating that families need to likewise understand that the (Walt Disney) World does not revolve around them. From honeymooners to conventioneers to obsessive out-of-state Annual Passholders, people without kids are also a lucrative demographic…and Disney doing a little bit for them is not the end of the world for families. 🙂

Overall, there are a couple of main takeaways from this article. First, you should not worry about your experience being impacted if you’re staying at Pop Century between now and May 2018, but you might want to request a room away from the refurbishments if you’re really concerned about it. Second, depending upon whether the new room style (particularly, the pull-down Murphy bed) appeals to you or not, request a refurbished room or a non-refurbished room if you’re visiting in Summer 2017 or later. We’ll keep you posted with updates to the Pop Century room refurbishment project as we hear them, so stay tuned!

What do you think of these changes to Pop Century? Excited for the room redesign, or are you not a fan of the Murphy bed style? Do you agree or disagree with my take on the changes being appealing to couples or solo travelers? Any thoughts of your own to add? Have you done some sleuthing of your own to see the new rooms? Share any questions, tips, or additional thoughts you have in the comments!