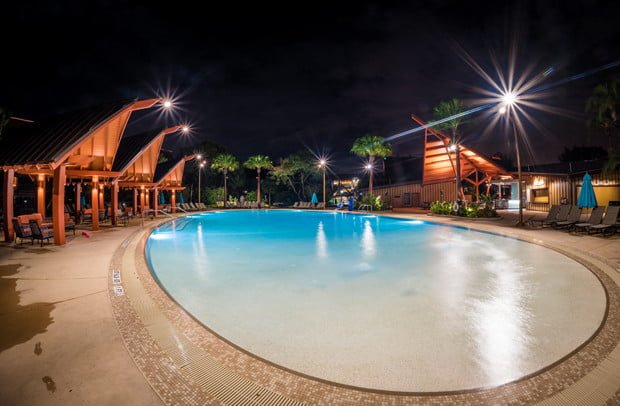 Oasis Pool Bar & Grill is a counter service restaurant at Walt Disney World’s Polynesian Village Resort. This review features food photos, our recommendations as to what to order, and who should make the trek to this new-ish pool bar along the Magic Kingdom monorail loop.

Before we get to all that, I want to start by offering an emphatic YOU’RE WELCOME for this post. I anticipate this Walt Disney World restaurant review being one of our most helpful yet. I can hear the conversations now…

“Should we eat at Cosmic Ray’s or Pecos Bill?”
“I dunno. We’ve done a lot of Magic Kingdom dining…maybe something on the monorail loop?”
“OH DAWG, I’ve got just the spot!”
“Captain Cook’s?”
“No, even better, we’re gonna go–fully clothed–to a random pool bar to awkwardly eat a grand feast around half-naked people in swimsuits!”
“Dang, that’s unprecedented levels of brilliance. Why haven’t we ever thought of this before?!”

At least, that’s how I assume the conversation will go. That seems like a pretty normal and totally reasonable conversation to have. I know–it’s a dumb “joke” (if it even qualifies as that), but I’m trying to make this review somehow interesting.

The reality is that this is a pool bar that most Walt Disney World guests either won’t be able to dine at, or won’t care about even if they can. (Sorry, not every post can be a “sexy” versus comparison of hotels.) 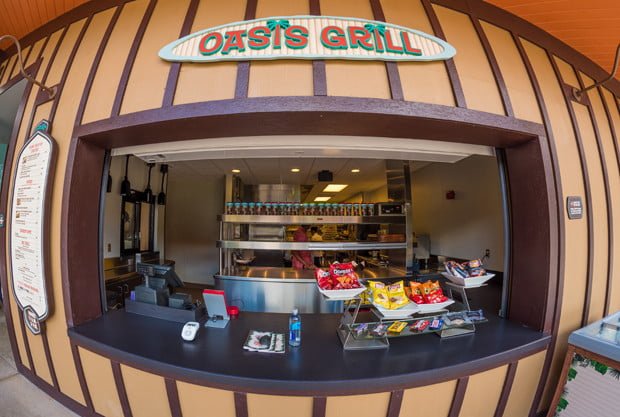 Only Polynesian guests can access Oasis Pool (via MagicBand), so it’s not like this Magic Kingdom-to-Oasis Pool Bar & Grill scenario could play out in the first place unless you’re already staying at the Poly. In which case, you are probably heading back to your hotel for a midday break or something anyway. 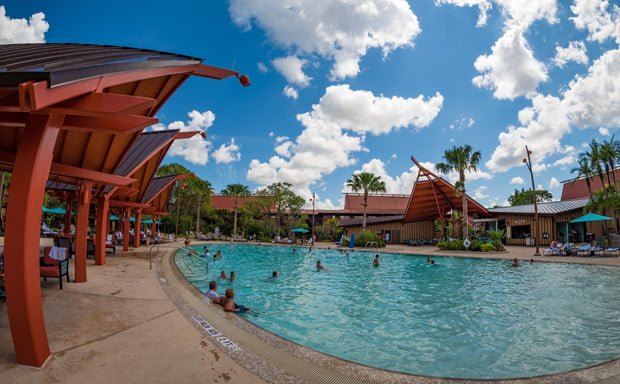 In terms of ambiance, there’s not much to discuss here. Oasis Bar & Grill is a pool bar, so if you like the ambiance of being poolside, it’s nice. There is no theming, per se, but you can enjoy the open air atmosphere of the Polynesian, and during the sunny daytime hours, there’s shade. 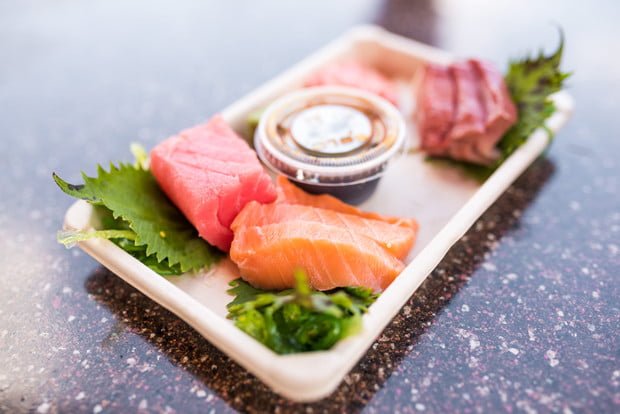 We dined here with easyWDW Josh, who ordered the sashimi. I didn’t know quite to expect from this one, but what he received didn’t even look appetizing. (I’ve seen photos of this plated on actual dinnerware, and it looked much better, so YMMV on this.)

On the one hand, it was $17 and the Poly’s options like this tend to be above average. On the other hand, this was a counter service pool bar. Josh wasn’t too impressed with it (that’s probably a charitable description–I don’t think he’s reviewed it yet) and the pieces Sarah and I tried were pretty flavorless. None of us would recommend this. 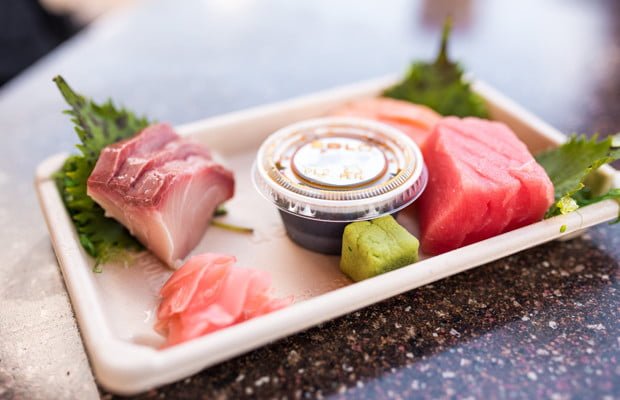 You’re probably better off sticking with sushi if you want something like this at the Poly. Sashimi is typically a higher grade of fish with more of an emphasis on freshness, so subpar quality/freshness makes a big deal.

That’s not always true with sushi (even if myths persist suggesting otherwise), and it’s also easier to mask subpar fish with other ingredients and adept preparation. 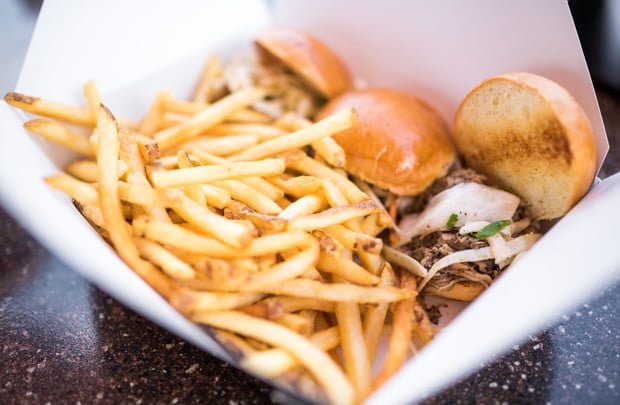 For my entree, I ordered the Kalua Pork Sliders. These smoky pulled pork sliders served with citrus slaw might look familiar as something similar to what’s served at the Hawaii Marketplace at the Epcot International Food & Wine Festival. 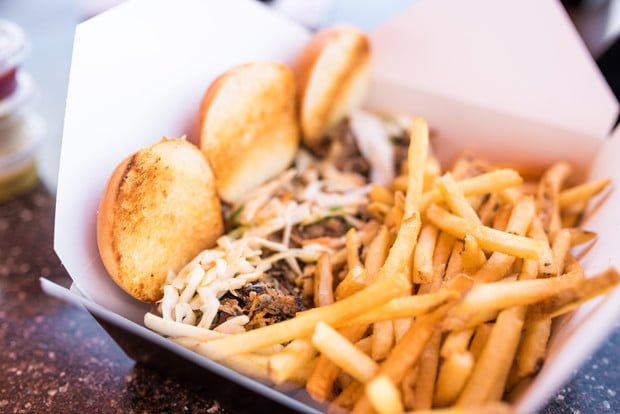 These were on par with the Epcot version. I found the pork sliders to be a pretty high quality dish, and one that was sufficiently filling with fries for a relatively reasonable price. Definitely recommended. 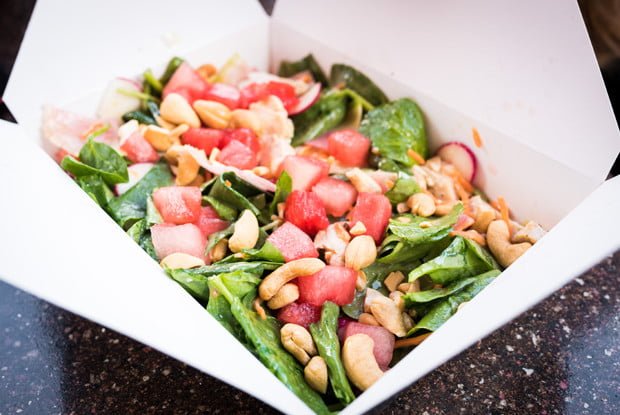 Sarah had the Spinach and Watermelon Salad. This is served with cashews, radish, and honey-lime Dressing, and she found it to be refreshing, and noted that the spinach had a fresh, almost sweetness to it.

There was a point when we’d praise any Walt Disney World salad that wasn’t iceberg lettuce and a skimpy amount of tomatoes, chicken chunks, and other basic vegetables, but Disney has really upped its game on salads resort-wide over the past few years. As such, I don’t really feel this salad is all that noteworthy (which is, overall, a good thing). 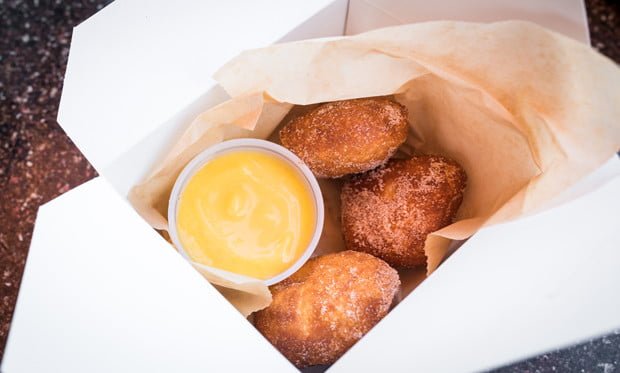 For dessert, we had the Malasadas, which are Portuguese Doughnuts served with Passion Fruit Curd. These were fantastic. Doughy and fresh, they were quite possibly better than the fabled mini doughnuts at Typhoon Lagoon and Blizzard Beach. (It’s been a few years since we have had those, but the Malasadas seemed higher quality and that passion fruit sauce was excellent.)

Overall, Oasis Pool Bar & Grill is certainly not a bad option if you’re staying at Disney’s Polynesian Village Resort and are already at this pool or are in a guest room closer to Oasis Pool than the Great Ceremonial House. The menu is surprisingly lengthy for a pool bar, and it has some solid choices that are unique to this location (there’s some menu overlap with Captain Cook’s, but not much). Nothing special enough to recommend making a special trip here (if that were even possible) over Captain Cook’s (which is one of the best counter service restaurants at Walt Disney World), but if you’re staying at the hotel and in the neighborhood, it’s a mostly suitable alternative. What do you think?