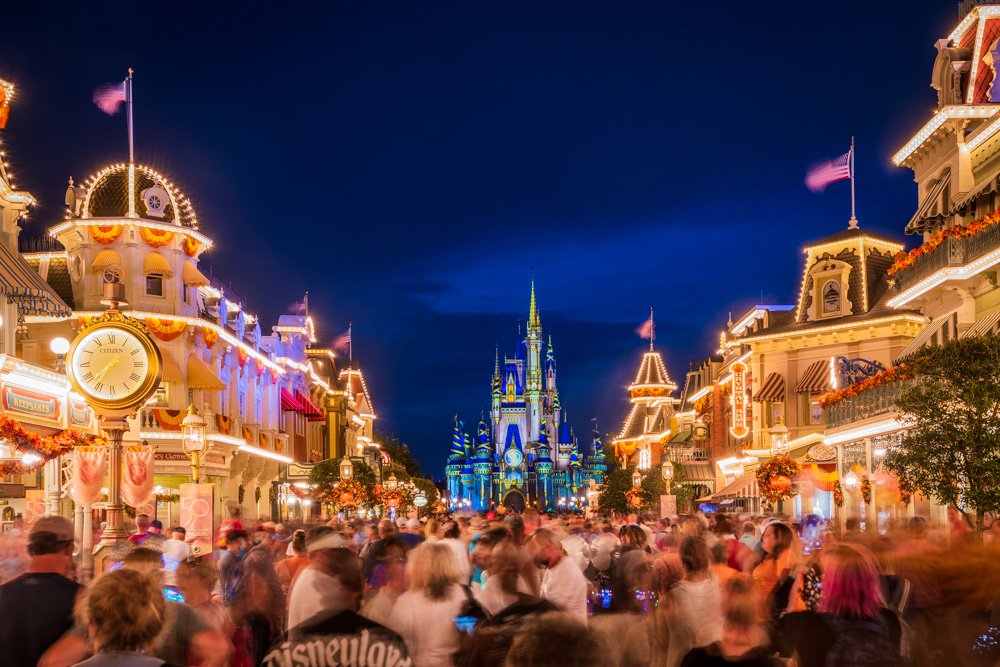 It’s time for a look at October 2021 wait times at Walt Disney World. In this crowd report, we’ll analyze data from the last few weeks since the start of the 50th Anniversary celebration, cover the unsurprising spike, and offer thoughts on what’s likely to happen next with numbers at Walt Disney World this holiday season.

By way of recap, fall off-season arrived earlier and has seen a sharper drop in wait times than normal at Walt Disney World. There were various theories as to why attendance and wait times were so low, and we cover the most—and least—plausible explanations in Walt Disney World’s Lowest Crowd Week of the Last Year.

In our view, the biggest causes were Florida’s run of record case numbers in August and Walt Disney World’s reinstated indoor mask rule. While the mask rule remains, Florida’s latest wave peaked and has dramatically decreased in the last month-plus. That plus the start of Walt Disney World’s 50th Anniversary and fall breaks has resulted in crowds predictably increasing. What wasn’t so predictable–and still isn’t completely–is the degree of the increase…

Every iteration of FastPass ever has caused an increase in standby wait times, so the same should be expected here. It’s just a question of by how much, and to what degree that will impact crowd levels. There’s no useful historical data, since this is the first instance of a purely pay-to-play FastPass system in the domestic parks.

It thus makes sense to make a clear break with some wait time analysis now, and then again in a couple of weeks after Genie launches to have a before and after comparison. With that in mind, let’s dig into this month’s wait times through October 17, 2021…

Let’s start with a high level look at monthly wait time averages across the entirety of Walt Disney World. (All graphs and wait time stats courtesy of Thrill-Data.com.)

October 2021 is decidedly average, sitting at 30 minutes. This is higher than August or September, but significantly lower than July. It’s identical to May and June, which we viewed as “sweet spots” when Walt Disney World was increasing ride efficiency faster than park capacity. However, as we’ll discuss below, the circumstances are very different now.

Next, here’s a look at weekly wait time averages across Walt Disney World. The last three bars are October, plus the end of September.

That green bar is deceiving since this measures wait times rather than crowds. There’s no clean way to quantify the latter, whereas wait time data is pretty easy to track, compile, and analyze. Normally, wait times are a good proxy for crowds, which should make sense intuitively–they usually go hand-in-hand. 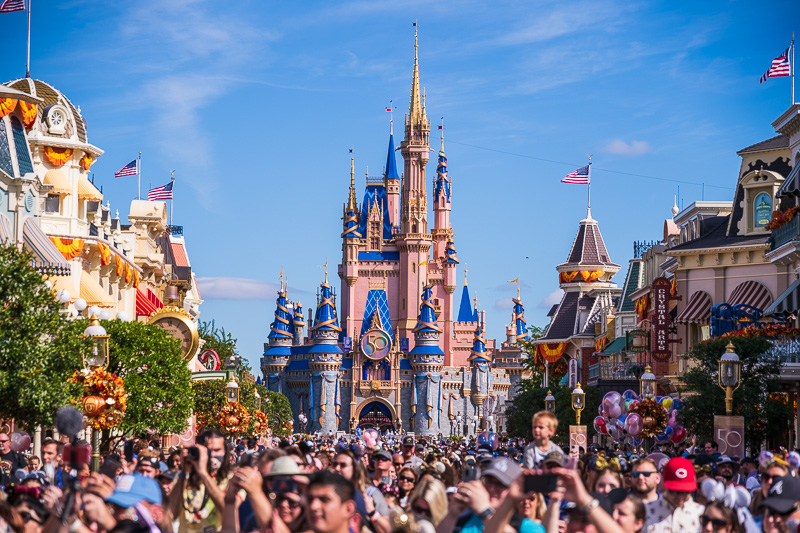 That was not the case for Walt Disney World’s 50th Anniversary kickoff. Despite what the wait times suggest, we can assure you that it was extremely busy that weekend and very busy the following week.

However, guests visiting for the start of the World’s Most Magical Celebration were disproportionately there for the experience, doing things that cannot easily be quantified–and less concerned with attractions. There were walk-on wait times, even for some headliners. By contrast, there were long waits for food, merchandise, and crowds for entertainment. Viewing areas for Harmonious and Disney Enchantment filled up far in advance.

We can see exactly this play out at Magic Kingdom, which had a 1/10 crowd level on October 1 and spiked to 8/10 levels in the last week. While we call these “crowd levels,” they’re more accurately “ride wait time levels.”

This is important to note because, throughout these graphs, you’re going to see green for the first weekend and week of October. That’s totally accurate as far as wait times go, but does not tell the full story. To the contrary, feels like crowds were higher then, and have actually leveled off since.

Contrary to wait times, my anecdotal perception of feels like crowds was actually lower last week than the two weeks prior. It’s just that guest demographics have shifted, and the parks are starting to see more visitors who prioritize rides, so those are increasing whereas feels like crowds are decreasing.

Above is a look at Magic Kingdom wait times by attraction for the last week. Note that this encompasses the Columbus Day/Indigenous Peoples’ Day long weekend and fall break for many school districts.

The highest average wait time was Seven Dwarfs Mine Train at 75 minutes, followed by Jungle Cruise at 71 minutes, Splash Mountain at 64 minutes, Haunted Mansion at 60 minutes, and Peter Pan’s Flight at 58 minutes. Overall, Magic Kingdom averaged 8/10 and 9/10 crowd levels throughout the last week.

Continuing to Epcot, where crowd (or at least wait time) levels have remained moderate. This park continues to be the outlier, just as it has been since summer, with average waits that put it in the 4/10 to 6/10 ballpark for the last week.

Attractions with the longest wait times were Test Track and Frozen Ever After, at 55 and 57 minutes, respectively. Soarin’ Around the World averaged a 34 minute wait time. Nothing else has been above 20 minutes, which is what brought the overall average down so much. If you walked around World Showcase in the afternoon or evening, “low to moderate” probably was not your perception of crowds. Your perception would be correct–again, this is just the wait times.

Animal Kingdom is a similar story to Magic Kingdom. The month started out very slowly, and wait times have since increased, pushing crowd levels to 7/10 or 8/10 most dates (with a couple 5/10s in the mix).

In the last week, the two Pandora attractions are the only rides with significant waits: Avatar Flight of Passage averaging 85 minutes and Na’vi River Journey averaging 44 minutes. Kilimanjaro Safaris and Expedition Everest averaged 36 minutes and 33 minutes, respectively. All those are significantly shorter later in the day–some are even walk-ons.

This continues to be the “busiest” park at Walt Disney World, with average daily crowd levels hitting 9/10 and 10/10 some dates in the last week, before inexplicably falling to 5/10 over this weekend. (If you can make sense of that, you’re smarter than me!)

Wait time averages are skewed by Star Wars: Rise of the Resistance, which is the only attraction to hit triple digits over the last week with an average wait time of 122 minutes. While I cannot say this is always the case, our experience with that ride is that wait times are often massively inflated–there just isn’t a ton of queue space, and higher posted wait times is one way to discourage guests from getting in line.

Still, Slinky Dog Dash is averaging a 91 minute wait–and that’s very high. Same goes for the four other rides with wait times right at 60 minutes. Even assuming the Star Wars: Rise of the Resistance wait is overinflated, DHS was still the busiest park at Walt Disney World in the last week. That’s something that should be anticipated going forward, especially without stage shows to soak up crowds. 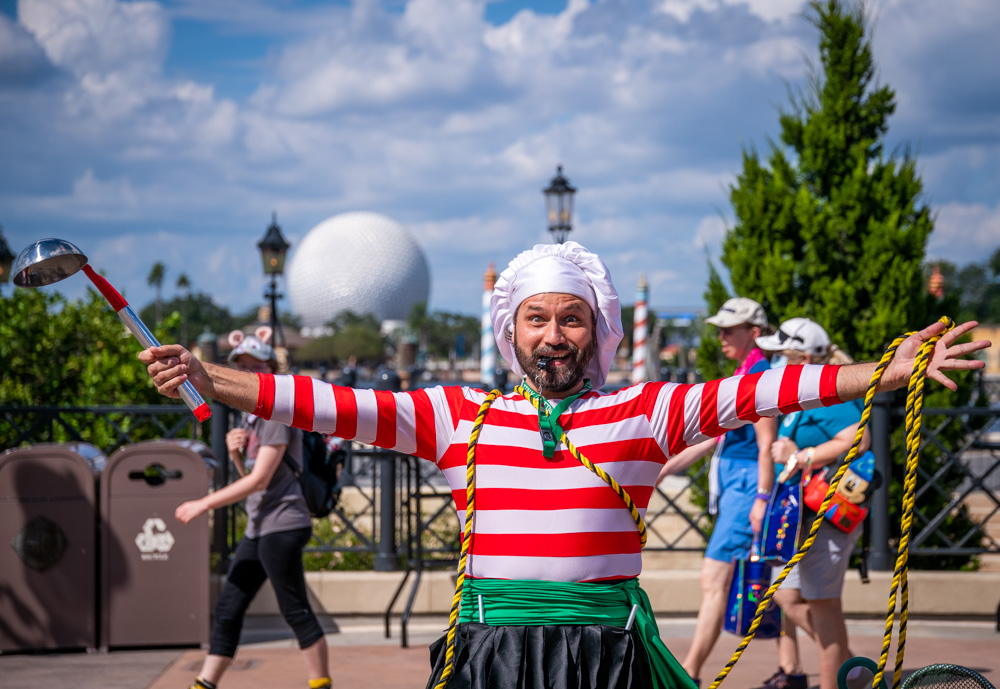 As we’ve reiterated for months, the lack of shows, atmospheric entertainment, and ongoing dining constraints (among other things) can result in “feels like” crowds that are worse than what’s reflected in the wait time data. It’s also likely that with physical distancing gone and “please fill in all available space” back, guest perception of “comfortable congestion levels” is highly variable–especially among those who have largely avoided crowds for the last year-plus.

In terms of our perception as frequent visitors for the last year-plus, October crowds are noticeably worse than September–and have been since the beginning of the month. Contrary to the wait times, this is not a recent development that occurred in the last week. We’d say “feels like” crowds throughout October have been on par with June or last November–still not as bad as July. (Thankfully, the weather has been significantly nicer than summer; that plus significantly lower case counts has also probably played a role in getting locals out of the house and into the parks.) 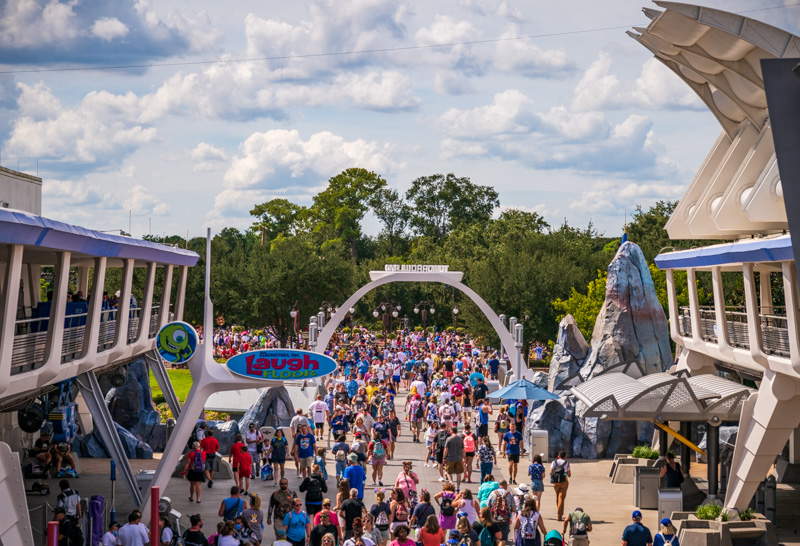 This sharp spike in wait times and crowd levels is still better than what we expected! Despite last week being filled with fall breaks and the holiday weekend, wait times settled in the ~8/10 range. That tracks with feels like crowds, which were surprisingly comfortable. This also suggests a “recoupling” of crowds and wait times, which is presumably because the superfans who showed up for the kickoff of Walt Disney World’s 50th Anniversary have since departed. The visitor profile should once again be more normal, meaning more guests who are focused on riding attractions.

Wait time levels of 7/10 or 8/10 may not sound great, but keep in mind that we previously feared a “crowdpocalypse” situation at Walt Disney World for the last 3 months of the year, with most dates hitting 10/10. Due to lingering pent-up demand, the 50th Anniversary, and sold out hotels, that scenario was entirely plausible. Everyone knew the 50th Anniversary was going to draw big crowds, the question was how much attendance would jump between September and October.

For us, it wasn’t as sharp of a spike as expected. Thus far, it would seem that the wave of cancellations, hotel unavailability, lack of international travel, etc. is taking the edge off–and will probably continue to do so for the remainder of the year. This is precisely why we downgraded forecasts with the latest update to our 2021-2022 Walt Disney World Crowd Calendars. 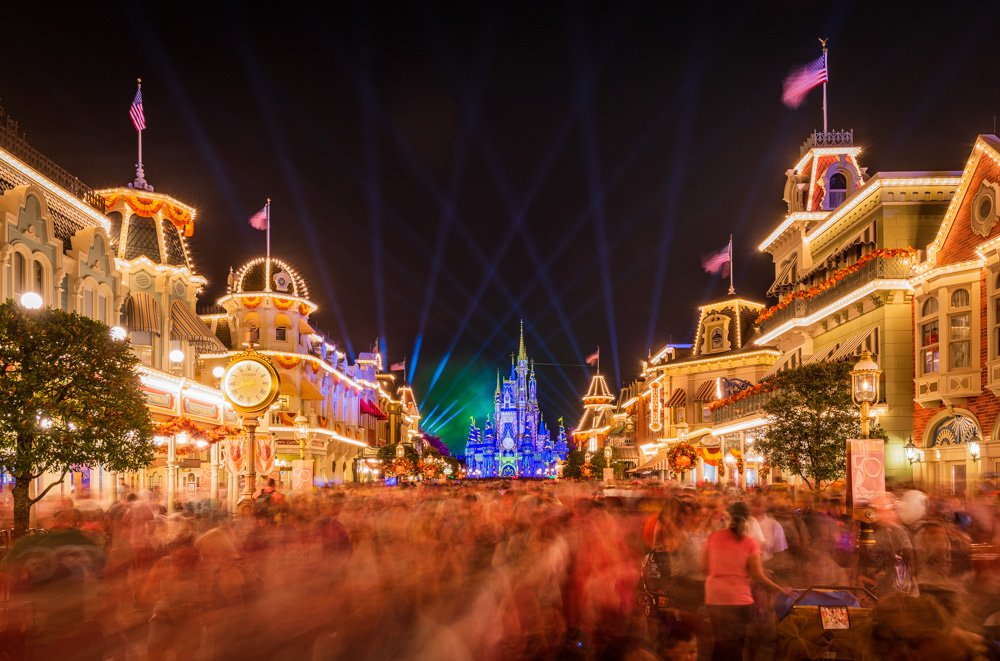 Ultimately, the next ~3 months are going to be busy at Walt Disney World, and none of this is to say otherwise. We would expect crowd levels of 7/10 or higher for the overwhelming majority of dates in the remainder of October, November, and December. Barring extreme weather, there will not be a single 1/10 or 2/10 date for the rest of the year. I’d personally be surprised if overall levels drop below 5/10 for more than 7 days between now and early January 2022.

Whether that’s good or bad news will almost certainly depend upon your expectations. If you were hoping for low crowds this holiday season, it’s sure to be a disappointment. If you were bracing yourself for the absolute worst, there’s cause for mild optimism. Given that we fell into the latter camp–and were warning of ‘record crowds’ for the start of the 50th Anniversary–we’re feeling fairly decently about this. At least, for now. We’ll revisit this sentiment after a couple weeks of Genie+ and Lightning Lanes to see just how poorly it ages! 😉 (Seriously though, if standby wait times remain in the 8/10 range even after Genie+ and Lightning Lanes debut, we’ll consider that a win.)

Predictions for where crowds go from here in the last two weeks of October, after Genie+ and Lightning Lanes launch? What about during the holiday season? Did you visit Walt Disney World during the first three weeks of October 2021? If you’ve visited in prior months during the last year, how did crowds compare between then and now? What did you think of the wait times? Any parks or times of day noticeably worse than the others? Do you agree or disagree with anything in our report? Any questions we can help you answer? Hearing your feedback–even when you disagree with us–is both interesting to us and helpful to other readers, so please share your thoughts below in the comments!