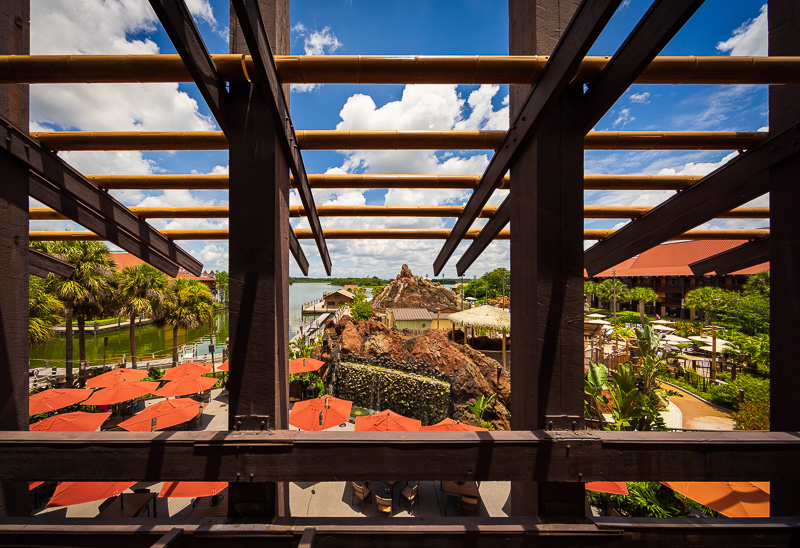 ‘Ohana is a restaurant at the Polynesian Village Resort located on Walt Disney World’s monorail loop with easy and convenient access to Magic Kingdom. In this WDW breakfast review, we’ll share photos of food, thoughts on morning menu, how this meal compares to other options, whether it’s worth the money, and more.

Let’s start with “normal times” background info: ‘Ohana accepts the Disney Dining Plan, but for breakfast it’s an objectively poor use of credits. (As a reminder, although temporarily suspended, we remain hopeful that the Disney Dining Plan will return later in 2021.) The restaurant also accepts the Tables in Wonderland card for a 20% discount, if you somehow still have that. Finally, ‘Ohana offers discounts to both Annual Passholders and Disney Vacation Club Members.

Breakfast at ‘Ohana runs from 7:30 am until 12:00 p.m. every morning, and is a family-style meal. It’s priced at $25 per adult and $14 per child, which is very fair for an all-you-can-eat breakfast at Walt Disney World. In fact, breakfast at ‘Ohana is actually less expensive than it was pre-closure, which is for one big reason…

The modified meal at ‘Ohana for breakfast has no characters, and the price has been dropped to account for that. So if you’ve ever wondered what the “value” is of meeting a character, it’s apparently $4.25 per character! Or maybe it varies by character, with Mickey Mouse being $6 but Stitch only being $2.88. Either way, this breakfast is now $17 cheaper per adult, making it one of the cheaper all you can eat meals at Walt Disney World.

Previously, this was known as the ‘Ohana’s Best Friends Breakfast Featuring Lilo And Stitch, with both of those characters plus Pluto and Mickey Mouse dressed in tropical attire. It was a fun character meal, with a parade around the restaurant, some character hijinks, music, and more.

In fact, we’d say that ‘Ohana’s Best Friends Breakfast Featuring Lilo & Stitch was one of our favorite character meals from the “old school” Walt Disney World character meals. It couldn’t compete with newer options like Topolino’s Terrace, but it nailed the fundamentals and–most importantly–was a lot of fun. Breakfast at ‘Ohana pretty much the same as before, minus the characters and some of the cost. 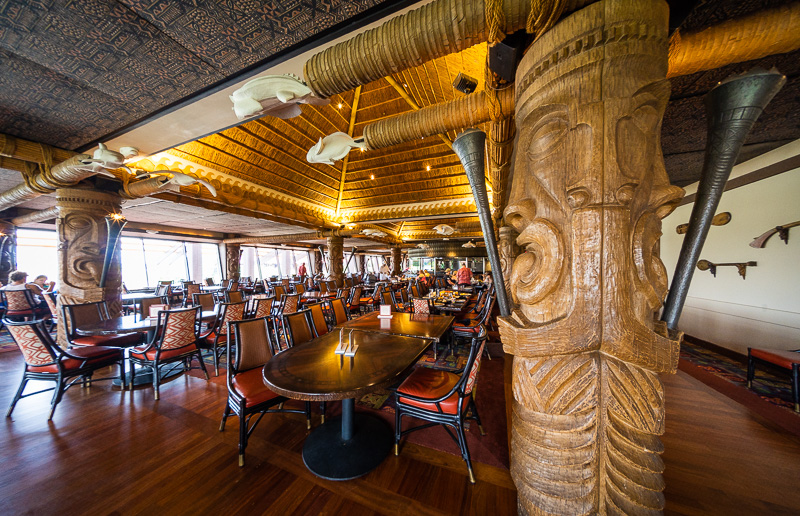 Most guests will be seated in the main dining room at ‘Ohana, which is filled tiki statues holding torches, island animals, other themed decor, plus an abundance of authentic Polynesian patterns and textures. During normal times, this area would be raucous rather than serene, with fun and games for kids.

The center of the room features a vaulted thatched roof, while tables around the perimeter offer exceptional views of the lush hotel grounds, Seven Seas Lagoon, and even Cinderella Castle in the distance. While the design of ‘Ohana is pleasant, what elevates the atmosphere is those views. They’re fine during breakfast, but obviously lacking the fireworks and Electrical Water Pageant that you can see during dinner. 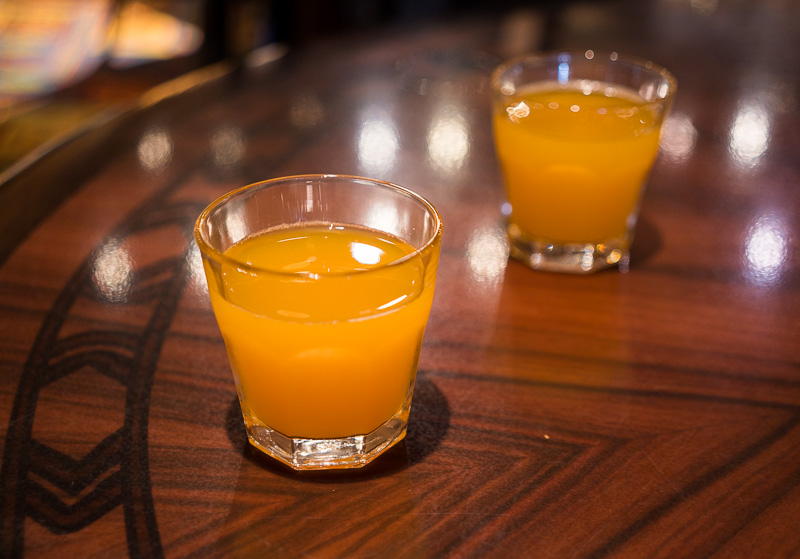 Breakfast at ‘Ohana starts with a drink–sodas, juices, milk, or coffee are all included. We ordered coffee, which was serviceable but nothing special. Same standard issue Walt Disney World coffee you’ll find anywhere.

You’ll also be served an iconic Polynesian beverage: POG Juice. This is a cocktail of (p)assion fruit, (o)range, and (g)uava juices. It’s most commonly associated with the Poly, but you’ll find it at a number of breakfasts under different names–notably, it’s also served at our favorite, Topolino’s Terrace. POG Juice is always a great way to start your day! 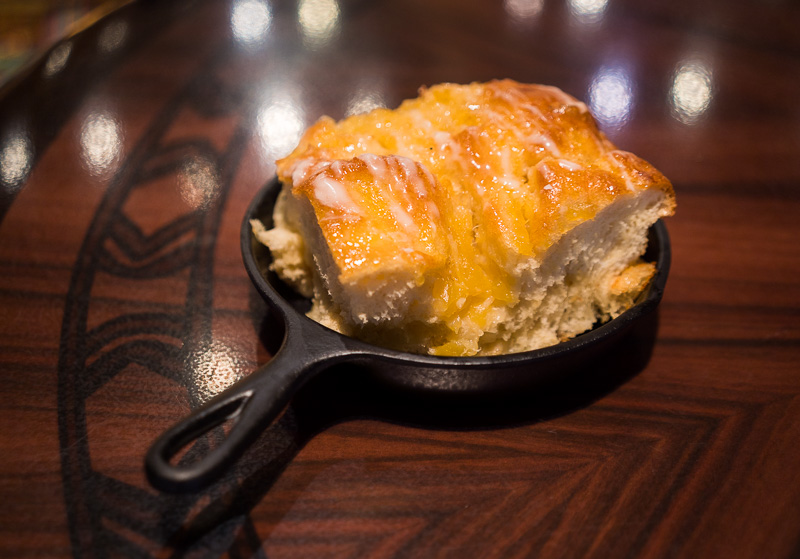 If you’ve read our other all-you-can-eat restaurant reviews, you might be familiar with my “rule” to avoid the low-value filler–salads, breads, vegetables, and so forth. 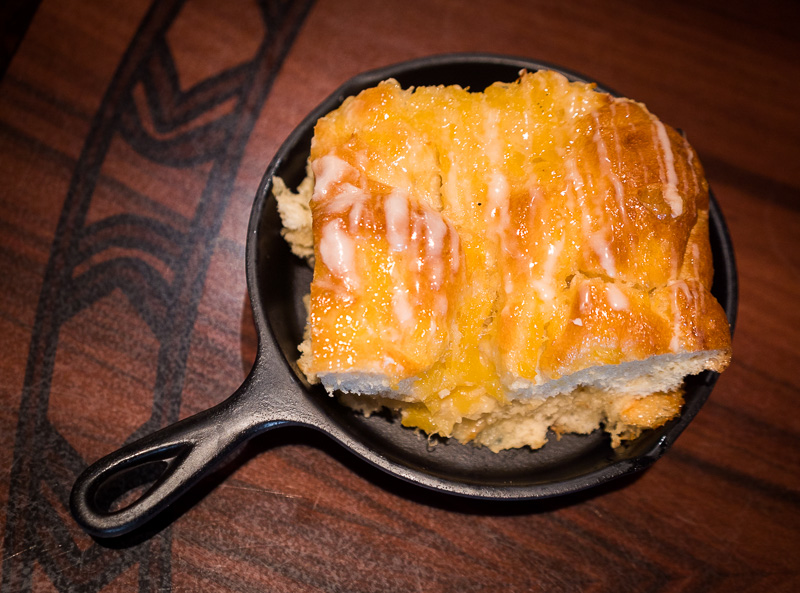 This fantastic Pineapple-Coconut Breakfast Bread is an important exception to that rule.

It features chunks of real pineapple in the bread and the top has more pineapple and is a sweet coconut glaze. This approaches the line between dessert and bread, while not crossing it. Never too sweet or indulgent, and a perfect way to start the day without sugar overload or a heavy dish that’ll put you in a food coma. Basically, it’s a lighter alternative to ‘Ohana’s bread pudding, perfect for those about to walk 10 miles in Magic Kingdom. 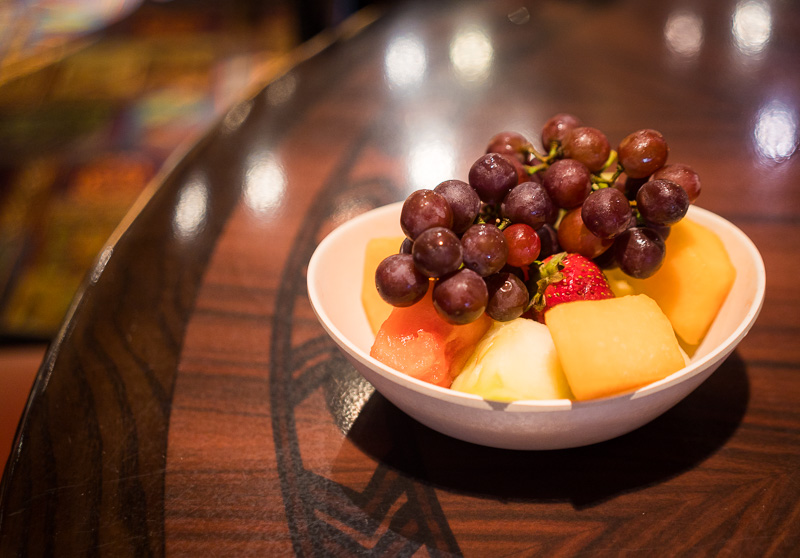 Next, a bowl of seasonal fruit containing grapes, strawberry, watermelon, cantaloupe, and pineapple.

All very fruit-like. Nothing memorable about this, good or bad. That’s about par for the course with Walt Disney World breakfast fruit. 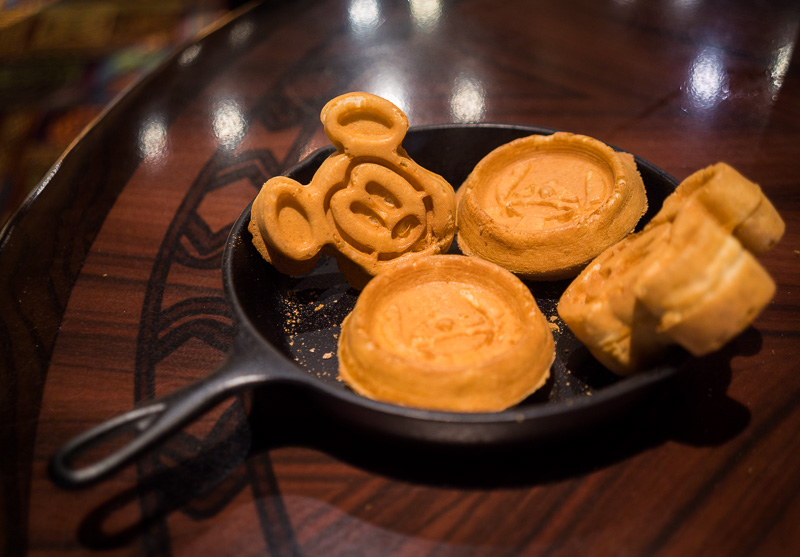 A skillet of Stitch and Mickey Mouse waffles came out next.

I’m not the best judge of these–I think they’re all generally mediocre waffles that get way too much love due to their shape. As far as Mickey waffles go, these were good. Sarah ended up getting more, so I guess that speaks well of them. 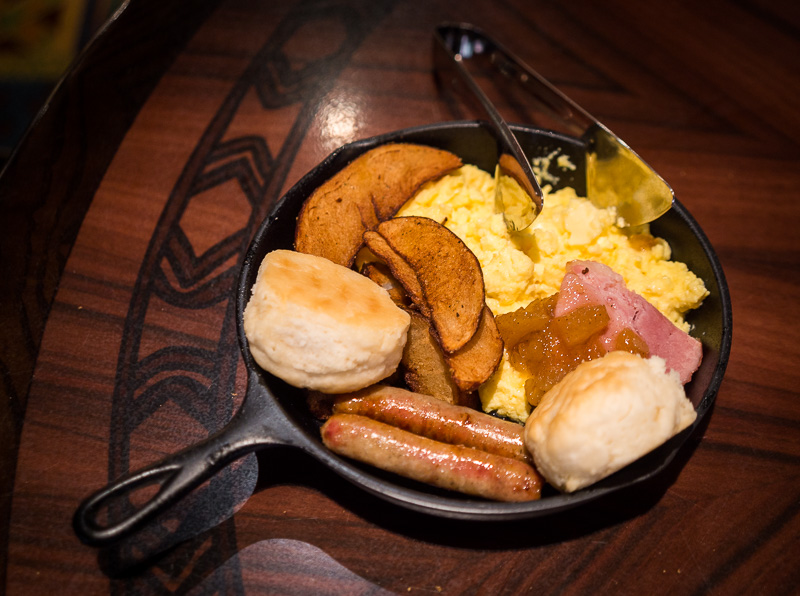 Let’s get the meal’s disappointments out of the way right off the bat. This skillet includes a hearty portion of Walt Disney World’s infamous standard issue reconstituted eggs—the same ones you’d find at literally any counter service food court on property. That’s really the only downside–everything else here is varying degrees of good. 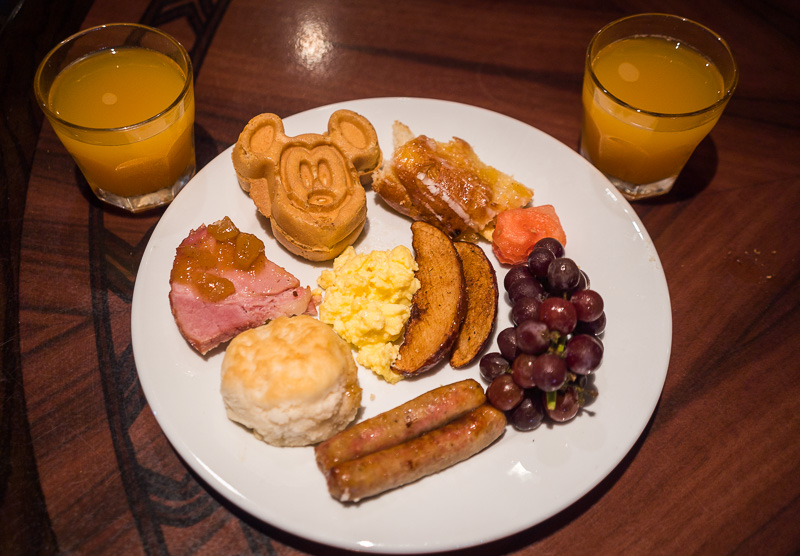 In particular, we both really liked the Hawaiian-style Ham topped with Pineapple Compote and Fried Island-style Potatoes.

The pineapple compote on the ham gave it a nice sweet and savory flavor, while the island potatoes were nicely done with a crisp exterior and soft inside. Nothing revolutionary, but strong incarnations of breakfast classics. 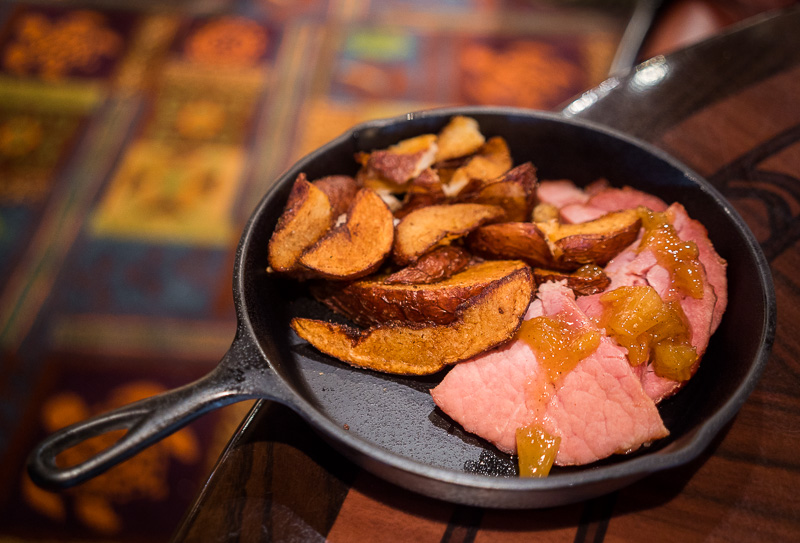 I ended up ordering a second skillet of the Hawaiian-style Ham topped with Pineapple Compote and Fried Island-style Potatoes.

We’ve now done several of these modified family style meals at Walt Disney World in the last few months, and every single time I’ve ordered a refill, that second round has surpassed the first. It’s always (always) fresher and better. If we weren’t doing this for the purpose of a review, I’d be inclined to order a modified skillet from the outset because I’m guessing the refills are newly-prepared whereas the standard skillets are premade and awaiting pickup. Just a guess though–perhaps we’ve had quite the streak of luck. 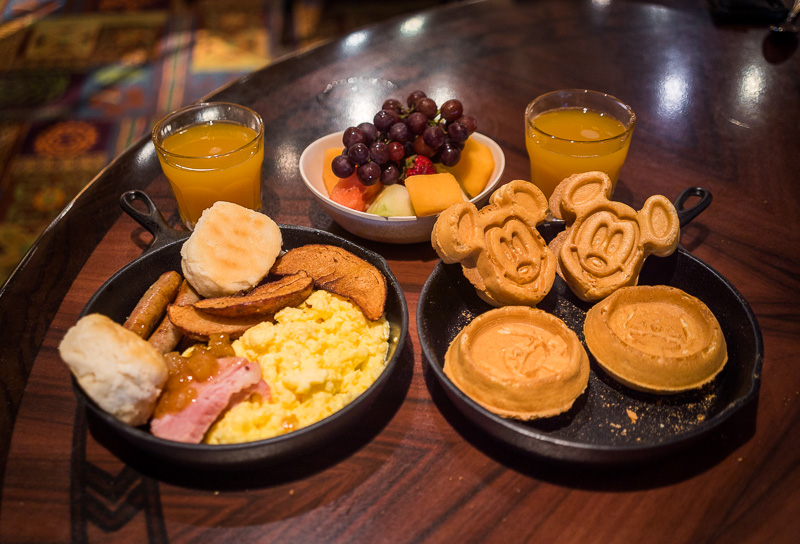 Ultimately, our take on breakfast at ‘Ohana is far more middle-of-the-road than the highs and lows of our ‘Ohana Family-Style Dinner Review. Nothing here was as abysmal as that seafood “casserole” but nothing was as good as the starters for dinner. For better or worse, the breakfast items are all average to good–no problems or highlights, just the classics done well.

Personally, I don’t think breakfast at ‘Ohana is something to seek out, nor is it something to avoid. The morning atmosphere doesn’t have the same special quality as dinner, but it also doesn’t have the same high price tag. If you’re staying elsewhere, it’s not a breakfast worthy of the commute to the hotel. If you’re staying at Disney’s Polynesian Village Resort, breakfast at ‘Ohana is worth considering–especially if you have a family of big eaters. We’d choose Kona Cafe or even Captain Cook’s over ‘Ohana, but that’s just us. Given its attractive pricing–$25 for adults and $14 for kids–we think breakfast at ‘Ohana could still be attractive for hungry families or anyone who wants to do a large/late breakfast and skip lunch.

Does the family-style meal served for breakfast at ‘Ohana sound like it would be worth the money to you? Disappointed that ‘Ohana’s Best Friends Breakfast Featuring Lilo And Stitch isn’t back yet, or do you prefer breakfast at a lower price without characters? Thoughts on the Pineapple-Coconut Breakfast Bread, Scrambled Eggs, Breakfast Sausage, Hawaiian-style Ham, Fried Island-style Potatoes, Mickey Waffles, Biscuits, or anything else on the menu? Will you be booking an Advance Dining Reservation for breakfast here? What did you think? Worthwhile for the food, atmosphere, or for both? Do you agree or disagree with our assessment? Other thoughts or concerns? Any questions we can help you answer? Hearing your feedback–even when you disagree with us–is both interesting to us and helpful to other readers, so please share your thoughts below in the comments!