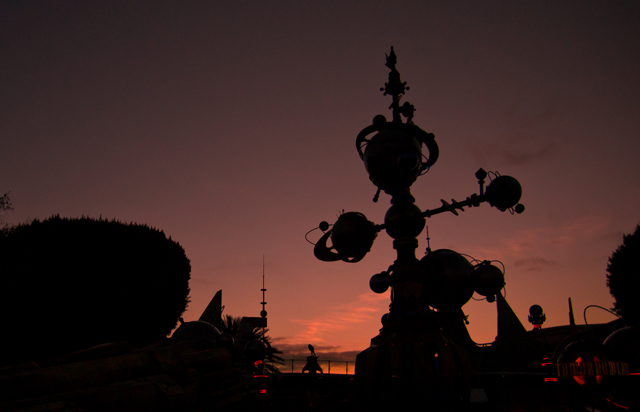 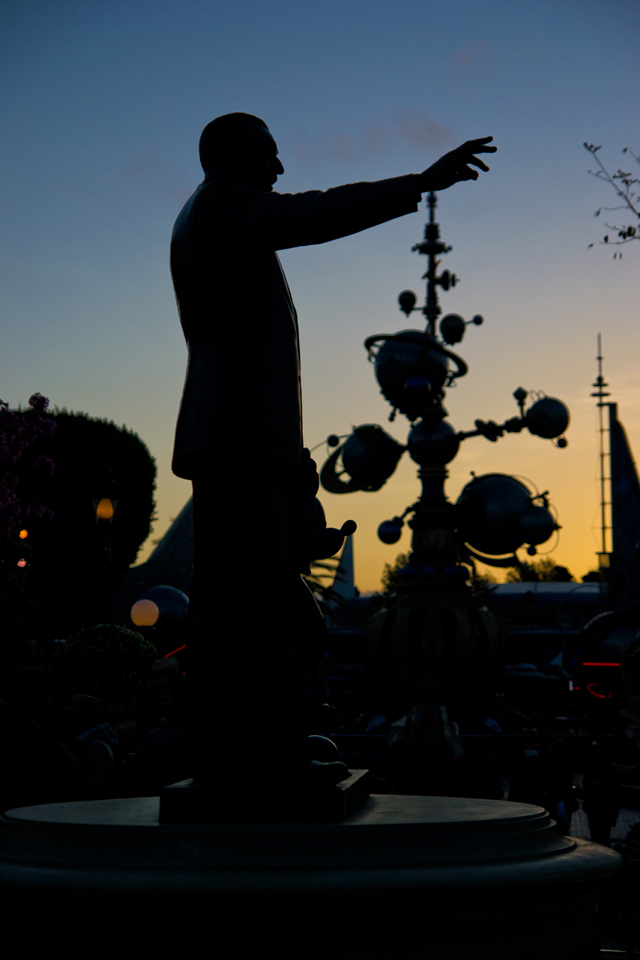 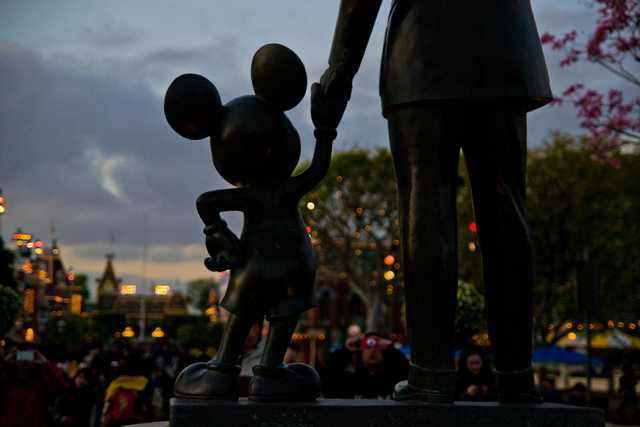 Based upon our experience the previous day, when the “good” part of the sunrise didn’t appear over the park until almost 7 am, I figured there was no way that I’d be able to focus the second sunrise. Much to my surprise, security was in no rush to sweep guests from the park, and continued to allow everyone to grab their final photos of the day. PhotoPass was especially popular at this time, as guests probably wanted their evidence that they survived 24 hours in Disneyland! 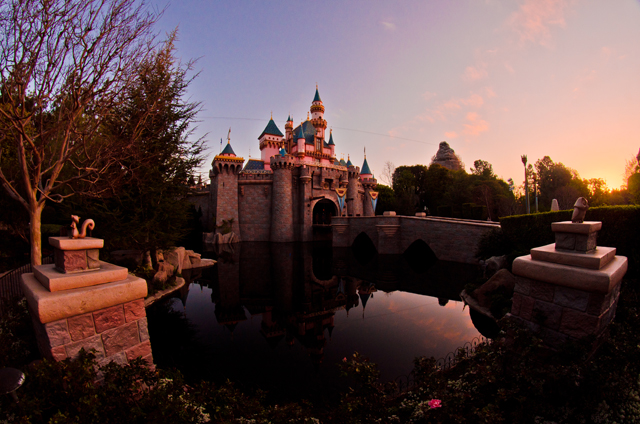 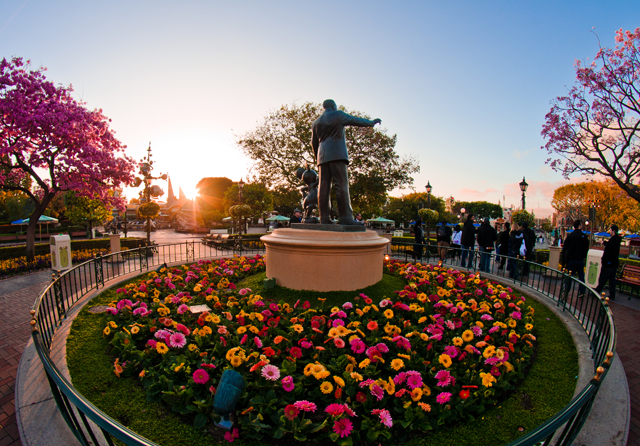 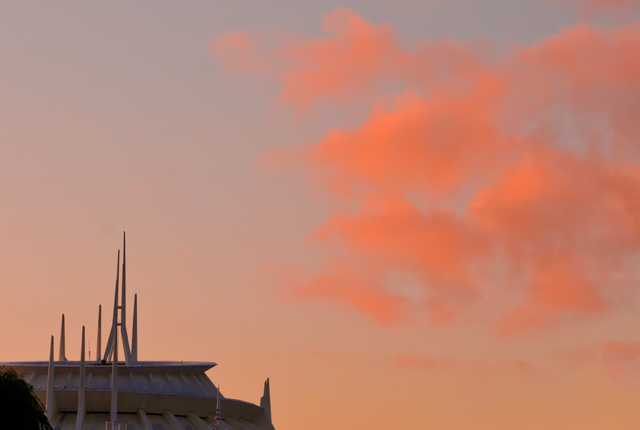 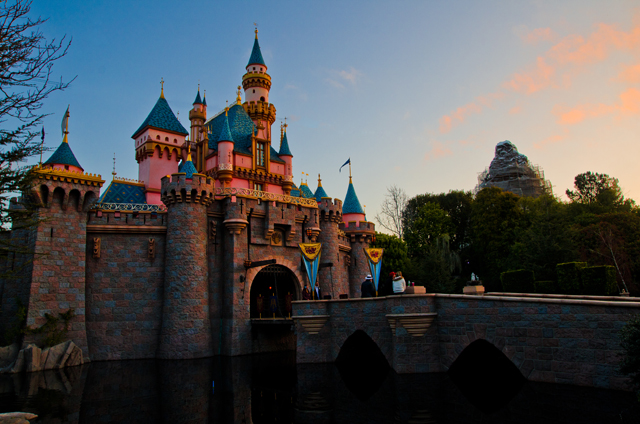 The energy of guests in the hub was great. Everyone was excited, happy, and friendly. Given that many people in this group had been awake for far too many consecutive hours, I was a bit surprised by this. No one I encountered was on edge. Instead, everyone truly felt as if they had been a part of something special. No one was commenting on the lines or crowds. Everyone was just excited to draw their experience to a close. 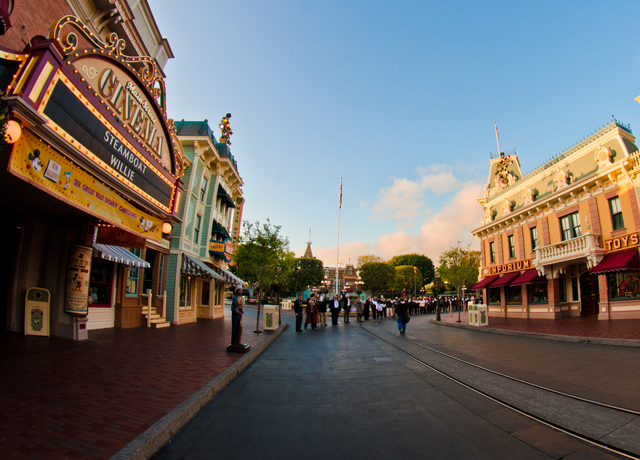 Walking down Main Street at the end of the day gave me a tremendous feeling of satisfaction. I know staying in a theme park for 24 consecutive hours isn’t really much of an accomplishment in the grand scheme of things, but I felt a tremendous sense of accomplishment.

At the end of Main Street were dozens of managerial Cast Members waiting to high five the last stragglers as they exited the park. I’ve never run a marathon (although I wouldn’t be surprised if I walked 26.2 miles during the course of that day!), but I imagine this is what coming to the finish line of a marathon is like. It really felt amazing, and seeing so many genuinely happy Disneyland Cast Member faces was icing on the cake. Throughout the entire day, the Cast Members at Disneyland were awesome. Even as things got busy and crowded, my encounters with them were always wonderful. They seemed especially elated and energized at the end of the event, and I’m sure they felt a great sense of accomplishment for pulling the event off! 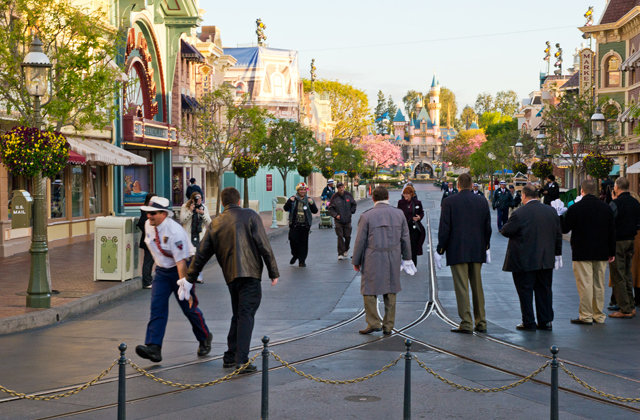 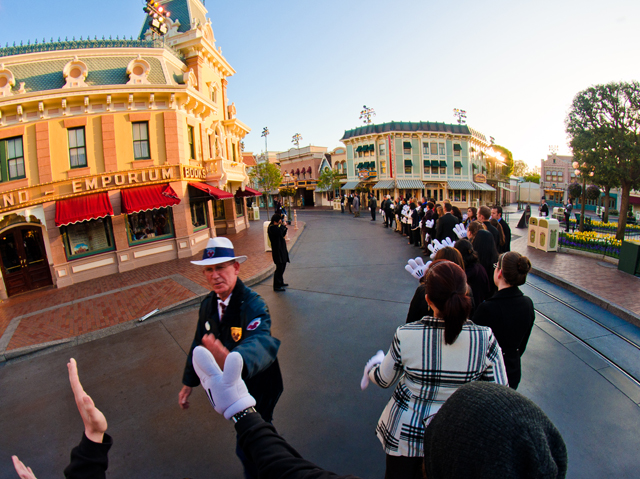 After all of us crazy straggling guests were cleared past this receiving line of Cast Members, Security Cast Members came running down the line, giving high fives to all of the managers and other Cast Members as they passed. I’m not speculating here–there was definitely a sense of accomplishment and elation among these Security Cast Members. They had done a great job managing everyone during “One More Disney Day,” and I assume it was a fairly busy day for them (even if most guests were well-behaved). They really deserved the congratulatory high fives. 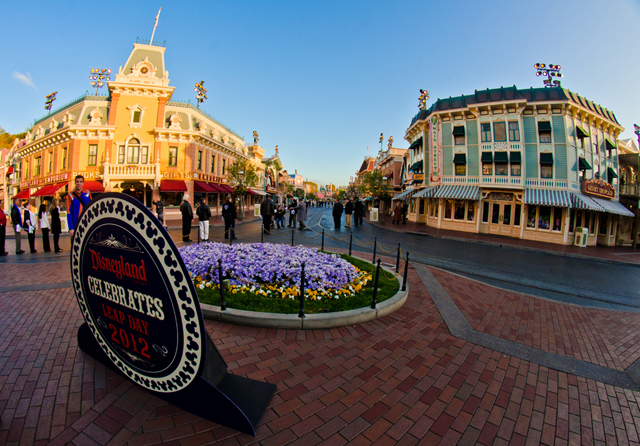 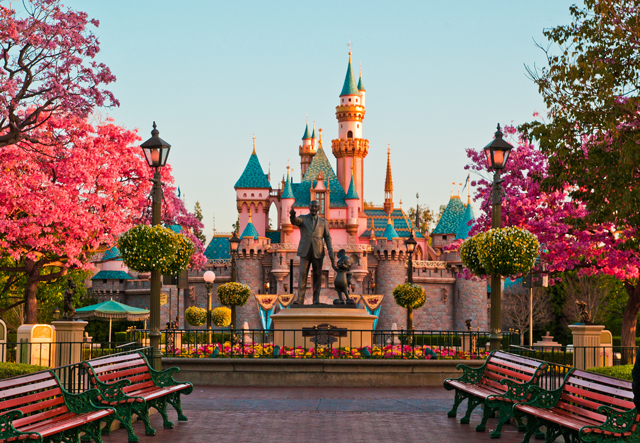 Even though I was in the park for over 24 consecutive hours, it felt as if the day had flown by. I think this is partly because of how truly exhilarating and special the day was. Not only was the weather perfect, but the day just exuded fun. It was a really special experience in a day that just can’t be articulated into words. It had a kinetic energy that made me smile from ear to ear almost the entire day.

I’ve said it before, but this really can’t be overstated: “One More Disney Day” was absolutely amazing. Reading this report, it may seem like it was just a normal day with some special meet & greets and food, plus insane crowds and long lines. That couldn’t be further from the truth. It was an incredible experience, and it’s probably difficult to fully explain that after the fact in words. 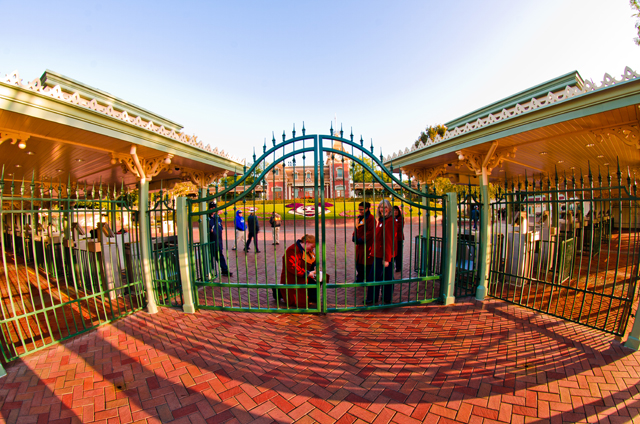 This sentiment wasn’t unique to us. Despite the lack of sleep, throughout the day and night, everyone was in a chipper mood, as guests reflected back on other such similar experiences as the opening of the original Star Tours, Grad Nights, Captain EO re-opening, various New Year’s Eves, and other similar events. Although my experience is entirely anecdotal, I didn’t encounter a single person who was not enjoying the festivities of “One More Disney Day” who was actually in the park, and I did engage a fair number of random guests during the course of the event. The general sentiment I encountered regarding “One More Disney Day” was that it was an awesome and unique experience. Many felt that it was something Disneyland should do more frequently. This is something I’ve consistently heard since returning home. People can’t wait for the “next” 24 hour event. At one point I probably thought it was a one-and-done event. Now, I’m not so sure. The demand is certainly there and both Disneyland and Walt Disney World saw huge numbers of guests during the event.

I almost didn’t want to leave the Esplanade, wanting to savor every last bit of the day (plus, I think the coffee REALLY jolted my system). I still couldn’t sleep when we got back to our hotel room, so I checked Twitter, expecting to see others sharing their positive sentiments regarding “One More Disney Day.” I was a bit shocked when I saw a lot of negative comments about the event. Comments ranged from dubbing it “One More Disney Disaster” to criticizing it as a colossal embarrassment for Disney and a waste of time for guests. Unsurprisingly, many of these comments were from people thousands of miles away from the actual event or from those bitter that they couldn’t enter Disneyland the previous night. I am a bit puzzled how someone who wasn’t even in the state, let alone the park, is qualified to declare Disneyland’s “One More Disney Day” as a disaster.

This is something that seems endemic in the Disney fan community, and the same sentiment coming from the same vocal minority gets tiring. To be sure, there were legitimate reports of some issues, but much of the complaining was seemingly done by those “fans” who are eager to find any faults with anything Disney does. I think constructive criticism of the Walt Disney Company is very important as a check on the Company’s actions, but condemning an action or offering of the Company in a snide and contemptuous way serves no beneficial purpose. The individual doing the condemning may feel some misplaced sense of joy or satisfaction, but it is in no way actually productive. In fact, if anything, it incentivizes Disney to disregard all feedback that “serious” fans offer, as someone is always bound to complain about something. When you complain about everything, you invalidate even your meaningful complaints. (I remember learning that from some childhood fable about wolves…)

Nothing in life is perfect. This is especially true when you take a first of its kind event and add a record crowd to the mix. There will be some snags along the way. To fixate on the imperfect does a disservice to the wonderful, albeit slightly imperfect, aspects of life. It doesn’t take much effort at all to reflect upon the wonderful aspects of “One More Disney Day” at Disneyland.

Like I mentioned above, it was my best day ever in Disneyland.

PLUG: since the whole purpose of taking the trip was to create the Disneyland: Sunrise to Sunrise eBook, the majority of the “best” photos I took on “One More Disney Day” are not presented here. If you like Disney photos, I strongly encourage you to check out the eBook, Disneyland: Sunrise to Sunrise, by clicking here. If eBooks don’t interest you, fret not, as there are still a lot of good photos here, but they’re generally the ones that didn’t make the cut.