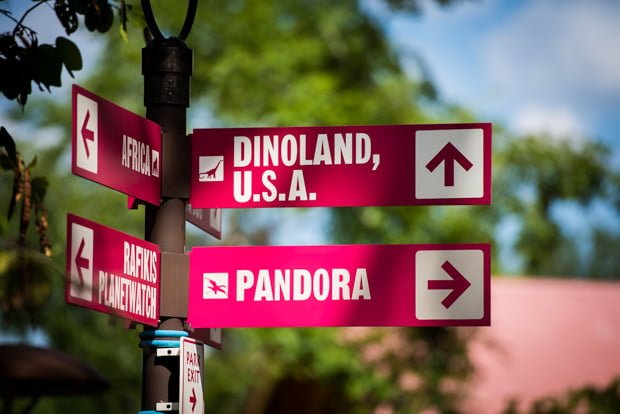 Hype is actually an interesting word to use here. Is there really any? While no official cost has been released, Pandora’s price tag is in the hundreds of millions of dollars, easily north of $500 million. Disney has engaged in a marketing blitz for Pandora and some fans are quite enthused about the addition, but it does not seem to be garnering the same level of buzz as other recent additions.

This is at least somewhat surprising to me, as I’d hazard a guess that the only larger investments Disney has made stateside since the opening of Animal Kingdom are the Disney California Adventure overhaul and the NextGen initiative. I’d be surprised if Cars Land alone or New Fantasyland cost more, yet both generated more fanfare. It’s possible Pandora is overshadowed by the upcoming Toy Story and Star Wars Lands, perhaps people don’t care as much about the movie, or maybe, after almost 6 years of development, people are a bit burned out…

One thing still boggles my mind about Pandora, and that’s the dismissive attitudes I’ve seen from those who don’t like or don’t care about Avatar. Prior to the announcement of this land, it never would’ve crossed my mind that the source material for something in the facts could detract from enjoyment of the theme park experience.

When the original announcement of an “Avatar Land” was made in September 2011, like most people, I was puzzled. Even at that point, it appeared unlikely that Avatar had longevity. However, I felt it was pretty comparable to Splash Mountain–few guests have seen Song of the South, yet the attraction is beloved as a standalone experience. (Edit: others disagree, and I think the way Steve put it in the comments is a very fair point.)

Over time, I figured people would come around on this Avatar Land, much the same way. Seeing what and how Imagineering would integrate the environments of the movie into Animal Kingdom would convert people. To their credit, this has occurred with many Disney fans. It also has not occurred with a lot of others.

It’s as if many are entrenched in their initial hot takes from 2011 or are uninterested because they didn’t like or remember the movie Avatar. Think of it this way: would you enjoy Haunted Mansion less if someone made a long-forgotten movie about it? Because if you think you would enjoy it less in such a scenario, I’ve got some news for you…

If it would make you enjoy Pandora – World of Avatar more, just forget about the movie. Most people have. I cannot name a single character from it nor do I remember the plot. Aside from knowing that the characters in it looked sort of like “blue alien smurf kittens” (and I only know that because it’s become a running joke), I have no interest in Avatar.

Likewise, I have no interest in Harry Potter or Cars. Well, beyond Mater’s Tall Tales, but we can all agree that’s a national treasure and that the fact that it doesn’t have a showcase of awards basically invalidates the whole concept of awards.

I will say that I think the lingering question of “why Avatar?” remains one worth asking. I do have mixed feelings on this too, though. On the one hand, choosing a franchise with emotional resonance for some visitors undoubtedly makes for a more powerful experience.

Choosing one without relevance also makes for some potentially awkward connections in the land–places where you can sense a tie-in to something, but you’re not sure what or why. Thankfully, the instances of this in Pandora are fairly minimal. (It’s also worth noting that Avatar does have upcoming sequels planned, and while that’s become a bit of a running joke, I’d never underestimate James Cameron. It’s still within the realm of possibility that Avatar will become a huge franchise.)

On the other hand, I question whether choosing a popular franchise as the basis for a land presents the opportunity for theme park designers to rest on the IP’s laurels. With emotional attachment already established for some visitors, does the land have to be as good to be labeled a “success” in the eyes of those fans? The Wizarding World of Harry Potter is the obvious example here, but I’d argue that it never even gets near this question, because its lands are so good.

If anything, Star Wars Launch Bay and its associated entertainment are more telling. Despite being total garbage, fans continue to eat that up for the chance to meet characters from the films and see Star Wars experiences. (To its credit, it appears that Star Wars Land will make Launch Bay, etc., look like that amateur-hour temporary entertainment that it is.)

Still, Launch Bay is an imperfect example because it’s not a land. As with the Wizarding Worlds, Cars Land is also a poor test because it’s actually good. I don’t think we’ll have a true test of this theory until Toy Story Land opens. The future of theme parks is clearly in lands of this type, but addressing these ‘theories’ head-on is probably well beyond the scope of this post. I’d better cut this tangent off now unless this review is going to broach 10,000 words…

With way-too-much prefacing out of the way (have I lost you all yet?), we’ll start the review with the land of Pandora itself. I approached Pandora – World of Avatar with a blank slate, just as I’ve approached virtually every theme park area ever (unless you count the American Adventure, as I had visited America before visiting Epcot).

From that perspective, I really enjoyed Pandora – World of Avatar. By and large, the environments speak for themselves. There are some details that (I assume?) are lifted from the movie, but they also work in the land and add layers of detail and depth to it. Without any context, you can deduce the meaning behind these things, and I think they help add to the land’s mythos.

I do think that Pandora works well within the archetype of Animal Kingdom. When you think about it, the park is not primarily about animals. They are the MacGuffins or perhaps motifs–the impetus behind most attractions–but they are not the defining themes. Those are the culture and similar ideas of conflict, exploration, etc., addressed above.

All of those same themes are found in Pandora. It’s certainly not just a glorified commercial for the upcoming Avatar sequels, and it’s not even just a pretty place with floating mountains and blue aliens. There is an underlying culture and other themes to explore and almost all of this is not reliant upon the movie.

There’s a lot of subtext, and it can be gleaned mostly from paying attention to what you see throughout Pandora, not any familiarity with the movie. In fact, the spots where Pandora alludes to elements of the film actually resonate less with the guest, I think.

The places where Pandora – World of Avatar loses me are almost exclusively when RDA comes into the picture. Perhaps this is personal, but I’d like seeing that minimized even further, and more focus paid to Alpha Centauri Expeditions (ACE) and the Pandora Conservation Initiative. After all, the latter two better reflect the overarching message of Animal Kingdom itself.

There’s also just a lot of flat-out beauty. The Valley of Mo’ara is absolutely breathtaking and there is so much to see. It would appear that careful consideration has gone into crafting a faux ecosystem, and building that as it would appear in the natural world.

I guess you could say it’s a form of biomimicry, but with the design also being ‘natural.’ I don’t know if there’s a term for that, but Rohde and co. should coin one if not, as the environment they’ve created here is truly special. I’m not one for overwrought backstory, but I’d love to read something about what went into the design of Pandora’s ecosystem.

Suffice to say, Pandora is very good and works well within the context of Animal Kingdom. It really doesn’t have any analogue at Walt Disney World. For that type of comparison, I think it makes most sense to compare Pandora to stylistically-similar lands in other Disney Parks around the world. If there’s any “unique” perspective I can offer on Pandora, it’s probably this.

The lands I’d consider its closest counterparts are Cars Land at Disney California Adventure, Mysterious Island at Tokyo DisneySea, and Treasure Cove at Shanghai Disneyland. Really, Treasure Cove and Cars Land are the best comparisons, but everyone seems to love hearing whether something is “Tokyo DisneySea-quality” so I threw that last one in there to give the people what they want.

This is not necessarily a knock on either of those lands–they’re both modeled after towns/villages and thus walking down a street makes sense in both. By contrast, Pandora is alien-nature, and embraces open-world exploration. There are paths criss-crossing the land, giving it a real choose your own adventure vibe. (It never becomes disorienting or confusing–the layout is great.)

The question about whether Pandora is DisneySea-quality is trickier. That park is a scenario where the whole is more than the sum of its parts, and cherrypicking elements of other parks and asking whether they are DisneySea-quality sort of misses the point. After all, Tokyo DisneySea has Mermaid Lagoon, which is a land full of dressed-up off-the-shelf amusement park rides for kids, and no one really bats an eye at that. If the bar is Mermaid Lagoon, a lot of stuff could technically qualify as DisneySea-quality.

With that caveat out of the way, I think Pandora has a level of detail on par with Tokyo DisneySea, and by that, I mean its better lands. Pandora reminds me a decent amount of Mysterious Island. I’m sure that is going to lose serious DisneySea fans, but stick with me…

Both lands chronicle humankind’s exploitation of land and the struggle between humans and nature. Both feature a large, iconic centerpiece. Both use largely mythical creatures and also illustrate themes of conflict and exploration. Both are based upon intellectual property with which their primary audiences are unfamiliar. 😉 Heck, both lands lack background music and instead use sound effects.

The visual depth and beauty of the Valley of Mo’ara cannot be overstated. For practical purposes, this is the best “attraction” in Pandora – World of Avatar (and I mean attraction as a synonym for draw–I’m not trying to suggest Pandora “actually” has 3 attractions). It transports visitors to an alien planet for them to freely explore, offering a visual feast with many surprises along the way. (This is my take even before having seen Pandora at night.) On Page 2, we’ll review Avatar Flight of Passage and Na’vi River Journey…