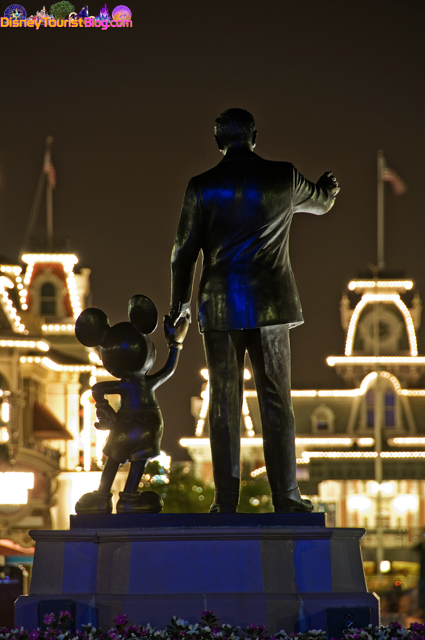 I imagine, the time period of this statue being right around the time of Walt’s death. In this interpretation of the statue, I imagine Walt saying, “Mickey, go forth and lead our Kingdom.” Mickey undoubtedly personifies the spirit of Walt Disney, and through him, the Disney Kingdom has prospered and grown far beyond Walt’s wildest dreams. It is obvious to me that Cast Members, from the artists in Tomorrowland painting Donald Duck with water on the pavement with mops to the entertainment talent, and beyond. Many in the Company seem to temper their decisions by asking thesmelves, “What would Walt think of this?” It’s a difficult act to constantly be second-guessed by the mandates of a creative genius who has not been with us for decades, but such is the nature of the beast. It’s a tough act to follow given the magic that embodied Walt, but it is one that so many individuals in the company embrace. Kudos, Walt Disney Cast Members, on a job well done.