Construction walls are up around most of Paradise Pier, as this Disney California Adventure land transforms into Pixar Pier. We had a chance to stroll around Disneyland Resort yesterday, and wanted to report back with a few photo updates, starting with Pixar Pier.

There are a lot of large projects throughout Disneyland Resort right now, and it’s most definitely a return to the “refurbishment season” that have typified the early months in the past. The list of refurbishments in Disney California Adventure and Disneyland is long, with construction walls abounding. Of these projects, Pixar Pier is the largest (I’ll stop short of calling it “the most ambitious.”)

The silver lining in all of this is that the return of “refurbishment season” plus a scaled-back SoCal resident ticket deal plus no Main Street Electrical Parade has meant a return of off-season crowds. That’s right! It once again feels like a “normal” January at Disneyland, and while the number of closures and the miles of construction walls are a bummer, we are absolutely savoring the low crowd levels. It’s a totally worthwhile trade-off in our estimation.

A lot of people are still (understandably) confused about what’s part of this project, so let’s start with that. The conversion to Pixar Pier means the closure/conversion of Ariel’s Grotto, Cove Bar, California Screamin’, and all of the gift shops on the pier side of the area. Basically, anything between Ariel’s Grotto and the old Maliboomer is being Pixar-ified. (Plus Mickey on the Fun Wheel.)

Anything between Silly Symphony Swings and the Little Mermaid ~ Ariel’s Undersea Adventure will become a new land called Paradise Park. If that sounds unnecessarily convoluted and pointless, that’s because it is. I’ll spare you further ranting about Pixar Pier, as I’ve already done that in this post, and likely will do more of it once this half-baked idea comes to fruition. 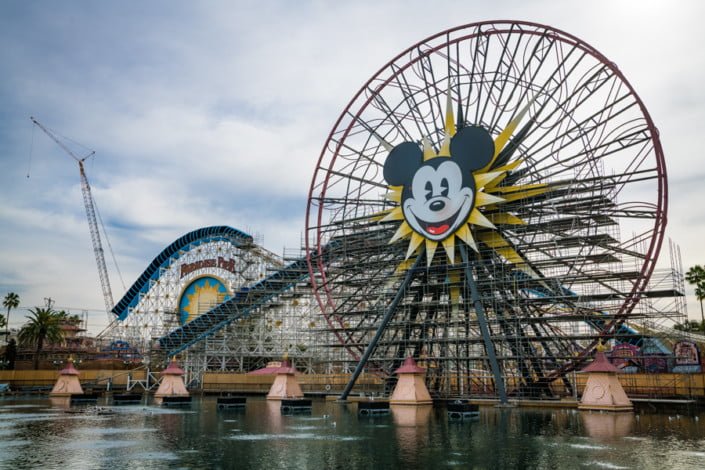 Just as confusing as the concept of Pixar Pier is scope of the construction project. As much is clear based upon the signs throughout the area pointing guests in the direction of the attractions that remain open (namely, Toy Story Mania).

Anyway, let’s take a look around at some of the work being done: 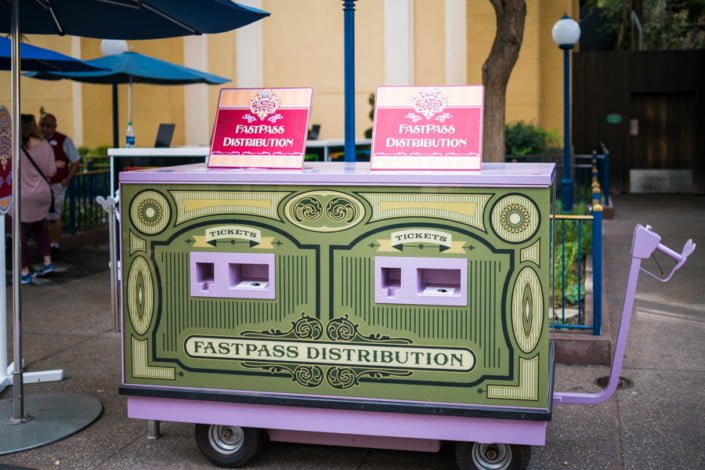 Not really work, per se, but here’s the temporary distribution for Toy Story Mania FastPasses, which is near the Little Mermaid dark ride.

Word of Color FastPass distribution is also here. If you’re going to be in Disney California Adventure during Lunar New Year, we highly recommend checking out World of Color for the “Hurry Home” tag. It’s beautifully-done. 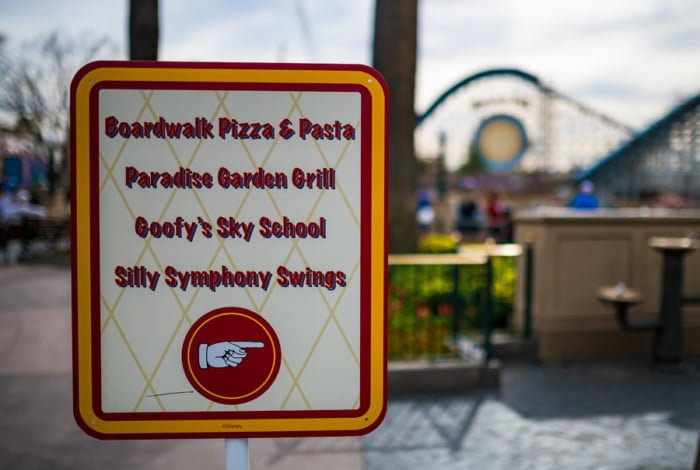 There are a few of these signs plus a number of Cast Members stationed around Paradise Park to answer questions about what’s opening and what isn’t.

We’ve also observed a ton of roaming characters in this general area. Spontaneous interactions with characters from the Incredibles and Country Bear Jamboree (same general area, but more towards Grizzly Peak) are a ton of fun. 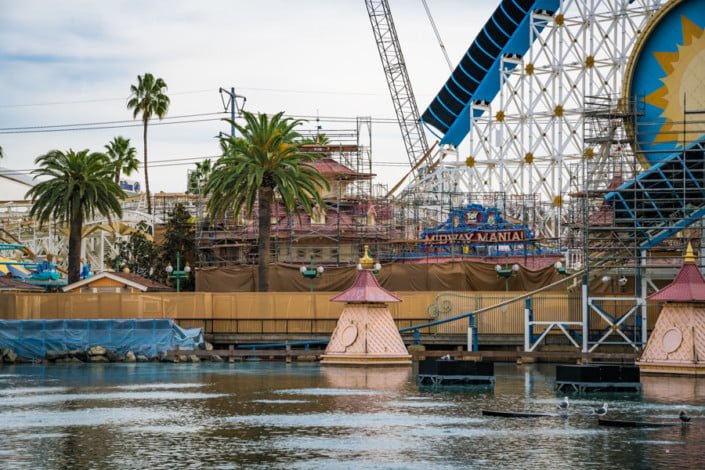 Toy Story Mania is open during this construction, but from a distance, it sure doesn’t look like it. We can see why this would be confusing to some guests.

It undoubtedly would’ve been easier for Disney to just close the pier completely. With the low crowds this month, they probably don’t need the capacity. For the sake of guest satisfaction, it’s nice that they’re still operating Toy Story Mania. So kudos there, I guess. 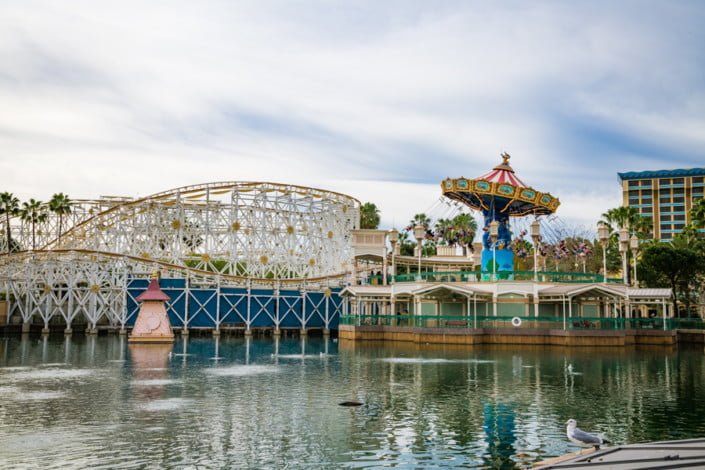 On the left side of this photo, the former location of the Maliboomer, is where the concept art showed an Inside Out swing attraction (coming at “a later date”).

It has been widely speculated that this will be a relocated attraction from ‘a bug’s land’, which is expected to close for Marvel Land. With zero rumors of late about those developments, we’re wondering whether if that later date is now even later…or not at all. 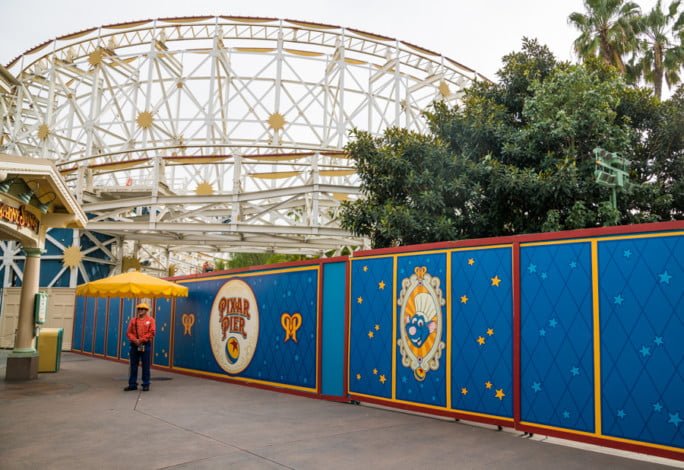 The wall you’ll encounter on the Silly Symphony Swings side of Paradise Park.

WIZARD, YOU SHALL NOT PASS. 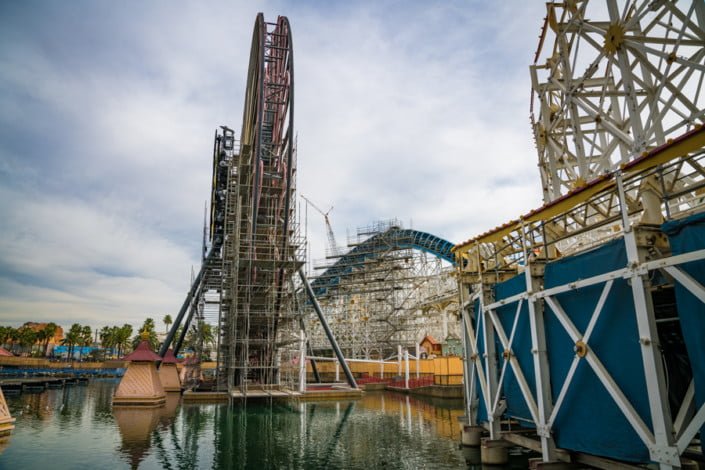 The Fun Wheel’s buckets have been removed, and a ton of scaffolding now surrounds the Ferris Wheel.

As with many other locations around Paradise/Pixar Pier, it seems a lot of routine and overdue maintenance is occurring along with the Pixarification of the area. While I’m totally on board with the latter, the attempt to shoehorn Pixar into the entire pier is too much. 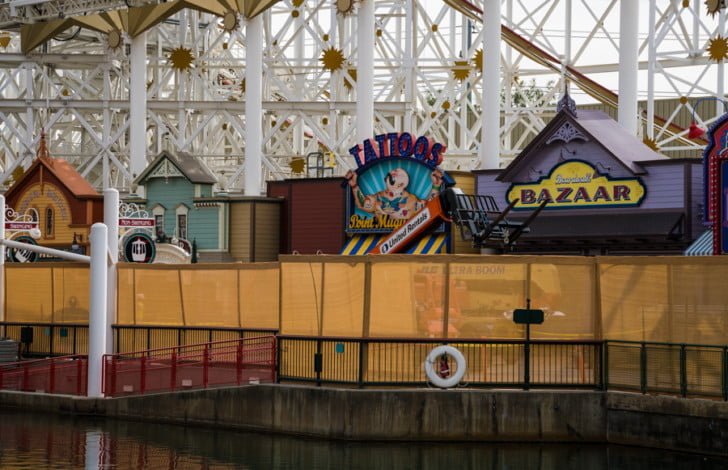 All of these shops will be rebranded to Pixar-inspired locations.

While many of these facades changed to tone them down ahead of DCA’s big relaunch, there were still a lot of remnants of DCA 1.0, especially inside the shops. I don’t think any of this will be missed. 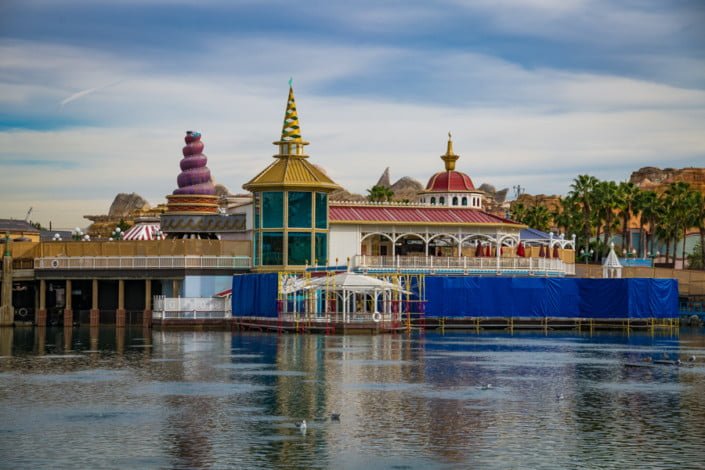 It appears that a lot of work is being done to the former Ariel’s Grotto location, with a sign being spotted that reads “Avalon Cove – Family Buffet.”

For those who don’t recall DCA 1.0 history (we don’t blame you), this location was originally Avalon Cove by Wolfgang Puck. The sign appears to be new, not one that was uncovered under a layer of something else. The name Avalon Cove is a solid one, and a nice nod to Disney California Adventure history–if that’s what it ends up being. 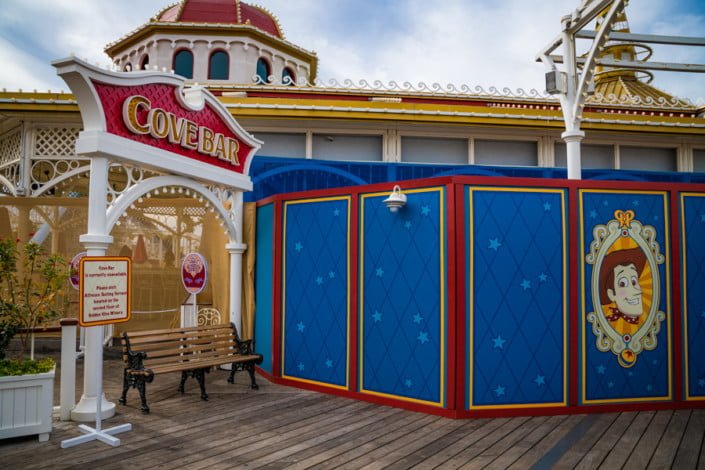 Cove Bar is closed during the refurbishment, and it’s unclear to what degree this popular location will change.

As much as we used to love Cove Bar, its outsized popularity exceeded its actual quality in the last few years. We’re ready for something new here. 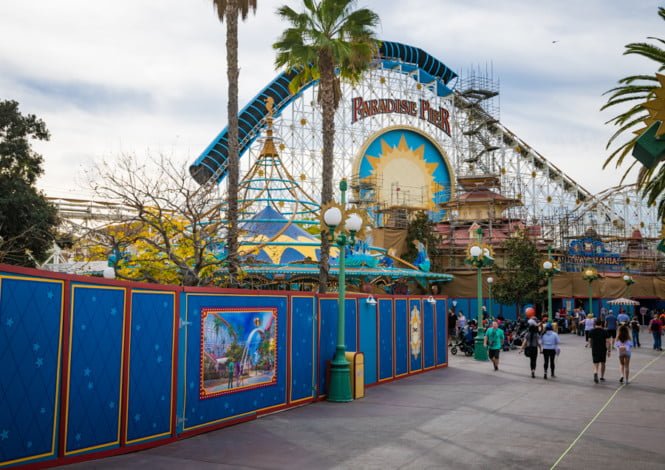 The coaster formerly known as California Screamin’ is now being converted to the Incredicoaster, and is totally behind walls. 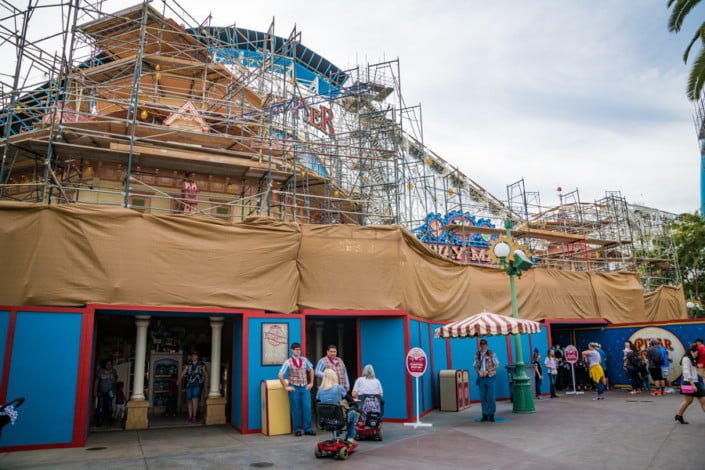 The entrance to Toy Story Mania, which remains open during construction. Wait times are all over the place for the hard-to-find attraction, sometimes being as low as 10 minutes. (On the higher end, we’ve seen 45 minutes, too.)

At this point, it’s unclear when Pixar Pier will open. Many guests are assuming it will debut April 13, 2018 at the start of Pixar Fest. This Disney Parks Blog post (from last November) providing info about Pixar Pier stated: “Pixar Pier will open during the limited-time Pixar Fest celebration, which begins April 13.”

That is not stating that Pixar Pier will open at the start of the celebration, just that it’ll open sometime during Pixar Fest. If you go to the more recently-added Pixar Fest page on Disneyland.com, there is not even any mention of Pixar Pier. Given that and the scope of construction we observed, I think it’s a safe bet that Pixar Pier won’t debut at some point until mid-Summer 2018. We had heard the original goal was Memorial Day, which is an obvious choice, but if I had to guess, July 4, 2018 seems like a more realistic target.

Anyway, that’s it for this Pixar Pier Construction Update. We’ll likely report back with another progress report before the project wraps up, but probably not for a few months until things have noticeably changed. To the extent that the work impacts guests, this should be about it.

What are your thoughts on the Pixar Pier conversion? Did you realize the scope of the work was this extensive? Have you visited DCA during this off-season? Any questions? Hearing feedback about your experiences is both interesting to us and helpful to other readers, so please share your thoughts or questions below in the comments!