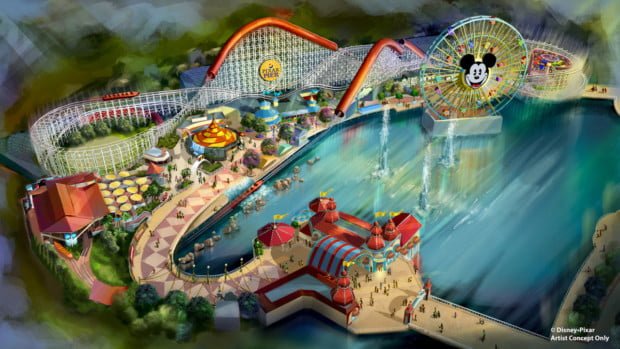 As previously announced, Pixar Pier will open at Disney California Adventure in Summer 2018, replacing Paradise Pier. The re-imagined land will feature the Incredicoaster based on The Incredibles, at least one new(?) spinner attraction, and newly themed attractions, food spots, and merchandise locations throughout.

Pixar Pier will be a permanent land on what is now the California Screamin’ side of Paradise Bay, and will replace what is now one cohesively themed land with several, disjointed neighborhoods that thematically make zero sense in a park named Disney California Adventure.

Disney Parks Blog released new info today on the redesign after the previous announcement over the summer at the D23 Expo raised more questions than it answered. While today’s article answers a lot of those questions, it also raises plenty of questions of its own. Namely, WHY?! (Also, does this mean we’re saying “bye” to A Bug’s Land?) We’ll cover the details of the announcement, plus some speculation and commentary of our own in this post…

The first of the four themed neighborhoods guests will find is based upon The Incredibles. This will be anchored by the Incredicoaster, which is a permanently transformed version of California Screamin’. The Incredicoaster will feature a mid-century modern loading area, new character moments, and a new look for the ride vehicles.

It appears that there might be an enclosed section of the attraction (perhaps with a show scene?) at the ride’s finale.) To prepare for this transformation, California Screamin’ will permanently close on January 8, 2018. 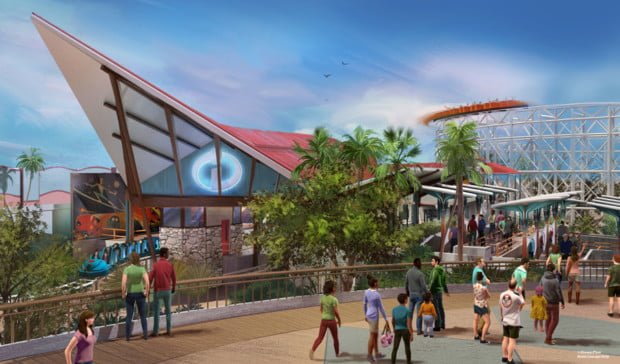 It stands to reason that King Triton’s Carousel will be reskinned to something based upon The Incredibles, but no details were given on that front. If the concept art is any indication, it could be more enclosed than how it appears at present.

The next neighbor is just an extension of Toy Story Mania, and it seems doubtful will add anything beyond what’s already there.

The third neighborhood will be inspired by Inside Out, and will be found on the western side of the boardwalk. Curiously, Disney announced that this will also add a new family-friendly attraction, scheduled to open at a later date.

Inside Out is Pixar’s one exceptional film from recent years, and an imaginative trackless dark ride would make the rest of this half-baked “transformation” forgivable. So of course, we’ll probably get a reskinned version of Francis’ Ladybug Boogie instead.

The fourth neighborhood will be a celebration of many of your favorite Pixar stories. In other words, this is a catch-all. In this neighborhood, Mickey’s Fun Wheel will have a new look, with each of the 24 gondolas featuring different Pixar characters. Fortunately, the iconic face of celebrated Pixar character Mickey Mouse (wait what?) will remain on the Paradise Bay side of the wheel. The Games of the Boardwalk and shops in this area will be Pixarified, too.

We’re up to what, neighborhood 5? That’ll be re-branded versions of Ariel’s Grotto restaurant and the Cove Bar. It’s unclear whether these will have characters added to them or not. Seems slightly ‘off brand’ to have family-friendly characters pitching booze, but I propose Cove Bar becomes Crush’s Bar. I’ve never pegged alcohol as Crush’s vice of choice, but this is California, so perhaps some modifications can be made to this bar to accommodate.

The remaining areas of the land that is now Paradise Pier, including Paradise Gardens, Silly Symphony Swings, Jumpin’ Jellyfish, Goofy’s Sky School, Golden Zephyr and The Little Mermaid ~ Ariel’s Undersea Adventure, will become a new land called Paradise Park. It sounds as if none of this will be touched.

As for my reaction…what’s the point? Both in the reaction and in doing this project in the first place? This all strikes me as a rather pointless exercise. California Screamin’ is a fairly beloved attraction that is popular among tourists and locals, and I have a tough time seeing how this change will move the needle one way or the other after the initial surge of people wanting to see what’s changed.

The rest of what’s happening in these neighborhoods appears to be fairly trivial renaming and re-skinning. Hard to see that being any sort of being a big draw. A carousel with King Triton at the center is more or less going to draw as many people as one with some Pixar carousel. People are going because it’s a carousel, not because it’s the pinnacle of attraction storytelling.

Above all else, I keep coming back to why?! It seems like this brings little-to-nothing of substance to the table, while being a serious blow to the thematic cohesiveness Disney worked so hard at giving to DCA just ~5 years ago. Part of that project actually consolidated lands, and made the park more seamless. Now, the goal here is to undo some of that?

Moreover, the next time you see some video of a celebrity Imagineer touting how important “story” is to their creative process, and really going that extra mile to pat themselves on the back about their latest masterpiece, ask how much of that really matters to Disney, and how much of it is simply slick marketing.

I know to some Disney fans, it’s heresy to criticize anything the brilliant Imagineers do, but they are keen on publicly praising their own work, and in so doing open themselves up to such criticism. (This isn’t to say some of their projects aren’t praise-worthy–most are, but fans should not just eat up whatever Imagineers spoon feed to them.)

If story and thematic integrity were paramount, projects like this wouldn’t happen in the first place. Paradise Pier was not a perfect land, but it was an idealized version of California’s seaside parks, and fit perfectly in Disney California Adventure. It could’ve used some placemaking and an strong attraction anchoring it (to further distance itself from the seaside parks it romanticized), but it was thematically apt for the park in which it existed.

The same cannot be said for Pixar Pier and its various neighborhoods, all of which only exist to help explain away why all these disparate movies (plus Mickey Mouse) are being crammed into one incredibly small space. It probably does not need to be noted, but Pixar is not a theme. It’s a filmmaking division.

The one item of interest here, and what was conspicuously not announced but is visible in the concept art, is that there’s a “new” spinner ride in the old plot of the Maliboomer. Our guess is that this is Flik’s Flyers, and the reason it was not mentioned in the press release is that Disney is not ready to announce details about the closure of A Bug’s Land. This certainly would fit with the rumors about Marvel Land replacing A Bug’s Land.

It’s certainly possible DCA is adding another spinner of exactly the same style, but that seems highly unlikely. More likely is a splashier announcement at a future date about Marvel Land, followed by another announcement of further additions to Pixar Pier. If this is the case, it’s possible a couple of the A Bug’s Land attractions will be relocated to Pixar Pier. (Hence our depressing “joke” above that Inside Out will probably have its first attraction be a spinner, rather than something truly befitting of that exceptional film.)

Beyond that, I don’t really know what to say. Incredicoaster could be fun in isolation, especially if there’s a show scene towards the end, but it does not exist in a vacuum. And California Screamin’ is already a very strong attraction, so why mess with it? The relocated attractions from A Bug’s Land also make some degree of sense, although I hope they don’t absorb this land’s expansion pad (once rumored to be for the “Museum of the Weird.”) The rest of this all seems like a waste of time and a step in the wrong direction. I guess we shall see.

Do you agree or disagree with our take on the addition of Pixar Pier to Disney California Adventure? Are you excited, angry, or indifferent? Any questions? Hearing feedback about your experiences is both interesting to us and helpful to other readers, so please share your thoughts or questions below in the comments!