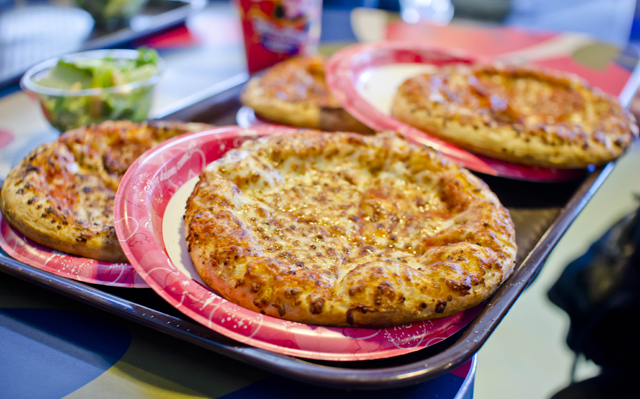 Toy Story Pizza Planet in Disney’s Hollywood Studios at Walt Disney World is a quick service restaurant serving pizza, pizza, and more pizza…and a few other things. This post includes photos of the food, along with our thoughts on this restaurant and its ambiance. As of early 2016, Pizza Planet is closed until November 7, 2016 for refurbishment.

Due to the length of this refurbishment and the fact that Toy Story Land is being constructed elsewhere at Disney’s Hollywood Studios, there are rumors that Pizza Planet will be re-themed. Prior to the Toy Story theme, it was originally to be part of a larger Muppet Studios mini-land that included “The Great Gonzo’s Pandemonium Pizza Parlor,” MuppetVision 3D, and another restaurant themed to the Swedish Chef.

Now, many people believe this will finally come to fruition, with Toy Story Pizza Planet potentially becoming “Swedish Chef’s Cooking School” or Gonzo’s Pizza Parlor. It seems just as likely that these “rumors” are actually wishful thinking based on a bit of deductive reasoning resulting from premises we know to be true. I guess we will know for sure in the fall, but here’s some old info on Pizza Planet for now…

Pizza Planet is open for both lunch and dinner, and offers indoor seating with two levels, and an arcade on the lower level. In addition to the varieties of pizza, Pizza Planet also carries salads and meatball subs. It participates in the Disney Dining Plan as a counter service credit. It does not accept the Tables in Wonderland card for a 20% discount. As far as value goes, Pizza Planet is neither a good nor bad value on the Disney Dining Plan (see our ranking of the best value quick service restaurants here).

Pizza Planet is supposed to be themed like the restaurant by the same name from the hit Disney-Pixar film, Toy Story. I suppose as far as nailing the ‘dive pizza joint’ theme goes, Pizza Planet succeeds in spades. However, I’m not sure this is such a compliment. The theming of Pizza Planet is very utilitarian, with little done on the inside to execute the Toy Story theme. It’s also incredibly loud thanks to the arcade, and it’s always a popular lunch and dinner option with families, making it both busy and chaotic. If you’re looking for a quiet place to relax away from the hustle and bustle of the theme park masses, Pizza Planet typically is not the best of choices.

As for the food, Pizza Planet is a mixed bag. It serves, almost exclusively, the type of food that is stereotypically associated with theme parks. Cheap and greasy mass-produced pizzas are the main draw here, with meatball subs and uninspired salads as an afterthought. Restaurants like Pizza Planet give Walt Disney World dining a bad reputation, and because of poor guest planning, many people assume the only thing Walt Disney World restaurants serve is burgers, hot dogs, and pizza like this. Obviously that is not true, but the reputation persists. 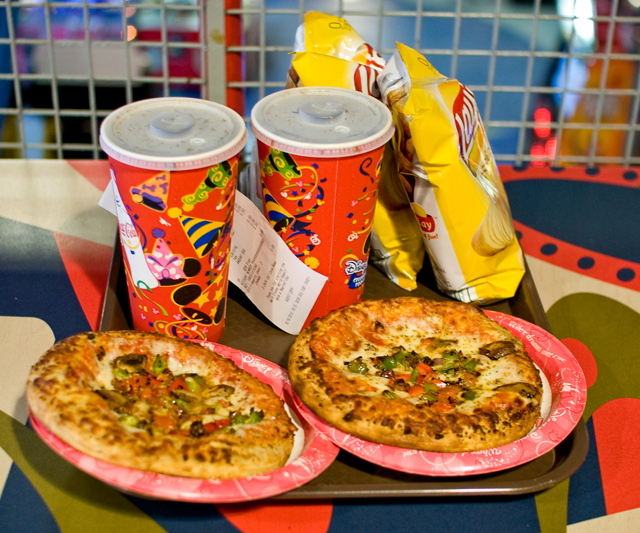 All of that said, Pizza Planet is a bit of a guilty pleasure for us. If you eat this type of food in moderation, and go in expecting greasy fast food pizza, pizza at Pizza Planet isn’t a half-bad meal. Still, whenever we leave there, we feel like we’re doing some sort of walk of shame on the way out.

In terms of value, Pizza Planet isn’t half bad, either. You receive a personal pizza of the plain cheese, pepperoni, or a veggie variety, and a Caesar side salad all for around $9. If you’re paying out of pocket, this is a really good value (as mentioned above, on the Dining Plan you’re better off eating at somewhere more expensive to maximize “value”), and you might actually be able to split a meal between two adults. $5 or so for a meal at Walt Disney World is a relative steal! The desserts also are pretty good (because they’re often brought over from Starring Rolls). If you go at an off-hour and eat outside, the place isn’t that busy, and you have a nice view of the courtyard by MuppetVision.

Of course, the pizza isn’t the best stuff on earth, and isn’t nearly as good as the flatbreads that have been introduced at many Disneyland restaurants (and hopefully are making their way to Walt Disney World!), but it isn’t terrible, either. It’s all about expectations: if you go in expecting a pizza like you might order from Dominos or Pizza Hut, you’ll probably find Pizza Planet enjoyable. If you expect something that you might find at a gourmet New York or Chicago pizzeria (or even something on par with Via Napoli in Epcot), you will be incredibly disappointed. Expect a pizza that will taste approximately “$9 good,” (adjusted for “Disney inflation) and you shouldn’t be disappointed. 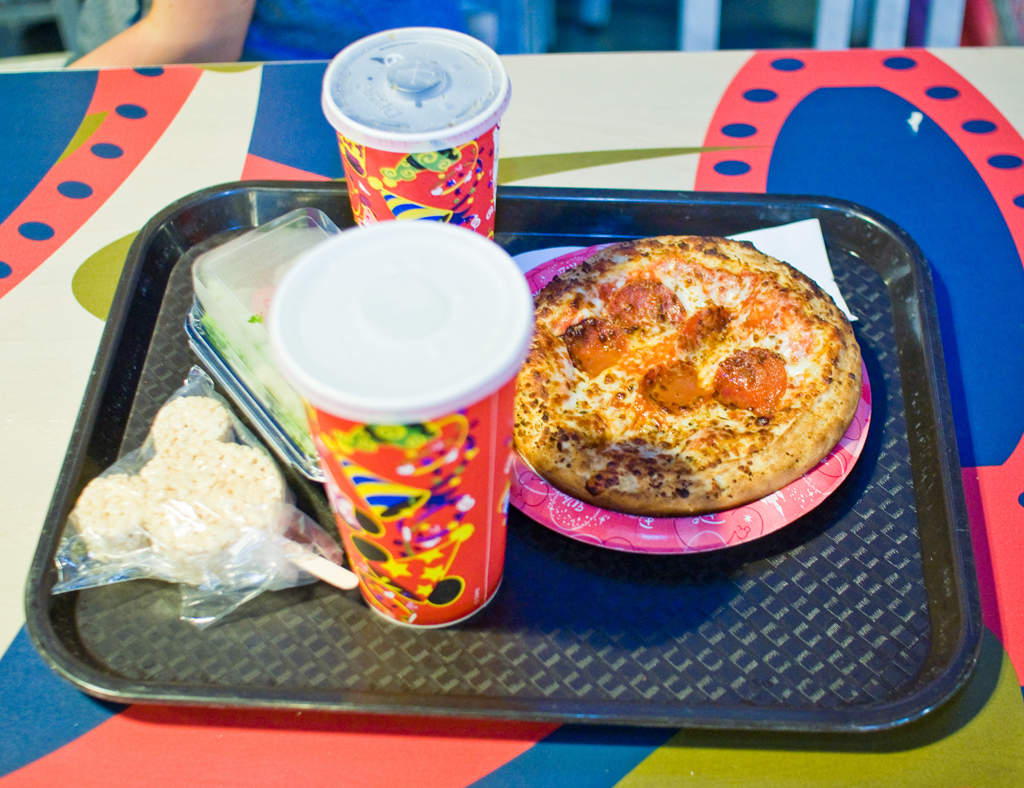 Overall, as mentioned above, Pizza Planet is a guilty pleasure of ours. While we eat there on occasion and continue to go back on rare occasions, there are too many caveats (don’t go when it’s busy because it’s crowded and loud, expect greasy and mass-produced pizza, etc.) to really give Pizza Planet a high score. Pizza Planet is probably best for parents with children who are picky eaters, enjoy arcades, or Toy Story. The rest of us should only visit Pizza Planet if we want to try a “guilty pleasure” (emphasis on the guilty) or want to check every Walt Disney World restaurant off our “list.”

What do you think about Pizza Planet? Is the food just so-so, or is it a great value for families with things kids will actually like? If you like it, which pizza (or non-pizza) is your favorite? If you don’t like it, why not? Share your thoughts in the comments.