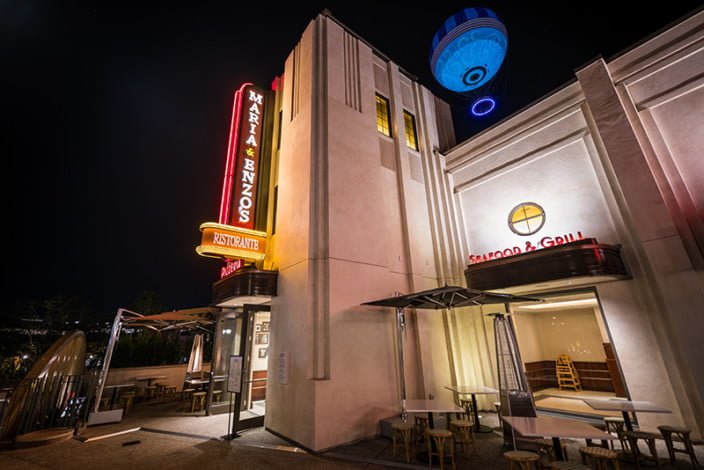 Pizza Ponte is a Disney Springs counter service restaurant serving Italian cuisine (in the form of pizza, sandwiches, and desserts) to Walt Disney World guests wanting a fast-casual alternative to Maria & Enzo’s Ristorante, the Edison, and Enzo’s Hideaway Tunnel Bar & Restaurant. In this post, we’ll share food photos, and discuss how our experience here compares to other pizza joints at Walt Disney World.

Historically, Walt Disney World’s pizza game has left a lot to be desired. At one point, about your only option was the type of frozen “Almost Pizza” offerings now found (exclusively) at PizzeRizzo. A new bar for pizza at Walt Disney World was set by Via Napoli, and lately, Blaze has been all the rage.

In terms of location and price, Blaze is the more obvious comparison for Pizza Ponte. While I like Blaze Pizza, I have to admit that I don’t quite get all of the hype. If you offer even mild criticism of this business, its fans react as if you’ve just kicked their dogs.

This type of customer loyalty is enviable, but at the end of the day, I think Blaze is still comparable to Subway or Chipotle. Now, we can quibble on the quality (and to its credit, the meat at Blaze is actual meat and consumption of their pizzas doesn’t require taking a Chipotlaway), but the idea is the same.

Blaze is build-your-own, assembly-line style pizza. It’s great because it’s convenient and made-to-order, but let’s not pretend this is the culinary paramount of pizza. Some comprises are necessary with this level of through-put and customization. For what it is, Blaze is an excellent option. However, this is not a review of Blaze… 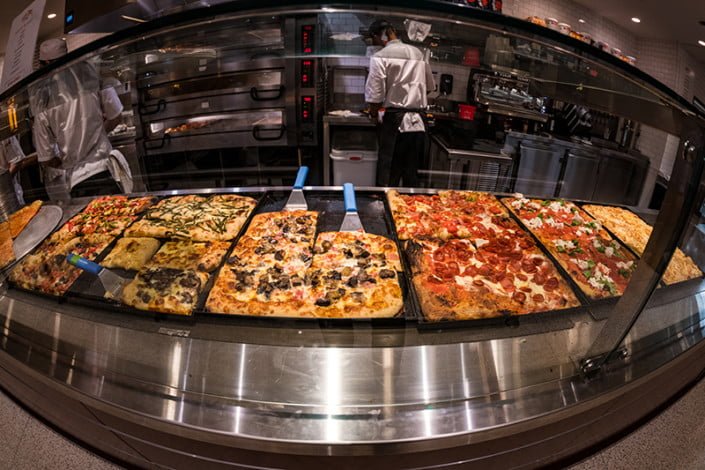 In terms of preparation, Pizza Ponte is not like Blaze. Rather, it’s more like Via Napoli. The heftier slices at Pizza Ponte take more time than the in-a-flash nature of Blaze, and there’s a nice light char on the underside of the Pizza Ponte crust that provides added texture and flavor.

Most notably, the slices at Pizza Ponte are not made to order. They come out of the oven, are placed under a heat lamp, and served upon a customer ordering. The relative freshness of a slice depends largely upon how busy Pizza Ponte is at any given time. (Making a line here a good thing.) 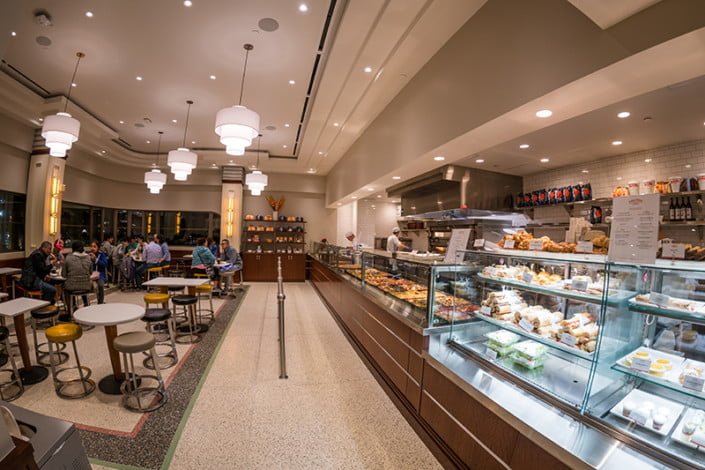 Every time we passed by Pizza Ponte, which was at least a half dozen times at Disney Springs, the line stretched almost to the front door. The night we dined at Pizza Ponte, the line was out the door (and this was around midnight!), which boded well for our slices. Someone who goes midday when there’s no line might have very different results with Pizza Ponte.

Before we get to the squares of pizza we had, it’s worth noting that today (February 9, 2018) Pizza Ponte is celebrating National Pizza Day with FREE squares:

Happy #nationalpizzaday from everyone here at Pizza Ponte! Celebrate National Pizza Day with us today from 11am to 2pm and get a free square slice of Roman-style Four Cheese or Pepperoni pizza when you purchase any cold beverage. pic.twitter.com/hS8AIdVorj

Since that probably won’t apply to most of you reading this, let’s move along… 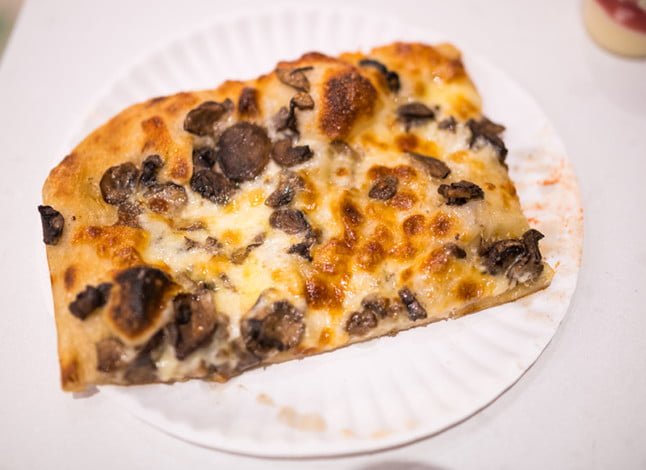 Both of the squares we tried were very good. The Forest Mushrooms Pizza had a liberal application of mushrooms, which were offered a nice earthy, savory flavor that balanced out the cheese oozing off of the slice.

All in all, this slice was a stark contrast to the minimally-topped pizzas at Blaze. 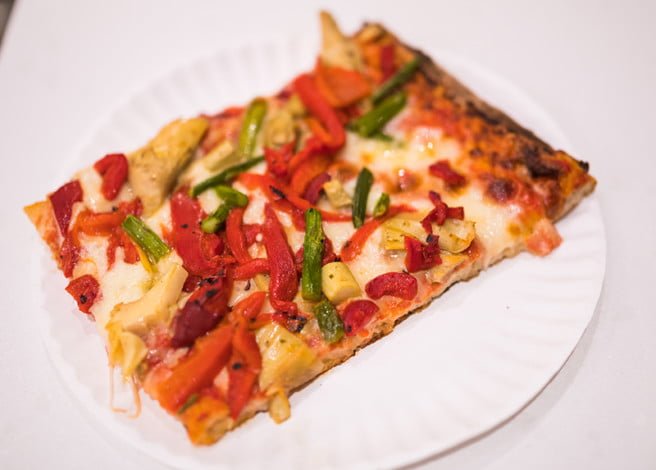 Sarah had the vegetable pizza (I’m not sure if that’s the actual name since it’s not listed on any menus), which she liked. The highlight for her was the artichokes, which work surprisingly well on pizza. Look no further than the Carciofi Pizza at Via Napoli for evidence of that.

Our experience at Pizza Ponte actually minded me a bit of a hole-in-the-wall pizza joint we used to frequent after nights at the bar in college. The kind of greasy operation serving hearty slices to soak up the alcohol. Given the hour and Pizza Ponte’s location adjacent to the Edison, I wouldn’t be surprised if it was serving the same purpose for Disney Springs guests that night. 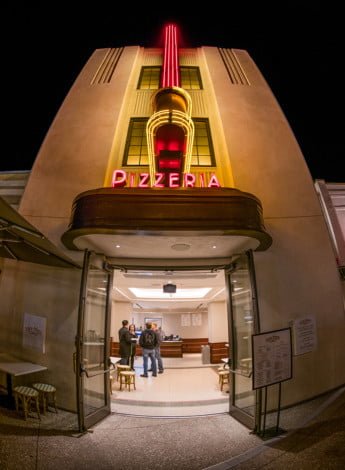 This isn’t exactly the highest of praise for Pizza Ponte; instead, it’s meant to serve as context. Pizza Ponte fulfills a role at Disney Springs for the late night crowd looking for a big slice of pizza dripping with creamy cheese.

Likewise, Blaze fulfills its own role, and is a lighter option that’s inexpensive and potentially good for sharing. My personal preference would normally lean in the direction of Pizza Ponte, but I could also see times when we’d prefer Blaze (say, wanting a light meal before catching a movie at the AMC–which we also did this trip). 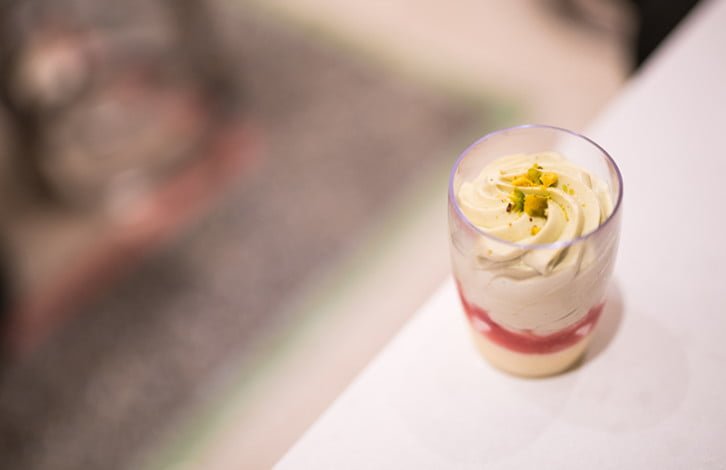 Finally, we had the Pistachio and Mascarpone Parfait. The combination of light pistachio and strawberry was interesting, but I’d say the latter was (overly) dominant. The mascarpone provided a creamy decadence. Sarah loved this dessert, but I would’ve appreciated a bit more variance in the textures.

While I am probably one of the few who does not consider the pizzas here overpriced (they’re deceptively filling) in light of Walt Disney World pricing, I did consider this dessert overpriced.

As we were finishing up, a fresh Tomato Pizza came out of the oven, and it looked glorious. We almost went back for seconds, but we were pretty well stuffed at that point, and probably would’ve slept until noon the next day if we had another slice that large. If you like mozzarella, the Tomato Pizza should definitely be on your radar, though.

Ultimately, pizza is one of those things about which everyone seems to have an aggressively strong opinion, and that will undoubtedly be the case with Pizza Ponte. We liked it. If thin, made-to-order pizzas are more your style, stick to Blaze. If you favor thicker, toppings-heavy slices, go with Pizza Ponte. If you’re a pizza snob, you should probably steer clear of both (or go to both, so you can boast about your knowledge of pizza and how, “these aren’t real pizza!” on the internet). We don’t think it’s the end-all, be-all pizza, but it’s also not an affront to Pizzaros, the Italian god of pizza.

What do you think of Pizza Ponte? Where does it rank in terms of pizza options at Walt Disney World for you? Have any favorite slices here? Is Pizza Ponte something that intrigues you? Any questions? Hearing your feedback about your experiences is both interesting to us and helpful to other readers, so please share your thoughts or questions below in the comments!