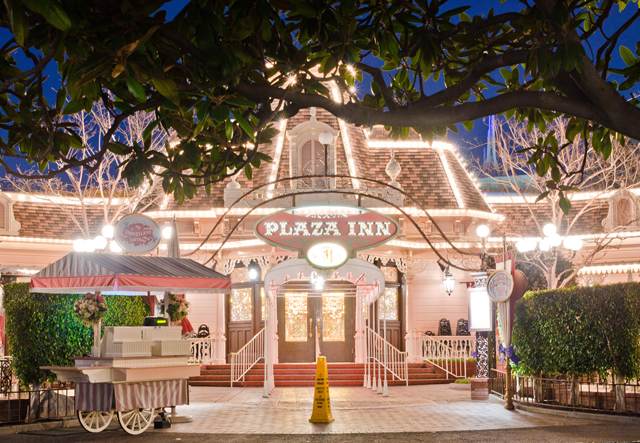 Plaza Inn is located on Main Street, USA in Disneyland, with inside and outdoor seating offering great views of Sleeping Beauty Castle. The lunch and dinner menu, which is what this review covers, is counter service and consists of American cuisine served cafeteria-style. The menu is somewhat small, with fried chicken, pot roast, pasta, and salad, plus desserts and prices that are on the high end of the counter service spectrum. Now that we have that description out of the way, on with our review.

But first, some words of wisdom…

A house divided against itself cannot stand.

~Abraham Lincoln Audio Animatronics, Hall of Presidents (he might have said this in real life too, who knows!) 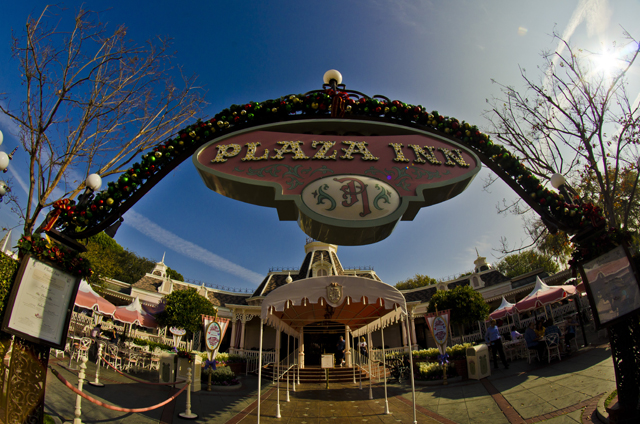 This line from Lincoln’s well-known and foreboding “House Divided” speech still rings true today in the realm of Disneyland dining. Sarah and I have starkly different opinions of Plaza Inn. Normally, I would terminate a friendship with anyone who had such a wrong opinion about a delicious house of fried chicken, but Sarah is pretty special, so our ‘house’ will persevere. 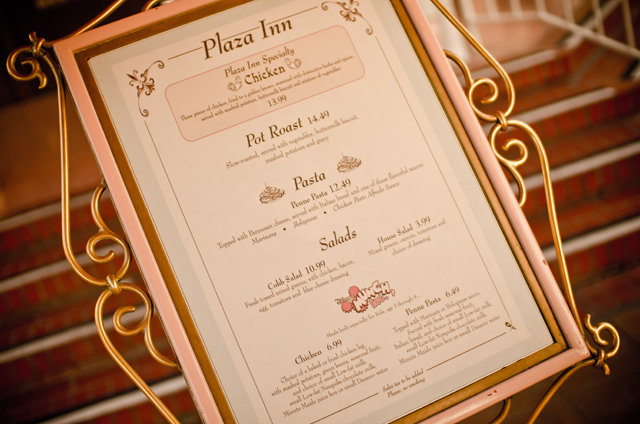 Before our differences of opinion, first, the common ground. The Plaza Inn is a beautiful restaurant with an old-timey Disneyland feel. This is probably partly because it’s a rather historic location in Disneyland. It was originally called the Red Wagon Inn, and has existed since opening day in 1955. The Red Wagon Inn was reportedly one of Walt Disney’s favorite dining spots in the park. 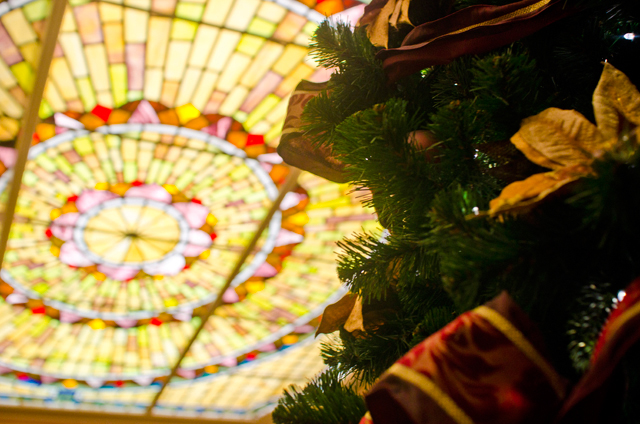 The Plaza Inn features authentic 19th-century furnishings, including the jewel-like Victorian stained glass and ornate woodwork salvaged from a grand old home in Los Angeles. Heck, even the soda fountain is made to fit the theme of the restaurant. We both found this theme to be executed wonderfully, and the understated and simply “pretty” look of the restaurant was a nice departure from some of the more lavishly-themed restaurants that attempt to execute a more fantastical theme. 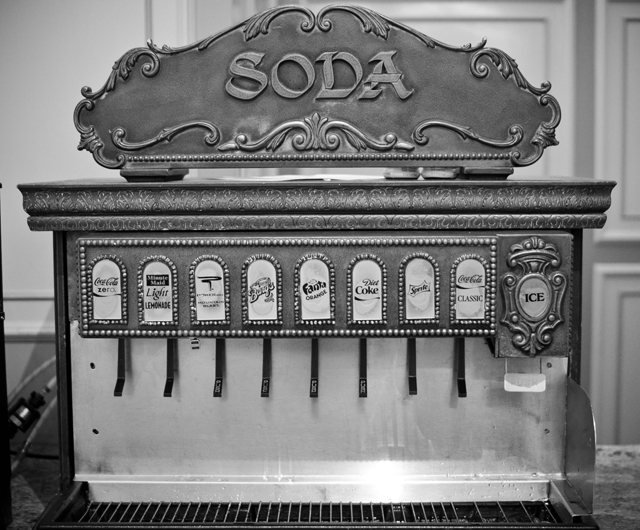 Now, the controversy. I found the food at Plaza Inn to be exceptional. It seems rather pricey at $11-15 for an entree, but that is a bit misleading. Once you see the gigantic portion sizes, you realize it’s actually one of the best values in Disneyland. I was shocked by how much fried chicken the server kept piling onto my plate. Speaking of that fried chicken…oh, what fabulous fried chicken it is. Some people turn their noses up to fried chicken and consider it all to be more or less the same. I don’t think this is even close to true. 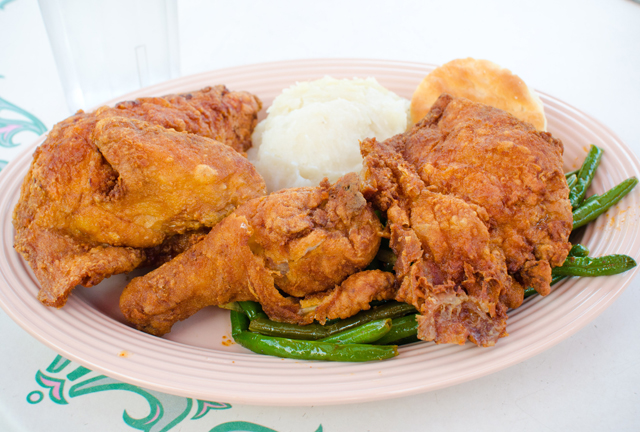 The amount of breading, texture, seasoning, consistency of breading, juiciness of the chicken, tenderness, and overall flavor, among other things, all determine whether fried chicken is okay, good, or great. Dismissing fried chicken out of hand because it’s “simple fried food” is about as silly, I think, as lumping all blockbuster films together because they’re not as intellectually stimulating as a (good) Woody Allen film. You should judge all things with a sense of perspective–obviously you don’t compare some fried chicken to artfully prepared Kobe Beef. That doesn’t mean they both aren’t good. 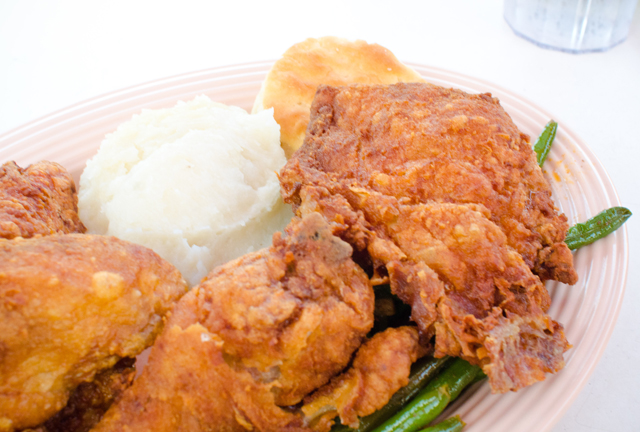 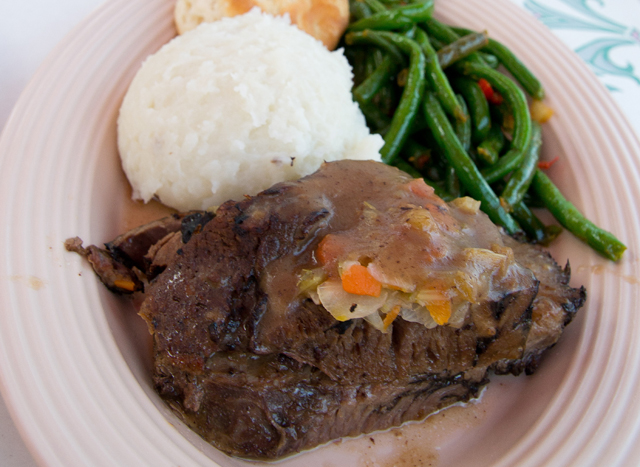 Since we didn’t share, Sarah ordered her own meal and opted for the Pot Roast. She thought it was dry and tough. I have to admit, I wasn’t overly impressed by it, but Sarah has the art of cooking pot roast down to a science, so everything pales in comparison to hers. Plus, with the taste of that miraculous fried chicken still lingering in my mouth, the pot roast didn’t stand much of a chance. On balance, it’s not something that I’d necessarily recommend, but I wouldn’t avoid it at all costs, either. It’s somewhere in the middle: a relatively average pot roast. Exactly what you’d expect at a counter service restaurant, I think. 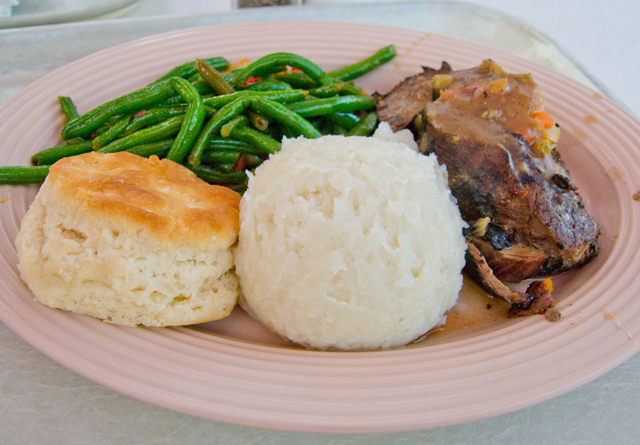 As for the sides, I think Sarah and I are in complete agreement here. The mashed potatoes tasted like they were prepared from a box, and looked like it too. They weren’t atrocious, but they weren’t very good, either. It seemed like the answer to their poor flavor was to throw some butter at them. Not altogether unexpected for comfort food, but still disappointing. The green beans and biscuit were much better, both having a really good flavor.

After seeing the portion sizes for the entrees, we opted against dessert for this meal. They all looked good and sizable, although some were expensive. Honestly, though, I don’t know if I can eat Plaza Inn dessert during non-holiday times of year. If you are going around Halloween or Christmas, you must purchase a Yule Log. Or three. The Yule Log is the stuff of legends at Disneyland, and for good reason. Not only is it delicious and beautifully crafted, but it’s reasonably priced relative to many smaller and pre-packaged desserts. If that doesn’t sway you, it was also highlighted as one of the top holiday desserts by Guy Fieri on the 2009 Food Network special, “Guy’s Disney Holiday.” Guy doesn’t just eat any crap-food he finds at random hole-in-the-wall dives (well, he sorta does, but whatever). If he liked it, you know it must be excellent. 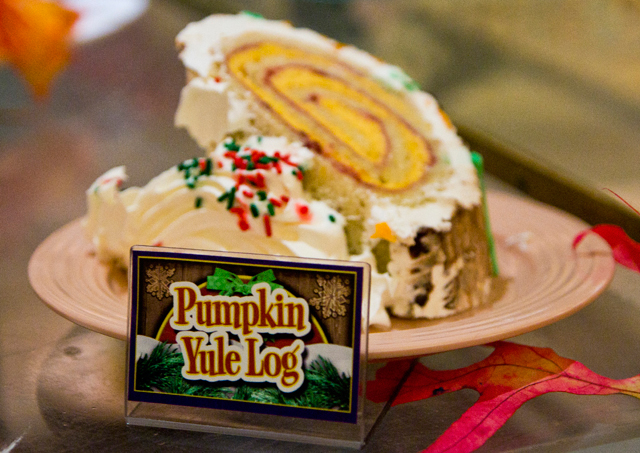 How does the Yule Log taste? Succinctly put, it is the culinary embodiment of “awesomeness.” It is wholly different than fruit cake; for some reason I thought the two were synonymous before I tasted this edible gem! It may come as no surprise for you to now learn that I am not a master-chef. Less succinctly put, the Yule Log is the perfect combination of sponge cake and cream, with rich pumpkin or chocolate mousse. None of the flavors overpowers or is too rich, meaning a single guest can easily conquer this entire largely-sized dessert. 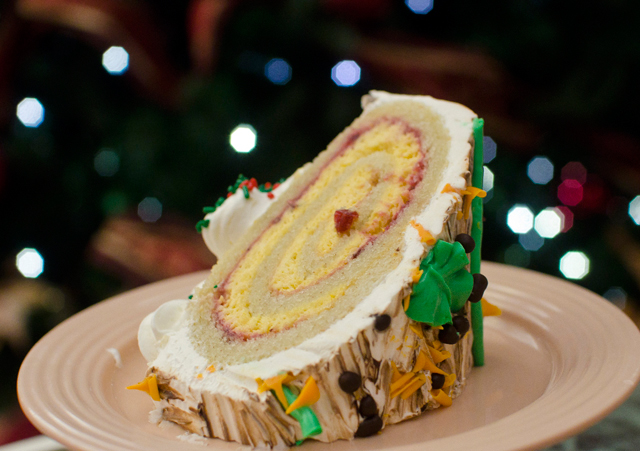 Overall, whether you will enjoy Plaza Inn at Disneyland comes down to whether you enjoy the simple pleasures of well-prepared comfort food and, more importantly, whether you like fried chicken. If you don’t enjoy either, it may not be your cup of tea. If you enjoy fried chicken, going to Plaza Inn is a no brainer. Note that the score below was arrived at in considering Sarah’s opinion and my opinion, and as a result, is lower than it would be if it were just my opinion (I’d give it a 10+/10).

I started the review with a quote from one of America’s great visionaries, so it’s fitting to end it with another:

It is unlike anything you have ever experienced, I assure you.

Do you agree with me that Plaza Inn fried chicken is a national treasure, or do you side with Sarah? What else do you like here? Share your thoughts in the comments!

To read other Disneyland restaurant reviews, check out our Disney Dining Reviews Index.