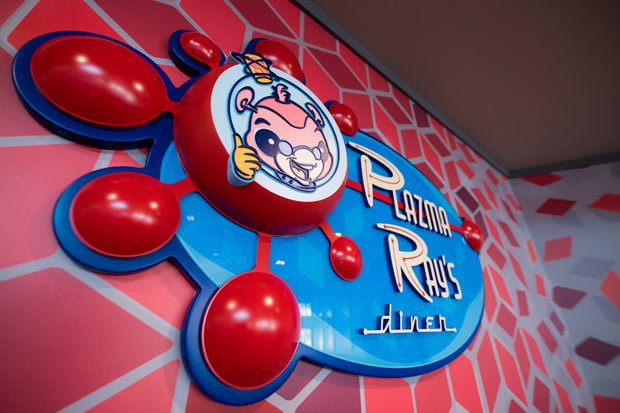 Plazma Ray’s Diner is a new counter service restaurant in Tomorrowland at Tokyo Disneyland with a mid-century modern/googie theme and outer-space decor. The menu features rice bowls and even vegetarian options, a rarity at Tokyo Disney Resort. In this review, we’ll share food photos, take a tour of this new dining spot, and offer thoughts on whether it’s worth eating here.

When it was first announced that Plazma Ray’s Diner would replace Plaza Restaurant (not to be confused with Plaza Pavilion, which is still open), I was excited. Given the similarity in name and concept to Cosmic Ray’s, I assumed Officer Zzzzyxxx, a Sonny Eclipse doppelgÃ¤nger, would make a reappearance after unceremoniously “retiring” from the Star Tours post-show.

While Plazma Ray’s certainly bears some similarities to Cosmic Ray’s at Walt Disney World, my assumption was incorrect. Beyond the cute pink alien who appears on the signage and a few posters scattered around the inside, there are no aliens at Plazma Ray’s. Nonetheless, it’s a nice little restaurant and a step in the right direction for Tokyo Disneyland…

The conversion to Plazma Ray’s Diner was more like an aesthetic refresh than a wholesale re-imagining. The layout is mostly the same, with the largest changes being a reconfiguration of seating, expansion of the outdoor terrace, stylistic enhancements, and changes to the color palette. In total, there’s probably about 50% more seating in the new incarnation of the restaurant.

While we loved the intimacy of the old terrace layout with views of Cinderella Castle, it was nearly impossible to snag a seat out there. If you didn’t arrive early or get really lucky, it wasn’t happening. Given the shortage of restaurant seating at Tokyo Disneyland, this expansion was necessary. 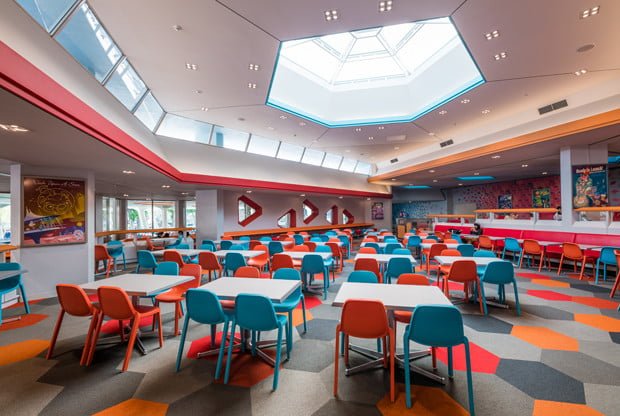 Otherwise, the biggest changes come in terms of a change in the color palette and the use of more geometric patterns in the design. Both are thoughtfully done and work really well in this location. The use of reds, orange, and blue evoke a retro vibe, while the use of shapes and patterns accentuate the mid-century modern architecture of the building. Together, these design choices evoke a sense of retro futurism.

While this works in the design, and is exactly the type of aesthetic refresh the rest of Tomorrowland needs, it’s not exactly groundbreaking in terms of themed design. It fits Tomorrowland well, but feels like the bare minimum was done in terms of the redesign. Although they’re completely different styles, Plazma Ray’s is not remotely on par with the likes of Grandma Sara’s or China Voyager in this regard. 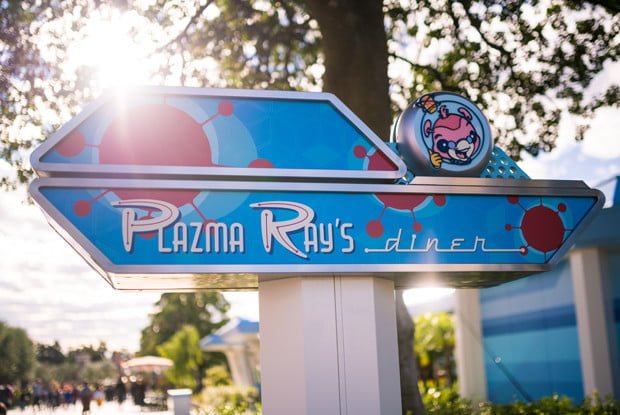 One nice touch that adds to Plazma Ray’s charm a bit is the poster throughout the restaurant. These feature some nice hidden references to Star Tours (and other parts of Tomorrowland I’m forgetting), and are generally done well. They also establish Plazma Ray’s as an intergalactic fast food franchise (a la Pan Galactic Pizza Port…what’s with restaurants in Tokyo Disneyland colonizing the galaxy?!).

In that context, I guess the more restrained theming makes sense. Tough to scale a fast food restaurant with ambitious design to multiple planets, especially with those slim margins. Alright, now let’s take a look at some of the rice bowls available at Plazma Ray’s Diner… 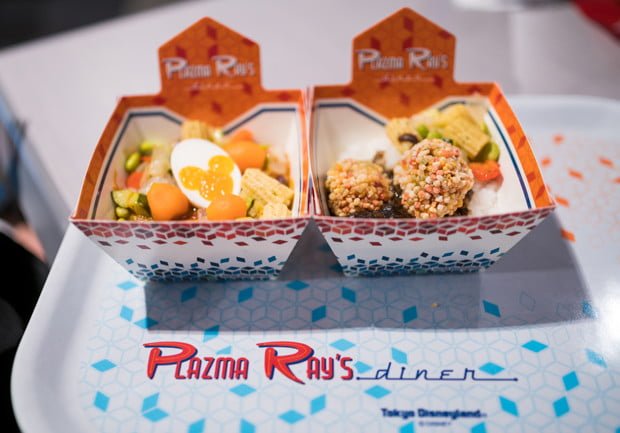 My favorite is the arare chicken. This is essentially a couple of pieces of fried chicken texturized with little balls. The chicken was excellent–tender and juicy–but I could’ve eaten about 12 pieces. Fortunately, the rice and vegetables provide some nice filler.

Pro tip: whenever you get the chance to have fried chicken in Japan, do it. This country is serious about its fried chicken, and I’ve yet to have a bad piece of it in Japan. From 7-11 to random ramen joints, it’s all good. 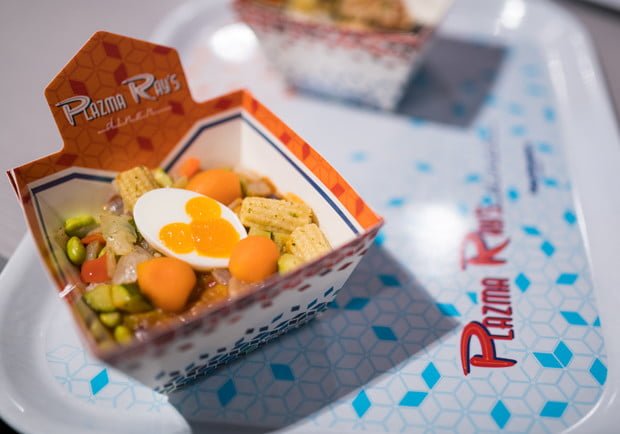 Sarah’s go-to is the vegetable curry with egg. She likes the way the vegetables are prepared–the sweet spot between raw and too soft–and she likes the lighter nature of the dish. Plus, it’s one of the few vegetarian options at Tokyo Disneyland.

Personally, I think there might be an ulterior motive at play: Sarah wants that cute Mickey Mouse egg for Instagram’ing purposes. 😉 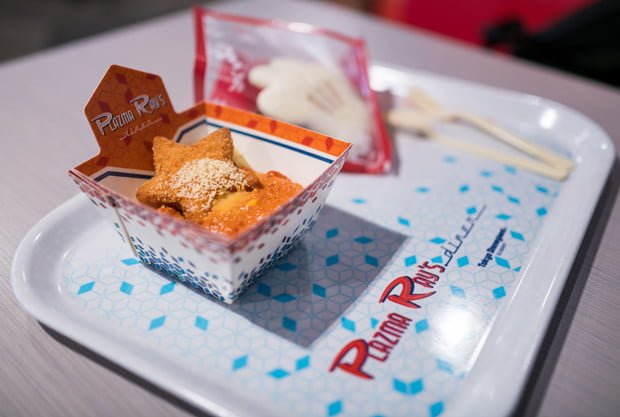 Our friend Guy Selga of TouringPlans.com ordered the shrimp cutlet. He liked this, but agreed that the chicken was better. I’d definitely be down with combining the tomato-cream sauce from this bowl with the chicken, though!

I’d be curious to see how this one stacks up to the meat patty version. I’m not a huge fan of Tokyo’s meat patties (they’re basically meatloaf), but it looks like a hearty dish.

Another tip is to grab food from Plazma Ray’s Diner and eat it over at Pan Galactic Pizza Port to enjoy future Disney Legend Tony Solaroni’s inspiring performance. We did this a few times because I absolutely love the Star Wars curry calzone at Pan Galactic, and Sarah’s a big fan of the healthier vegetable curry. 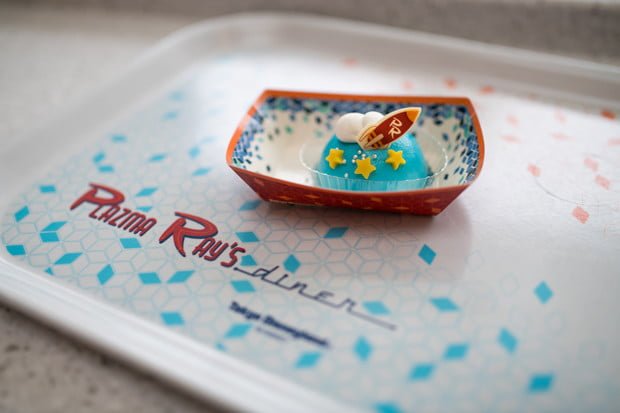 Finally, there’s the blue mousse cake. This reminded me a bit of Blue Hawaiian soda I get in Japan. There’s not really a single, distinct flavor, just a mix of quasi-fruit flavors in a delicious blue concoction. However unappetizing that might sound, it’s actually quite delicious.

The downside here is that this excellent dessert is really small for the price. It’s half the cost of a rice bowl, which is just too much when you consider what you’re getting. I’d definitely do it again if the cake were about 50% larger.

The cuisine is another regard that’s a step forward for Tokyo Disneyland, namely the vegetarian option. When we first started covering Tokyo Disney Resort, vegetarian options were not a thing. We advised people to either dine at buffets (still the best option) or order something with meat and then remove the meat components (an imperfect solution, but requesting substitutions is like pulling teeth).

While a lack of vegetarian options is meaningless to me personally, it’s nice to see small strides being made towards doing a better job of catering to vegetarians. It’s always felt a bit odd that the Disney resort with far and away the best service has been the worst in terms of accommodating dietary restrictions and preferences. On our most recent visit, we noticed a few restaurants in Kyoto advertising that they have “vegetarian menus” outside, so I’m guessing this is a trend in Japan that extends beyond the parks.

Overall, Plazma Ray’s Diner serves good food with satisfying portion sizes in a pleasant environment. Food-wise, it’s the most ambitious option in Tomorrowland. (Not a high bar, but still.) Theme-wise, it doesn’t hold a candle to the Tony Solaroni-helmed Pan Galactic Pizza Port. As a band-aid to create a more cohesive style for Tomorrowland, it does the trick, but hopefully something more ambitious is in the cards as part of a future, wholesale makeover of Tomorrowland at Tokyo Disneyland.

If you’re thinking of visiting Japan for the first time and are overwhelmed with planning, definitely check out our Tokyo Disney Resort Planning Guide. It covers much more than the parks, from getting there to WiFi to currency and much, much more. For more photos and an idea of what we did day-by-day during our first visit, read our Tokyo Disney Resort Trip Report (that should be helpful if you’re planning a first visit of your own).

What do you think of Plazma Ray’s Diner? Where does it rank in terms of dining at Tokyo Disneyland for you? Have any menu recommendations here? Any questions? Hearing from readers is half the fun, so please share your thoughts in the comments!